Why I could never own an LCS 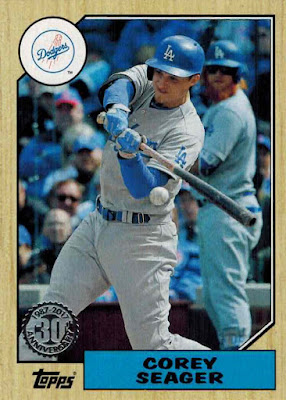 I got to spend a thrilling afternoon at the DMV today -- my driver's license was up for renewal.

Anyone who's ever been to the DMV could understand why I wanted to enjoy a little me-time the second I walked out those doors. Luckily, I was only a short trip away from my favorite bookstore, which in turn is right across the street from the LCS I sometimes frequent. (Throw in a Wendy's and you'd have the greatest half-block in America.)

With a bag of books in hand, I ran across the street to the LCS, where I was surprised to see a mother and son standing at the counter talking to the owner (the place is usually empty when I go on a weekday). I listened to their conversation as I began to flip through the shop's dollar bins, and it didn't take me long to realize what was going on.

Sorry ma'am, these cards aren't worth anything...late '80s and early '90s...the binder's more valuable than the cards are...they made so much of them... 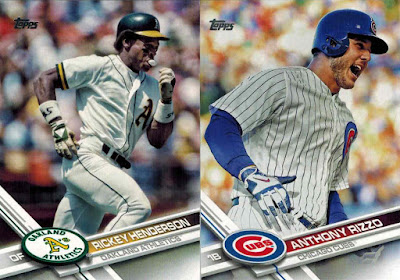 I knew this sort of thing happened all the time at card shops, but I'd never actually seen it first-hand before: a person trying to sell their (or, in this case, their son's) old card collection, figuring it'd be worth big bucks for the age of it alone.

The woman, to her credit, received the news fairly well, but she was obviously disappointed and asked several times if the LCS owner was sure of his appraisal. He was (so was I, and so were you).

She and her son walked out the doors still clutching the binder of lost fortunes. 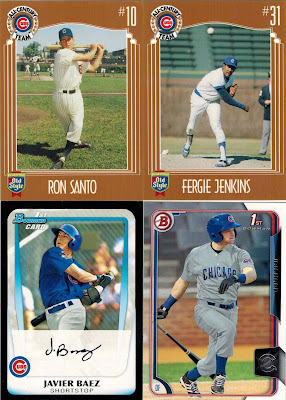 I admit, I've long had a fantasy of owning a card shop (like many collectors, I'm sure) but fact is that such dreams often leave out the painful reality of what it would actually be like.

I can't imagine how many dreams have been crushed by LCS owners since the collapse of overproduction-era cardboard. You and I both know that 1990 Donruss is essentially worthless, but the everyday person who finds cards in their attic or had a son who collected or who heard cards were valuable now (etc.) doesn't, and it'd be tough to bring myself to tell them day in and day out.

And today I saw why, even if it were financially and commercially viable (which chances are it never will be, of course), I could probably never own a card shop. 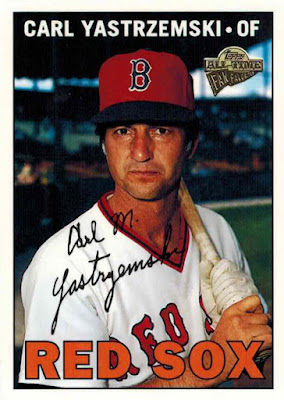 After the mother and son left, I asked the store owner how often things like what I'd just seen happened -- he said, and I quote: All the time.

While it seemed like a lot longer, I was only in the LCS for about ten minutes. Everything you've seen in this post came from the dollar boxes. Some (like this Yaz) were cards I could probably find much cheaper but too cool to pass up in the moment, while others (like the Rickey and Rizzo Update SPs) were actually steals at a buck.

But the cards themselves were really secondary to this particular trip to the LCS. Having been in the hobby for as long as I have, it's easy to get complacent in the great little bubble that we collectors inhabit. Every once in a while, it helps to see something like I saw at the LCS today, just to remind myself that there's a whole underside of the hobby that we don't often have to deal with.

Either way, it sure beats the DMV.
Posted by Nick at 6:35 PM

I've had to tell a number of friends the same thing when they find out I collect. "Oh I've got a ton of stuff from the 80's and 90's. Any idea what it's worth?" But I've also been where you were in an LCS when someone walks in with a box or binder looking to sell and the owner has to break the news to them. I've also seen it happen with a lot of comic book collections that were put together from the early to mid-90's the hey day for comic speculation.

My LCS has a sign on the front door that says, "We cannot buy anything from the '80s and '90s. No exceptions." They must have gotten tired of saying it.

A couple things related to your card shop encounter:

1. My first job was in a baseball card shop back in the early 2000s. Every so often, we would have people come in with boxes or binder of stuff from the late 80s and early 90s and the shop owner would look at the cards and always politely tell the people who came in "sorry, I really can't use these". The next question always was "well, what can I do with them?". It was always recommended that they go donate them to the Salvation Army store across the street.

2. Just recently, one of the managers at my night job saw me writing during some down time one night. He asked what I was writing about, I told him "baseball cards." He said "oh, I have some cards from then, do you know what they are?" Eventually, we figured out that he was talking about a 1992 Topps set he got as a kid. I had to break the news to him that there was very little value in it at all.

Folks...Nick's grandma STILL thinks the '84 Padres cards she gave to Nick are worth a fortune...despite years of us trying to convince her otherwise!

The funny thing is that I've had this crazy idea for a while where i take a bunch of junk wax that's worthless in the US and bring it all over to Japan where it's a scarcer. There isn't a particular demand for it, but unlike here where you're going to struggle to find even card collectors who'd want it, it makes for interest gifts to my collecting buds overseas who'd rather not have to deal with immense shipping fees for a worthless card.

We get on average probably 15-20 calls a week about this, at the least. And multiple collections each week walking in through the door with 80s and 90s junk.

When I was in college a friend of mine owned a small card shop and just about everyday someone would walk in and say "I would like to sell these." 9 out of 10 were junk wax era collections. This was the early 2000's.

My most recent example boggled my mind even more. I was in Providence RI for work last year and found an area card shop. Sure enough someone walks in with an SUV full of cards and action figures. Sure enough the owner of the shop had to tell the person that it probably cost more for you to drive here than what the contents of the SUV was worth. She seemed devastated. The owner of this shop was polite, but very direct. He said he still gets calls everyday and people coming in multiple times a week.

I find the last one interesting because so much information is online. One quick google search and the person could have saved a trip. I guess people like the confirmation. The early's 2000's example is a little more forgivable since eBay was in its infancy.

Not sure who has more "I hate my job" employees... the USPS (just the cashiers, not the actual mail carriers) or the cashiers at the DMV. From my experience, I'd guess that only 20 to 40% actually smile at my locations.

As for the being the bearer of bad news... I worked at a card shop back in the late 90's... and people would come in with late 80's and early 90's stuff all of the time, so I've been in that card shop employee's shoes.

Definitely a tough scenario. I've known plenty of folks have cards stashed, and knowing I collect will ask what they are worth. Inevitably it is always a letdown. I too have been disappointed by what I've been offered for cards I"m selling but being in the hobby I've braced myself for worst case scenarios.

I would not have enjoyed the scene you described. I don't like seeing people being disappointed. It wasn't their fault - just circumstances. I agree folks can use the internet to find information nowadays but if you aren't active in the hobby it can be pretty intimidating.

On to something more cheerful. Great Yaz card!