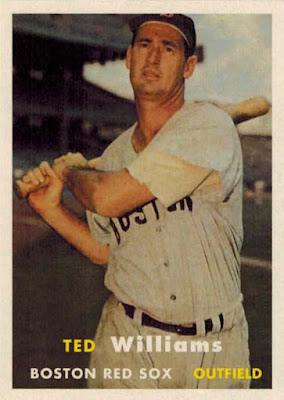 My birthday is coming up on Monday, and even though I don't celebrate it as much as I once did, I still took the next few days off work to commemorate the event.

The main reason for this mini-vacation is that I'm treating myself to a card show tomorrow afternoon as a birthday present to myself. A couple of my coworkers are baseball fans, and after I told them I was heading to a show this weekend, a couple of them asked me what specific cards I was looking for.

Really I don't have any set goals in mind for tomorrow -- hitting one of my "Keep Dreaming" wants would be ideal, I suppose. In a perfect world, I might even knock out one of the bigger suspects like, oh, this '57 Ted Williams I've been dreaming about for years now. Chances are I probably won't find it (at least not at a price I can afford) but, like most card shows, you just never know...

In the meantime, I thought it'd be fun to comb through my Top Five cards of Teddy Ballgame on the blog today. 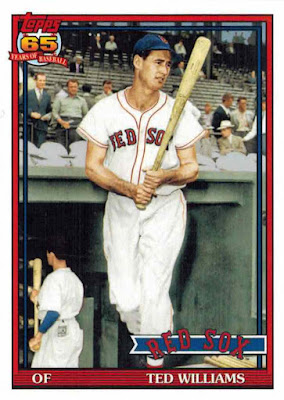 One of the better examples of just how well-done the '91s were in 2016 Archives. 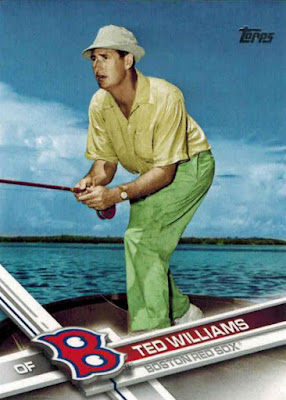 I didn't mention it on the blog at the time, but I did go out and buy one of the much-discussed Williams SPs from last year's Update.

Though the ubiquity of them watered down the usual joy I get from Update, I had absolutely no qualms about the short-prints themselves -- many are absolutely fantastic, including this one of Williams out on the waters.

Strange as it is, it's still a somewhat fitting image: Teddy Ballgame was actually a prolific fisherman in his day, once catching a 1,235-pound marlin(!) in Peru. 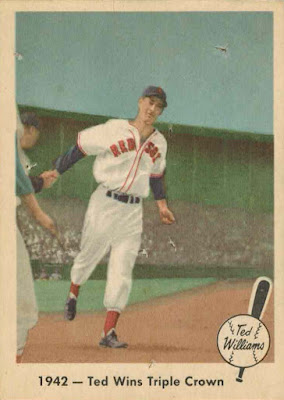 I received this one in a forum trade when I was first getting back into baseball cards many years ago, and at the time I specifically remember thinking: Wow, I have a REAL Ted Williams!

I'd later find out that these '59 Fleer Ted Williams singles are fairly cheap and not at all hard to come by (I've since acquired a few more), but even knowing that now, the thrill of getting that first one has never quite worn off. 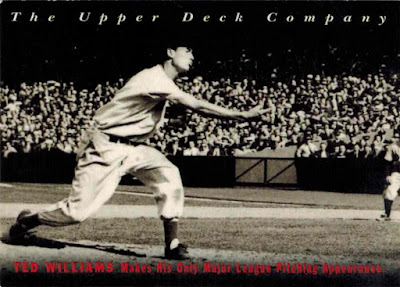 My first thought whenever I see this one: Oh my god, it's Ted Williams PITCHING!

I've viewed this card a countless number of times since I first got it years and years ago -- the only one I've ever seen commemorating Ted's lone big-league pitching appearance on August 24th, 1940 -- and yet I can still feel that sense of excitement run through me whenever I pass it in my Red Sox binder. 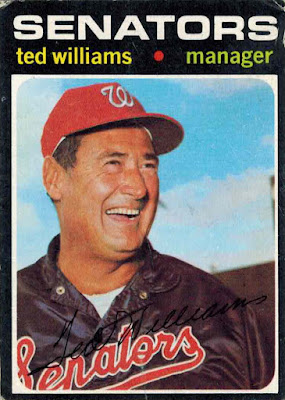 My top pick for Teddy is kinda out of left field (quite literally, in his case): his '71 Topps Senators manager card remains my all-time favorite.

This is one of those rare items that unleashes a funnel of memories whenever I see it. I purchased the elder Williams (with allowance money) from the legendary card shop I used to frequent in my youth (long since closed) following a daytime bus ride with my dad (on a route that no longer runs). It's been a cornerstone of my collection ever since.

I don't know where my card collection will be decades from now -- all I know is that, no matter what, I'll still be able to perfectly picture that smile, slightly off-center and cocked to the left.
Posted by Nick at 5:08 PM

I love that 57 Williams, good luck one finding one at the show.

Nice selection of Teddys Nick. He is one of my Pc guys.

Great cards. Williams played his last MLB game more than a decade before I was born, so outside of a few highlight reels, I never got a chance to see him play. But his reputation and legacy make him an American hero, which is why I cherish every baseball card of his I come across.

I've never seen that card of Ted Williams pitching. That's really neat. The fishing SP is cool, too. (holy cow that's a big fish!)
Someday I'm going to track down a copy of Ted's 1975 SSPC card-it's the only card I've seen of him in a Texas Rangers uniform.