COMC blasters, or the benefits of buying cards after work 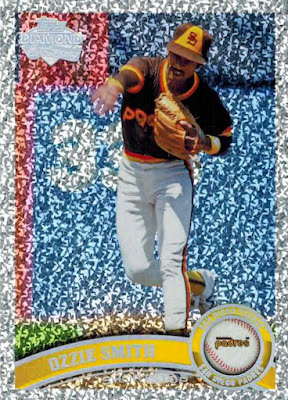 In what has quickly become a routine event in my life, I recently pulled the trigger on another hand-picked batch of COMC goodies.

The cards I bought cost me a little less than two retail blasters, which (no matter the product) I can assure you would be wildly inferior to the stuff you can find on COMC for the same price, and are a whole lot more fun to purchase.

This is why I'm now a full-fledged COMC addict: for the fun of it. Most of the cards I've purchased from the site were discovered and pounced upon in the wee hours of the night after I'd returned home from a shift at work. Because I've found few better ways to wind down than via long patrols through the COMC inventory.

And my god, the cards you find. 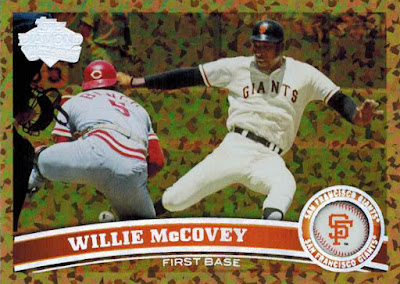 I'm still shocked at how cheap these were (less than a dollar each!), and I can't help but wonder if this play-at-the-plate photo on the McCovey liquorfractor was taken during the same game as his '73 Topps card, which also features a Johnny Bench cameo. 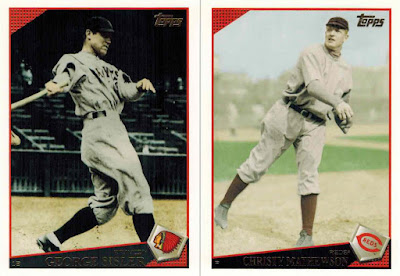 More Flagship legends, this time in the form of a couple short-prints from 2009 Topps Update.

The Mathewson in particular stands as a huge coup for me since it's only the second card I own to feature his one-game stint as a Cincinnati Red. 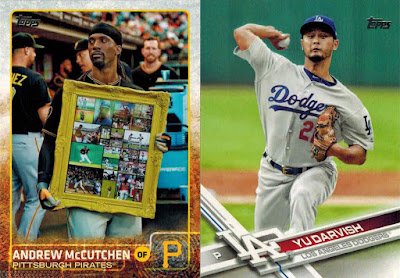 More Flagship SPs, though this time with a couple more modern greats.

I'm forced to eat my words a bit with the Darvish -- I still think it's insanely stupid to short-print an updated card in Update...but it was priced for loose change and I don't know how many cards he'll have as a Dodger at this point. 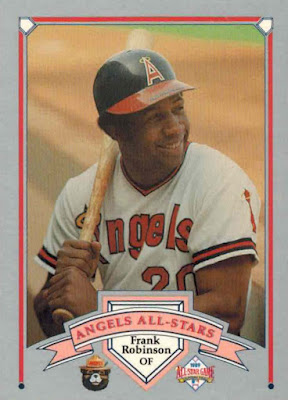 Flagship parallels, SPs, and what-have-yous are fine and good, but it's the oddballs that keep me coming back to COMC.

Perhaps the greatest thing about the site is that they have scores of regional oddities -- mostly West Coast issues -- that I have about a 1 percent chance of otherwise finding here in the bitter cold of the Midwest.

Case in point: this Smokey the Bear oddball which features a rare shot of Frank Robinson as a California Angel. 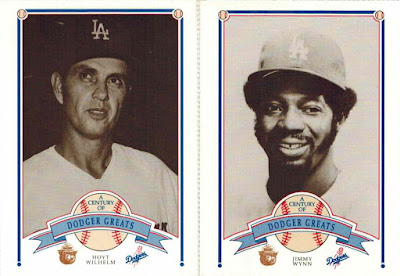 Smokey the Bear was a nationwide phenomenon, and yet (as far as I know) only the West Coasters received cards courtesy of their fire-fighting friend.

That doesn't seem fair -- especially when those cards include scarce Dodger sightings of The Toy Cannon and HOYT HIMSELF! 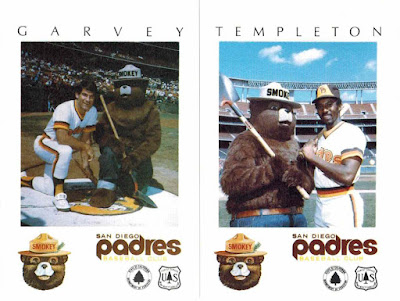 One Smokey the Bear set led to another, and that's how I wound up with these -- which I'll let speak for themselves for now. 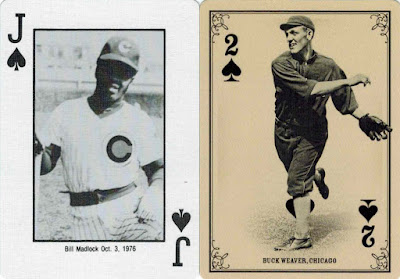 Playing card-themed oddballs of a couple hometown greats, though the back of the Madlock may be even better than the front. 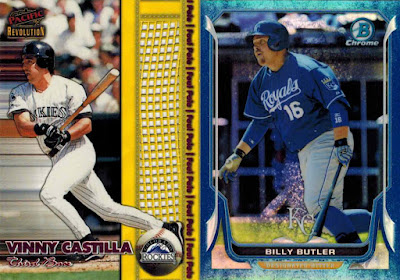 Here's a couple more modern curiosities that could be classified as oddballs, though I'm admittedly a bit disappointed by the Castilla -- I was under the impression that it included real, foul-poleish mesh, but mine (or at least this particular one) contains a purely lookalike material made of standard cardboard. (Still a fun Pacific invention, though.)

I discovered the beauty of Bowman Bubble Refractors from Shoebox Shane (from whom the whole COMC Blaster idea I also borrowed in the first place), and luckily for me, the cheapest one on the site happened to be a guy I collect: Billy Butler.

And now I can say with utmost certainty that the bubbles are indeed all they're cracked up to be. 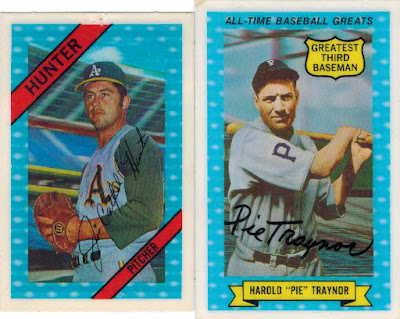 Ah, but a discussion of oddballs isn't complete without an appearance from our friends at Kellogg's, of course. 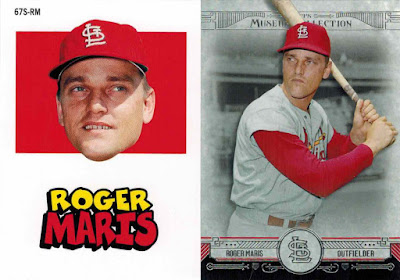 Any given post-work COMC run is bound to follow any given trajectory, and I got on a Short Term Stops kick during one of my many nighttime searches.

Hard to pass up anything of Roger Maris as a Cardinal for loose change (especially floating heads!). 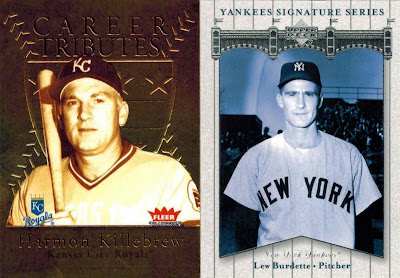 The Burdette arrived just in time to make it into last month's Yankees Short Term Stops post, a team for which ol' Lew pitched exactly two games in 1950.

The Killebrew is a shocking discovery -- I had long been under the impression that his only Royals card came in '76 SSPC. Nope: turns out Killer had another one out there from a Fleer Tradition insert set no one remembers this whole time. 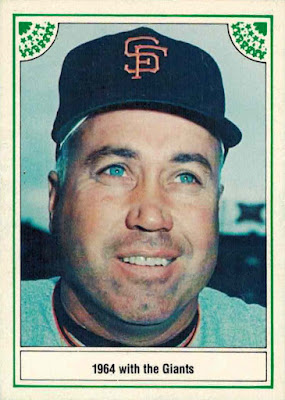 ...here's something else I didn't think existed: a card of Duke Snider on the Giants!

Dodger fans can deny it all they want, but it's true -- The Duke did spend his sunset season with the hated crosstown rivals. He hit .210 with four homers (the last of his 407 total dingers) for the '64 Giants in what was an unspectacular finish to a Hall of Fame career.

The card in question comes from the 1983 ASA checklist, an umbrella brand responsible for a handful of single-player sets (including Duke) and one I actually know well: it was a central player in one of the better days I've ever had at the flea market. And yet to think this long awaited card had been sitting under my nose the whole time.

So here's to COMC, a place that manages to transform those sleepy, semi-conscious post-work hours into something actually productive.
Posted by Nick at 5:51 PM

You found some neat Short-Term Stops oddballs and rarities. COMC's selection is unbelievable. I spend hours on that site every day. It's an addiction for sure.

The COMC blaster concept is one of my favorites on the blogosphere. I have one on deck for my blog..might wait until next week to post it now. :)

For me COMC has always been perfect for cheap inserts/parallels/relics. I probably don't use it enough.

Great finds on the sp's.

Nice finds Nick! You did a great job describing exactly why COMC is just so addicting. Glad you finally landed a Bubbles Refractor, they're fantastic if you like shiny cardboard. A thoroughly enjoyable post!

I agree so much -- I've been spending a lot of time at COMC the last few months. My post today had six cards from my latest shipment.

Solid COMC haul! Like Mike... my favorites are the Kellogg's. But the Smokey the Bear Padres are pretty cool too.