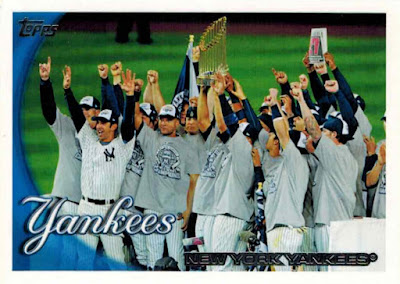 And so we've come to the end: the Yankees are the final team I've yet to feature in this "Short Term Stops" series (though this won't be the last post in the theme).

It's difficult to be a baseball fan and not have any opinions towards the Evil Empire. They're probably the most successful franchise in sports history, and it seems to me you either love them or hate them. This is one major area where my dad and I differ -- he's a huge Yankees fan, while I most assuredly am not.

But I'd be lying if I said I didn't have a begrudging respect for the 27-time World Champion Bronx Bombers, and like any team with such a rich history, they've managed to assemble quite a Short Term Stops roster over the years. 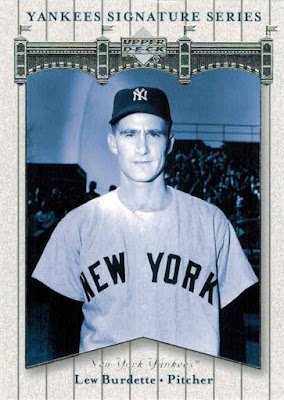 This one was actually part of a COMC order I received just a couple weeks ago, so expect to see it again on the blog in the near future.

For now, bask in the glory of the only card I've ever seen of Lew Burdette on the Yankees, a team he spent exactly two games with as as a rookie in 1950, appearing in all of one-and-a-third innings in a brief cup of coffee before being dealt to the Braves the following offseason. 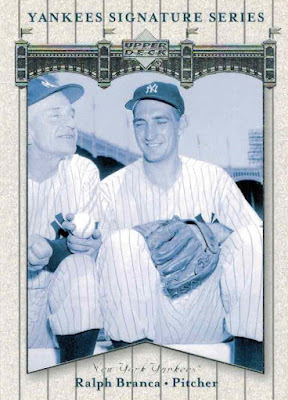 The Yankees are such a powerhouse that they've had several major-brand sets devoted entirely to the history of their franchise.

While I'm not sure how I feel about these all-Yankee checklists, they have come in handy with producing some of the only cards I've seen of certain greats in the famous pinstripes, such as the aforementioned Lew Burdette and Ralph Branca here.

I wouldn't have faulted anyone if Branca's quick five-game trial with the '54 Yankees went undocumented on cardboard, but in this case, I'm glad such a Yankee-heavy set exists to preserve what is an entirely forgotten stint. 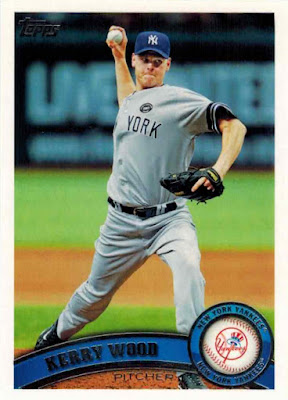 At this point, Kerry Wood is probably as close as I've seen to a Cubs icon in my baseball lifetime, and given that, he looks obscene in anything other than a Cubs jersey.

I've tried to push Wood's non-Chicago years out of my memory, but fact is he did spend a couple of his later seasons outside of the Windy City, including a short 24-game stint with the 2010 Yankees where he arrived via a trade-deadline deal from Cleveland.

Though Wood was actually quite good as a Yankee -- he posted a 0.69 ERA during his half-season in the Bronx -- it's for the good of baseball that he returned to the Cubs to finish his career. 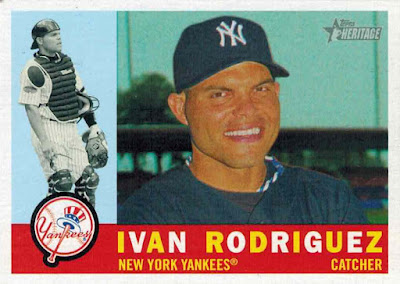 Ivan Rodriguez, like many great players, probably held on a bit too long and, as a result, jumped around in his later years.

One of his late-career stops came with the Yankees -- he appeared in 33 games with the Bombers at the tail end of the '08 season, hitting just .219 with two homers during his forgettable stint in the Bronx.

Pugde's a Hall of Famer now, and Short Term Stop lovers like myself will forever rejoice at seeing New York, AL on his Cooperstown plaque. 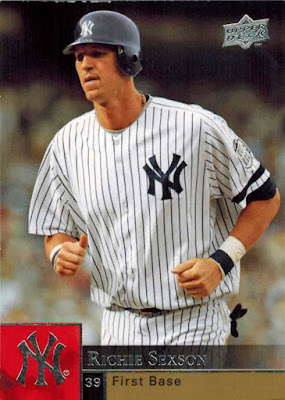 Richie Sexson might be the least discussed member of baseball's 300-HR club.

Despite his 306 career dingers -- including two seasons of 40-plus -- you don't hear much about Sexson these days, and surely few people remember that he finished up with the Yankees in 2008. After having been released by the Mariners in July, Sexson went to the Bronx to play out the final 22 games of the season, posting a .250 average and hitting the last of his 306 career homers in the process.

This is the only card I know of to feature Sexson as a Yankee, and it's one of my favorites from late-era Upper Deck as a result. 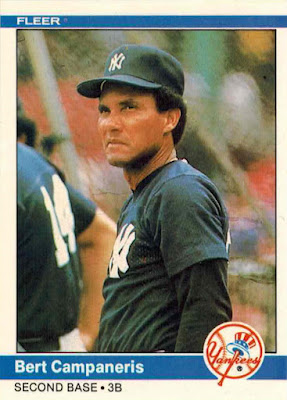 Billy Martin, then managing the Tigers, once had to be restrained from going at Bert Campaneris after Campy threw his bat at Tiger pitcher Lerrin LaGrow.

In an ironic twist of fate, Campaneris would end up finishing his career eleven years later playing under none other than...Billy Martin. After having spent the previous season in the Mexican League, Campy closed things out with the Yankees in '83, hitting a sparkling .322 in 60 games as a reserve infielder.

Funny how the history of baseball works itself out sometimes. 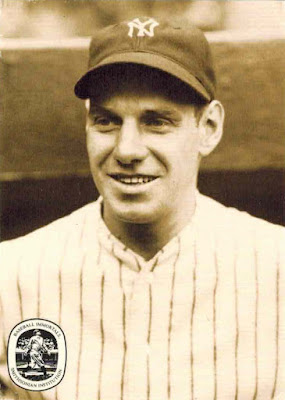 In terms of games played, I don't have a great nominee in my binders for the shortstop position on this squad -- but in terms of unfamiliarity, Leo the Lip here certainly fits the bill.

This is the only card I have of Durocher as a Yankee, and had I not owned it, I doubt I would've known that young Leo broke into the big leagues as a Yankee infielder in the mid '20s.

It's a stint made all the more strange given that Leo would later enjoy managerial fame with the Dodgers and Giants, both of whom were crosstown rivals of the Yankees at the time. 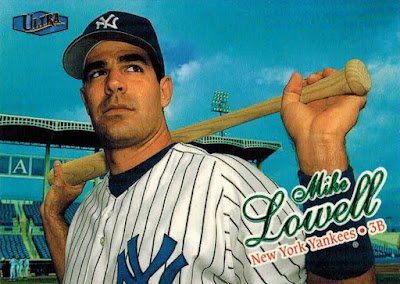 Even the greatest teams in history are bound to screw up.

I don't know if a team has enjoyed more sustained success in my baseball lifetime than the three-peat Yankees squads of the late '90s. And they very could've had a young Mike Lowell manning third base soon after were it not for a disaster of a trade that sent Lowell to the Marlins for peanuts.

Lowell was brought up for a cup of coffee with the Yankees in '98, collecting four hits in eight games with the club, but one wonders what he might've done in the pinstripes had he been given more of a chance. 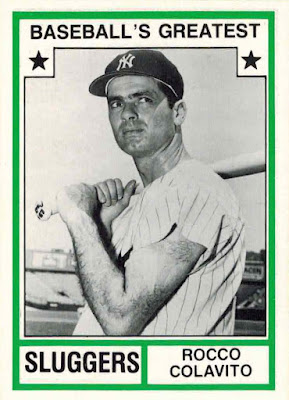 Rocky Colavito isn't much remembered as a Yankee these days -- he hit the last five of his 374 career homers in the Bronx during his sunset season in '68, which he split between the Dodgers and Yankees.

If there was anything notable about Rocky's brief time in the Bronx, it's that he actually collected a win in a pitching appearance during a game against the Tigers in which the Yankees came back from a late 5-1 deficit to win, 6-5.

Colavito held down the fort with two-and-two-thirds innings of scoreless ball, and would become the last position player to earn a win until Brent Mayne did it with the Rockies in 2000. 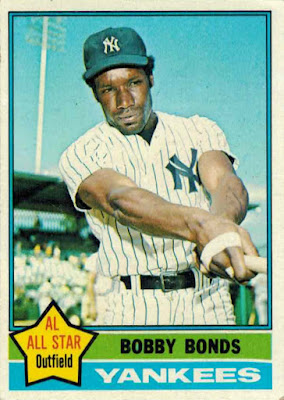 This is one of many classic cards from the 1970s, and it almost overshadows the fact that Bobby Bonds only played a single season with the Yankees.

The elder Bonds was a great player that, for whatever reason, could never seem to find a permanent home. Though his 32-homer, 30-steal season made him an All-Star in '75, the Yankees dealt him to the Angels the following offseason, and Bonds would wind up playing for seven different teams during the final seven years of his career.

In terms of pure aesthetics, this is easily one of the best cards in Short Term Stops history. 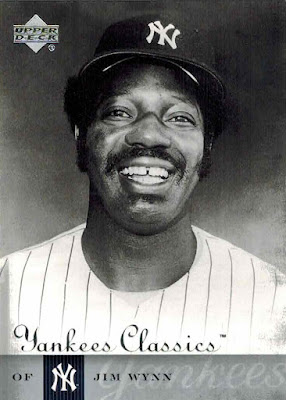 And just when you thought it was over, here it is: another all-Yankees set -- but again, though, this one documents a handful of forgotten sights in the franchise's history, including the brief 30-game stint of the Toy Cannon himself, Jim Wynn.

Wynn hit just .143 as a Yankee before being released and signed by the Brewers, where he'd finish the season and his career. Wynn's crowning moment in the Bronx probably came when he held back Reggie Jackson from going after Billy Martin during the infamous Fenway dustup.

Until Mr. Shlabotnik told me otherwise, I thought this was the only Yankee card of the Toy Cannon, and until I started researching this post, I thought for sure there were no Brewers cards of Wynn (into the COMC cart that one goes!). 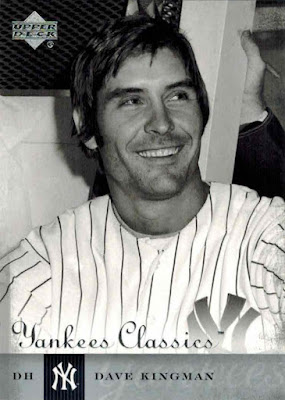 Kingman closed out his four-team whirlwind by appearing in eight games with the Bombers, belting four of the 20 homers he'd hit that year during his brief run in the Bronx to cap off an infamously historic season.

And there you have it: the last and final Short Term Stops roster is in the books.

As always, thanks for tuning in, but don't worry, it ain't over yet -- join me next time when I put together the Ultimate Short Term Stops team, stocked with the best of the best from each of the 30 rosters I've recapped in this series!
Posted by Nick at 6:34 PM

Even though I despise the Yankees, I am glad to see you included Richie Sexson. He has been a favorite of mine since his days in Cleveland, and he is one of my player collections.

These have been fun to read. If you wanted to spice up the bullpen you could have included Lee Smith and Jeff Reardon. I know that Smith has at least one card as a Yankee out there. Both would have qualified.

Thanks again for a great series of posts... I'm looking forward to the final one!

I have the same thing with my Dad...he loves the Yanks, and I love the Mets. And my brother is a diehard Red Sox fan.

I had no idea Lew Burdette was a Yankee. That's mind blowing. No love for 37 games of José Canseco, though?

I was going to make that same comment about Conseco! Some cool selections though.

Jimmy Wynn hit the first home run in the remodeled Yankee Stadium. Lots more people could be added here as the Yankees seem to always be picking up aged veterans. Canseco is a great example. How about Frank Tanana for the last week of the 1993 season in a last-ditch attempt to overtake Toronto? He got at least one card as a Yankee too.

I enjoyed this series of posts!

Have you done an all zero-year team?

As someone who enjoys making customs, I'd also be interested in notable short-term stops without corresponding cardboard to document them, though I suppose that wouldn't make for a very interesting post for a card blog. But you could try digging up photos of the players, at least.

Just a couple ideas to try extending the series a little! lol

I genuinely have no recollection of Sexson or Pudge playing in the Bronx. I think the Yankees even played the Pirates that year in interleague play. Great (and apparently educational) post!

Sad to see this series of blog posts come to an end. Had no clue most of these guys played on the Yankees, but I have a copy of the 76T Bonds and I vaguely remember the Pudge trade with Detroit.