2018 Topps is here, and so are the pack searchers 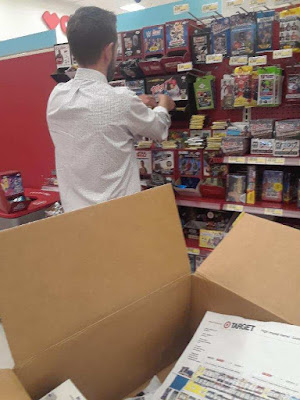 My dad has recently started working as a Target vendor on the side in order to get a few extra bucks, and one of his tasks this afternoon was to bring the new glorious season of cards to us collectors by stocking 2018 Topps.

And in his words, it took no more than 30 seconds for the First Pack Searcher of 2018 to present himself. Button-down shirt guy seen above started feeling at the loose packs almost immediately after my dad put them on the shelves. He even followed my dad upstairs and felt at those packs, too. Thus began the 2018 card season at my dad's Target.

So, congratulations -- the award for World's Fastest Pack Searcher officially goes to This Asshole. 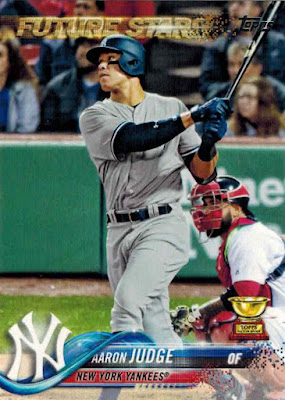 But thankfully my dad set aside some of said 2018 Topps for me before Pack Searcher Neanderthal showed up: I busted a blaster and a handful of loose/fat packs to kick off my season.

And now that I've finally seen the cards in hand, I have to say that while it's probably nothing more than a middling Flagship set in the grand scheme of things, 2018 Topps simply feels a lot fresher after the bland misery that was foisted upon us in both 2016 and '17 Flagship.

This year's design has that odd TV-graphic element to it (which I still don't like), but to me, it seems like the cards themselves are a bit more colorful and vivid than most of what we've seen lately. 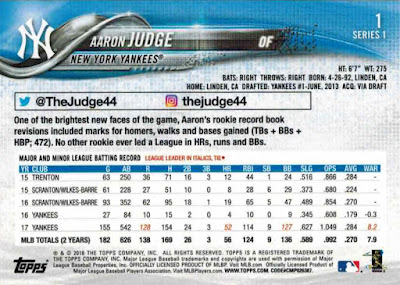 The backs remain superb as well, stocked with color-coordinated headers and the ever-polarizing social media tags, which I've kind of accepted at this point (though I'd still much rather have complete career stats). 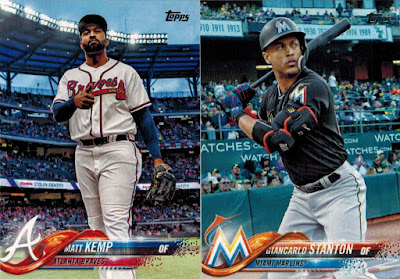 The photography is up a tick in 2018 Topps as well -- there's still an overload of boring action photos, but Topps snuck a few more stop-and-look shots into the set this year. 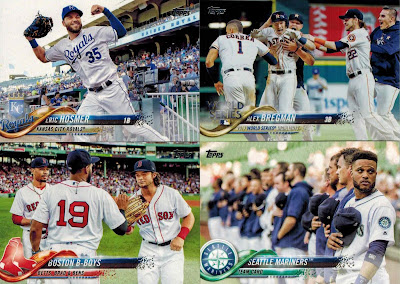 Horizontal greatness, including the team cards which continue to be a pleasure in this year's Topps. 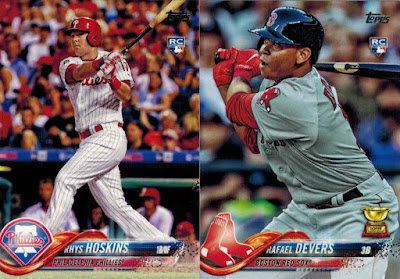 It seems like now, more than ever, I have a tough time keeping up with all the big rookies, but I know these two guys (and into the binders they'll go!). 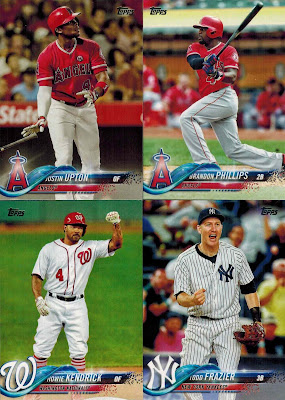 Here's another 2018 Topps joy (though we wouldn't have had to wait this long if 2017 Update didn't suck so badly): guys on new teams!

I can give Topps a pass on late-season waiver trades like Upton and Phillips, but there's really no reason Trade Deadline deals along the lines of Kendrick and Frazier shouldn't already have had cards in their new duds.

But the past is the past: I have them now, and I'm happy for that. 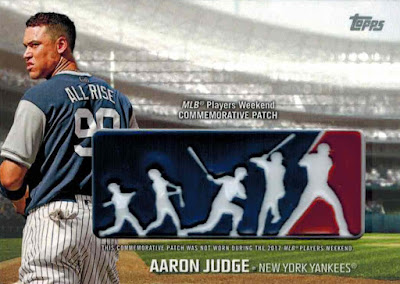 This is the part where I start to laugh in that stupid pack searcher's face.

I don't much care about these blaster-exclusive Players' Weekend manu-relics, but pulling a Judge was a joy, and it'd easily recoup the cost of the blaster alone should I decide to sell it. 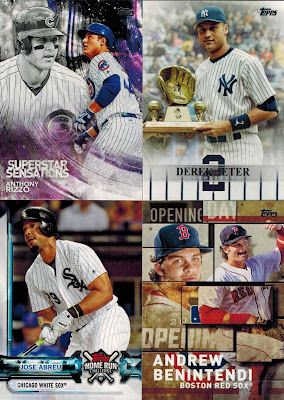 I've started to simply accept the fact that with every year of Topps comes a mind-numbing array of pointless insert sets which serve no real purpose apart from granting (still) more cards to the game's biggest stars.

Sure, it's always fun to pull a new Anthony Rizzo, but one wonders how many better ways that piece of cardboard could've been spent. 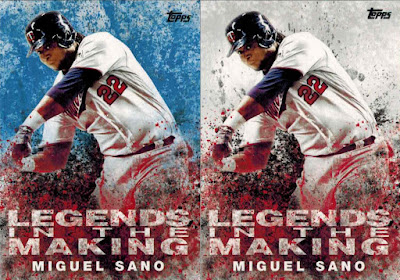 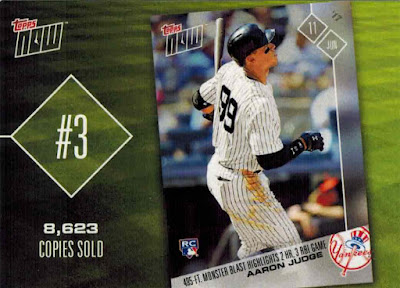 And talk about self-aggrandizing: here's cards that honor the best-selling cards from 2017 Topps Now.

No, you don't get the actual Topps Now Judge pictured, mind you, just a card telling you that this card sold over 8,000 copies last year because Topps is just ever so shrewd and popular. 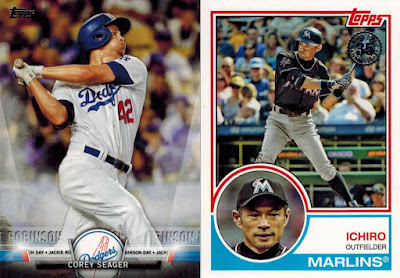 Let's move on to a couple inserts I actually like.

Last year's Salutes make a return in 2018, and I might be the only person who's actually happy about that. They look a bit better than last year's design and continue to feature celebratory days from 2017 (including Jackie Robinson Day, which is a mini-collection of mine).

The '83 inserts don't have the vintage-stock feel of last year's '87s. And while there are a few other '80s designs I'd rather see honored (1981, hello?!) retro-themed sets are still fun to collect. 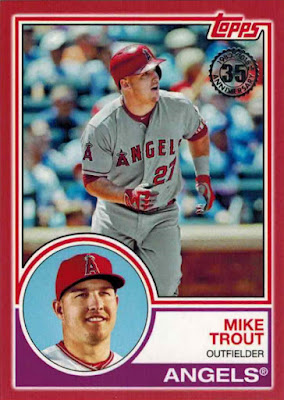 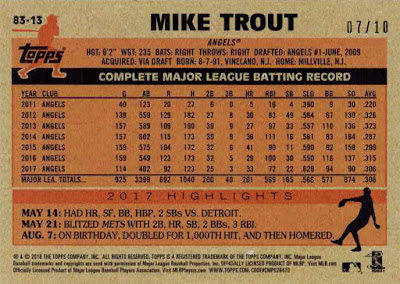 ...here's one of the best damn cards I've ever pulled from a pack of cards.

That, friends, is an '83 Topps red parallel insert, which are limited to just 10 copies and, according to the wrapper, fall at a rate of 1:12,162 packs(!!!). And while I could've pulled one of any Joe Schmo...I got a Mike Trout! A pull for the ages, and proof that Dad's pack-picking talents are back and better than ever this year.

Hope you enjoy your two-dollar jersey cards, Pack Searcher Loser -- I'll just be over here with my shiny new Trout enjoying the rest of the 2018 card season.
Posted by Nick at 6:43 PM

Wow, nice pulls for sure - and thanks for showing off the first signs of 2018 baseball cards! I think the design is a definite upgrade over the past couple of years as well, I'll probably track down a blaster to give it a go before deciding if I want to actually collect the entire base set.

I hope i see that guy again,so i can tell him about thst Trout card!!

And readers..he pulled out EVERY PACK and gave 'em the slight bend touchy feely!

Wow! Looks like you had a good time with the new cards. Some great pulls in there. Congrats on that awesome Trouty!

I'll admit, I was at Target the other day staring at the card section, hoping that 2018 Topps would magically appear but alas, it didn't. Fantastic pulls, though. Those 1983 Inserts are just tremendous. For some reason, I'm more excited for this years Flagship than I have been since I got back into collecting five years ago. I'm definitely going to get some loose packs or a blaster from Target and maybe some loose packs from the card shop here soon.

Way to stick it to that lousy pack searcher!! He probably got a few Henry Owens parallels.

Great pull on the Trout. I can't believe the Topps Now thing, just start a separate division of Topps that just prints Aaron Judge cards and give the rest of us a break.

I have yet to hear one good, solid explanation for pack searching. Can't stand people like that. Happy 2018 Release Day to you; what a haul!

Congrats on have an "inside source"! Many times I've seen the vendor boxes just sitting there in the backroom just waiting for said vendor and I've always beeen tempted to just do it for him/her when a new release is out.

I'd like to give that guy a little touchy feely - and it wouldn't feely to good! Great job by DAD! He is one of the coolest Pops out there!

Great pull with the trout. And I know when I get my blasted my manurelic will not be Judge. It’ll probably be a Devil Ray.

Nice Trout Nick! Looks like you and I were pretty much in line across the board on our thoughts on this release. Great post, Nick 1, Pack Searcher A-hole 0.

Congrats on a great start to the card season!

That Trout card looks excellent in red the way it matches the Angels colors! Congrats on the pull! Your dad must of pack searched for you to get a card like that :P

Very nice! Now you can sell the Judge and Trout and have one hell of card show buying spree.

Good lord Topps. A card just to pat themselves on the back for taking advantage of Judge card flippers?! The Legends in the Making are cool looking but the parallels are unnecessary.

Damn! Nice pull on the Trout!

Saving the best for last! That's a heck of a pull.

Congratulations on pulling that Trout! Epic pull. As for the pack searcher... it's so sad to see a grown man feeling up packs. Seriously sad.

I was able to hit my Target Saturday morning and it seemed all the stock was still there. From what I could tell I plucked the first blaster from the shelves. BUT, all of the loose packs were out of the gravity feed box and littered all over the shelves. I wonder if button down shirt guy made his way down I-55 to P-town.