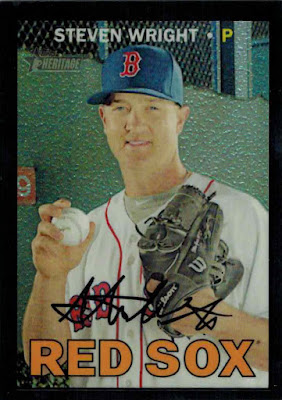 I've stayed at a hotel maybe a half-dozen times in my life.

My family never traveled much when I was growing up, and hotels always made me a bit uncomfortable on the rare occasion we did. Even just last weekend, as I roamed the hallways of a suburban Holiday Inn, I could sense some of that old reluctance creeping through me. I can't put a finger on what exactly it is about hotels that makes me feel the way I do, but it's still there.

Given all that, you ask, what the heck was I doing driving to a Holiday Inn on a cold Sunday morning in the first place? 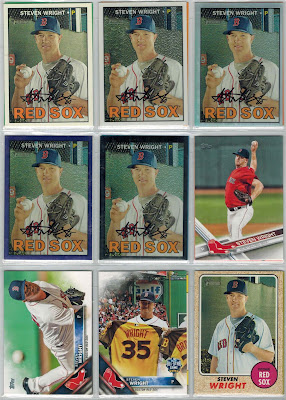 I'm lucky enough to live in an area where hotel card shows are still a thing, and my local monthly one is held at a Holiday Inn about a half-hour from where I live. With a good amount of Christmas cash in my pocket and a Sunday to myself, Dad and I decided to make the journey this past weekend.

It's a smaller show, so you're not likely to secure any gigantic finds. Case in point: until the dying minutes of the day, the whopping $2.50 I paid for the Stephen Wright Heritage black refractor (numbered to a mere 67 copies) at the top of this post was the most I spent on a single card all afternoon.

And the only reason I pulled the trigger was because, as you see above, I've sort of stumbled into building a Wright rainbow -- I now own the base, chrome, chrome refractor, purple refractor, and (now) black refractor versions of it. 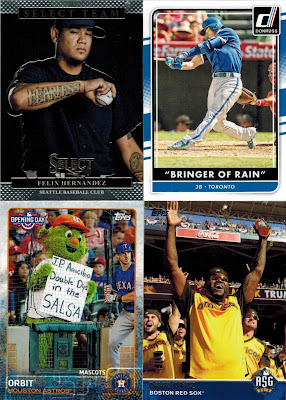 For reasons I've detailed in the past, these smaller hotel card shows are easily the best fit for my quiet, introverted collecting personality.

It's well-attended but not too well-attended to the point where people start throwing elbows at you. Most of the cards are affordable. The vast majority of the dozen-ish vendors are regulars, and I've been going to this show long enough to recognize most of them by now (a couple even wished Dad and I a Happy New Year).

And here's the biggest draw of the Holiday Inn show: almost every table has a dime box (and even a couple nickel boxes), and with a little digging, it's easy to find stacks and stacks of great cards like these. 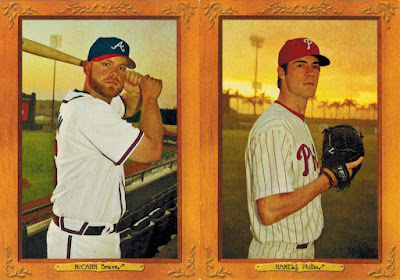 To put it in perspective, I came home with about 700 cards over a good three hours at the show -- and remember, this is just one small hotel banquet room we're talking about here.

While the finds largely skew towards newer stuff, that doesn't eliminate the possibility of a Card Show First: somehow, these are the first singles I've found from the online-only years of the Turkey Red brand (which was always a favorite of mine). 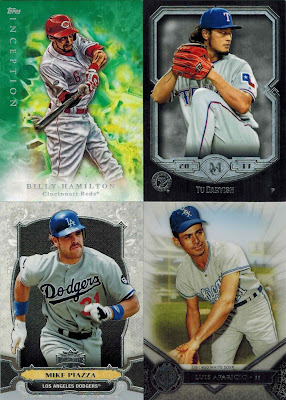 And like I said earlier, not one cent I spent came from my own pocket: the whole thing was funded by holiday cash I received from relatives.

There's no greater feeling than coming home from a card show that didn't put a single dent in my bank account -- not even these high-end goodies, which, aside from the Aparicio (a dollar), were all dime box finds. 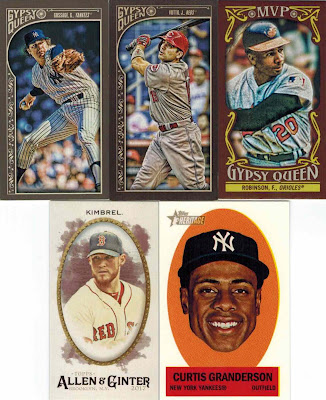 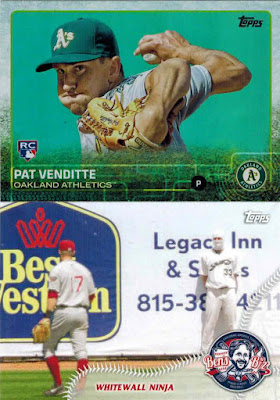 A couple fun dime box randoms: despite what my scanner is trying to tell you, that rookie card of switch-pitcher Pat Venditte is actually a foil parallel, and no, I have no idea what's going on with that bottom card, either. 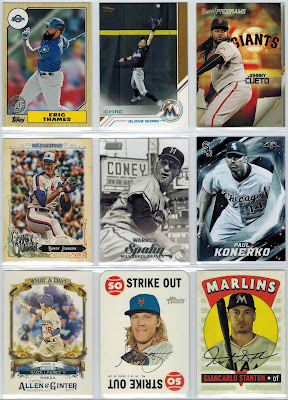 I know going into this show that vintage isn't much of a possibility, so I'm not disappointed that the vast majority of what I took home on Sunday was comprised of cards issued within the last few years.

It's always fun knocking out needs from recent sets, and that goes doubly so for (now-former) Dime Box Dozen needs like that Stadium Club Spahn (dig the vintage billboards!). 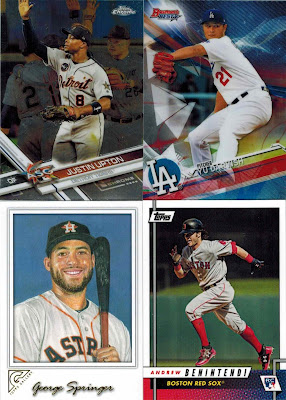 Better yet, Sunday proved to be an introduction to a few current brands I'd probably never see without box-busting vendors like the ones I've gotten to know at this show.

The Upton comes from this year's Chrome Updates which either my Target never stocked in the first place or sold out of within days of its release, because I checked multiple times and found exactly none on the shelves. I like the colorful Bowman's Best design a whole lot more than Topps Gallery, but both the Darvish and Springer were easy buys at a dime.

The Benintendi is from something called Topps On Demand(?), and while it seems to be a blatant Topps Now ripoff, I couldn't resist adding one to my binders for a mere two bucks. 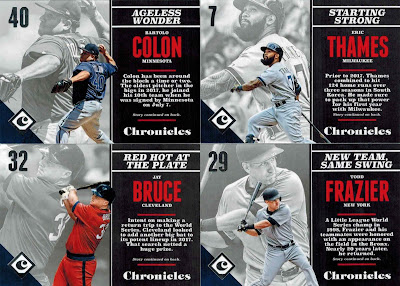 Also present was my first look at the new Panini Chronicles, which are butt-ugly but have one major plus going for them: they actually show trade-deadline guys on their new teams.

The train-wreck that was 2017 Topps Update meant that guys like Bruce and Frazier never got cards in their new duds, but at least Panini kinda managed to pick up the slack there (also, bonus points for the Bloody Mary Indians throwback). 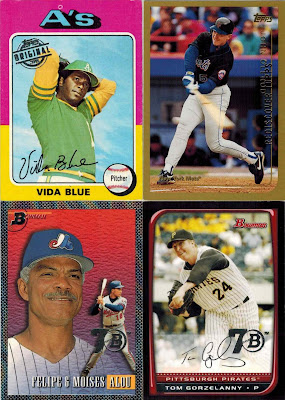 I know a few fellow bloggers who would've been in heaven at this show, because at least half the tables there had a considerable amount of cheap buybacks for sale.

I did pick up a nice stack of 'em to distribute among my fellow blogging buddies, but these top-tier player collection hits are staying with me -- including local hero Tom Gorzelanny and a beautiful '75 Vida Blue (sorry, Greg). 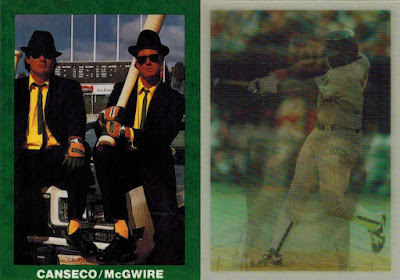 This show may lean heavily on the latest-and-greatest stuff, but that doesn't mean there aren't goodies from years past to enjoy. 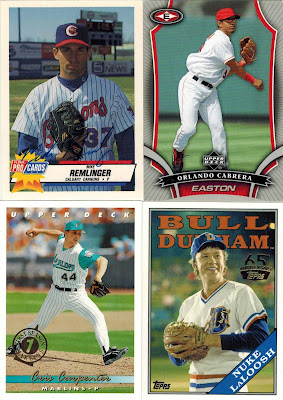 A quartet of pure dime box fun here: the Nuke LaLoosh is really the only card I wanted from last year's Bull Durham inserts, and if you look closely, that Remlinger is autographed (and I actually collect him!).

Also, in this edition of Card Show Education, I never knew Easton issued baseball cards, and apparently Upper Deck distributed stamped team sets for the expansion Rockies and Marlins in '93.

The more you know. 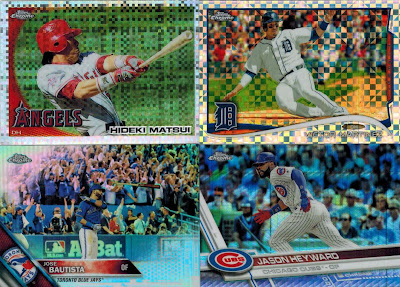 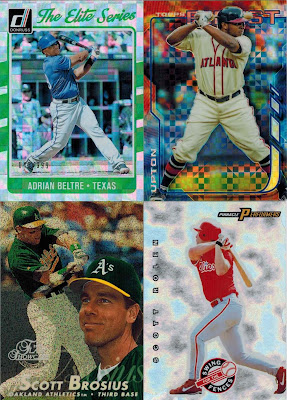 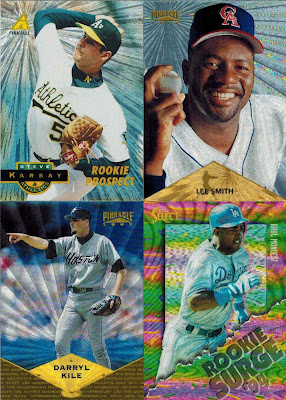 (That Mondesi may be one of the greatest cards I've ever scanned in the history of this blog.) 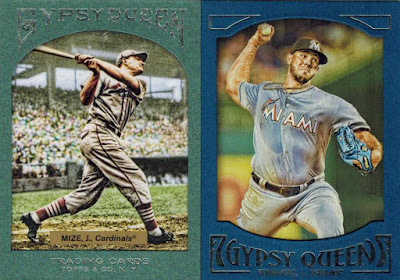 Come on, guys, were you really expecting to slip framed GQ parallels past me at a dime a piece? 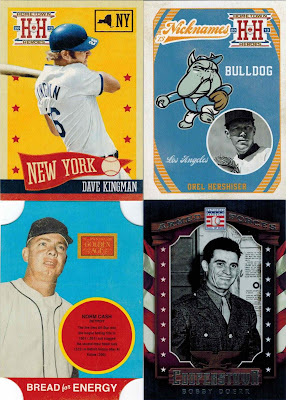 Examples of the great cards Panini can produce when they put their mind to it. 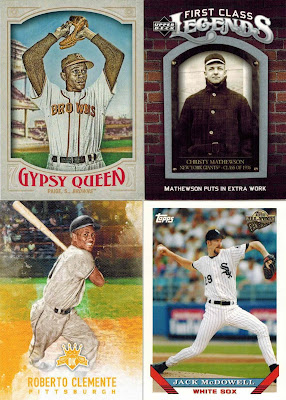 One of the regular vendors always has a large all-retired dime box, and it remains among my most enjoyable card show experiences.

These are just four of the hundred-plus cards I plucked from the guy's inventory (with the Satchel Paige probably being my personal favorite). 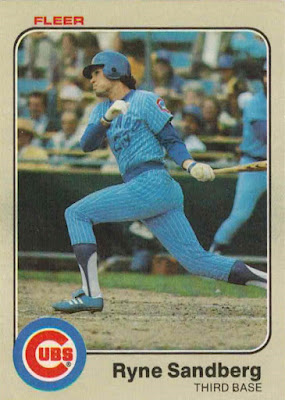 In taking a page from a couple other bloggers, you may have noticed I've added a second want list to the sidebar of this blog with "Keep Dreaming" cards that are most assuredly not Dime Box Dozen commons.

It's more for my own reference than anything (though if you have a spare '58 Maris or '63 Musial, by all means...), and I sure as heck wasn't expecting to hit anything from it at the Holiday Inn this past Sunday. But then, just as things were wrapping up, there it was: an '83 Fleer Ryno, the very same card I'd just added to my inaugural "Keep Dreaming" want list!

The vendor had it priced at $10, but I managed to talk him down to $7 -- not the Steal of the Century or anything, but a small price to pay for a card that completes my Ryno Rookie Card Triad (Topps, Donruss, and Fleer). 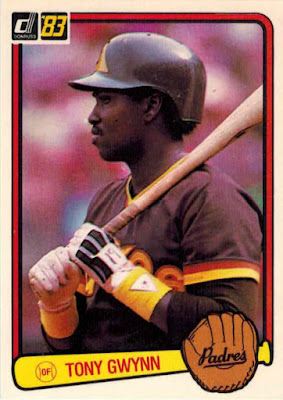 And somehow I initially missed the card sitting right next to Ryno the whole time: an '83 Donruss Tony Gwynn rookie...also from my "Keep Dreaming" wants!

Like the Sandberg, this Mr. Padre was priced at $10, and again, the vendor took $7 for it. And like the Fleer Ryno, this was the card standing in the way of completing Gwynn's Rookie Card Triad.

And so with a bag of over 700 baseball cards in my hand -- including a pair of "Keep Dreaming" cards I no longer had to dream about -- I bade adieu to the suburban Holiday Inn and walked out into the winter afternoon, feeling somehow warmer than I did when I'd entered the automatic doors just hours before.

Maybe hotels aren't so bad after all.
Posted by Nick at 6:21 PM

I love those types of shows where I can spend lots of time browsing the dime boxes and you don't feel overly rushed. Really liked the Ortiz card but you really got some nice cards. Really fun post. Thanks.

I love hotels, which is why you should send that Vida Blue buyback to me.

Great haul! I actually picked up that "Rookie Class" Topps On-Demand set when it was available and have been meaning to blog about it one of these days.

Nice pickups! I will be going to my first ever card show on Sunday (although it is technically a comic book show), and plan on going to a real baseball card show in Orlando in March.

Had a great time with you at the show,Nick!

I'm glad you explained where that Benintendi because came from because I've neither heard of nor seen that set. It looks pretty good,though.

Awesome. It is funny how that Whitewall Ninja card has a Best Western sign on it.

And obviously I'm a big fan of the Vida Blue buyback, but that Mize GQ parallel is something else, such a great photo!

Is that a Bash Brothers Broder? If so... that's awesome. But not quite as awesome as the 75T Vida buyback or the 83D Gwynn rookie.

P.S. I miss the days when there were card shows at hotels in my area. Last one I attended was close to a decade ago.

I wish the lone hotel card show in my area was awesome like that! Nice finds on everything, including the Ryno and Gwynn cards.

I think Air B&B's make me even more uncomfortable than hotels. Something weird about staying in some random strangers house. I've had to stay in enough hotels over the years now that it really doesn't bother me as much as it did when I was a kid.

Hotel shows pretty much died in my area the same time as mall shows. Flea markets are pretty much it minus a few big Pittsburgh shows a year. Looks like you had a nice haul.

We used to have hotel shows once or twice a month back in the early 90s. Man, I miss those days! Dime boxes or nickel boxes at every table? Man, you're living the dream for sure.
The Nick LaLoosh card is one I'm still trying to track down. Love that movie! I also had never seen the Orbit card. He's the best!

I miss living somewhere where card shows are a thing, period. Probably the only thing I miss about Ohio, actually.

Man I’m officially jealous hearing about all those stacks of cheap buybacks! Looks like that Bull Durham insert is also a buyback? Odd to say the least...