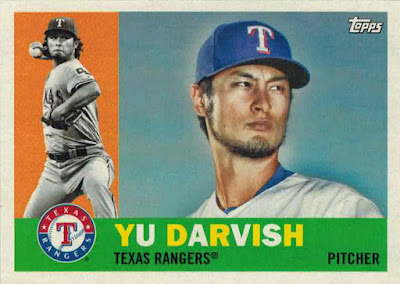 For many reasons, working at one of the country's busiest airports is often surreal, not the least of which is because I sometimes bump into celebrities.

As was the case last week, when I looked at a customer who'd just handed me a Richard Scarry children's book and thought: Wow, that guy looks a lot like Theo Epstein. That's because it was Theo Epstein, as confirmed by the name on his credit card.

Awestruck and generally speechless as I was in that moment, I first could only spit out the words No, thank you! to Theo after he thanked me for the transaction. I managed to compose myself enough to tell him I was a big fan of his and that I'd be watching in 2018 as he was walking away, to which he then responded: It's gonna be a fun year.

I'm starting to think there was a coded message in this sentence, perhaps something along the lines of We're signing Yu Darvish, which the Cubs did today -- a move which, in turn, inspired me to compose a Top Five list of the newest Chicago Cub. 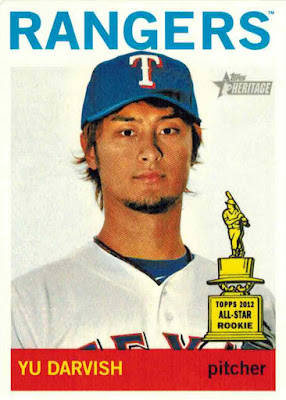 2013 Heritage was kind of a mess, but wow are those vintage Rookie Cups fantastic. 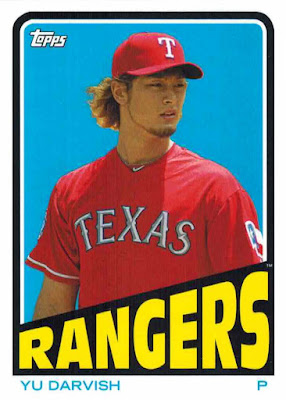 You wouldn't think inter-sport design crossovers would work all that well, but I sure think they do. 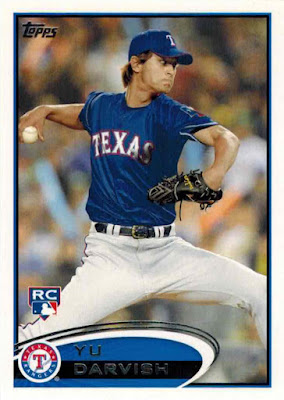 My memory's a bit hazy on the matter, but I'm pretty sure this was my first Yu Darvish card.

I remember it being a big deal at the time, and also being quite satisfied that I managed to pull it from a pack and thus wasn't forced to have to chase it on the secondary market since Yu-mania was going strong. 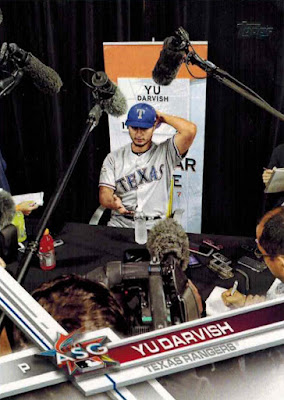 Press conference shots are terrific and rarely utilized in the hobby, which made me glad Topps snuck this one into their SP checklist in 2017 Update (look at all the boom mikes!). 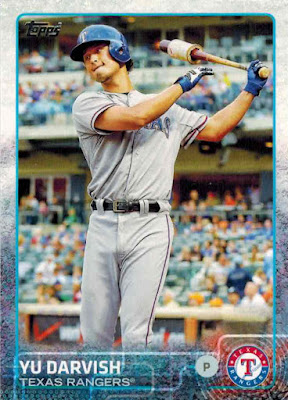 I don't know how I feel about the fact that my two favorite Darvish cards are both photo-variation SPs, but it's true.

I paid $8 for this at a card show a few years ago, which is a nearly unheard-of sum for a non-vintage item for me. But I felt it was a fair price to pay since you don't often see pitcher-at-the-plate shots these days, much less ones featuring American League pitchers.

Darvish saw his first regular at bats during his late-season trade to the Dodgers last year, and I look forward to watching many more with the Cubs in the considerable future.

That's gotta be a nice side benefit to working at one of the nation's busiest airports. Everyone's treated the same at an airport.

Also thank god that they signed Darvish - I don't think I could take this saga dragging into March!

I'm glad they signed Darvish, although I'm not a fan of the length of the deal.
Curious to see where Arrieta lands now.

You've got quite an interesting workplace. Theo Epstein is one of my heroes; I'd be starstruck and tongue-tied, too. And I'm not surprised he'd be the one to thaw this frozen "hot" stove season. That 2015 Topps SP is really cool, I haven't seen that one before.

Those were my exact thoughts, in that order.

Glad to see him land with the Cubs. Even more excited that he didn't sign with the Yankees. That 2015 Topps card is really cool. I can't really picture any of my Darvish cards, but I'm sure one of his Topps/Bowman WBC cards would make my Top 5.