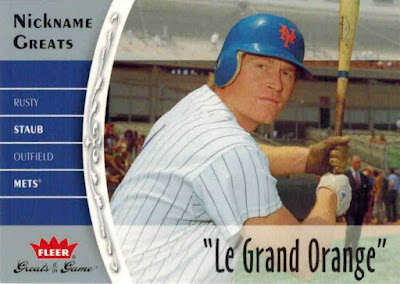 Daniel Joseph "Rusty" Staub passed away earlier this week at the age of 73.

It's always sad when a member of the baseball brethren leaves us, but it hits me especially hard when it's a guy I've followed for much of my life as a baseball fan. Like a lot of other fan favorites of the '70s, Rusty has been near the top of my collecting hierarchy for as long as I can remember, and sadly, he joins a growing list of players from that era who have since left us.

It's in tribute to the late Rusty Staub that I've decided to focus on him in this week's Top Five. 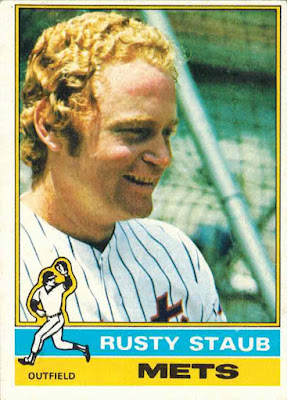 Staub was a man of nicknames -- in addition to "Rusty," he was widely known as "Le Grand Orange" during his days in French-speaking Montreal for his dirty-blonde hair, which is shown better here than on any other card I own of his.

Staub has so many nicknames, in fact, that despite my longtime fandom of his, I actually had to look up what his real name was before I started this post (Daniel Staub doesn't have the same ring to it). 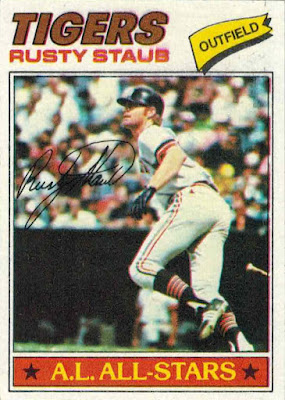 Few All-Star players have looked more like All-Stars than Rusty Staub does on his 1977 Topps card. 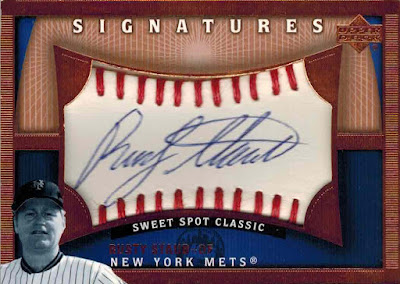 I don't talk a lot about my game-used/autograph collecting days now -- it's somewhat of a skeleton in the closet of my collecting history.

But fact is I still have a lot of the cards I acquired from those years, and I'd be lying if I said I didn't have a small amount of remaining affection for a handful of them. Rusty here is one of the kings of my meager autograph collection, and from what I can remember, I got it on the cheap during my forum days.

I'm not much in favor of slicing up baseballs and inserting them between pieces of cardboard, but they do make for impressive cards (and unlike a lot of other Sweet Spot horror stories, the autograph hasn't faded...yet). 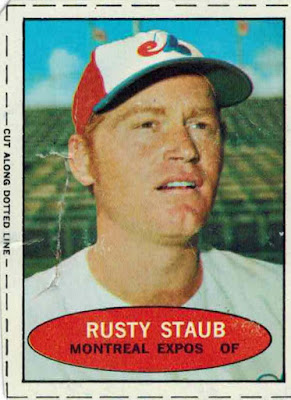 This is the one and only vintage Bazooka card in my collection, and it will always stand as one of the greatest items I've ever found at my local flea market (and for only a dollar!). 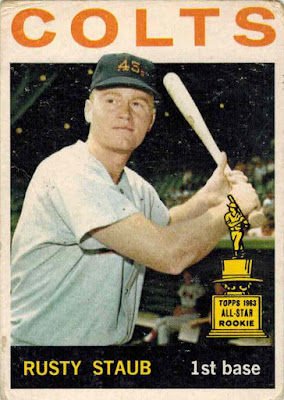 But my favorite Rusty Staub card is the first one I ever owned.

Not long after I returned to the baseball side of the hobby, I set out to acquire a few "big" pieces for my collection. I immediately fell in love with this '64 Rusty and, within minutes, went out and bought a well-loved copy for my archives. That was over a decade ago now, but my affection for this card hasn't waned since.

First off, it's one of the extreme few Colt .45s cards I own, and it's Rusty's first solo Topps issue (after his multi-player high-number rookie in '63 Topps which, if that description doesn't give it away, goes for infinities out of my price range). It's also a terrific rare look at a young Rusty, and OH MY GOD THOSE VINTAGE ROOKIE CUPS. Add that all up and you have what is -- and will always be -- one of the kings of my collection.

A boyhood fave....he was the one who told Mark Fidrych to stop screwing around shagging batting practice flyballs...which Mark ignored and messed up his kne...

That GOTG Nickname Greats would be a fun set to build. Great group of Le Grand Orange cards. My favorites would be the Bazooka and that Sweet Spot Signatures.

I am too sad to say anything else but RIP