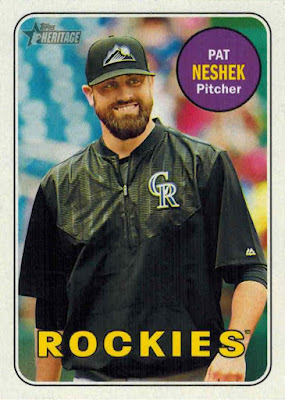 I worked overtime at my job last week, which means lately I've been stressed, frustrated, exhausted, and virtually every other work-related adjective out there.

But I did my best to take it all in stride, because there was one major factor getting me through all the minor annoyances: my extra pay would basically fund the big tri-annual card show waiting for me at the end of the overtime week. My customer-service mantra through it all was basically Card show, card show, card show...until finally, last Saturday, that glorious Card Show Day finally arrived after what sure seemed like a couple lifetimes.

At the very least, the extra money covered my dime box digging -- and while there's always a ton of dime gems to be had at this show, my main goal was to get my hands on some cheap 2018 Heritage because I'm damn sick of buying horridly-collated packs of the stuff.

Initially, however, it looked like the card show might lead to even more unwanted stress: one walk around the giant convention hall resulted in absolutely no Heritage commons for sale. 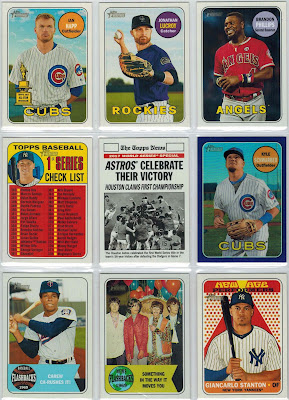 My first reaction was one of rage: you're telling me NOBODY here has ANY Heritage?!

This thought remained until I stumbled across a vendor I recognized from some of the local shows who had some higher-priced Heritage inserts/parallels for sale. When I asked him if he had any commons, he nodded, pointed to a box stashed under his table, and told me everything in there was ten cents. With a few other Heritage inserts/parallels/SPs I found, my Heritage spree set me back a little less than the cost of a blaster.

And thus the card show was saved! 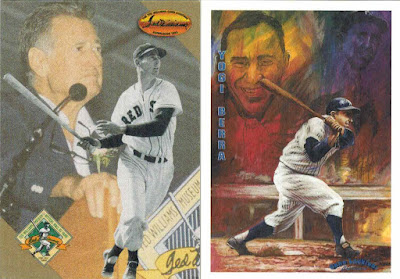 With Heritage taken care of, I was able to resume my regularly scheduled programming and let the dime boxes work their usual magic.

We might as well start with these beauties from the Ted Williams brand (including a Ted Williams Ted Williams!), which were staggering dime box finds since I have a tough time digging up inserts from this set. 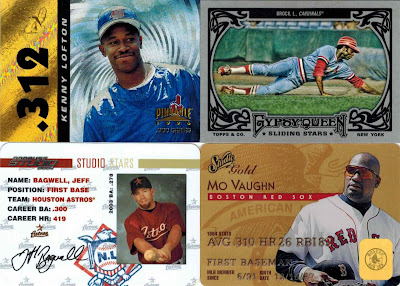 Horizontal greatness comes in many forms. 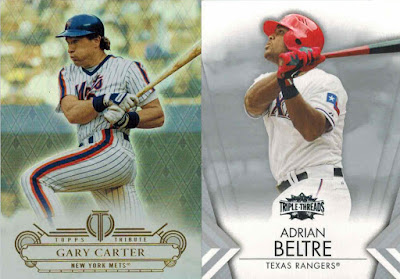 I've said it before, and I'll say it again: I'll never tire of finding high-end brands in dime boxes. 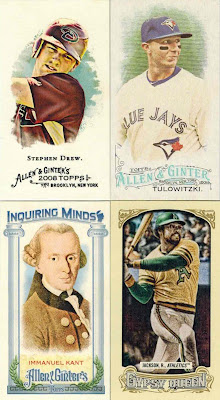 Dime box minis, including Tulo, Reggie, and Immanuel Kant(!) for all you philosophers out there. 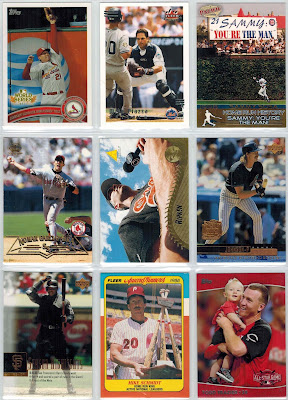 There's been a Blog Bat Around topic making the rounds lately regarding the in-progress projects of those around the blogosphere.

I don't know that I could ever write a post like that because a) it'd turn into a novel with all the different things I collect, and b) I don't really think of my collection in terms of specific projects -- it's more of a Let's see how many of these I can accumulate kind of situation.

My mini-collections would probably be the closest I can come to anything resembling a sane project, and all of these were treasured adds to the various archives (including the interview Ripken, a now-former Dime Box Dozen need). 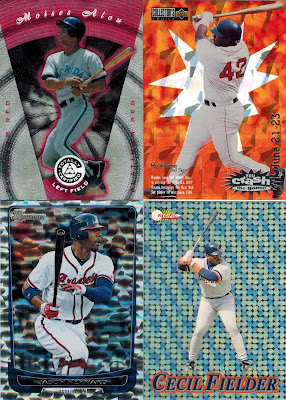 I don't specifically hunt for shiny cards during my dime box digs, but they sure are fun to find (and scan!). 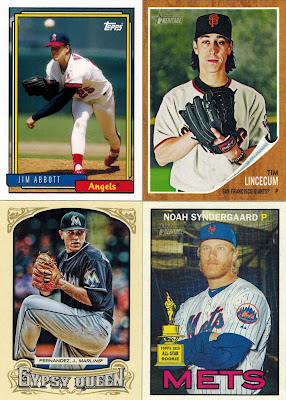 Same goes for dime box short-prints: not really a conscious quest on my part, but an unexpected treat when they show up (especially ones of Jim Abbott and The Freak). 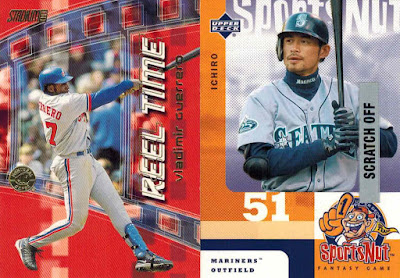 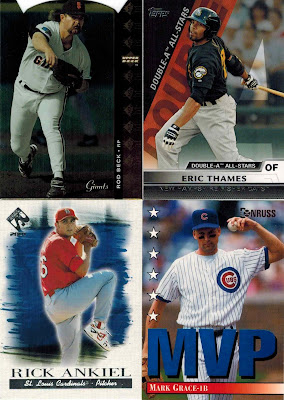 I suppose I'm mostly a player collector at heart, and dime boxes have contributed to the vast majority of those over the many years I've been in this hobby.

Last Saturday was no exception: my player collections -- both new and old -- grew by leaps and bounds thanks to the loaded dime boxes vendors had on display. 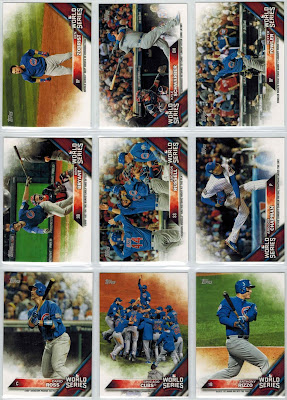 I also found a complete 15-card Cubs World Series hanger pack set in a 3/$5 box near the end of the show, which, unbeknownst to me, is actually different than the Cubs box set I purchased around this time last year.

I think these retailed for $9.99 at the time, which makes the $1.66 I paid for it on Saturday look pretty good right about now. 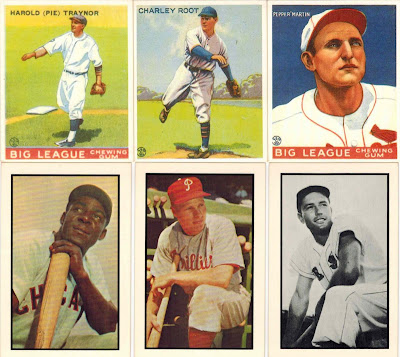 It didn't take long for the day's vendors to pull out the big guns, one of which included a run of old Goudey/Bowman reprints that occupied an entire row of one guy's dime box.

I have a handful of these in my collection, but they've mostly been added one here and one there -- needless to say, I'd never seen anything like the 75-ish Goudeys/Bowmans I'd added to my collection in one fell swoop after the dust had settled at that guy's table. 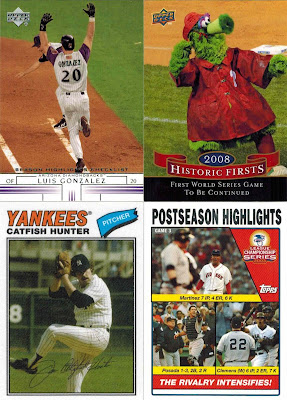 More random dime box fun, including the Phillie Phanatic in a poncho and the closest thing I've ever seen to a Brawl Card from Topps. 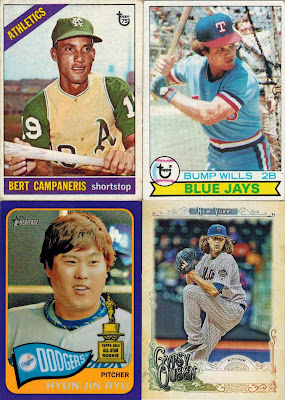 In continuing with the trend from the last time I attended this show, here's some cards I really shouldn't be finding in dime boxes.

Any Campy buyback is a bargain for a dime, much less one from 1966(!). The Bump Wills error is one of those classic cards I'd somehow never added to my collection, though I'd be lying if I said I thought I'd ever find one for anything near ten cents.

And people wonder why I keep going back to the dime boxes. 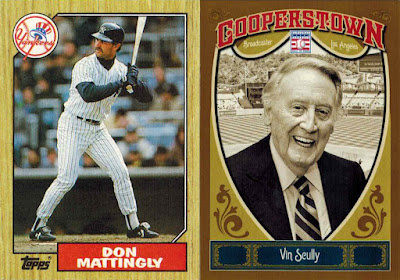 I found exactly one nickel box on Saturday, and let me tell you I could've spent a lot more time at that Nickel Box Table than I actually did.

I'm not exaggerating when I tell you the guy had at least a dozen huge nickel boxes at his table, and that I could've spent virtually the entire show ransacking those alone. I decided to go through only one of them, since my time and energy were waning at that point.

But even that lone box resulted in 100 new cards for the binders (five dollars!), the stars of which included Vin and another former Dime Box Dozen need with the Mattingly. 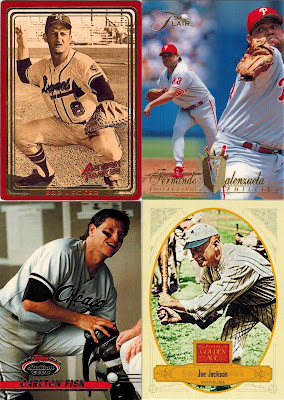 While I sometimes do end up finding longtime needs in dime boxes, they're much better at showing me cards I didn't even know I needed in the first place. 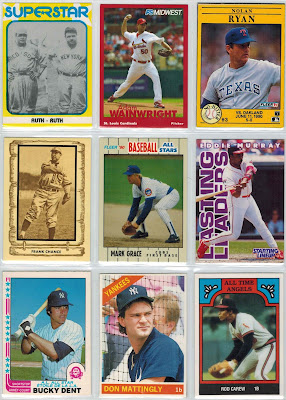 But in the end, I think I have to give the Dime Box MVP Award to all the magnificent oddballs I discovered on Saturday.

Seriously, this show alone is basically responsible for creating my current fascination with oddballs and, as this page might indicate, still packs quite a wallop with its selection of oddities. 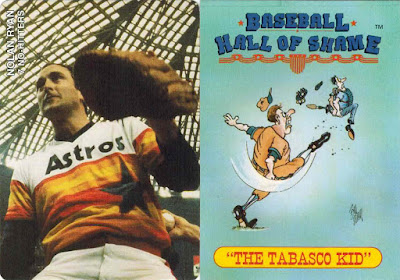 A couple more brilliant oddities, including a major HOW DID I NOT KNOW THIS EXISTED?! moment with that Hall of Shame card.

I read the Baseball Hall of Shame books over and over again as a kid (they're still on my bookshelf to this day), and I had absolutely no idea they printed a cardboard complement to the series. 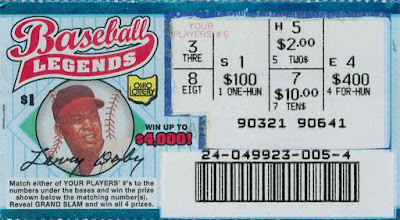 Here's a new one: a lottery ticket!

(And you better believe I'm counting it as a baseball card.) 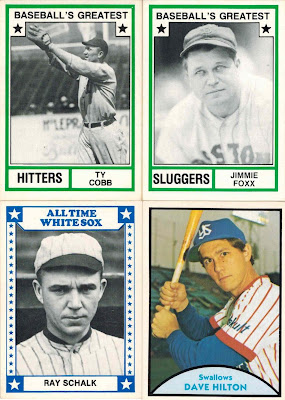 The same guy with all the aforementioned Goudey/Bowman reprints also had a whole run of TCMA oddballs in his dime boxes.

I repeat: a whole run of TCMA oddballs! Do I even need to explain how great that is? Ty Cobb and Ray Schalk and even my very first card from the 1979 TCMA Japanese Pro Baseball set (featuring gaijin Dave Hilton of the Yakult Swallows)?!?!?!?!

All for a dime! 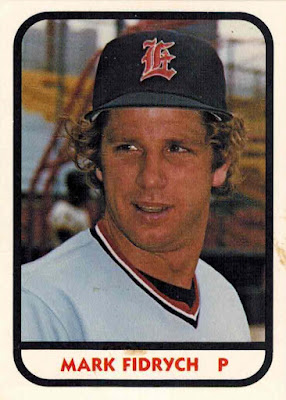 But even with all that, I have to say this was the best TCMA find of the show, and perhaps my greatest discount bin score overall.

I forked over $3 for this Mark Fidrych minor league oddball at the very first table of the day, but that's a small price to pay for a card I knew I'd probably never see again considering how annoyingly rare '80s minor league cards can be. I don't often get to add new Birds to my collection these days, much less ones anything near as cool as this.

So, yeah: in the future, if I ever get to thinking about how frustrating working on an off day was, I'll just go back, reread this post, and remind myself that, holy cow, it was totally worth it.
Posted by Nick at 6:42 PM

Amazing haul as usual! The Campaneris buyback and the TCMA Dave Hilton are my faves. That Larry Doby lottery ticket is pretty interesting too.

Looks like a killer show. I second Jon, that Campaneris buyback is just awesome!

Yeah, it's probably a good idea to sit out this blog bat-around. I still have no idea how you define your collection or know when you've completed something.

Kant's last words were "it is good"...holds for the card show,too!

Fantastic haul, as usual. Hard to pick a favorite, but I'll go with Dave Hilton... Love that Japanese set!

I don't know if this would work any better for you, but when I did the Bat Around I didn't discuss EVERYTHING I collect, just the immediate priorities I planned on looking for at my next card show.

One new goal might be that Immanuel Kant card as an addition to my Monty Python-themed collection...

"I-I-I-I-I-I-Immanuel Kant
was a real pissant
Who was very rarely stable..."

Dangit - I forgot what weekend that show was. Well, here's looking at June.

After seeing that '66 Campy buyback for a dime, I couldn't focus on anything else. Great pickup.

Certain random TCMAs, including the Hilton, were extensively reprinted a few years after their issue as samples of older TCMA sets. Still a great card but be aware it's probably not what you think it is. I believe the color of the text on the back is the telltale of whether it is reprint or original. Haven't seen the Fidrych before so hopefully that's legit.

Soooo many cards! I hate that most of the shows dried up in my area. Now they are combined w/ toy and comic shows (which I don't mind), but they are always held the one weekend I'm not able to go or I'm broke!