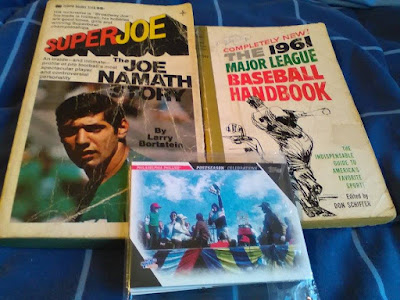 I admit, I'm one of those weirdos who smells their books.

It's what I do every time I come home from my (many) trips to the bookstore: open to a random page, stick my nose inside the fold, and inhale the words. My room has slowly picked up that heavenly oxidized-paper smell as I've added to my book collection over the past couple years.

It's fitting, then, that I won a pair of paperbacks in Matt's excellent Big Fun Game a few months ago on the "Summer of '74" blog -- and yes, the first thing I did when I received those books was, of course, smell them. 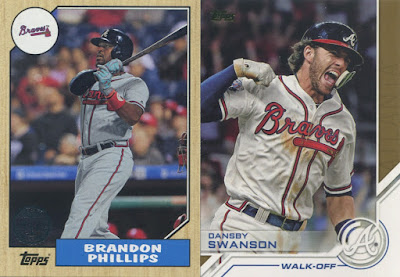 I'm also one of those weirdos who smells their baseball cards, and Matt added a few of those to his Big Fun Game package as well.

Much has been made (for better or worse) about the change in the looks of cards in the wake of the technological era. But what doesn't often get talked about is the fact that they smell different, too.

Last year's 1987 inserts may have done a good job of sticking to the design of the original, but no way do they smell anything close to the actual '87s. 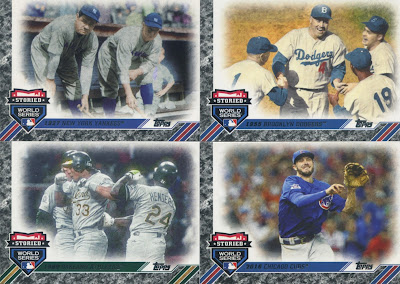 Present cards can document anything from any year they want -- 1927 or 2016 alike -- but nothing changes the fact that they just smell like the present day: that odd, glossy, nothing scent. 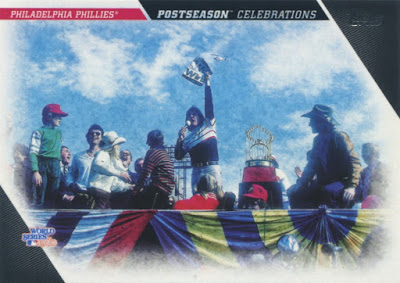 I worry that all this makes me sound deranged or something -- why's this guy writing a whole post about how the way things SMELL?

So let's just get on with the cards for now: as the previous scans show, Matt hit quite a few of my 2017 Update insert needs, including this terrific image from the Phillies' World Series parade in 1980. 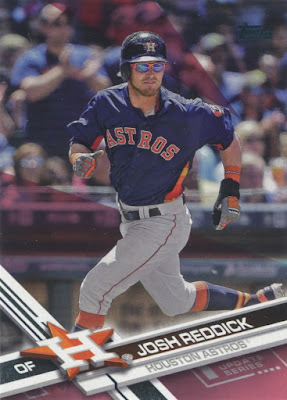 I also recently received a couple PWEs from a new trading partner of mine: Greg of "The Collective Mind."

Greg helped me add a rare item to my growing Josh Reddick collection with this pink parallel (limited to just 50 copies) from last year's Update. 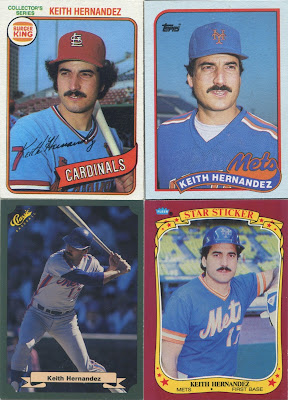 He also made a generous donation to my long-overdue Keith Hernandez collection (I'm not driving him to the airport!) with this quartet of excellent oddballs.

And let me just say that all of these cards smell a bit like how I imagine the entire 1980s smelled like: something resembling the inside of a wet cabin. 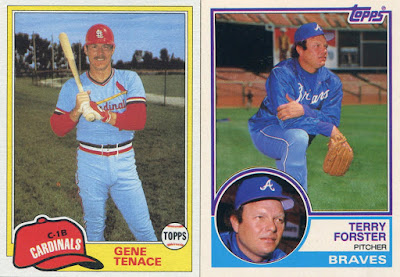 And then came an ambitious assault on my Dime Box Dozen list with these two Topps Traded DBD needs, which had somehow managed to bypass me all these years ('83 Traded seems especially elusive to me). 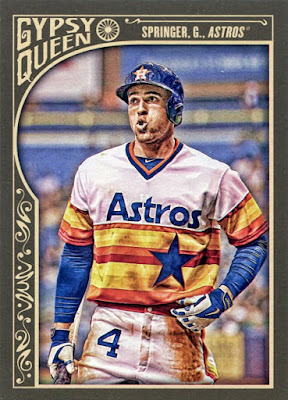 This is a) a card of George Springer, who I collect, b) a card I needed for my throwbacks mini-collection, and c) a card I already had a mini version of without ever tracking down the standard base version.

Add that all up and you have a Dime Box Dozen need that, thanks to Greg, I was especially happy to harpoon. 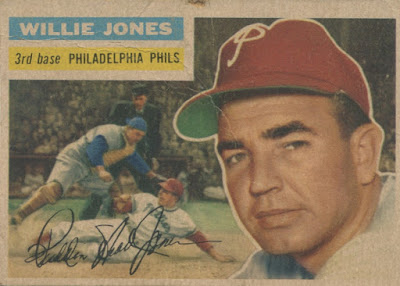 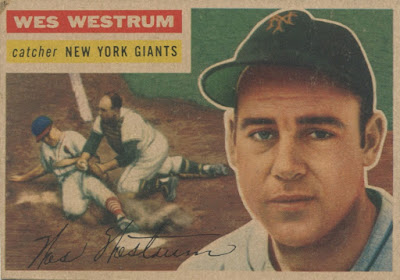 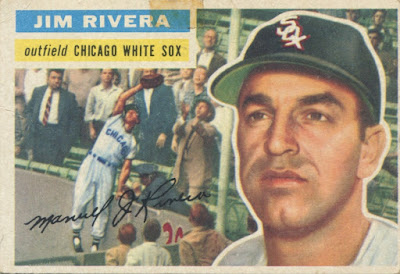 These three masterful '56s came courtesy of reader Mike W. -- all of them take their place among the older mini-collection hits in my collection.

And while I can't tell you much about Willie Jones, Wes Westrum, or Jim Rivera (other than the fact that Jones's nickname was "Puddin' Head"), I can tell you that each of these have that feel and smell that make '50s cards so special. 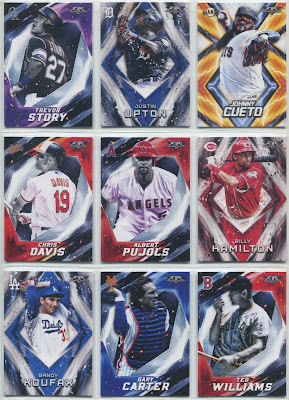 And finally we have some Topps Fire from P-Town Tom of "Waiting 'Til Next Year" "Eamus Catuli!" "Waiting Til' Next Year" fame.

Tom, like me, was pleasantly surprised by last year's Fire brand (though they don't smell like an actual fire, thank god). Unlike me, however, Tom was so enthralled that he decided to build the entire set.

Thankfully, he decided to toss a few of his extras my way -- each of these nine fall nicely into various player collections of mine. 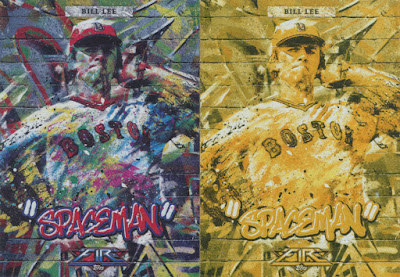 Oddly enough, I was a bit disappointed when I originally pulled a "Spaceman" insert from a pack of Fire not long after the set's release.

That's because I'd just claimed the very same card from Tom on his blog...or so I thought. Tom's package turned up not long after, and I was delighted to find that he'd actually pulled a different version of the "Spaceman," one with a strange turquoise(ish?) hue that differed greatly from the golden one I'd gotten days before.

Chalk that up as the only time I was ever thankful for the advent of insert parallels. 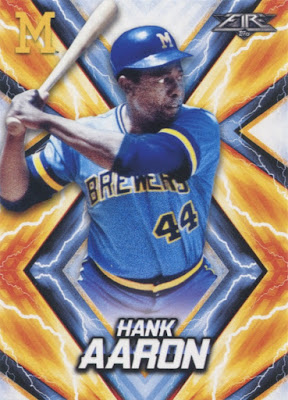 But here was the crown jewel of Tom's Fire Extravaganza: Hank Aaron as a Brewer!

Each pack of Fire I opened came with the faint hope that I'd pull this very card. No luck there. Thankfully, however, Tom swooped in and put that despair to rest, and thus I was granted the rare joy of adding a new card of Hammerin' Hank to my Brewers binder.

Some collectors might think it strange to get so excited over a card of Hank Aaron as a Brewer. Or one of a guy in a throwback jersey. Or one that came off the bottom of a box. I'd bet even more find it strange that someone would actually take the time to smell their baseball cards, and articulate those smells.

But if smelling my baseball cards (and books) makes me a weirdo, then I guess I'm a weirdo.
Posted by Nick at 6:28 PM

I love the feel AND smell of vintage cardboard. You can't beat it!

I love that you mention the smells too. I especially love that fresh-from-the-pack smell.

That Aaron is great!...and the 80s smelled like hairspray and weed,haha!

I hear you on the card smell. Back in my youth it had something to do with the gum. As for books, I'm not a fan of that musty smell old books get. My Maine Coon cat loved it. I do like the sound of the flipping pages and the feel of them as they flip. We're all weird in our own ways.

Ummm, no enjoying the smell of your cards doesn't make you strange...or maybe I'm especially strange too. Either way, great post!

Since I keep a lot of my paper collectibles (books, cards, postcards, etc.) in my bedroom, I am constantly being bathed in that old paper smell... and I wouldn't have it any other way!

And smelling cards can be a good thing as well, especially cards of the vintage variety, as it can be one of the many ways to tell if something is real or not.

Nothing beats that vintagey smell. A little musty dusty, and a little bubble gum sugar. Can't be reproduced artificially.

Love the vintage smells of cardboard and books. That reminds me of the blog "I Love the Smell of Cardboard in the Morning" http://lovecardboard.blogspot.com/ yes those fire spacemen cards look a bit disappointing. Design too busy with too many colors popping. The Hank Aaron as a Brewer is kind of cool, but like his final career cards (1975 and 1976) seeing The Hammer in a Non-Braves uniform is extremely odd. OK so it is a Milwaukee uni, but not a Brave.

I can't deny it. I smell my cards and books too.

I commented via Twitter but found myself on this post again. I am a proud nerd who loves the texture and smell of books and baseball cards. Paper and ink vary greatly, and with the addition of years - well the scent can be intoxicating. Why there hasn't been a cologne "Paper for Men", I do not know but it's a goldmine waiting to happen. Smoke and mildew are the two smells that have caused me to pass on a much wanted paper friend. I hope that doesn't make me an uppity nerd but it will make me a sneezy one.