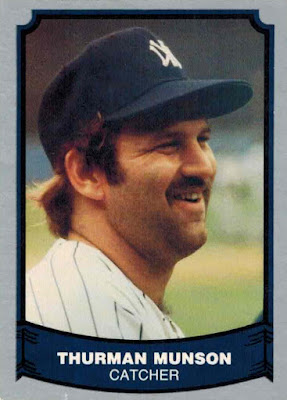 I love today's brand of baseball, but a large part of me still wishes I got to see the game as it was played in the 1970s.

I admire many things about the decade which I've heard so much about from my dad and others around the blogs, not the least of which are the icons it produced. Perhaps it's impossible to determine such a thing in the present, but I often wonder if any of today's greats will be identified as such -- will Trout, Kershaw, and Co. be remembered as icons or merely excellent baseball players?

Time will tell on that one, but here today there's little doubting the '70s produced as many icons as the game has ever seen -- including Thurman Munson who might arguably the most iconic player of the decade and, at least for now, is the focus of this week's Top Five. 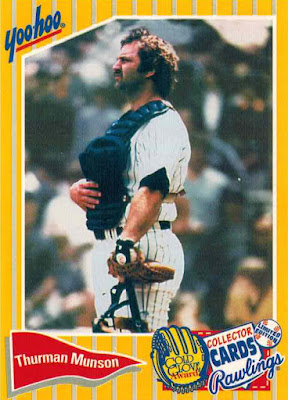 Only after scanning this card -- a fun oddball which slots nicely into my anthems mini-collection -- did I realize that I've never actually tried Yoo-Hoo. 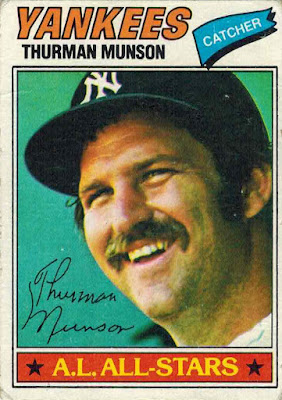 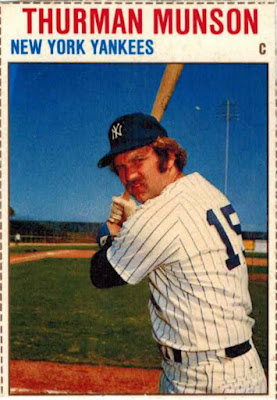 I actually own Munson's complete run of Hostess cards, but despite its somber overtones (it came out the same year Munson died in a plane crash), this one remains my favorite. 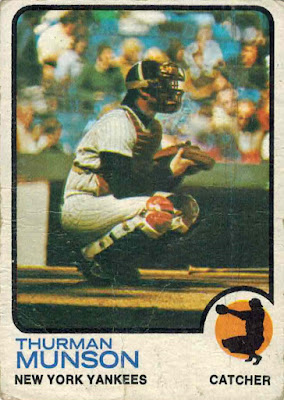 This is one of those cards that might not seem like anything different until you really stop and look at it.

For one thing, look at all those gloriously blurred faces in the background. And also the stray bat at Munson's feet. And also I can't think of many cards off the top of my head that feature a catcher all alone in his crouch (without any trace of a batter), or a shot of a backstop as seen from the first-base side of the field.

This isn't one of Munson's more talked about cards -- I rarely, if ever, see it mentioned -- but it's long been near the top of my list. 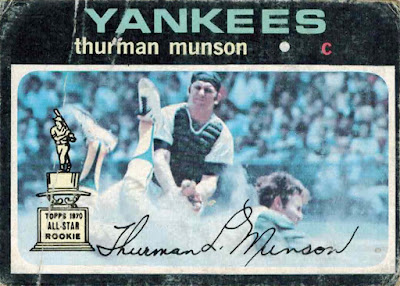 Let's be honest: we both knew what #1 was the moment this post went up.

I've managed to assemble nearly 1,000 different cards for my Play at the Plate mini-collection, and as far as I'm concerned, what you see here is the very best. The horizontal layout, the behemoth Rookie Cup, the sheer action of it all: this is one of those images that comes to mind whenever I hear the words baseball card. And better yet, the A's runner is actually a pitcher (Chuck Dobson), which adds quirk value to an already memorable piece.

It's an iconic card of an iconic player, perhaps as close to perfection as Topps has produced...or will ever produce.
Posted by Nick at 1:26 PM

Whatever you do, don't mix yoohoo with hot dogs. I did that once a few years before that card was issued, and still remember the unpleasantness that followed.

That 1973 is one of my favorite cards of all-time.

That Yoohoo card is pretty neat... but the 71 definitely takes the cake. I'd be willing to bet that if 10 people created their own version of this list, 8 would go with the 71 too. I know I would.

Two thoughts which came out of this post:
1) I need to track down that Hostess Munson.
2) I haven't had Yoo-Hoo since I was a kid, and I thought it was nasty then. Might it be one of those things (like cauliflower) which I hated as a kid and enjoy now? Probably not, but maybe I should try it.

FYI, Yoo-Hoo is sorta kinda like carbonated chocolate milk. I always think of the commercials Yogi Berra used to do for Yoo-Hoo.

great list! he was my brothers favorite player growing up. So I always took a liking to him. Another great post. You have inspired me to do my Top 5 as my next post. Thanks!