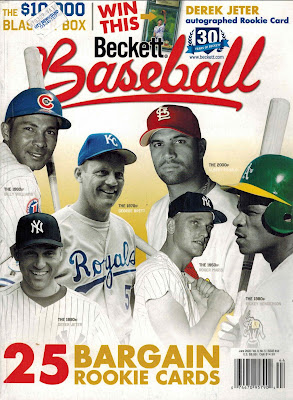 I've been making a (somewhat halfhearted) effort to clear out some excess space in my room, mainly because I live every day in fear of becoming a hoarder.

Among the items I deemed worthy of a purge were my stack of old Becketts, which date from as far back to 2001 (I was nine years old) to around 2011 or so. I've long since stopped buying the magazine -- I honestly don't even know if they still print it anymore -- and my distaste for the Book Value phenomenon Beckett helped popularize has been well-documented on this blog.

But although my Beckett fandom remains a thing of the past, I still felt a pang of something when I moved those old magazines into the trash pile. 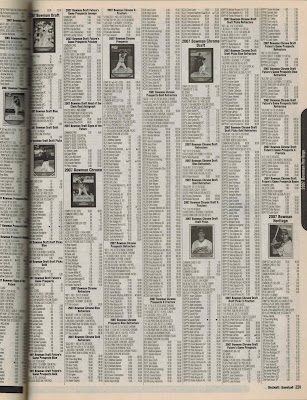 I couldn't help but flip through a couple of my treasured old Becketts this afternoon.

There was a time when I intently reviewed every page of every magazine, reading that tiny text, looking for those up and down arrows to see what was hot and cold. Not because I had any of the hot cards themselves, of course -- it was mainly for pleasure more than anything.

At the very least, flipping through old Becketts is often good for a laugh -- Chris Coghlan's Bowman Chrome rookie autograph was on the rise as of this issue...from June 2009. 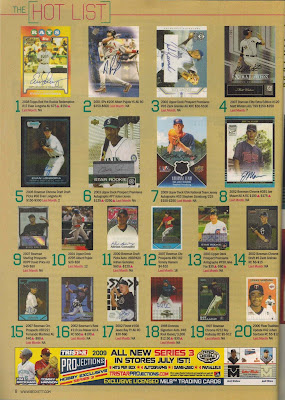 When I was a kid, "big" cards like these seemed to exist in a different universe, and seeing them all in one place made reading through Beckett's Hot List a monthly pleasure.

These days, I own exactly one of the Hot List cards from June 2009 -- Johan Santana's Fleer Tradition rookie at #20, which I found in a dime box a couple years ago -- but again, it's fun now to relive the absurdity of some of the names here (Jake Fox? Fernando Martinez?). 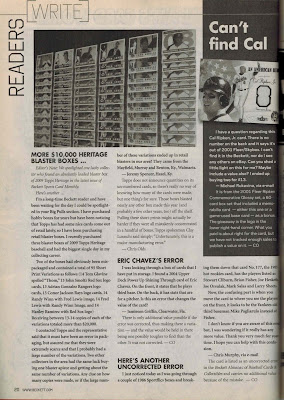 While my fascination with Book Value died somewhere around 2010 or so, there was a brief period of time in which I still bought Beckett for the articles alone.

Most issues were good for at least a couple fun reads, like this one, which documents the luck of a collector in Kentucky who, thanks to a massive printing error at Topps, pulled dozens and dozens of extremely scarce SPs from a 2009 Heritage blaster. They're valued here at more than $20,000 all together.

While this was almost ten years ago now, I have to say I'm still a bit jealous. 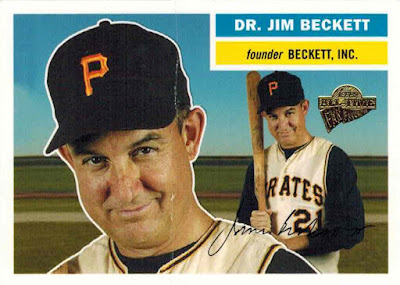 Even though the magazines are gone, remnants of Beckett will always exist in my card collection.

This Jim Beckett came special with one of my Becketts long ago, and you can attribute the giant crease running down the middle of it to my futile efforts to pry this card from that icky booger-like material magazines often use to affix free items (note to Beckett: not a great idea for usage with baseball cards). 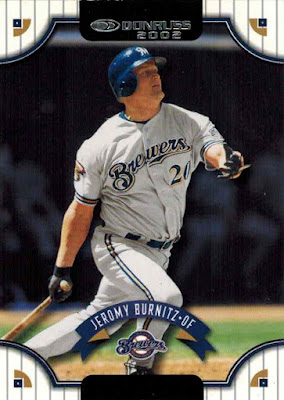 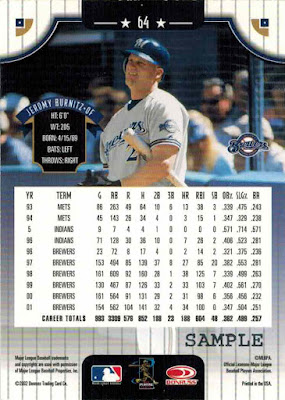 I could be wrong, but I seem to remember that a few of my first Becketts came with sample cards like these.

In hindsight, I'm surprised Beckett didn't include cards with more of their publications, because what better way to get someone to buy a baseball card magazine than with FREE BASEBALL CARDS? 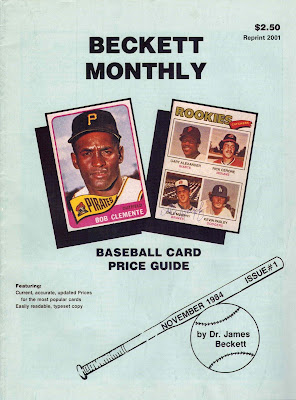 This is a reprint of Beckett's first-ever (mimeographed!) publication back in 1984 -- it came special with a 15th anniversary issue in 2001, and yes, I'm keeping this. 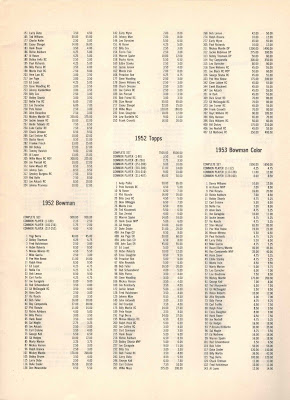 I've flipped through this historic reprint many times just to see the inflation of vintage card prices over the years. 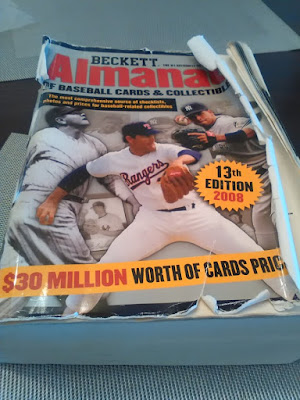 And while I'm finally due for an update and/or replacement by now, I'll also be keeping my Beckett pride and joy: the volume I refer to as only The Big Book, which contains listings for every known card set as of its 2008 publication.

As you can see by the sorry shape of the tome itself, I've consulted this thing endlessly throughout my collecting career. Not so much for the values, but for the reference: finding SPs, hunting for oddball sets, discerning checklist sizes, etc., etc. And while I may not like what Beckett has done to the hobby in terms of perceived "value," I do thank them with all my heart for this catalog, as it's made my collecting life immensely easier on so many occasions.

But for now, I must part with the Beckett magazines of my youth, a seemingly innocent purge which produced more nostalgia than I ever thought possible.
Posted by Nick at 6:16 PM

Yes, they still print the price guide. Get this $9.99 per issue, and they start at 1980, if you want vintage pricing that's now a separate price guide. I've had a subscription for a few years now and pay $38.50 for the whole year. It is time to renew it, and I don't think I am. I haven't looked a price up in years. So I don't need it really.

Lotta joy in those pages,i remember you looking forward to every new issue...but yeah,gotta keep the hoarder thing in check!..smart move!

When I first got back into collecting, I would buy a Beckett here and there ... mainly because I wasn't sure how I wanted to go about everything. Eventually, I stopped buying them. Eventually, it got to the point where I don't really put "value" on anything in my collection because "value" can be a subjective matter. Whenever I see someone bust out a Beckett to give me a price on a card, I immediately cringe as I know it'll be some ridiculous price they're going to quote me. Now, every now and then I'll flip through one of their magazines at Walgreens or something or thumb through one of the giant books at the local library while my son plays in the kids area. The only I really use them for currently is to occasionally watch their "Box Busters" videos on YouTube or use their articles for reference when I'm trying to spot short prints or variations.

I parted ways with 90% of my Tuff Stuffs and Becketts sometime last year. It was taking up way too much space, so I kept a few issues and recycled the rest. It was a little painful to see them go, but months later I realize it was something I should have done 5 years ago.

Since the Trading Card Database has supplanted the Beckett site for researching sets and players, I haven't been on the Beckett site for years.
While it was nice to have a central source of information for the first several years, unfortunately it degenerated into the hype machine that brought about sick mojo hitzz and the rookie craze.
I've always considered low book to be a reasonable price and high book to be full retail. "50% off book" isn't usually a useful or attractive rate, since the low book price is less than half a lot of the time.

I threw out my Becketts a few years ago, but not before taking some covers. They had some nice drawings for awhile on the inside covers. I have one of the 1909 or 1908 World Series hanging up in my classroom