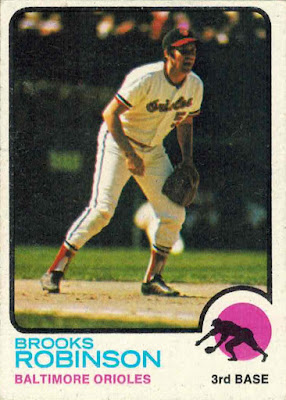 No real reason for featuring Brooks Robinson in this week's "Top Five" other than the fact that he's a guy I collect who received consistently terrific cards throughout his career.

This '73, for example, is one of my favorites from the legendary checklist (and one of Topps's five best sets, I think), but it isn't even one of Brooks's five best cards, in my opinion.

So, without further ado, let's take a look at the cards that did manage to crack this week's Top Five. 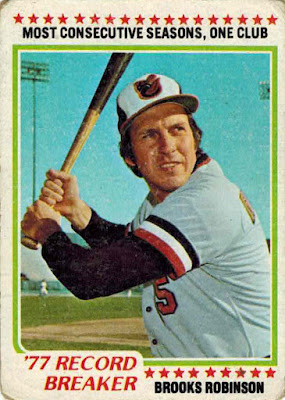 One of the great mysteries of cardboard lore is how Brooks Robinson earned a place in the Record Breaker subset in '78 Topps...but was somehow left out of the regular base checklist.

As a result, this goes down in history as one of the strangest final tributes in recent memory, a definite oddball in my sunset collection. 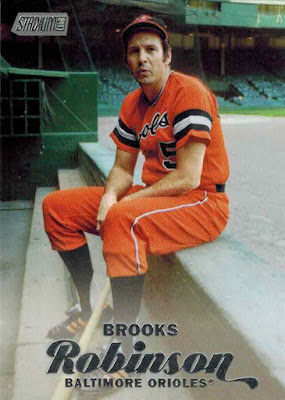 A rare sighting of the short-lived orange alternates the Orioles wore for a few games in the early '70s, and I think you can see why they didn't last long. 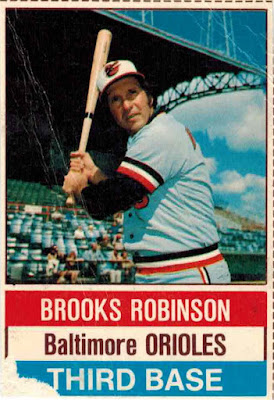 Still one of the greatest cards I've ever found in a dime box. 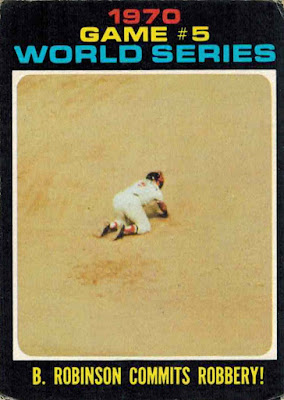 Perhaps the most zoomed-out (and most sand-filled) image I've seen on a baseball card, which, as a result, makes it looks like poor Brooks is crawling in the last moments of life on a deserted island. 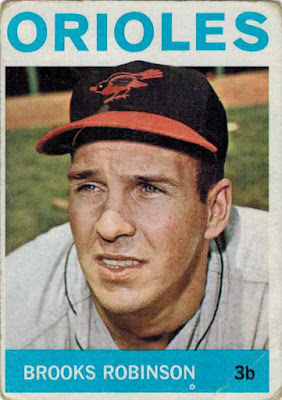 My dad has a lot of stories from his card-collecting youth, but this is the subject of perhaps his most often-told tale.

My dad went to exactly one card show when he was a kid -- shows were still kind of a new thing at the time, and his parents weren't quite as supportive of his hobby as he is of mine. The only thing he really remembers about that show is buying a stack of cards with this very '64 Topps Brooks Robinson at the top of it, where it stayed as a prized possession of his until his collection was given away or thrown out years later.

It's fitting, then, that my dad actually bought this very '64 Brooks for me at a card show a few years ago -- it brought our two collections together over the span of many years and cemented a spot for Brooks at the very pinnacle of my own collection.
Posted by Nick at 4:26 PM

Yeah!...nice to see the #1 Brooks...it was my favorite card in my whole collection!

No mystery, really. He got a record breaker because he broke a record. He didn't get a regular card because he wasn't going to play in 1978.

I got that card free, in worse condition than yours, at a card show years ago. The dealer had it marked free, just ask, so I asked.

That 1971 Topps World Series subset card is awesome! I also like the 1973 Topps used at the beginning of the post. Not sure if I own a copy of either. If not, I might need to find some affordable copies on COMC.