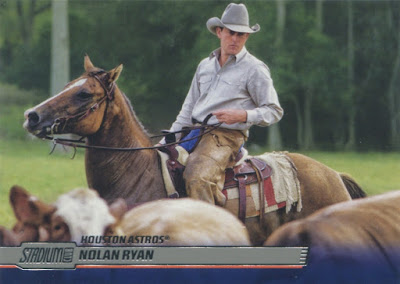 I don't know if I'm like other bloggers, in that I often feel insecure about this little blog of mine.

I'll admit, there is an urge, however faint, to simply pack it all in during times like these: sometimes I consider the possibility of retiring to the ranch and joining the glorious world of Blog Readers out there. 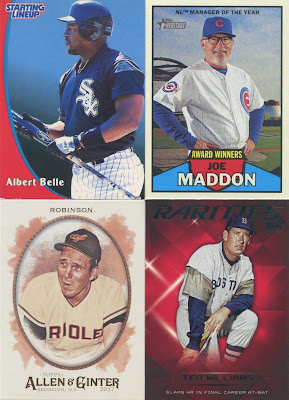 This, of course, is nothing more than an urge: after the ebb usually comes a flow that wipes out any thought of shutting down the blog (and the brief period in which I did retire the blog a couple years ago was an unhappy time).

But should I ever decide to join the rank of Blog Readers, I know one thing won't be lost: the ability to assemble masterful trade packages. Readers in the past have been some of my favorite trading partners, and that trend continued with some packages I received from a couple new members of their ranks.

The first comes from Reader David who, in addition to crossing off a longtime Dime Box Dozen need with the Cowboy Nolan Ryan at the top of this post, also provided a nice mix of oddballs and recent wants alike with this quartet. 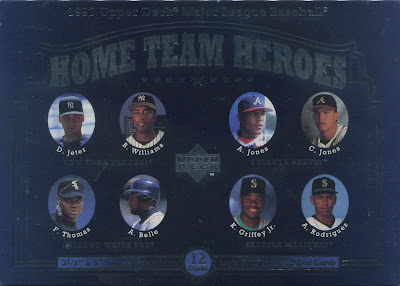 I always, always, always enjoy receiving boxed sets in trades -- doubly so if I've never heard of the box set in question, as was the case with this compendium of 1997 UD Home Team Heroes. 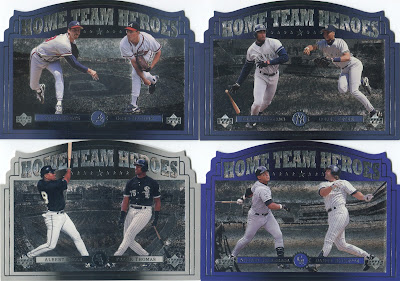 These oversized oddities feature pairs of teammates on a silver backdrop of said players' home ballpark (or at least their home ballparks as they were in 1997, many of which have since been renamed or no longer exist).

All these years of reading and writing later, there's still nothing quite like the discovery of a new oddball set I never knew existed -- and thanks to David, I was able to feel that thrill once more. 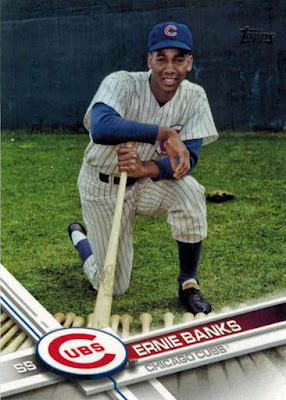 Reader Robb also reached out to me recently saying he had some cards to send me (and as a blogger, is there any better email to get than an I'm-sending-you-some-cards email?).

First up was this terrific Mr. Cub SP from last year's Update which features some of the greenest grass I've ever seen on a baseball card. 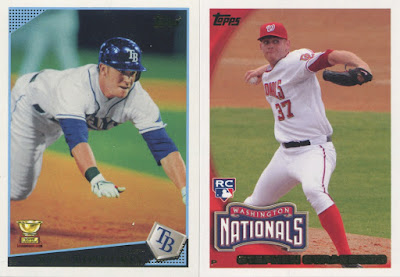 There's no way you'd be able to tell from the scan, but these are actually Berger's Best reprints.

The cards they reprint these days seem to be getting newer and newer which, in turn, makes me feel older and older. 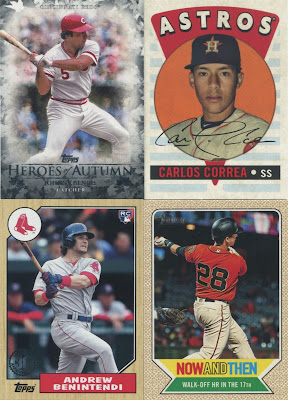 More ticks off the ol' want lists from Robb. 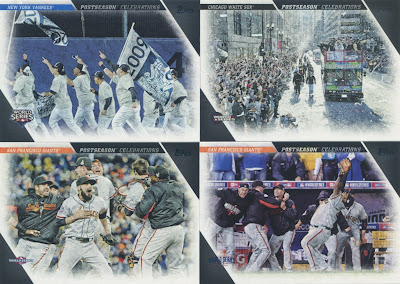 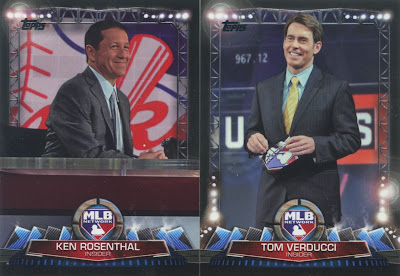 Two of my favorite baseball writers in the media today from last year's MLB Network insert series, a set build which was at one time a high priority but has since turned into somewhat of an I'll complete it when I complete it kind of thing. 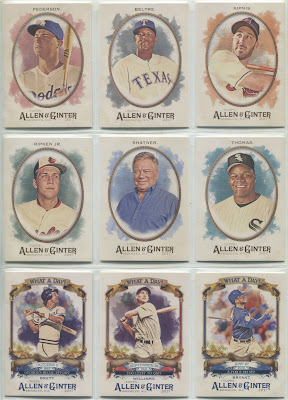 A page of 2017 A&G -- and somehow that centerpiece is just one of two cards William Shatner received last year. 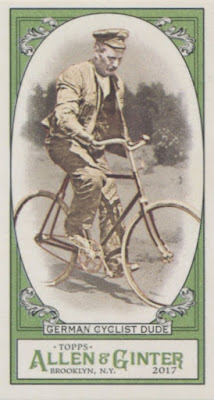 I'm quite shocked by how hard it's been to find these Dudes at card shows and the like. I almost never see them, and when I do they're priced way above what I want to pay. Which makes it all the more exciting when people like Robb send me Dudes like German Cyclist Dude here out of the blue.

Maybe readers like David and Robb continue to put together such excellent trade packages because, unlike me, their minds aren't preoccupied with such silly and mindless insecurities of blogging life. And maybe, in some backwards way, a post about insecurity helps shed some of the insecurity, because here I am, eager to write, excited to show off some great cards I've received, all with a Diet Coke at my side.

Perhaps this is why I've chosen the life of a Blog Writer: the ability to vocalize thoughts about something as trivial as baseball cards to a select group of select people who enjoy the trivialities as much as I do.
Posted by Nick at 6:13 PM

I've been there (in fact often am), Nick. My posts have dwindled but I always find that I want to keep going. Love the Banks card.

I do have to say that I read every blog post you write. Your blog is one of my favorites, and I look forward to each new entry you write. I know I owe you some cards, and hope to get some to you soon. Keep up the great job!

"and as a blogger, is there any better email to get than an I'm-sending-you-some-cards email?:"
Nope, that's the creme de la creme of e-mails!
As TSHenson said, love reading your stuff... don't always comment, but I'm always reading.

I think the problem is that you're drinking Diet Coke.

Anyway, I think you need a little Zap. Luckily for you I just finished putting one together...

I've been in a slump lately too, just haven't felt the urge to write for whatever reason. That being said, it'd be a sad day if you ever pack it in Nick. Your blog is one of the ones I always make sure I read whenever it's updated. I may not always have time to comment but I'm always reading.

Nick, you're one of the best writers in our community - a critical thinker with a crazy recall for stats and cardboard history in general - and witty on top of it all. I have a huge stack of cards for you which really needs to be sent soon. You are accumulating cards so quickly, the stack will be quite small by the time it's packed. Stop it. ;)

Keep up the blogging! I enjoy reading your stuff and envy how often you are able to dig through bins of cards.

Nice Ernie SP by the way-- I have yet to see that one.

i get it, low to no comments sucks desire right out of me, but i suck at writing posts to start with it. you on the other hand write well, always interesting.

I notice there is something going on in the whole of the card blogosphere. Less posts, shorter posts, less enthusiasm. It used to take me two hours to read every new blog post every morning, now it takes me on average a half hour.

I have to admit that I'm forcing some out myself, just so I can get something posted. I still have a queue from a project I started in 2015 that is coming in handy to fill a gap when I have nothing else to say.

Although we really don't collect much in common at all, I hope you continue posting. I try to read all of them that you publish, and I especially enjoy your Short Term Stops series.

Billy is right. It may be the time of year or something. Don't give it up dude.

I've always seen blogging as something I do for myself, audience be damned. If you're enjoying it, keep doing it no matter how many responses you get. If it's turning into a drag, don't keep slogging through just because you feel obligated to post for us.

Keep you head up man. Its probably a time of year thing with the viewership. Whenever things go stale for me I often just start posting about other things like WVU, beer and travel. When trade packages dry up I'll just throw a mini contest which forces me to mail packages out.

Dude. If I sculpted a Card Blog Mt. Rushmore... you'd be up there. Your dime box finds are legendary... as are the gifts you receive from your pops. But bottom line... you gotta do what you feel is right. I agree 100% with Nick Vossbrink and his comment. Just know... if you write them, they will come.

For what it's worth, I have similar feelings of insecurity, exacerbated by my sporadic posting schedule of late, but I will echo what many others have said above. I always look forward to whatever new post I see from you. I'll admit that I don't comment on anyone's posts nearly as often as I should, but I'm always reading.

As many of the others have said, I go through this myself. It's tough when you see so much interaction on other blogs, or when you write something that you think will receive interaction and it's nothing but crickets. I've definitely thought of taking a nice, long hiatus myself.

I can say that while I open and glance over hundreds of blogs, yours is one of the ones that I pay the most detailed attention to. Keep doing what you're doing, friend!

Figures, I've been the most prolific in writing posts than I've ever been. But that's probably because I keep buying tons of stuff.

I do think quite often that I could write better than I do. I look back on the posts I put up before I dedicated the blog to cards and those are much more entertaining and funny than some of the rants and complaining that I put up on cardboard topics. I think it was a different time in my life when I was a bit more joyous (not that I'm depressed now or anything.) I'll never be as insightful as you and Night Owl, but I can go deeper than I usually do.

Not only do I enjoy your blogs about cards,also like your book recommendations.I just enjoyed reading The Summer Of Beer And Whiskey,thanks to your recommendation. Keep blogging please.

I think it's natural to have blogger insecurity once in a while. I've deleted dozens of posts and at least three blogs, but I'm here to stay - whether anyone reads my work or not.

From what I've seen yours is one of the most popular and respected blogs in the community. And your card show finds are legendary. Keep up the great work!

I've felt this way numerous times Nick, hope you stick with it as I truly do look forward to each and every new post. I go through little slumps from time to time but here I am 10 years later still going, truly hope it goes the same way for Dime Boxes!