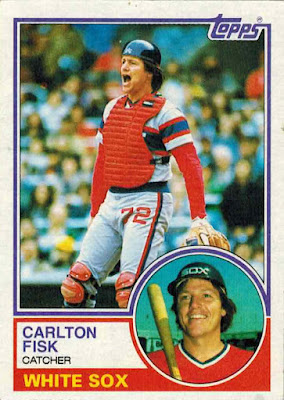 Over the years, I've looked for reasons why I should collect something rather than reasons not to, and I suppose this has either be a peril or a joy depending on how you look at it.

Many of my collections have been triggered by an article I read or a story I heard. Sometimes it's not even that much. Maybe a year or so ago, I was looking through the handful of Carlton Fisk cards I owned. I didn't have many because he wasn't a guy I ever felt much of a connection with. But that day, for whatever reason, I thought to myself: this guy's a legend, a hometown favorite...why am I NOT collecting this guy?

I couldn't come up with a good answer, and so a collection was born -- a collection which now houses well over 100 cards, the Top Five of which I've selected for today's post. 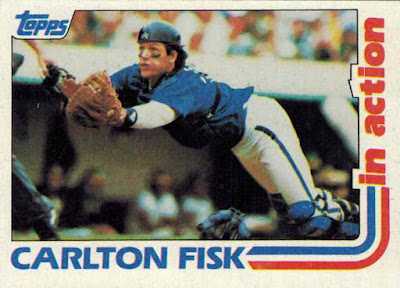 One of the greatest cards of the '80s -- and now that I think of it, probably the only non-league-leader horizontal of the decade (why am I just now realizing this?!). 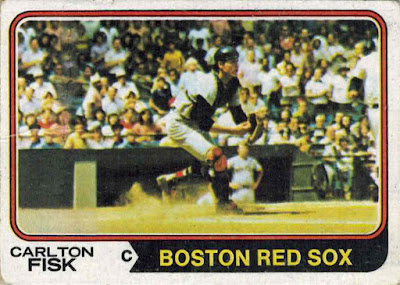 It's been a joy to collect Carlton Fisk because the guy has some just plain fine cards out there.

So many, in fact, that otherwise memorable ones tend to get overshadowed -- this '74 Topps is a gem I don't see mentioned too often in the Legendary Vintage discussion. 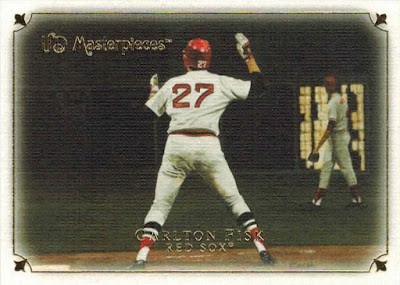 I own many, many cards featuring Fisk's dramatic game-winning homer in the 1975 World Series, but none do it better than this one from UD Masterpieces (one of the few epically-named sets to live up to its moniker). 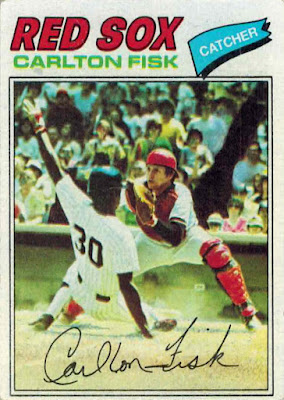 Few cards sum up a single rivalry better than this one, perhaps the most famous image from '77 Topps. 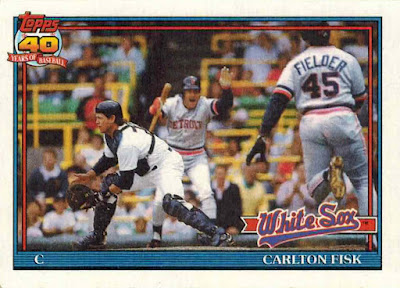 I wonder, as a Tigers fan, if Fielder scored on the play.

I just commented on Matt (Once a Cub) blog about a card that the guy reminded me of Wood Harrelson, but that 77 Fisk, certainly favors him too.

I completely understand you starting up a collection of Fisk. I read an article in Baseball Digest... a single article... and went on a mission to start collection Al Kaline that ended up with me buying 15 different autographs. Eventually I realized I was obsessed and had neglected other PC's, so I stopped.

Maybe because I'm a dyed in the wool North Sider but I still think of Fisk as a Boston guy. Great cards.

Those are some great choices for Fisk cardboard.

these cards are prime examples why i collect catchers, and why Fisk is a favorite. excellent selections!