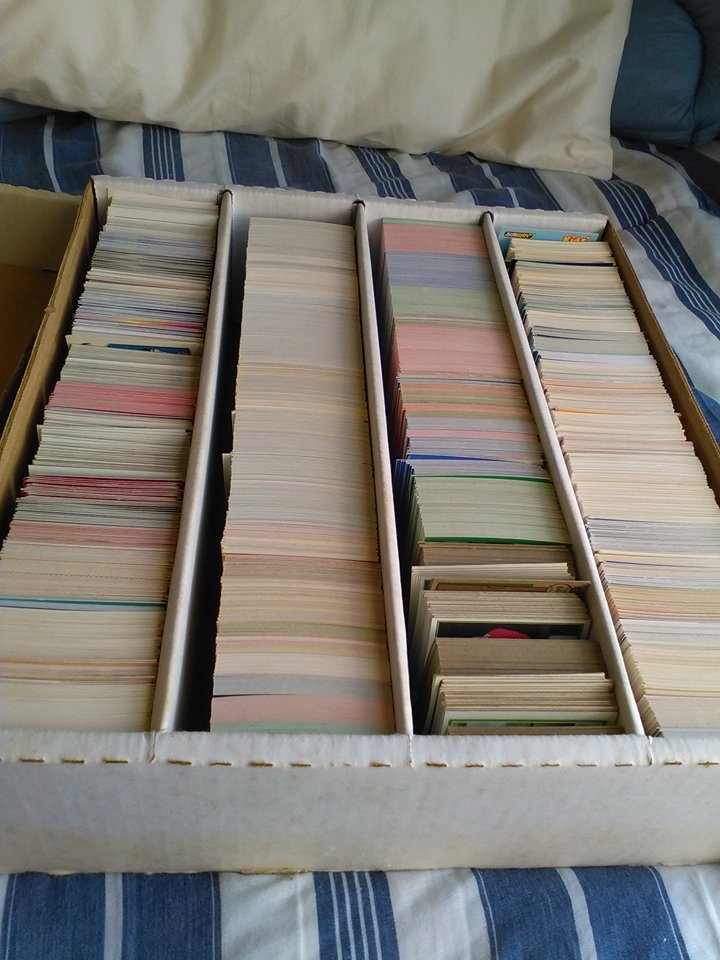 In a store which once seemed so improbable, the impossible happened: I actually found cards at my local Goodwill.

The funny thing was that while I'd made many a trip to Goodwill specifically in search of baseball cards (all to no avail), cardboard was barely on my mind when I found these a couple weeks ago (I was actually looking for jeans and a belt). But on my way to the cash register I took a haphazard stroll past the randoms section and looked down and HOLY HELL IS THAT A BIG BOX OF CARDS?!

Truth be told, this isn't the first time I've found cards at a thrift store. It is, however, the first time I've stumbled upon anything this substantial and also the only time I've purchased such a thing from a local Goodwill (it's generally acknowledged around the Chicago area that you usually have to travel into the thrift stores in the deeper suburbs to find anything worthwhile). 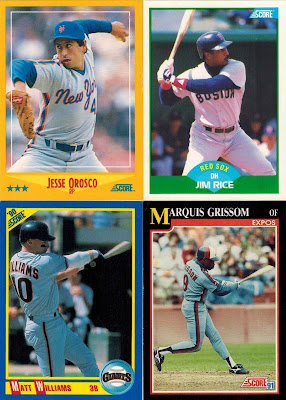 My other fear was assuaged when I took a peek inside: a good 90 percent of the cards inside were baseball.

And that sealed it: this thing was coming home with me. I lugged the big white box to the register, plopped it on the counter, handed over the money, and went on my merry way, my car not seeming to go fast enough to get me home to the moment when I could crack open the lid and bathe in all that cardboard.

One thing immediately became apparent after the first couple handfuls I pulled: whoever owned these in the past really liked Score. A good 75 percent of the cards inside were Score-brand cardboard.

And while Score's first four releases came during the height of the overproduction era, they remain my four favorites in the brand's history (look at all those colors!). 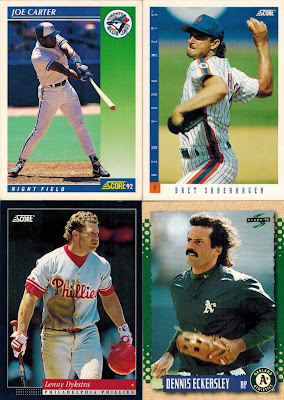 In the end, my Goodwill box offered a nice little timeline of Score's history, starting with the vivid colors of 1988-91 to the relative dullness of 1992-95.

Granted, I do like the dirt borders of '95 quite a bit more than most people (I mean, when else has dirt been used as a color scheme?!), but it still pales in comparison to anything from those first four years. 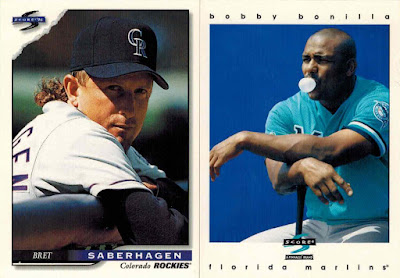 You could say 1996-97 represented somewhat of a dead period in Score's history, which, in a backwards way, made them the most fun to see considering I owned less from these sets than any other year of Score (ee cummings would be proud of the all-lowercase '97s). 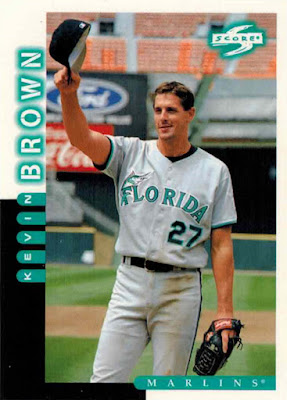 Score retired from the hobby in 1998, and while there weren't a ton of those Final Goodbyes in my box, this one did make for a fine addition to my "tip of the cap" mini-collection. 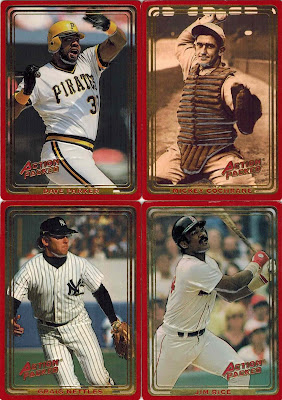 But my Goodwill goods weren't all Score: I dug up a small run of these awesome red-bordered Action Packed oddballs at one point, many of which I needed (and believe me, they look much better in-person than they do in this ghostly scan). 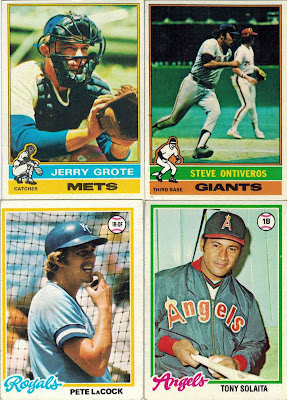 There wasn't anything huge in there (no Brett or Molitor rookies or anything), but it wasn't a complete bust. In an odd way, vintage Topps is so common at card shows that I don't even flip through them. And while I have most of what I need for my player collections by now, some fun randoms have managed to slip by me all these years, like these four.

And how did I not already own a card of Pete LaCock?! 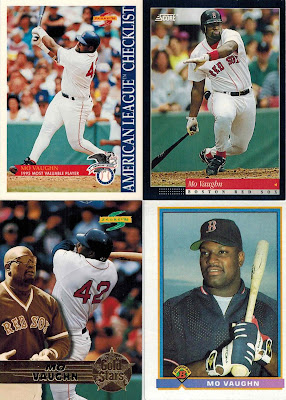 I knew there was a reason I decided to start collecting Mo Vaughn. 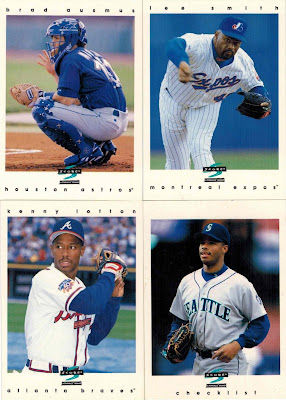 It seems to be that '97 Score is especially hard to find these days, which means that I still needed all these for various player collections of mine. 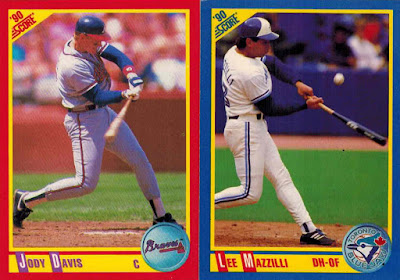 Two short-term-stop/sunset cards from '90 Score I somehow didn't already own. 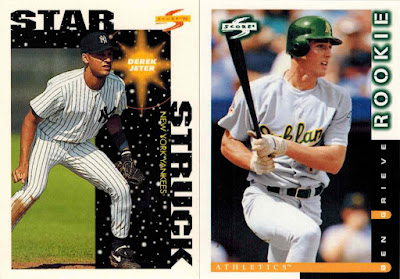 Both of these men were AL Rookies of the Year -- only one of them routinely shows up on lists of all-time busts, however. 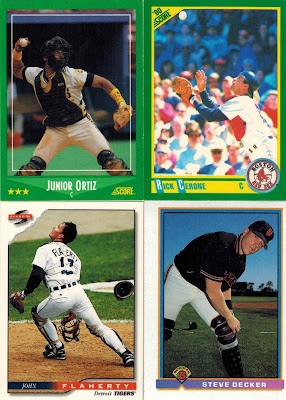 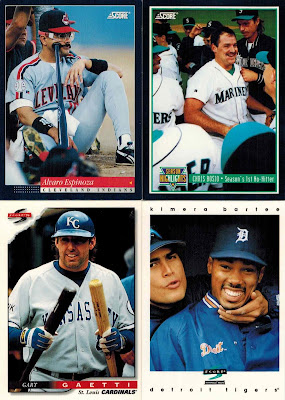 More fun from mid '90s Score (and only now did I learn that I share a birthday with Alvaro Espinoza). 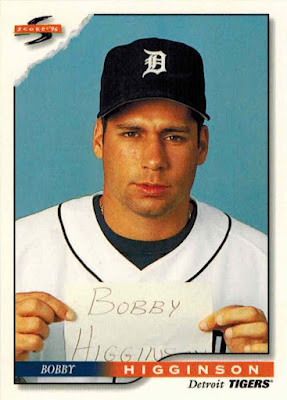 My Goodwill box was easily worth the $14.99 I paid for it well before I stumbled upon this Bobby Higginson, a card which, I kid you not, was the very next card I was set to add to my Dime Box Dozen list.

These name-card shots were somewhat of a thing for a short while in the mid '90s -- I can think of at least two other examples off the top of my head -- but this one was high up on my want list because I'd owned the Dugout Collection parallel for years...without the base card.

And after many years of searching this dime box and that, there it was in the unlikeliest of places: inside a plain white box sitting on the bottom shelf of my local Goodwill, underneath golf balls and power tools and trophies with the names of others emblazoned in faux-gold.
Posted by Nick at 6:28 PM

Nice score! .... pun fully intended. I think my favorite years of Score baseball cards are from the mid to late 90s as they really had some nice quality sets that they put out. If I ever find a box like that at my local Goodwill, I might have to take the plunge as well.

Awesome. That is a step down memory lane for sure!

The only time I find cards at my local Goodwill, they throw a handful of cards into Zip-loc bags and the cards always seem really beat up. Never seen them sitting in a 3,200ct. box. Nice find.

Really like that Jeter card!...now all i need to do is find decent records at Goodwill..
NOT,haha!!

Nice find! I've had no luck finding cards at Goodwill or any thrift store.

I, like Fuji, have only come across the mini stack of cards in the ziplocked bag in my Goodwill. Those and opened packs of Pro Line. Great find!

There was a box just like that at my local GW, but it was full of junk wax, so I passed.

Can't beat that find! Congratulations. It is what we all hope for. I've gotta start hitting the Goodwill stores. I always forget when I'm in the area. Again great stuff.

Awesome find! I remember when the 1990 Score set came out. Everybody wanted to get their hands on a factory set because of the great action shots and the Bo Jackson specialty card. They were readily available at card shops, drugs, heck, even gas stations! That set brings back such memories.