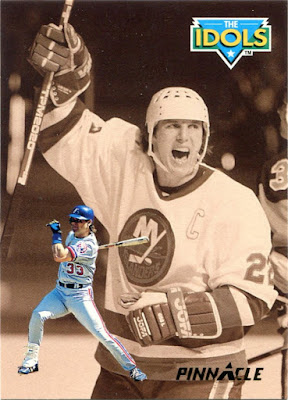 I've taken to hitting thrift stores over the past year or two.

Even if I ultimately come away empty-handed, thrift store runs are still a lot of fun. That's probably what I enjoy most about them. My friends and I crack up at board games from our youth or hopelessly outdated cassette players.

Up until this week, I hadn't yet bought any baseball cards from a thrift store. Sure, I'd seen them, but they were usually your garden variety boxes of 1990 Topps and 1991 Donruss. You can't pay me to take those.

On Monday, a friend and I hit a thrift store about a half-hour away from the Chicagoland area, because the shops further from the city seem to have the better items, oddly enough. And, after about ten minutes in the place, my friend exclaimed Hey, Nick, they have baseball cards!

I virtually ran over to find a half-dozen long 800-count boxes sitting on a shelf, all priced at five bucks each. One was mostly football and basketball. Pass. One was all 1991 Topps. A great set, yes, but not one I need many cards from. A couple others were about half-and-half between baseball and other sports.

One, after a quick peek, appeared to be just right, so I forked over a cool five-spot for it at the register. A few hours later, the box would be sitting in the backseat as my same friend and I went to Wrigleyville to celebrate the Blackhawks' Stanley Cup victory.

It was a crazy scene, and these cards saw it all. 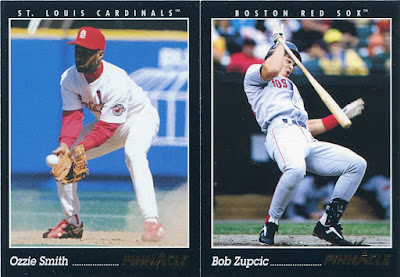 I found a few sporadic football singles inside, but, outside of that, it was almost all baseball.

What initially drew me to this particular box was the fact that it housed a few hefty stacks of early '90s Pinnacle, which, as I recently discussed, is one of the more underrated brands around. The singles were particularly heavy on the 1993 edition, one that I don't own many cards from in the first place.

The design was a little intrusive that year, but the outstanding photos were certainly typical of Pinnacle. 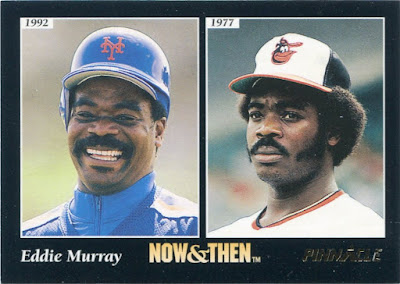 I've always had a soft spot for this "Now & Then" subset, if for no other reason that it brings a little '70s grooviness to a '90s product.

Guess Eddie Murray's mighty sideburns were out of style by 1992. 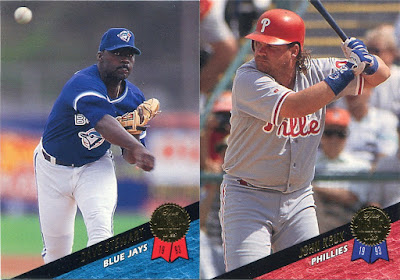 While it was mostly Pinnacle, this box did provide samples of a nice array of brands.

Heaped among the madness was a stack of 1993 Leaf, a set that I still think is one of the best all-around designs ever produced. 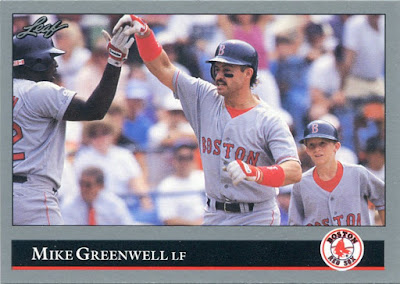 I'm not as wild about Leaf's design from the year prior, but this is still a nice card.

I spy a bat boy cameo. 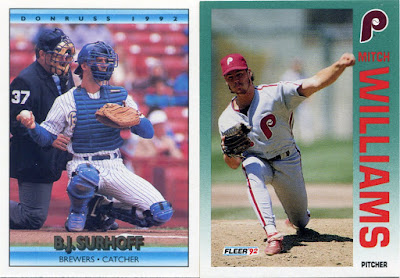 With the diversity of designs I found in this box, I knew full well that they wouldn't all be winners.

These two 1992 releases have never been among my favorites. Yes, I have warmed up to '92 Donruss a bit in recent years, but it's still not much more than mediocre. You can be rest assured that I'll never take a liking to '92 Fleer.

Just a terrible effort all around there. 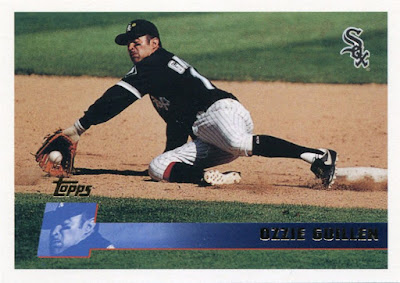 About a couple dozen 1996 Topps singles were speckled around this thrift store find.

I've never met a collector in the universe who actually likes this set. It just escaped falling into the Bottom Five of my Topps countdown. (It finished at #58, or sixth-worst.)

But the fact of the matter is that I still need quite a few of these cards for my various collections, and this Ozzie Guillen is actually a halfway decent shot.

Chalk it up as one of the few times you'll hear me complimenting 1996 Topps. 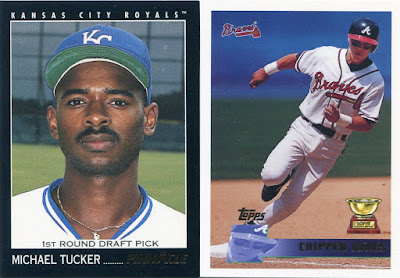 With all the early '90s greatness in this box, I had a slight hope of finding something big, something like a Derek Jeter or Mariano Rivera rookie.

That didn't happen in the end, but I did end up with a few future stars. That's my first rookie card of longtime outfielder Michael Tucker, and dig Chipper Jones with the Rookie Cup.

They grow up so fast. 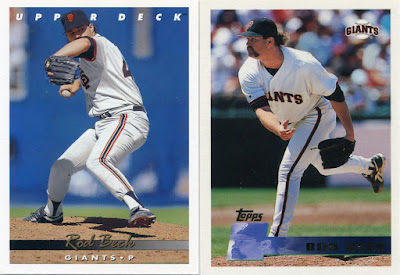 The box even produced a couple newbies for my budding Rod Beck collection.

That '93 UD Shooter is now my oldest card of his. 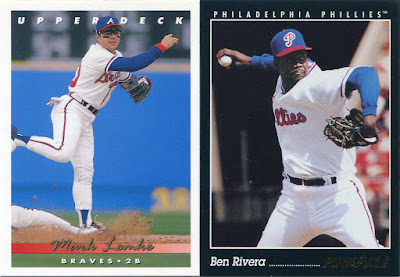 These will go down in history as the first mini-collection hits I scored from a thrift store. 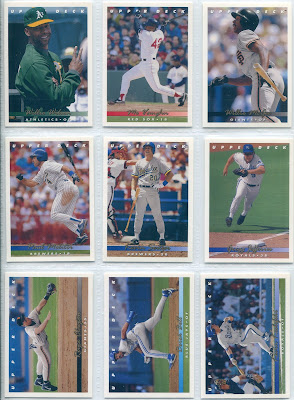 ...these cards quickly stole the show.

I feel like I say this every day, but every time I think I've seen all there is to see from '93 UD, a boatload of new gems present themselves.

I found a whole page full from this box alone. 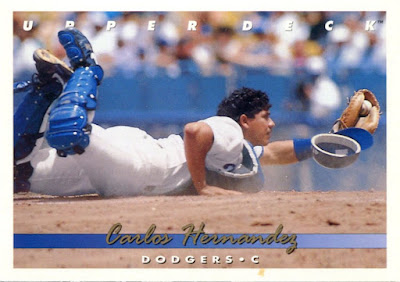 So that's about it for this five-dollar thrift store find. Anything Earth-shattering? Not really. Did I find cards I needed? Certainly. Was it worth five bucks? Most definitely. In the end, that's really all I can ask out of cards from a thrift store.

Perhaps the day will come where I'll find a '52 Mantle at the bottom of the thrift store shelf. Perhaps.

For now, I'm fine with a five-dollar box of commons.
Posted by Nick at 6:02 PM

If I'm not sick to death of set blogs by the time the '71 and '85 Topps ones are done, you may well see a '93 UD blog from me. I completed it in the first year of my blog and it's really the only UD set that matters.

I've been tempted lately to do a quick tour of the twin cities' thrift stores to find some cards- I think cities have less interesting stuff than smaller town thrift stores just because more people are around to snap up anything that might be remotely of re-sale value.

The best baseball related thrift shop find I've ever had was a Yokohama BayStars t-shirt that somehow ended up in Joliet; I've never found any baseball cards though - let alone any as good as you unearthed there!

I feel odd now since I kinda like 96 Topps. I guess you are saying there isn't an urge to start a 96 Topps blog? Let me say, its not my least favorite, but it would be closer to middle of the pack.

I do agree on 92 Fleer though. Overall it sounds like you got a good deal. I probably would have bought a couple of the boxes if I saw them, I would just hope they wouldn't be mostly 92 (or was it 93) Stadium Club like I got the last time I went to a local flea market.

After I was done booing Mike Bossy on the card at the top of the article, I did some quick searching to find out who the baseball player on the same card is... I needed to know that Larry Walker gets booed because Mike Bossy is his idol.

Revisiting my old binders from the junk wax era, the '93 UD just leap off the page. I must've loved it as a 9 year old too because I owned way more of it than Topps or any other set from that year. One of these days I'm going to have to buy a complete set off eBay.