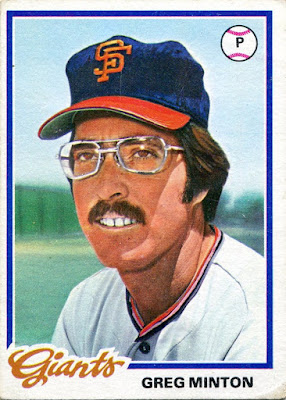 If I can manage to scrape a little money together, I'm hoping to hit the Chicago National in a couple months.

The obvious reason I'd like to go is that, yes, I want to buy cards, cards, and more cards. On top of that, though, I'm looking forward to putting some faces to the names of the blogosphere, as I'm guessing that at least a few members of our blogging brethren will be in attendance.

It is a joy to meet a fellow blogger face to face, as I've learned during the few times Jeff and I have met at card shows over the past couple years. It's a good way to give cards to someone without having to pay obnoxious shipping costs, too.

You may remember that I had a fun in-person meeting with reader Brian at what turned out to be a pretty solid LCS. The cards I bought that day were nice, but Brian gifted me an envelope of hand-picked cards from his own collection that were even better.

Among the goodies was this infamous '78 Topps Greg Minton, an airbrushed masterpiece (or disaster?) that I'm a little ashamed to admit I didn't own until my meeting with Brian.

I think someone at Topps got a little carried away with the paintbrush, because almost nothing about that photo looks even halfway authentic. 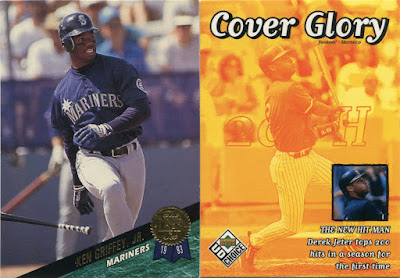 Brian dropped the star power on me with these two.

It's always a treat to receive anything from the 1993 Leaf set, one of the best efforts of the '90s. 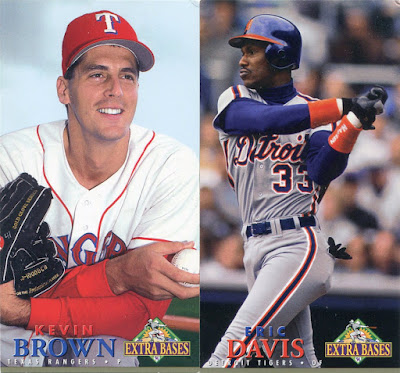 Here's a pair from the ill-fated Fleer Extra Bases checklist.

I used to think that bigger cards like these were a pain, because MY GOD HOW AM I GOING TO STORE THESE THINGS?!?!?!

As of late, though, I've taken to placing oversized cardboard in the little pockets that come on the fronts of some of my binders.

They look a lot nicer that way. 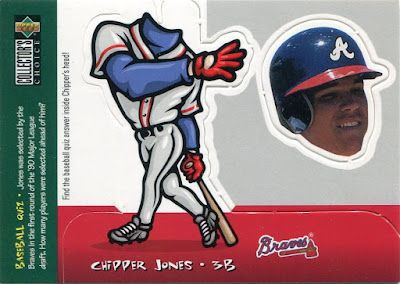 I remember these quirky oddballs from my early, early collecting days. 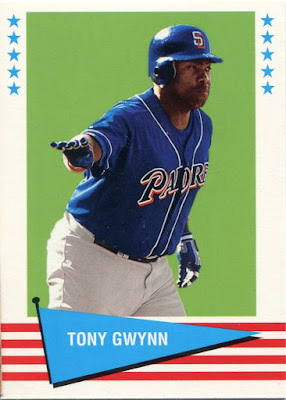 From what I remember, Brian is currently undertaking a grand reorganization of his collection.

He's been pulling cards for me as the project has progressed, and, from the looks of it, he bought a decent amount of 1999 Fleer Tradition back in the day.

This neat insert of the late Tony Gwynn honors the often-forgotten 1961 Fleer Greats of the Game design. 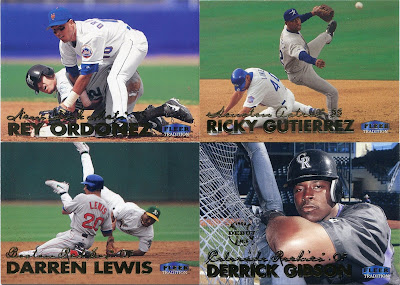 As I learned with my last Just Commons order, the real beauty of this set lies in the base cards.

I don't know if Brian remembered that post or if this was just sheer coincidence, but I'm glad he made Tradition a large part of this in-person swap either way.

This quartet of horizontal greats furthers my appreciation for this gem of a set. 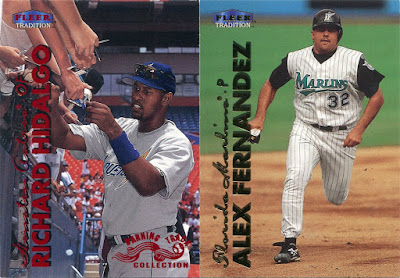 As do these two vertical beauties.

The Hidalgo (an "autograph" shot, no less) is actually a red-lettered Warning Track parallel. I've found that '90s parallels can be absolutely impossible to find, as I think I only have about one or two other Warning Tracks in my collection as we speak.

Brian found a diamond in the rough there, no doubt. 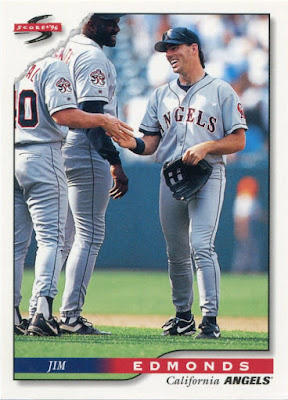 The other common thread amongst all of Brian's randomness was the repeated appearance of 1996 Score.

I hear a lot about Score's early days from the late '80s, but not much about its efforts from the mid '90s. The brand was on its last legs by the time 1996 came around (it'd be defunct two years later), but it still put out some terrific and often unheralded designs. 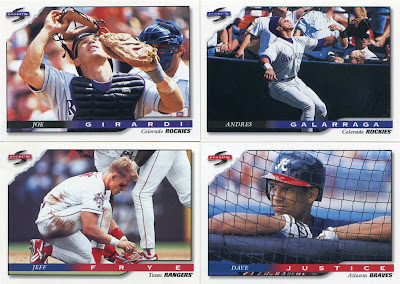 Score could do horizontals with the best of 'em. 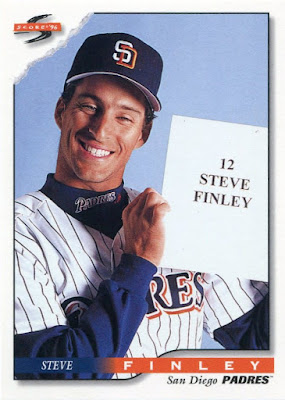 Brian's envelope closed out with what takes its place as perhaps the goofiest card in my collection.

His name is Steve Finley, in case you didn't know, and he gives Bob Hamelin a run for his money.

As great as these cards are, they're really second nature compared to the joy of being able to meet a fellow collector and blog member like Brian in person.

If my National plan becomes a reality, maybe I should bring a little placard with the words DIMEBOX NICK scrawled across the front of it. That way, people would, you know, be able to recognize me.

You can thank Steve Finley for the idea.
Posted by Nick at 6:21 PM

I've conducted a handful of trades in person before. Unfortunately it's a lot harder when you live in a country as large as America. Have fun at the National :).

There are people in the blogosphere I *should* meet with in person and trade with. But, well, it just never happens.

That Greg Minton, by the way, always puzzled me as a kid. He looks orange enough to be an Oompa Loompa.

Glad you like, Nick. I did remember your post about the newfound love for 99 Fleer Tradition, but wasn't aware of the love for 1993 Leaf. I'll keep my eye out for those as I prep the next package (which already is quite sizable!).

That Gwynn is great, love the simple design and I am also a fan of 1993 Leaf.

I'll be at the National this year - I'll be the one asking about 1965 O Pee Chee and 1964 Topps Venezuelan at every table...
My brother lives in Chicago, so I tend to get out there every so often, just to put you and any other Chicagoland bloggers on notice.

Nick, Just get a tee shirt made up! I bet you're twitching for time to pass huh?