Cool to me, cool to you 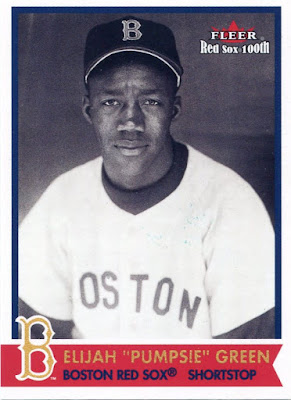 Sometimes, I feel a little bad for people trading with me for the first time.

My more frequent trade partners know how easygoing I am with what cards I enjoy. But I often get emails from new collectors wanting to set up a swap, and a lot of them ask what I collect. I wish I could tell them I collect this team or this set or this player, but...my collection isn't nearly that tidy.

So I often tell people to just send me whatever cards they find cool, and I fear that such a task might be a little intimidating because what might be interesting to one person might not be to the other. But fear not, prospective traders, because my perception of cool has matched up to pretty much everyone I've ever dealt with.

I mention this because Shane of the awesome blog "Shoebox Legends" recently sent me a package full of randomness, followed by a small PWE about a week after that. Though we've both been in the blogging business for a while, we somehow hadn't traded or talked much before. But it quickly became obvious that Shane fell right into step with the usual randomness we see around here.

The PWE he sent resulted in my very first card of Pumpsie Green, who, upon signing with the Red Sox in 1959, became the first black player on the last team to integrate. 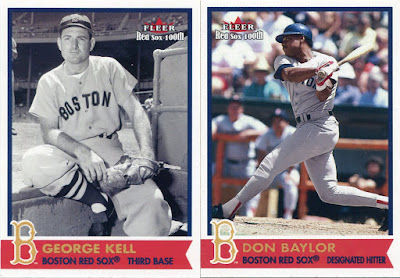 I'd owned a few prior to this, but not nearly enough. The checklist covers a lot of names, big and small, from the long, long history of the Red Sox. The way I look at it, it's kind of the Topps Total of Sox history.

I can't say I've seen many cards of George Kell as a Sawk. 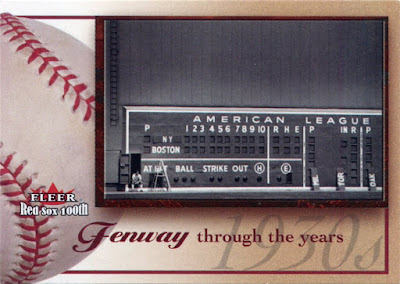 Here's a rare appearance of the Green Monster on a piece of cardboard.

It's not often I get excited over cards of inanimate objects, but this is definitely one of the exceptions to the rule. 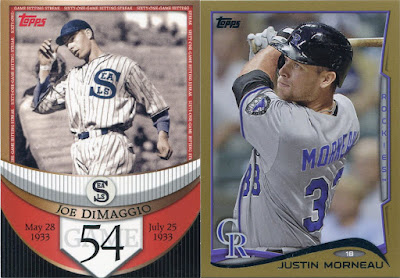 Shane strayed away from his Red Sox roots with the rest of this package.

Most of those sets are flat-out boring, but I have to give a little props to this one, commemorating Joltin' Joe's 61-game hitting streak as a minor leaguer in 1933.

It's not every day you see DiMaggio in a San Francisco Seals uniform. 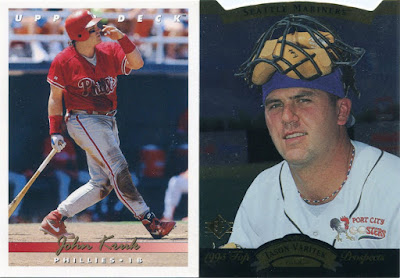 These two qualify as "cool" in my book.

There's yet another gem from the '93 Upper Deck checklist that had previously flown under my radar. That may be the single dirtiest uniform I've ever seen on a baseball card, and it looks perfect on John Kruk.

And, I don't think Shane knew it at the time, but the Varitek fulfilled a longtime "zero-year" need of mine as a collector. Until this package, I hadn't been able to nab a card of the future Red Sox catcher during his time in the Mariners system. 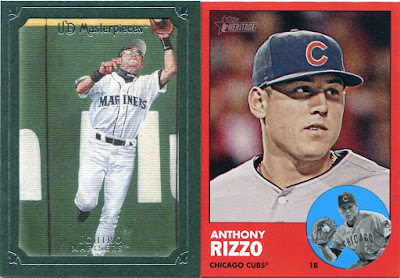 Shane moved onto a couple of my favorite players from there.

I've collected Ichiro for about a decade longer than Anthony Rizzo, but Rizzo is starting to move up into the first tier of my player collections as of late.

He's all set to join guys like Ichiro at the top. 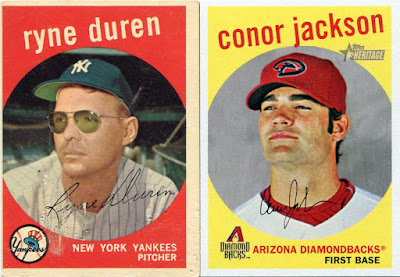 These look stunning next to one another, showing just how good of a job Topps did with Heritage in 2008.

Thanks to Shane, you can add Ryne Duren's Coke-bottle shades to the fold. 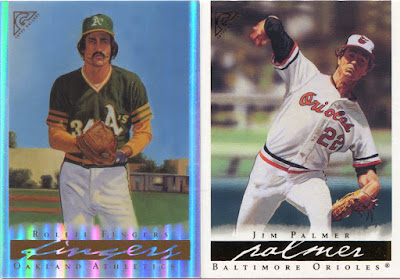 I'm not usually huge on art-exclusive base designs, but this Topps Gallery set is a beauty.

The cards are extremely well-done, and the foil parallels add a spark to what is already a stunning design.

Still, if we're talking '70s legends, one card Shane sent blew them all out of the water. 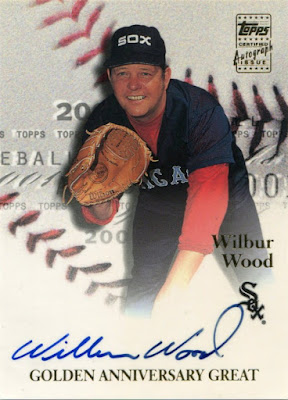 Here, we have something that I didn't even know existed in the first place.

I talk a lot about how much I appreciate the more colorful stars of the '70s (Fidrych, Spaceman, Dock Ellis, etc.), but, while I'm not sure he had the personality of those guys, Wilbur Wood has always been side-by-side with the Dick Allens and Jose Cardenals of the '70s baseball universe to me.

Here's just a few reasons why:

2) He was a knuckleballer who played for the hometown White Sox.

4) The man is a legend, plain and simple.

I can assure you that this is probably the best autograph I have ever received. The card is a masterpiece within itself, but the sheer surprise of it took things to a whole other level, since I had no idea that Shane was going to send anything like this my way.

First trade or not, these cards knocked it out of the park.
Posted by Nick at 6:42 PM

The DiMaggio is a very cool card. Just hooked up with Shane at a show this past weekend. Great trade partner

Glad you liked the cards Nick. I'll definitely be hitting you up with PWEs from time to time!

We both posted about certified autographs from subjects off the beaten path today, but I think yours is by far the coolest!

Love those gallery cards never seen a foil one, nice

Wood has a certified auto?

Obviously I have some of that Red Sox set too. It's very cool, but packs were like 5 bucks, so I couldn't buy very many.