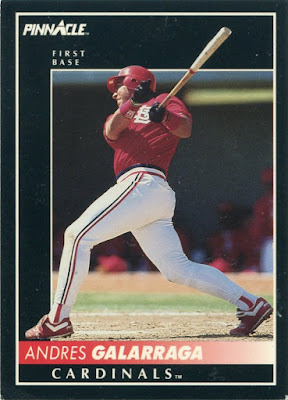 When I happily reminisced about Ultra a few months ago, I thought the whole "brand timeline" deal was going to be a one-off idea.

I revived the concept with Collector's Choice last month, and, once again, had a lot of fun writing it. So, yes, I think this "timeline" theme actually a thing now on this blog. An accidental thing, at that. A lot of us have the designs of big-time brands like Topps and Upper Deck etched into memory, but the efforts of, say, a brand like Pinnacle might slip the mind sometimes.

What I hope I'm doing with these posts is, at the very least, refresh our memories of such brands, and I think Pinnacle is a great example. The overproduction era saw a slew of new brands come into the fold, and Pinnacle shot into the hobby like a cannon in 1992.

This is, in my opinion, the best inaugural effort of any brand in the history of baseball cards. It may well be the darkest design known to man, which is actually a good thing, I think. I particularly enjoy the fact that a lot of the photos reach out of the frame and actually bleed into the black borders.

A lot of what companies churned out during the overproduction era was bright, flashy, LOOK AT ME material.

If nothing else, 1992 Pinnacle reminded us that a little darkness can go a long way. 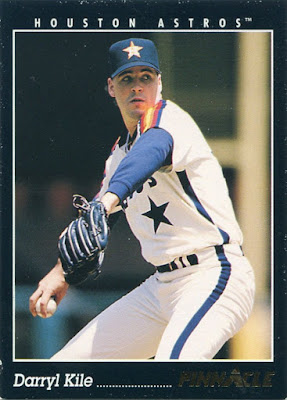 Pinnacle continued the "Back in Black" theme (to reference a song I've never much cared for) in 1993.

If I had to guess, I'd say that these were the first Pinnacle cards I ever saw. I seem to have a vague recollection of finding a few discounted packs somewhere during my early collecting days in the late '90s.

Black is still the prominent color here, but 1993 Pinnacle left something to be desired. There's nothing particularly wrong with this design. It just had the misfortune of coming immediately after Pinnacle's epic inaugural release.

I'm not sure any cards could follow that act with any kind of success. 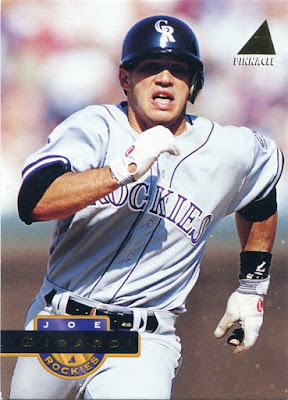 Though the brand was entering just its third season at the time, Pinnacle decided to completely change direction in 1994.

It scrapped the whole darkness theme, choosing to pry the focus away from the design and instead devote its energy to providing collectors with top-notch, full-bleed photography.

Granted, 1994 Pinnacle isn't all that exciting. Not many of the photos actually stand out, which is imperative if you're going to experiment with a full-bleed design.

There was still a bit of retooling to be done. 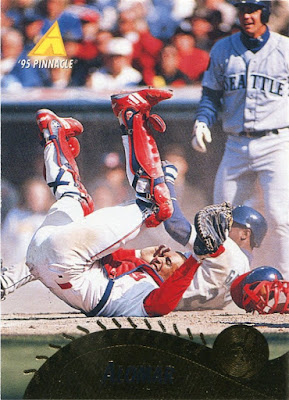 Much like a middling big leaguer who comes out of nowhere to become a star, Pinnacle put it all together in 1995.

Unlike '94 Pinnacle, these aren't fully full-bleed (if I may use such a term) because of the wavy nameplates at the bottom of each card. Though I wasn't sold on it at first, I've seem enough of this set to believe that it probably featured the best photography of any Pinnacle set.

Full-bleed sets can lack character. Design-centric sets can lack a lasting punch. To me, 1995 Pinnacle is a near perfect blend of the two. Most collectors have designs like 1978 Topps and 1981 Fleer etched in their memory.

While I can't say the same about a lot of other '90s sets, I know this design is 1995 Pinnacle the second I see it. 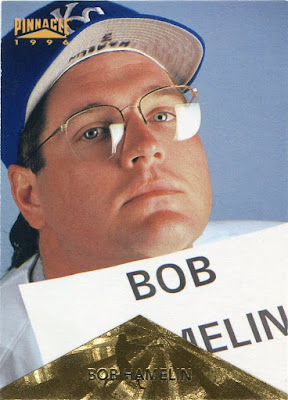 Unfortunately, the same can't be said for Pinnacle's remaining years.

Much like the black-themed cards of its early days, Pinnacle started to become obsessed with gold in the mid '90s. Whereas the gold nameplates of 1995 add a certain beauty to the cards, 1996's pyramids of gold are just plain distracting and, frankly, quite ugly.

I guess the one takeaway from 1996 is the fact that it produced what might be Pinnacle's most well-known card with this gloriously hideous Bob Hamelin.

I can't decide if that's a good or bad thing. 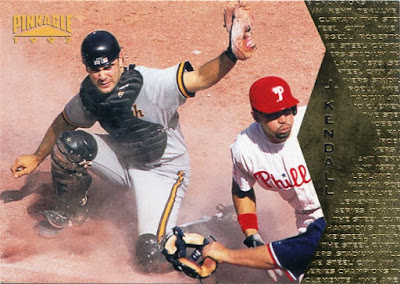 Pinnacle trudged on with the whole gold theme the following year, and churned out what I think was their worst design.

If the gold pyramids of '96 were ugly, then I don't know what to call this strange diamond-infused look. This design takes the word distracting to a whole new level, and, worse yet, it impedes on a lot of the photos. Half of the Phillie baserunner and all but one of the umpire's arms are left out of what would otherwise be a fantastic action shot here.

And, although it may be tough to tell from the scan, but each card features an eyesore of golden vocabulary pertaining to the team depicted on it. I can pick out terms like "Three Rivers," "Steel City," and "Clemente" on this Jason Kendall. (Many of the words are cut off and nearly impossible to read.)

As you might guess, Pinnacle was on its way out. 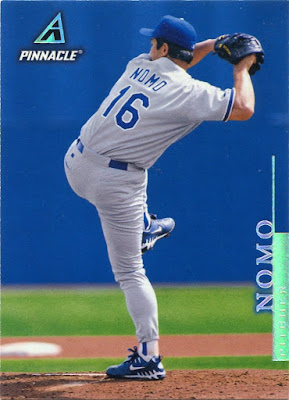 While so many other brands exit with a whimper, I think Pinnacle went out with a bang.

The brand returned to their full-bleed days for their final release in 1998, offering collectors full, unimpeded photos for our viewing pleasure. It even added a touch of shiny with the refractor-ish nameplates and company logos.

Although it didn't receive much fanfare at the time, I think 1998 is the most underrated of Pinnacle's efforts and among the better-kept secrets of the '90s.

From what I've read, Pinnacle was supposed to be released in two separate checklists in 1998, but the lack of success of the first resulted in the second becoming an entirely new brand called "Pinnacle Plus," a mediocre set and the last one the company would ever produce.

Like so many other brands birthed during the overproduction era, Pinnacle came and went within the span of a decade. (I don't consider Panini's 2012 Pinnacle rebirth to be an "official" Pinnacle product.)

For a relatively short-lived company, Pinnacle sure went through a lot in seven years. It started with a killer design, moved onto full-bleed greatness, toiled in mediocrity, and returned for a brief, dying burst of light.

Pinnacle may not have lasted long, but it had a full life.
Posted by Nick at 6:24 PM

Great post Nick. My all-time favorites are the '94s and '95s, especially the Museum Collection parallels. Overall that was a solid run for Pinnacle.

I'm a sucker for black borders, so give me their freshman effort -- I think that was their best.

That Kendall had a chance to be one of my all time favorite cards if it wasn't for that stupid gold.

I remember when the first Pinnacle set came out in 1992. My cousin got a few packs and I was super jealous that he pulled a Tom Pagnozzi card - I can't remember now why that would have been a big deal to me... I was a Twins fan then, too.

A PINNACLE POST! I'm glad I found this one! I'm actually planning on doing a Gwynn & Pinnacle themed post soon, once a Gwynn from the 2013 Pinnacle set comes in from eBay. Loved the brand, especially the '92 set. The Joe Carter card from the '94 set is a gem.