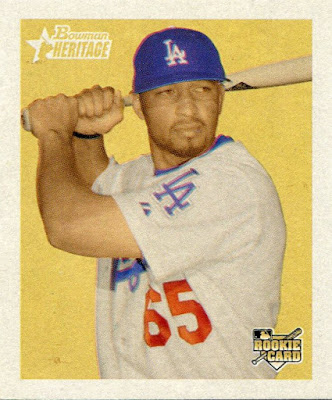 I often think about where my collection would be without the internet.

Without the world wide web, my collecting life would be quite sheltered. I'd have to make do with the precious few in-person card outings (card shows, flea markets, etc.) that I'm able make each year. No online shopping for me. (Granted, I can't do much online business anyways when I'm always broke.)

Even worse, there'd be no blogging community, which means that I wouldn't have a blog to spout off about my random, incoherent musings regarding this hobby. And that wouldn't be much fun.

For all the internet's shortcomings (ahem...selfies), I'm reminded of how lucky I am to be a collector in the age of technology whenever a package arrives on my doorstep. Take a batch of cards I recently received from Tony of the terrific new blog "Tony's Sports Pub," for instance.

I doubt I would've ever owned this neat Matt Kemp rookie mini without the web. 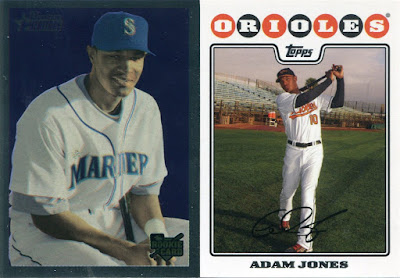 I guess I'm just one of those people who constantly thinks about the "butterfly effect" side of things.

Heck, no internet might mean that I wouldn't be collecting at all. How much different would my life be without baseball cards? Ah, that's way too philosophical of a question for this meandering blog.

Life's too short to worry about things like that. 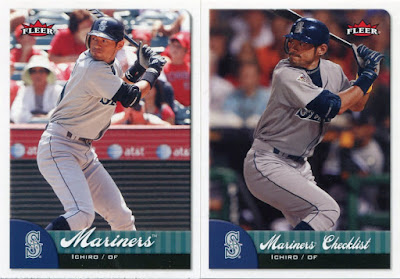 Let's just be thankful we have the internet and focus on some cards, yes?

Fleer went out with a whimper in 2007, and my sophomore-in-high-school self didn't buy many packs of it at the time. Which, of course, means that I need a whole bunch of cards from this set here in 2015. 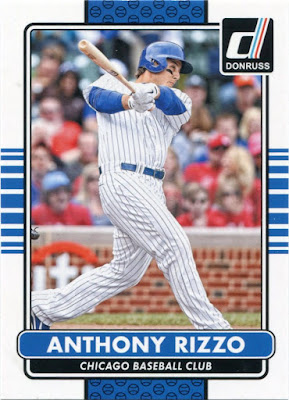 Cubbies comprised the majority of what Tony sent over.

At the time, this was my first look at 2015 Donruss. My initial thoughts on the product haven't changed. 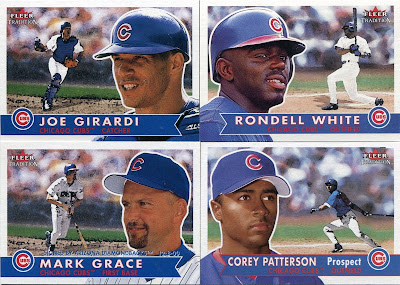 This, on the other hand, is a set I've always enjoyed.

I'm not sure what the "Tradition" in 2001 Fleer Tradition is supposed to imply, because, as far as I know, this isn't a rehashing of an old Fleer design. Nevertheless, it does have an old-timey feel to it, which I can get behind. 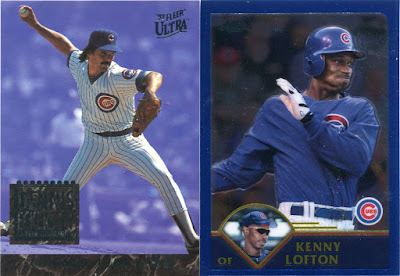 Neither of these guys are well-remembered as Cubs, which means I appreciate them all the more.

Eck had some good years on the Windy City, but his trade to Oakland was basically an afterthought at the time. The Cubs thought he was washed up and shipped him out for three minor leaguers. [shakes head]

Kenny Lofton was a stretch run pickup midway through the 2003 season, and the move sure paid its dividends.

I'm not sure the 2003 Cubs would've made it as far as they did without him. 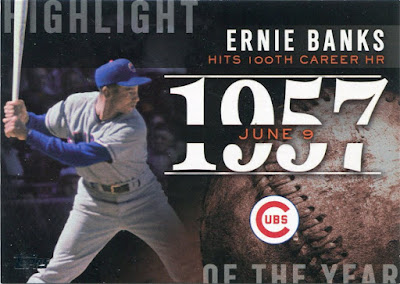 Here's a shiny new 2015 insert of the late Ernie Banks. 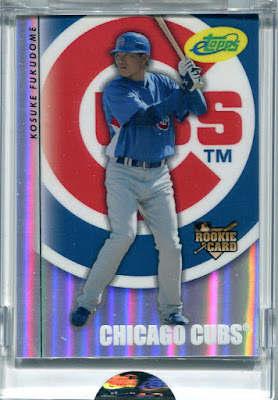 This, I think, was easily the most interesting item Tony sent my way.

I've never been particularly internet-savvy, so I never experimented with the eTopps brand. I'm still not exactly sure how it worked, but I believe it involved acquiring and swapping virtual cards with fellow collectors.

For the longest time, I thought eTopps was exclusively a virtual brand. Only recently did I find out that hard copies of the cards actually existed, and this package from Tony was the first time I'd been lucky enough to add one to my collection.

Yes, Kosuke Fukudome was perhaps one of the Cubs' most dubious free-agent signings, but I still collect him anyways. This is perhaps my new favorite card of the man. (And it's numbered to 1,199 copies.)

Now, should I crack it out of the case or leave... 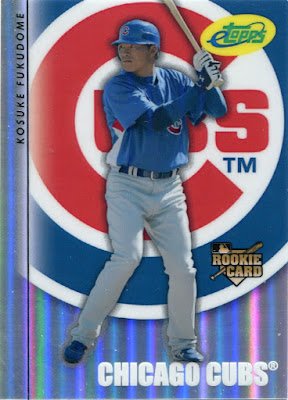 Ain't no way I'm leaving a poor little baseball card trapped in a case. I busted him out about two seconds after it fell out of the package, and I'm happy to report that Kosuke is alive and well. He's living comfortably in a nine-pocket page as we speak.

Baseball cards need to breathe like the rest of us.

If you go back far enough, I really do have the internet to thank for eTopps and blogging and people like Tony and my entire collection as I know it. For that, I'm forever indebted.

But I could still do without all the selfies.
Posted by Nick at 6:40 PM

I'm grateful for eBay, comc, various forums and this blogosphere for the cards I have today and the ones I used to have. Without it, I imagine we'd all be getting ripped off at our local card shop or card show.

I could do with a lot less opinions and the many other horrible aspects of humankind on the internet though.

Now, the real downside is if you read the comments section on literally any news story on any website with so-called news. Talk about trolls...

I'm also thankful for the internet. My collection wouldn't be a fraction as interesting and enjoyable as it is without it. I've really enjoyed blogging over the past few months too.

The internet is definitely what has inspired me to take the path I'm on in school, and this hobby would not be the same for me. I probably would have stopped collecting at around 12 years old if I never came across our blog community. I can go without the selfies too though...

That's a sweet eTopps card of Fukudome. I've toyed with the idea of chasing the 2008 eTopps set because of the list of rookies included in the set (Kershaw, Votto, Scherzer) but not sure yet if I want to take the plunge.

Glad you liked everything,Nick!I bought that Fleer 07 set dirt cheap,only because It had exclusive RC's (Ryan Braun,Alex Gordon,Hunter Pence) that weren't obtainable in packs.I also have the entire '01 Fleer Tradition set,but since I've sold off the Pujols Rookie,I've got no problem breaking It up.

This is a great Cubs package! I'm grateful for the Internet, too, because it led me to a great blog like Nick's. Also, Craigslist's garage sale section directed me to the amazing vintage lot I found last summer. I'm still having tons of fun with those cards via autograph requests through the mail.

eToro is the #1 forex trading platform for beginning and pro traders.