Can I get that in writing? 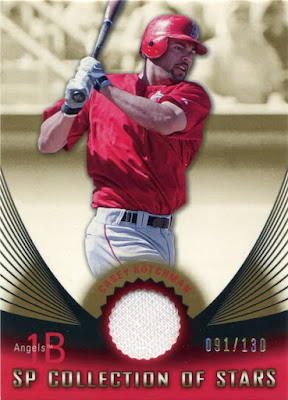 I don't reminisce much about my time on the trading forums these days.

For now, I'll just say that one of the greatest advantages the blogs have over the forums is the much, much, much more informal style of trading. For anyone who's never been on the forums, trades are quite the process.

You have to "post" them with everything you intend to receive/send and then ship out the cards in "x" number of days, or otherwise you'll get bad feedback. In the blogosphere, we say Hey, here's some cards just because, and we often send them without any warning whatsoever.

I recently received a "just because" package from my buddy Gavin over at the fantastic blog "Baseball Card Breakdown," and the inclusion of this Casey Kotchman jersey got me thinking about my early days on the forums when relics were still all the rage for me. Sigh.

Although I'm more than happy to add anything of my man "Kotch" to the binders. 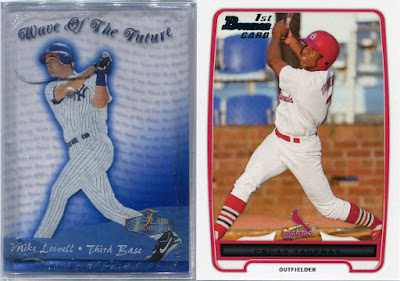 These two cards were probably the closest thing to a forum-style trade between Gavin and I, in that I'd actually claimed both of them from prior posts on his blog.

The Taveras rookie is another notch in my effort to start a collection of the late outfielder, and, in a small way, I wanted the Lowell because he played in just eight games as a Yankee. But let's be honest here.

The real reason I wanted it was because it's a baseball card filled with water. 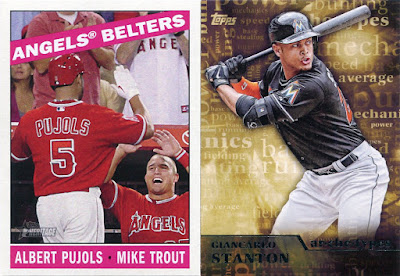 Much of my forum trades were made in an effort to knock out my wants from the latest and greatest sets.

Gavin hit a couple of those with these Heritage and Flagship needs. 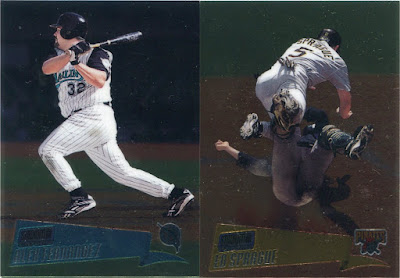 But here's where Gavin's trade package started to branch out into that blogosphere randomness that the forums could never match in a million years.

I'd been subliminally mini-collecting a bit during my forum days (including "pitchers at the plate" and "plays at the plate", but I didn't actually think of a name for it until I joined the blogosphere.

Mini-collecting is one of my biggest joys in the hobby, and I must say that the Sprague is one of the most painful baseball cards I've ever seen. 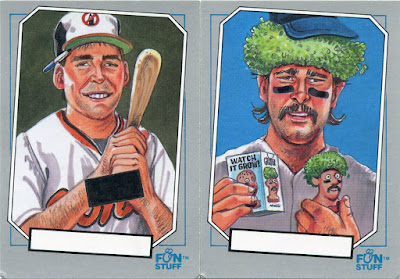 I had a few of these comedic, cartoonish oddballs in my collection prior to this package, but Gavin went ahead and added a few more.

In hindsight, I guess it made sense that he included the blacked-out Billy Ripken... ...because this fell out of the package not too long after.

Gavin's magnificent "Baseball Card Breakdown" original magnets have been making the rounds around the blogosphere lately, and I'm happy to finally own one. (One of just five copies, to boot.)

As you can probably tell, Billy Ripken's infamous "F--- Face" scribble is photoshopped onto Cal Jr.'s bat knob in this custom masterpiece, all while sticking with the standard '89 Fleer design.

It's the only baseball card I own that sticks to my refrigerator, and I see it every time I go to grab a soda. 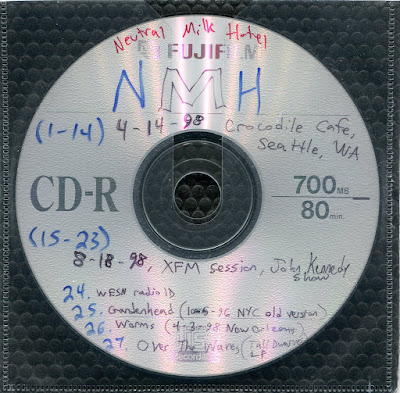 I can honestly say that this is the first time I've ever received CDs in a trade package.

I remember from a few of Gavin's past posts that Neutral Milk Hotel is one of his favorite bands, which explains why he sent two of their CDs to me. (There's another one on the other side of this case.)

I've never dabbled much into them myself, although they do seem to come up a lot whenever I'm using Spotify.

I pretty much have to give them a shot now. 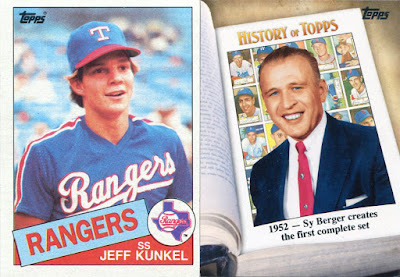 For Gavin's grand finale, I ask this riddle.

What do Jeff Kunkel and Sy Berger have in common? 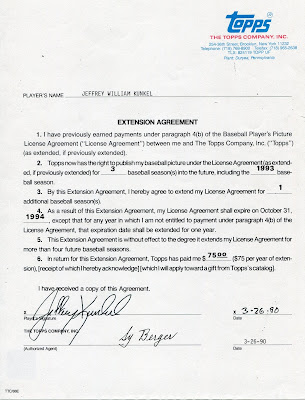 They both appear on this authentic Topps contract.

Gavin, as you may remember, picked up a few of these things earlier in the year. I honestly had no idea they were available to the public before then, and knew that someday, somehow, I wanted to own one.

Thanks to Gavin, I didn't have to wait long, because Jeff Kunkel's 1990 Topps contract (good for a whopping $75.00) waited inside this trade package. It was immediately followed by the sound of my jaw hitting the table. (Gavin even included the cards of Kunkel/Berger I just showed to sweeten the pot.)

I thought they looked insanely cool through my computer screen, and you better believe they look a million times better in-person.

Unlike the forum scene, Gavin was under absolutely no written obligation to send me this contract. But he did anyways because he thought I might enjoy it, and that I most definitely did. You won't see much of anything like this on the forums.

The blogosphere wins every time.
Posted by Nick at 6:42 PM

Glad you like!
Expect another PWE from me to arrive any day now.
I don't think the Fun Stuff cards were from me, though! Somebody else's trade package get mixed in a little?
As for the CDRs, yeah, I didn't need them anymore and so they've basically been waiting to be given to somebody.. thought maybe you'd dig it. If not, oh well, throw them away.. but given a chance, I think NMH could be up your alley.
Thanks again for the trade!

I know what you mean when you say the blogosphere is more casual and laid back than the forum scene. Although that's probably because they're more concerned about value than this blogosphere really is.

Pretty awesome package from DefGav. Ever since he first blogged about the contracts I've thought about getting one for my PC as well. I might in the far future when Torrens' contract expires and is sold lol.

I've never traded via a forum before...sounds like it would annoy the hell out of me.

It's been awhile since I've been in the forums. It's great to read people's posts... but in terms of trading I agree with you 100%. I definitely don't miss the "back and forth" haggling and dealing with unreasonable collectors. For me... the care package/blogger thing is a much more comfortable avenue.

Yeah forum trading is stiffer and more demanding than the blogiverse. I am delinquent in a few forum trades (and also a few blog trades/agreements as well ugh) party do to the stiffness of things. I agree it is mostly the exactness of card x,y & z for cards B through H.

Right now my biggest problems are procrastination and disorganization. Also that four letter word "\^/@]%](" (work) gets in the way taking up too much time out of the day (and out of me).

Wow, I hope Gavin is ready for all the trading partners who are going to say "Hey, where's MY Topps contract?!?"

Very nice, I keep telling myself I need to keep a closer watch on the Topps Vault, maybe I should keep an eye out for contracts.