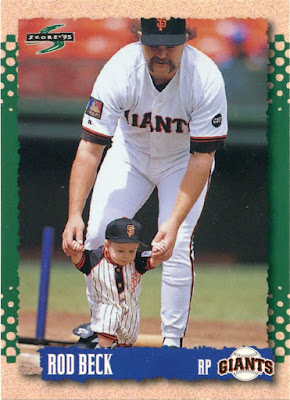 Guys are either "in the binder" or they aren't. The non-binder guys are the only ones eligible for my frankenset, but the "binder guys" are probably the more prestigious class because of how long I've had them around. I'd say about 95 percent of my "binder guys" have been with me since my early collecting days.

I'll occasionally induct a new guy into my binders for a few different (and sometimes arbitrary) reasons. Most are young rookies who burst onto the baseball scene. Other times, I'll hear an interesting factoid about a guy that endears me to him, such as Pat Neshek's card collection or Alex Liddi's born-and-raised Italian roots.

Most of the players I enjoy are in my binders, and, for that reason, I feel like I've accomplished what I've wanted to accomplish with my collection. But I'll be the first to admit that my system (if you can call it that) isn't exactly perfect. For whatever reason, some guys still do fall through the cracks from time to time.

One of those select players, as I recently found out, is Rod Beck. 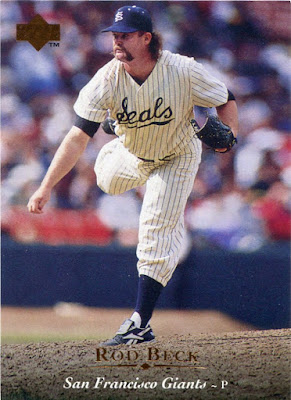 The man they called "Shooter" hits on so many of my baseball checkmarks, which makes it even more mind-boggling that I wasn't already collecting the guy.

I tried to figure out why he wasn't already in my binders, and couldn't come up with a single reason.

I mean, look at this guy's resume.

1) Rod Beck, as you might know, enjoyed many of his finest seasons as a fireballing reliever with the Giants in the mid-to-late '90s, right around the time I was starting to get into baseball as a kid. 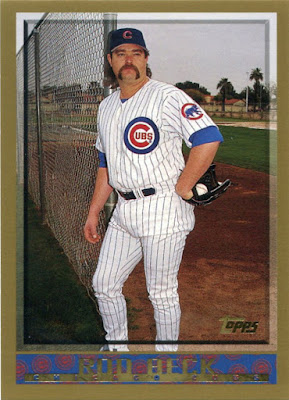 2) He pitched for the Cubs during one of the extreme few points of my life when the Cubs were actually good.

Although I was only six at the time, I have a vague recollection of him retiring Joe Carter to end Game 163 against the Giants in 1998. 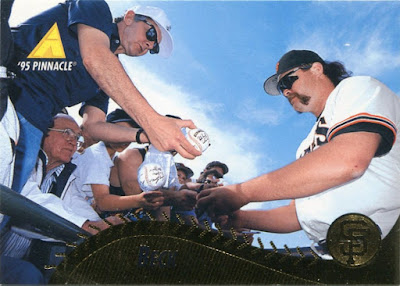 3) He sported perhaps the finest and most intimidating mustache of anyone in baseball history not named Al Hrabosky.

I'm almost positive that he was at least part of the inspiration behind Kenny Powers. 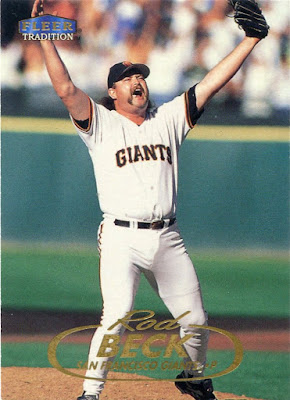 4) He had confidence and charisma on the mound in an era where players were more and more focused on keeping their "game faces" straight.

Personally, I tend to gravitate towards pitchers with personality, and Rod Beck certainly had that. 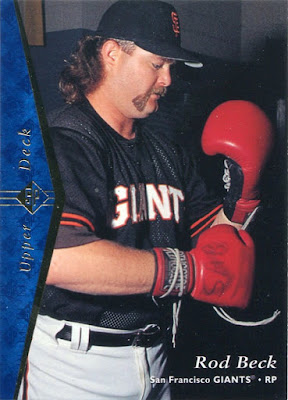 5) He had some of the best baseball cards around.

A couple of his cards (including this one) were currently residing in my frankenset binder, and a healthy stack of others just missed the cut. Because I make it a mission to simply chase "cool" cards, I think I had ten cards of the guy before I even decided to start collecting him. Not bad.

And, if I can ever get my hands on a little extra cash, I loaded about 50 more into my Just Commons cart a few days ago. 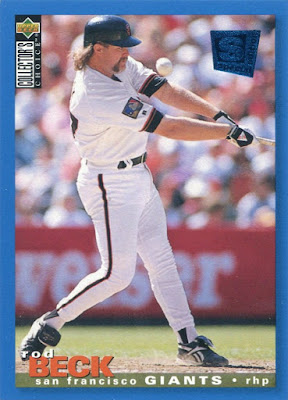 5a) There seem to be an inordinate amount of cards that feature him hitting.

Rod Beck was a career reliever. Every single one of his 704 career games were in relief, which meant that he didn't often get a chance to step up to the plate. In 13 big league seasons, he had a grand total of 20 plate appearances, going 4-for-19 (.211 BA) with an RBI.

Yet, for some reasons, quite a few card companies chose to produce shots of him at the dish. I think I already own about three or four. That's rare for any pitcher, much less a reliever.

Sadly, Beck passed away on June 23rd, 2007, at the young, young age of 38. He was buried in his Cubs uniform, which might well be the ultimate reason to collect the guy. Or any baseball player, for that matter.

So, after all that, all I can say is welcome to my binders, Shooter.

It's been a long time coming, and I apologize for the wait.
Posted by Nick at 6:28 PM

Welcome to the fantastic world of being a Rod Beck collector!.. "rodbeck-lectors" as we call ourselves.

When your readers inundate you with Rod Beck cards, keep me in mind as a place to dump your less-common dupes. :)

If I had to go on your word alone Rod Beck and Kirt Manwaring probably makes up the best battery combo in baseball card history.

That pitcher at the plate had me laughing out loud. The ball is whizzing past his face!

I'm also a "rodbeck-lector" and it's fantastic. Oh boy, did he ever have personality! He actually lived in a van down by the river: http://articles.chicagotribune.com/2003-05-19/sports/0305190167_1_winnebago-autograph-triple-a-iowa-cubs

That SP with the boxing gloves is so cool.