It's not Christmas without Secret Santa 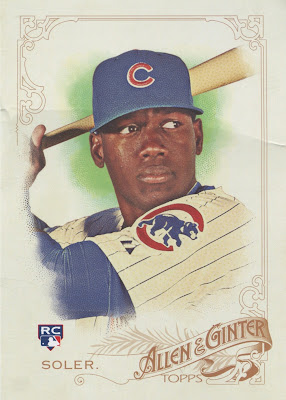 Another Christmas come and gone.

My holiday was a success for the sheer fact that, unlike the past two years, I actually had the day off work. And while the week preceding was kinda hectic, I suppose the holiday spirit first hit me when I received my Secret Santa package in the mail a few days before Christmas from none other than Bert of "Swing and A Pop-Up" fame.

It was a pleasure putting my own Secret Santa package together, but there was a great deal of anticipation on my part of wondering who drew my name in the festivities this year. I was overjoyed to learn that Bert -- a past trade partner of mine and a reader of the blog -- was the one tasked with cobbling together my gift.

The USPS seemed a bit overly enthusiastic to get this oversized Jorge Soler box loader to me, as evidenced by the small crease running through the card, but no matter -- I'm thrilled to have a new display piece for my Cubs binder either way.

Another oversized goodie, this time in the form of a Heritage box-topper with none other than World Series hero Addison Russell front and center. 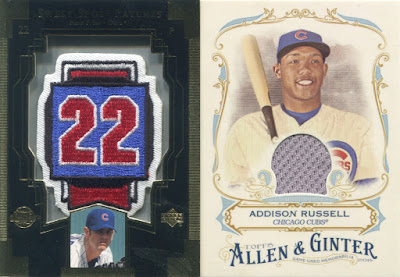 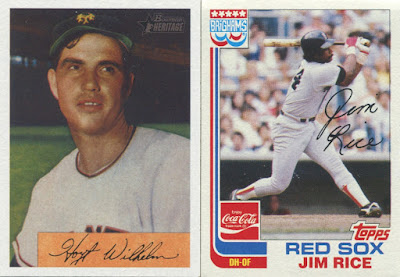 But Bert didn't just stick to the hometown team.

The Rice marks my first card from the Brigham's brand, and the Hoyt reprint is new to me despite the fact that his real '54 Bowman was one of the first cards I added to my Hoyt collection about a decade ago. 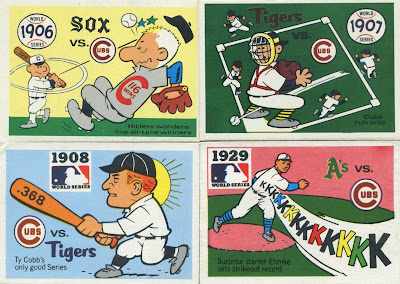 These were perhaps the biggest hit of Bert's Secret Santa gift.

I absolutely LOVE these Laughlin World Series cartoons, and I've had a lot of trouble tracking them down at card shows and such. Bert sent an entire quartet my way, three of which involve century-old Cubs Fall Classics (including two victories).

Such generosity, in fact, inspired to throw a few more of these gems into my COMC cart just hours later. 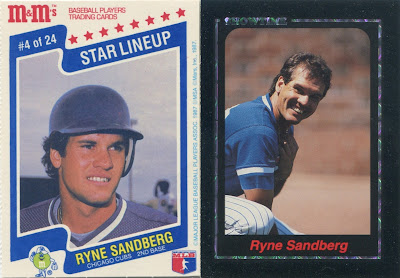 Bert kept the oddball train running with this excellent pair of Rynos. 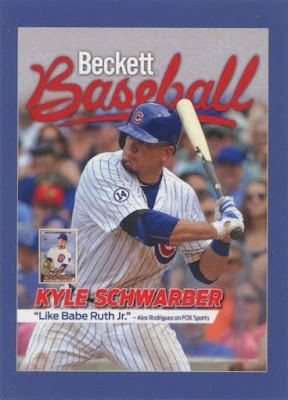 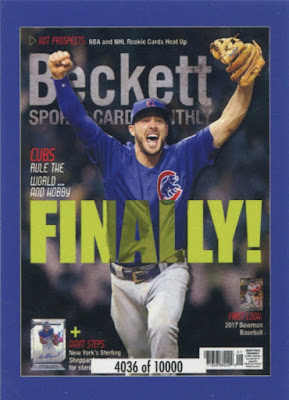 The Secret Santa cornucopia came to an end with this Beckett-issued modern oddball of a couple hometown stars.

I'm still trying to decide which side should be displayed front-first in my binders (Schwarber gets the nod for now), but either way this serves further evidence that magazine covers on baseball cards are never not awesome, and a terrific cap on what was a superb Secret Santa gift from Bert.

I've experienced two-and-a-half decades' worth of Christmases at this point, and it's a holiday already jam-packed with tradition. But over the last couple years, another one has joyously sprouted up with the Secret Santa festivities around the blogs.

Whether giving or receiving, it just isn't Christmas without Secret Santa.
Posted by Nick at 6:20 PM

That was a really great package! The Laughlin's are especially cool.

Nice SS package. Love the 70s Laughlin cards. I have the full 1970 set. I've got to buckle down and at least attempt to be active on the '71 build. I am old enough to remember getting packs of them when they were NEW. The gum that came with them was awful then. The gum was very powdery, and I think it was sugarless. Not sure about the sugarless bit.

Been a fan of those Laughlin World Series cartoons ever since I first saw them on the backs of Fleer stickers in the early 80's. Great package Nick!

Glad you enjoyed them...I just wish I could have sent you more!