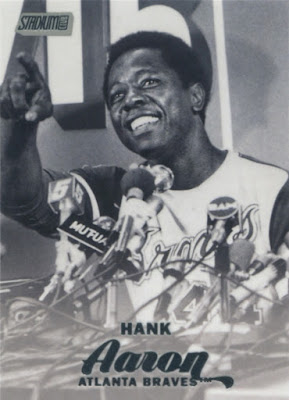 Here's a question I often ask myself: who was the focus of my very first player collection?

Who pushed me down the hallowed path I've walked my entire adult life, now surrounded, all these years later, by literally hundreds of different player collections? This question will, sadly, always remain an uncertainty, as my card-related memories don't go back that far.

But I have some guesses. Hank Aaron is one of the strongest candidates -- it certainly seems like I've been collecting him for something close to a lifetime. Aside from the obvious fact that he's one of the game's most likable figures, there's another good reason to collect the guy: he simply has some darn fine cards. Every single one feels like a treasure.

All this makes culling together a Top Five list of Hank Aaron a tall order, but here today is the very best of my Hammerin' Hank collection. 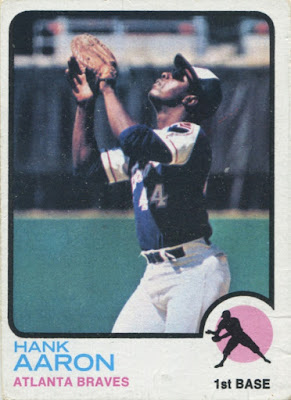 My memory is (again) fuzzy on the early days of my Hank Aaron collection, but I know this was one of the first BIG cards of his I owned.

Looking at it now, it's not really a great representation of the guy's remarkable career. He's no longer listed as the Gold Glove rightfielder of his prime -- he made the inevitable migration to first base as the years wore on. Also, Hank's shown in the field tracking a weak fly ball, rather than at the plate slugging one of his record-breaking homers.

But all this is objective -- subjectively, this will always remain a special card to me for the sheer fact that it was one of the catalysts for my current Hank Aaron collection. 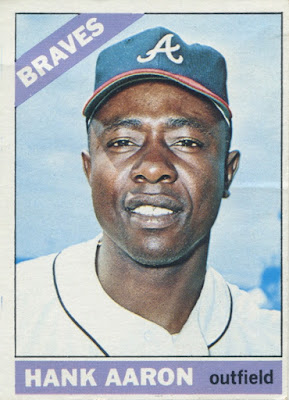 I feel a little bad for this card.

It's obviously a behemoth in my collection, my oldest Topps issue of Hammerin' Hank and a high(ish) hero number, to boot. One of Aaron's finest cards, and one I'm darn proud to own.

But it kinda got overshadowed by the Mickey Mantle I found in the same box at a very special garage sale a few years ago. 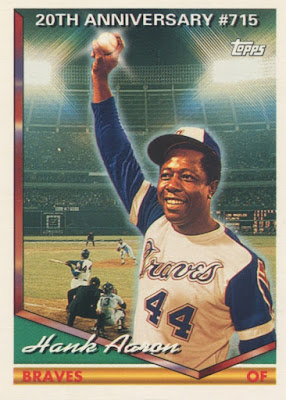 Hank Aaron has a ton of great modern cards, but this is far and away the best one.

Commemorating what was at the time the 20th anniversary of Aaron's historic 715th homer, this masterpiece features the very moment he became baseball's all time Home Run King -- a clip I've probably seen more times than any other single highlight in my life. 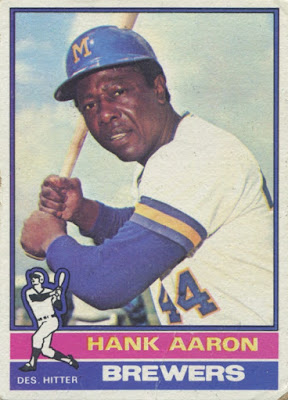 If I had to bet, I'd wager that this was the first Hank Aaron card I ever owned -- or, at the very least, the first vintage one.

What I do remember is that my dad got me this as a Christmas gift back when I was in grade school, and it's been one of the cornerstones of my collection ever since. Again, like the '73 issue, it's not the greatest representation of Aaron's hallowed career -- he looks old and withered on this, his final card, and what the heck is he doing on the BREWERS?

Knocking this one up a few notches in this countdown is the fact that it almost singlehandedly shaped my current and never-fading adoration for sunset cards. 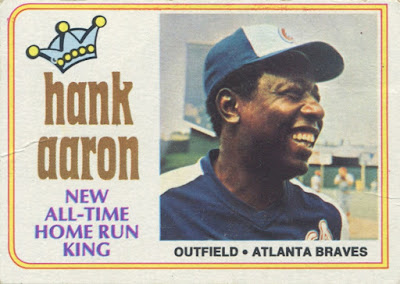 There's a chance that if I wrote this post tomorrow or next week or a year from now I'd have a whole different card at #1 in this countdown.

But as of this very moment, I (appropriately) give #1 honors to Aaron's hallowed Card #1 in the 1974 Topps checklist, which features a bold declaration of Hank as baseball's New All-Time Home Run King...even though he hadn't quite broken the record yet at that point.

Granted, the event was all but certain when this card was released -- Aaron was sitting at 713 career homers when the '73 season ended, two shy of passing Babe Ruth -- but, still. What if he broke a knee in Spring Training? What if he fell ill? What if he was maimed in a bizarre gardening accident?

Luckily, none of that happened: the card crowning Hank Aaron as baseball's Home Run King reigns supreme as the king of this countdown.
Posted by Nick at 4:29 PM

Now you have me wondering who my first player collection was. I know Rickey Henderson was one of my first favorite players... but back then I collected as many cards as I could for any baseball player... especially the Oakland A's. I'm thinking Tony Gwynn was the first guy I actively started seeking specific cards of. But who knows. It was a long time ago.

Great selection of Aarons. The 1974 Topps is an iconic card and the 1994 Topps is an affordable treasure. I think his 1956 Topps, 1963 Topps (NL HR Leaders w/Mays, Robinson, Cepeda, and Banks), and 1964 Topps Giants would be three of my favorite Aaron cards. It's not likely... but I'd love to add his 1954 Topps rookie to the collection one day too. It's a shame he didn't have any early 70's Kellogg's cards.