When the cards collect you 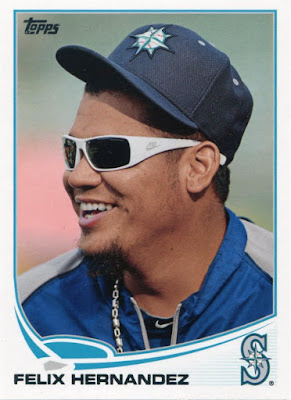 Whenever I say I collect this or I collect that, I have to remind myself that the cards are the ones with the power in this relationship.

Normal logic would dictate that I'd decide to start collecting something, and then chase the cards. It's often the other way around, though. I'll be flipping through my cardboard and think Hmm, I have a lot of [insert player, mini-collection theme, etc.]. Maybe I should start collecting that.

Felix Hernandez is a great example of this. He's one of those guys that seems to fall out of every other pack I open, an odd phenomena that I'm sure most collectors have experienced with various players.

Even trading isn't safe, because Oscar of the awesome blog "All Trade Bait, All the Time" dropped this shades-tastic Topps photo-variation SP of King Felix on me in a recent trade package.

I haven't officially decided to collect Hernandez yet, but I don't think I'll have a choice if the guy keeps stalking me like this. In the past, I've given thought to starting a position-based collection.

That is, I'd set out to hoard a copy of every single card of guys pictured playing a certain position in the field. If I did, I'd probably chase catchers, because they have the best fielding shots in the biz. (Sometimes they even feature cameos, like the Kid K appearance on that Barajas.)

Granted, I doubt I'd ever do such a thing, though you never know with my crazy mind. 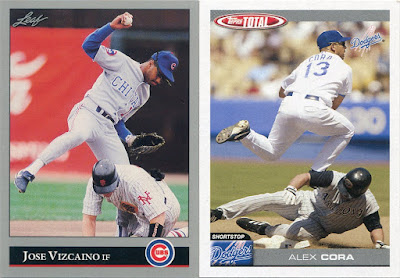 Oscar added a couple inductees to my double dip collection with these two (and even a semi-throwback shot with the Vizcaino).

This collection was inspired by a few other bloggers who chase double plays (notably GCRL), and partly by the fact that I simply noticed I already had a lot of turning two shots in my collection one day.

The decision to consciously collect them was the last step in a long process. 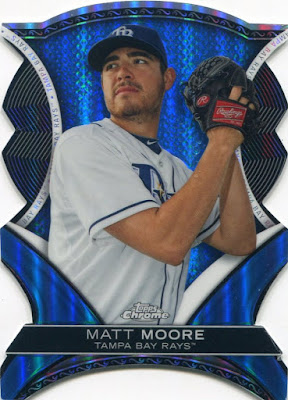 Yes, I do indeed collect any and all oddly-shaped cards.

I do this because...well, how could I not? 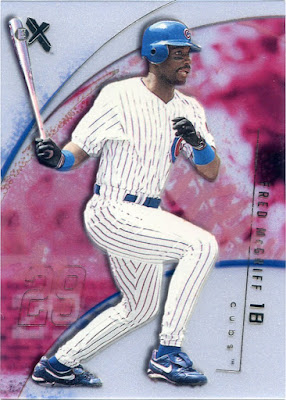 I received a second package in the mail on the same day that Oscar's arrived.

This one came from Jeff of the terrific new blog "Wish They Came with Bubble Gum," and it was the first swap between he and I.

Jeff sent a lot of Cubbies my way, including this spiffy acetate-ish Fred McGriff single. 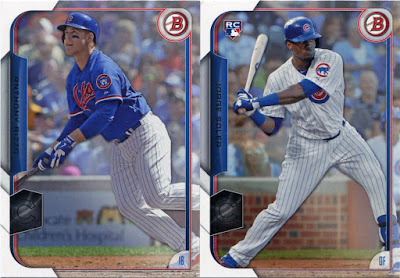 Lots of people drop Cubs on me even though I'm really not a team collector.

But I'd be lying if the amount I receive didn't get me halfway considering it. I don't think I'll be ready to take the team collecting plunge anytime soon, but, in the meantime, I do indeed chase cards of a lot of different Cubbies. These two were the first (and, to date, only) 2015 Bowmans in my binders.

I'm especially fond of the Rizzo because the jersey he's wearing throws it way, way back...to the late 1990s. 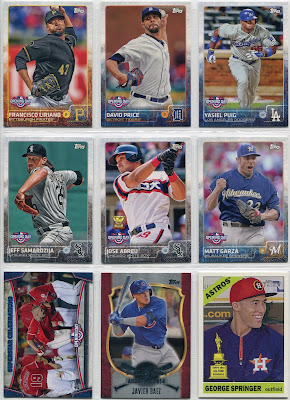 Jeff threw a stack of my 2015 needs into the mix as well.

I enjoy receiving these quite a bit because it saves me the time, energy, and money of having to buy packs and/or hunt them down at card shows.

I guess that's why I actually put a decent amount of effort into updating my want lists. 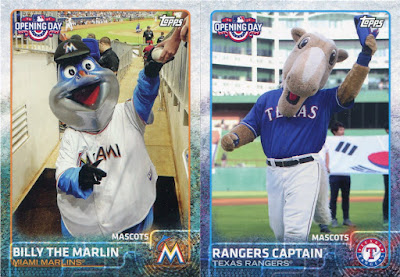 But my want lists aren't perfect.

Neither Billy the Marlin, the Rangers Captain... 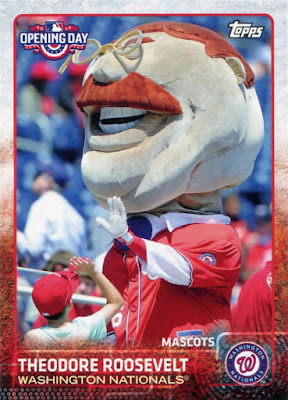 ...or Teddy Roosevelt were part of my 2015 Opening Day needs.

Still, Jeff decided to send them anyways because all three are actually mini-collection hits. Billy the Marlin is signing autographs, the Rangers Captain is tipping his cap, and, as part of my "cards with kids" theme, Teddy is high-fiving a young fan about a third of the size of that giant head.

Cards like these make me all the more glad I mini-collect, even if the decision to ultimately collect them wasn't really in my power.

In a lot of ways, my collection is smarter than I am. It leads me to the fun in this hobby, rather than the other way around.

Don't be afraid to let the cards collect you.
Posted by Nick at 3:20 PM

Cards used to own me. But then I decided narrow my collection/collecting habits. Nowadays a large majority of cards I get end up being cards I NEED or am just going to ship off to another collector.

Speaking of which your line about those two being your first Bowmans fem 2015 reminded me that I should send out that package I've prepared for you. Hopefully it'll be quite the Zapping.

Hi Nick
I just saw this on my Facebook feed- an article about throwback jerseys. 25 years ago today is the first throwback game- White Sox.
Enjoy
http://espn.go.com/mlb/story/_/id/13232562/uni-watch-best-throwback-uniform-mlb-team?ex_cid=espnFB

Man... I wish you weren't right. Over the past few years, I've slowly tried to regain control and decide my own cardboard destiny.

That's how I started what are now 50+ player collections from the 60's and 70's. Whenever I came across three or four cards I had of the same player, I considered him for player collecting. I only had singles from a few sets at that time. Now I have eight four-inch binders with all of them inside...