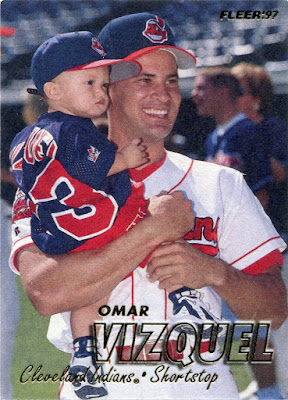 About 99 percent of the "keeper" cards I own are currently housed in binders.

I have a small collection of non-sports cards in snap cases on my night stand, and a few other snap cases of miscellaneous cards (multi-player, multi-team, etc.) on a shelf. My oversized cards are scattered around in various locales, and a handful of my best vintage cards are on "The Wall," as I like to call it.

Pretty much everything else goes in the binders. Or so I thought. A recent package from John of the terrific blog "Johnny's Trading Spot" put a little wedge in that plan, but more on that in a bit.

As many of you probably know, John always puts together monster trade packages, and this one came in the form of a flat-rate box that produced quite a few binder hits for my mini-collections.

This shot of big Vizquel and little Vizquel was a fantastic never-before-seen addition to my "cards with kids" theme. 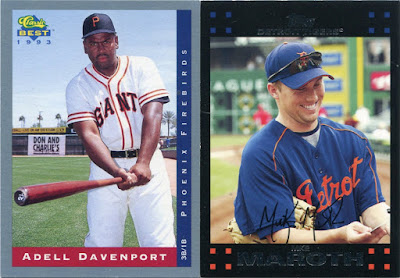 These go into the "bat barrel" and "autographers" archives.

Like I do any time I receive an interesting minor league card, I checked to see of Adell Davenport ever made it to the big leagues. Sadly, no. 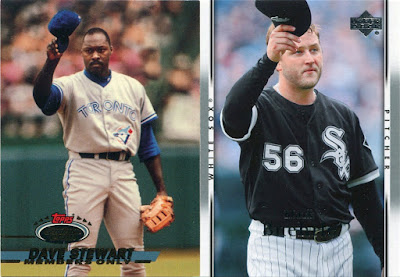 A couple tips of the cap from a couple top-notch hurlers here.

This is one of my newest mini-collections, and it's quickly become one of my favorites to build. 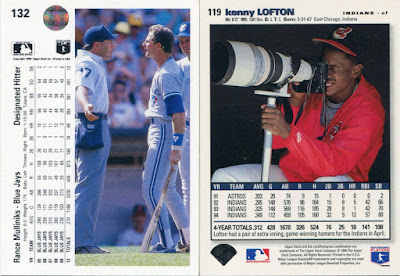 John even pored over the flip-sides for a few more themed hits.

I'd actually had the Lofton in my binders for a while now, but I never noticed the "behind the camera" shot on the back of it.

And I'm severely disappointed in Upper Deck for not featuring a pissed-off Rance Mulliniks on the front of that card. 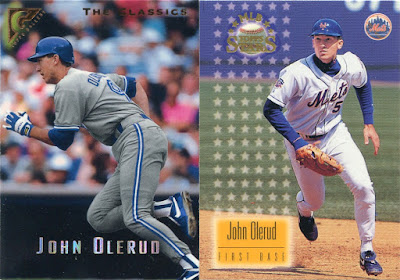 John always manages to find new cards of the most prominent John in my collection, John Olerud.

Much of Olerud's career took place in the mid-to-late 1990s, which means that he was featured in almost all of the gluttony of brands/sets that were released during that time period.

He probably has thousands of cards I'll never track down, but at least there's always something to chase. 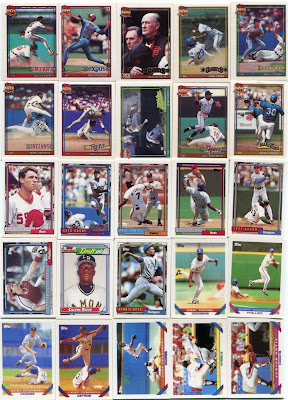 Either I have a really big scanner, or these are really small cards. The latter is correct, of course, and this is why I brought up the topic of my binders earlier. These, if you don't know, are part of the Topps Micro brand that was released for a few years in the early '90s.

I'm not exactly sure how these were originally packaged or how one obtained them, but I do know that these are probably the smallest baseball cards known to man. A good twenty-five of them (out of about three-dozen that John sent) fit into this scan alone. Most are bite-sized mini-collection hits.

I dropped them about three times as I walked over to the scanner, which made me feel like I was playing 52-card pickup all over again. 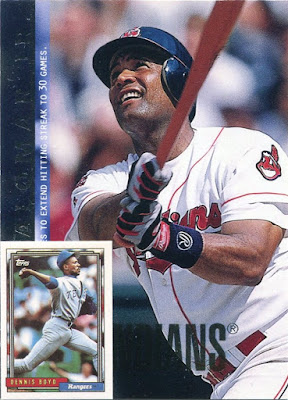 For scale, here's a Topps Micro "Oil Can" Boyd in comparison to another standard-sized card that John sent.

I have many types of minis in my binders. A&G, Gypsy Queen, Topps Mini, etc., etc. They don't exactly look fantastic in nine-pocket pages (though I don't seem to mind it as much as other collectors), and they have a tendency to shift around quite a bit. (Yes, I know they make mini-style pages, but I don't own any and they wouldn't fit with my filing system.)

Topps Micro represents a bit of a dilemma for me, because these things are a heck of a lot smaller than your standard minis. In the end, I decided that these would be the rare cards that I store outside of my binders. They'd probably slide straight out of a nine-pocket page.

For now, I can say Topps Micro is definitely a fitting name for these minuscule pieces of cardboard.

Hopefully you didn't need a magnifying glass to read this post.
Posted by Nick at 6:16 PM

Those micro cards are nearly impossible to display -- maybe in sleeves made for stamps or something?

I just end up storing those micros with minis found in A&G and GQ along with old oddballs like stamps into a relatively old box of 2013 Bowman Chrome mini.

I had the entire '92 micro set. I bought it from Kmart, I believe. They were packaged like your typical complete-set boxes.

I got rid of it in a garage sale. Waaaaaay too much hassle.

I keep the micros in the set form (have 91, 92 done, working on 93), as for the others they slide into and stay put in the 9 pocket pages along with a copy of the standard base card, and if I have them the cracker Jack mini and the gold micro. I'll put a post up one day showing them together. BTW, a huge heads up. Putting a mega package together for you, and several other bloggers too.

They're tiny, but normal cards feel freakishly huge after you've handled them for a while.

They're a huge pain in the butt to store (unless you're like me and you kept the factory boxes)... but they're super cool. Love these micro cards. The Chipper and Jeter rookies are what motivated me to track down the 1991 and 1993 sets. I ended up buying the 1992 set to round out the trifecta.

I picked up a complete set of '91 Topps Micro from D&A a few years back out of pure curiosity. It's less a longbox full of cards and more a stick. You could play pool with it.