Live from the Queen City 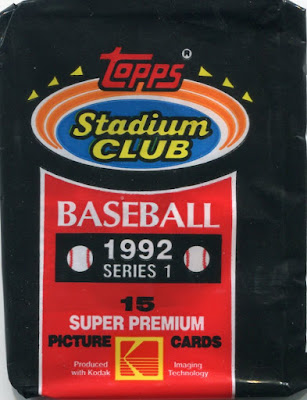 I'm still trying to get my head around the fact that the All-Star Game is next week.

Didn't the season just start a couple days ago? Ah, how time flies. Whether I'm ready for it or not, this year's Midsummer Classic (and all its various festivities) will be live from Great American Ballpark in Cincinnati. It's one of the nicer parks in the bigs, so I'll definitely be looking forward to it.

As luck would have it, my dad spent a weekend in the Queen City not long ago. He's a big record collector (as I've mentioned before), and went down to Cincinnati to hit some record shops with a few of his fellow vinyl enthusiasts.

So imagine my surprise when I received from my dad saying that he'd found a card shop. I've spent the last dozen years of my life looking for a decent LCS around where I live. My dad heads to Cincinnati for one weekend and finds one.

From what my dad said, this particular store was mostly comic books with a dash of baseball cards added in. One of the main cardboard attractions, so I'm told, was a stash of dollar packs.

Knowing my love of the brand, my dad started off by throwing a couple 1992 Stadium Club packs into his cart. 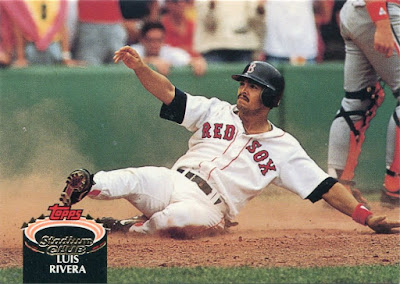 Stadium Club always prided itself on photography over design, and '92 might be the strongest example of that.

I'm not even sure that this is a design, so to speak. Five percent nameplate, 95 percent photo. Not every brand could pull off such a thing, but Stadium Club did. 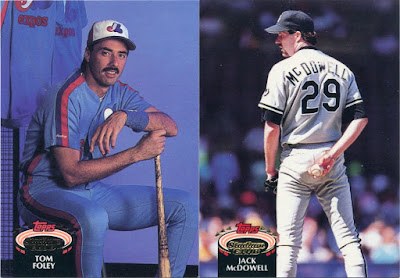 What sometimes gets lost in the shuffle is that Stadium Club could do posed shots as good as anyone.

I'm obviously a huge fan of the action photos (that McDowell is one of the better '92s I've seen), but poses like the Tom Foley are just as memorable.

I don't know if a bluer (is that a word?) baseball card exists. 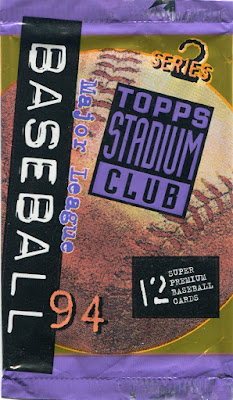 Dad stepped forward a couple of years and picked up four packs of 1994 Stadium Club off the dollar shelves.

I've seen a fair amount of '92 SC in my collecting lifetime, and I'd opened some packs of the stuff before my dad's trip to Cincinnati. I can't say the same about 1994 Stadium Club. I've never busted a pack of it, and I rarely see singles from the set lying around. I'm not sure why that is.

Before this, I'd always considered '94 SC to be middle-to-bottom of the pack as far as the brand is concerned. Granted, even a subpar Stadium Club set is still better than about 98 percent of anything else ever released, but you get my point.

These packs made painfully obvious what I'd been missing out on with 1994 Stadium Club. 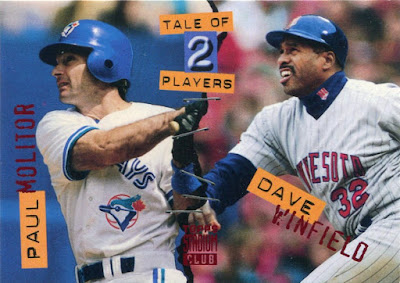 Both Paul Molitor and Dave Winfield were still enjoying success in the bigs in 1994, and this split-screen insert does a terrific job of honoring both greats.

I'll admit that, for a split-second, my brain thought this card was actually stapled together.

I guess that's a testament to how well-designed it is. 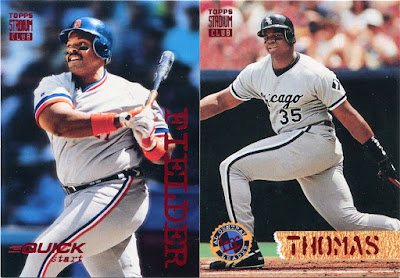 Stadium Club was never known for its inserts, but these were still a treat to pull.

It was especially satisfying to pull a card of the Big Hurt from his prime. 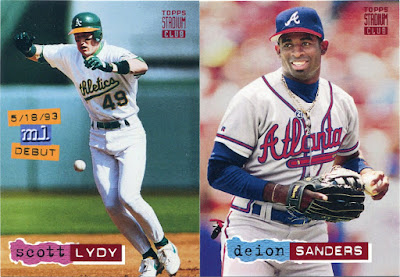 Of course, Stadium Club is all about the base cards, and these four packs went a long ways in showing me just how top-notch they were in 1994.

I can't say I've ever heard of Scott Lydy (although that's an awesome last name), but I do know that I don't own many cards of baserunners avoiding a sizzling ground ball.

Also, note the substantial amount of #21-themed bling on Neon Deion there. 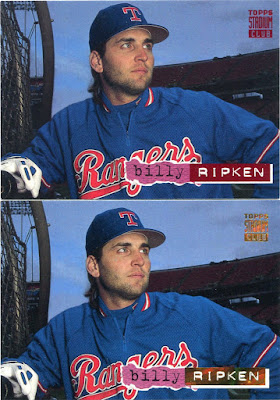 I don't own many cards of Billy Ripken as a Ranger, so these were excellent finds.

I pulled the base version out of the second pack, and the Golden Rainbow parallel (as noted by the golden SC logo/nameplate) fell out of the third.

Call it an added bonus. 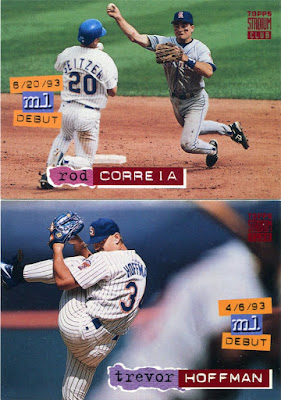 As I found, the horizontals from '94 Stadium Club are absolutely elegant.

Here we have a double dip masterpiece that I'd never seen before, and an outstanding shot on what has to be one of Trevor Hoffman's first cards as a Padre.

And just when you think Stadium Club can't possibly get any better... 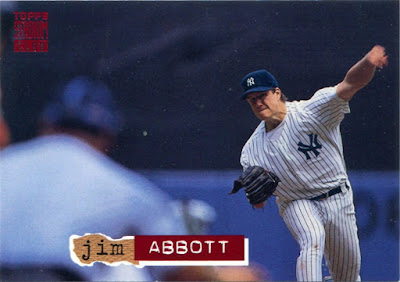 ...a card like this falls out of the very last pack.

My fandom of Jim Abbott has been well established, and I was astounded that I'd never seen (much less owned) this beauty before. Goodness.

With gems like these, I may have to take a trip down to Cincinnati and buy up the rest of that store's stock of '94 Stadium Club. 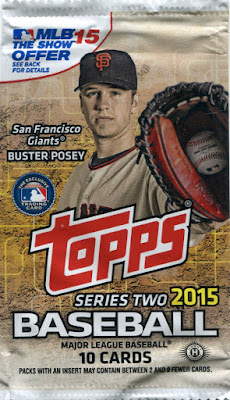 Dad went the more contemporary route by adding a couple packs of 2015 Topps Series 2 to the mix.

I'm more or less waiting until the National comes around to (hopefully) pick up my base needs from this set (and other recent releases, for that matter), but I can never turn down the fulfilling feeling of busting open some packs of baseball cards. Can anyone?

I'll also note that, because of the LCS drought around my house, these were the first Hobby packs I'd opened in a long, long time. 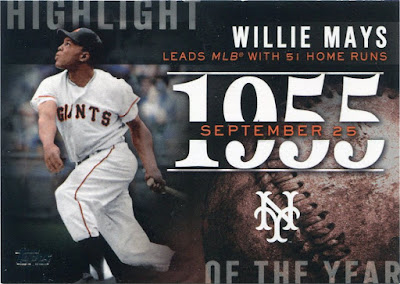 Hobby wax is more for the hit-focused collectors, and I'm fairly apathetic towards such things.

If you define a "hit" as a game-used or autograph card, then, no, I didn't pull any of those.

But, either way, an insert of Willie Mays is a hit in my book. 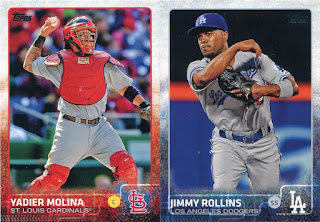 These, unfortunately, were the only two base cards I needed from the pair of packs.

But, if you've gotten to know my dad at all from the past posts I've written, you know the above-and-beyond type of person he is. 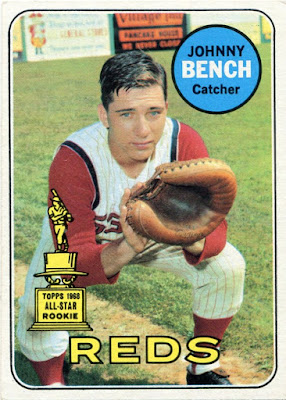 And you better believe this is an above-and-beyond baseball card.

My dad texted me a picture of this one while he was in Cincinnati, asking if I needed it. I said, in so many words, OH MY GOD OF COURSE I NEED IT because a big part of me has always wanted to own a 1969 Topps Johnny Bench.

There's so much to love about it. It's Bench's first solo card (after his multi-player '68 rookie), for one thing. And he looks about 12 in that shot. And he's wearing what looks to be #55. And Rookie Cup. And those old '60s vest-like Reds jerseys. And outfield wall ads. AND JOHNNY BENCH!

This card is in awfully fine shape, and is definitely one of the better-conditioned vintage cards I own. The card shop owner had it priced at $25, but my dad said he managed to get it down to ten bucks, which is a terrific deal for such a beautiful piece like this.

I guess the ability to haggle is one thing that wasn't passed down from my father's side. Had that been me, I would've lamented the $25 price tag and sulked out of the store without even trying to make an offer. Thank goodness my dad was the one who found it.

So, in an odd way, my baseball card collection actually benefited from a weekend's worth of record shopping by my dad in Cincinnati, right on the heels of the All-Star Game.

Great stuff Nick! Congrats on the Bench, it's incredible.

That Bench is awesome. Unless there's a crease that doesn't show on the scan or the back is messed up, $25 was a great price, and $10 an absolute steal. Been looking for one myself and would be proud to own that one. Congrats!

Nothing like picking vinyl and wax on the same trip. Great Bench card and ripping $1 packs are fun anytime.

hot damn a ten for the Bench is fantastic! congrats!

I really like that Hoffman TSC card. I guess the Bench is okay too.

I have tons of '94 Stadium Club to trade. If you're interested let me know.