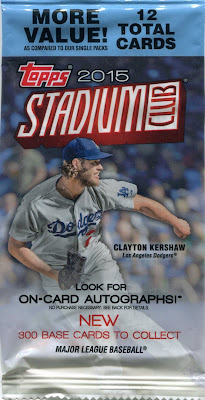 Since I hadn't gotten my full card fix after Sunday's flea market run, I was left looking for other ways to satisfy my cardboard needs.

Luckily, there just so happens to be a Target next to where the local flea market is located, so I took a short stroll over there. My hopes were to land packs of the two newest brands on the market, Stadium Club and Series 2.

I'd been salivating over all the Stadium Club/Series 2 posts (but mostly Stadium Club) I read last week, but fought the urge to go the retail route because I'd been saving what little money I had for the flea market. With my flea market trip coming in at well under budget, I decided the time for retail was now.

The Target was fully stocked with both Stadium Club and Series 2, and I picked up a rack pack of each.

And, since I don't have any better ideas for how to show off my pulls, I thought I'd feature my five favorite cards from each pack. 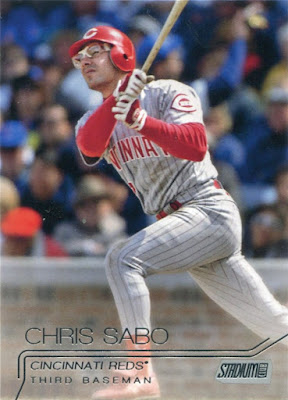 From what I've seen, it might be better than last year's edition, a feat that I didn't think was humanly possible.

The price point is pretty steep, as this skimpy 12-card rack pack set me back a whole six dollars. I'd scoff at such a price with most other sets, but 50 cents a card is almost worth it with Stadium Club. That said, I doubt I'll be buying anymore retail packs and cross my fingers that someone has an SC dime box out at the National.

We'll get to the photography soon enough, but one thing I like about this year's Stadium Club is the inclusion of second and third-tier stars like Chris Sabo. (Goggles!)

Pulling your 123rd card of Cal Ripken gets boring after a while. 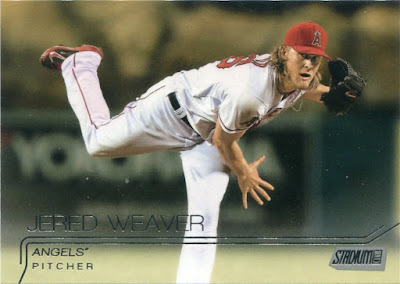 If this were Flagship, all we'd get here would be an extreme close-up on Jered Weaver's gaping mouth.

For Stadium Club, we're treated to the full photo, background and all. 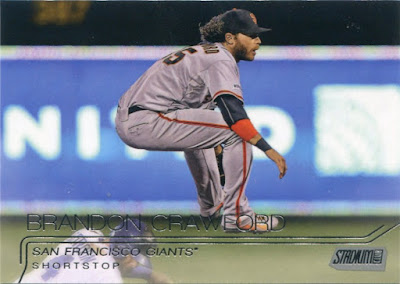 Especially when they're of the horizontal variety. 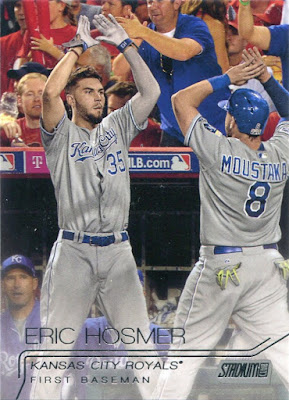 It also helps prove my theory that cards with fans in the photo are the best kind of cards. 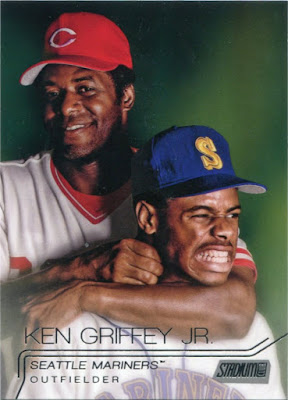 Even the best sets seem to only have about two -- maybe three -- cards I'd classify as drool-worthy.

Reading all your posts over the past week has shown me that Stadium Club has dozens of them. The other four I just featured are indeed nice, but this was the only drool-worthy pull from my rack pack. The Griffeys have made appearances together on a lot of other cards, but this is easily the best one.

It's not even close, really. 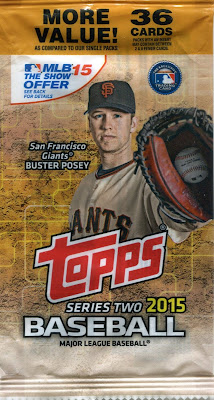 Despite what Stadium Club wrappers might tell you, 12 cards for six dollars isn't "value."

If you want true value, give Series 2 a shot. You'll get 36 cards for a mere five bucks. It might not have the flash and pizzazz of Stadium Club, but it'll give you a fix when you need one.

I've always felt a little sorry for Series 2. It doesn't have the season-opening grandeur of Series 1, nor does it have the playoff-crazed flair of Update. It's just kind of there.

And, to make matters worse, the 2015 edition came out days before Stadium Club hit the shelves, which meant that Series 2 was buried even further down into the rubble this year. Not to worry, Series 2. 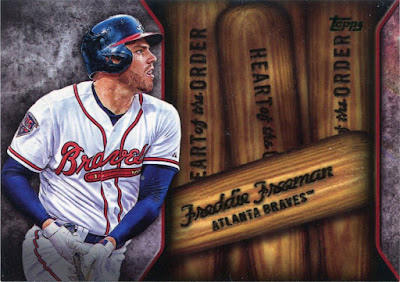 Not the best insert design ever created (though Topps has done far worse), but I won't turn down an insert for my new Freddie Freeman collection.

(And I'll admit that I chuckled at the HOR prefix since I tend to say it as a whole word rather than individual letters.) 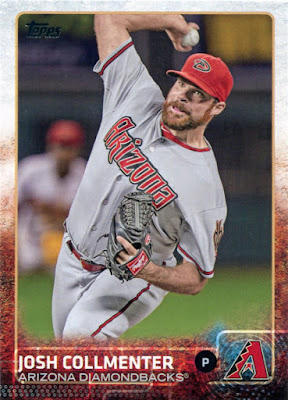 Josh Collmenter is one of my favorite under-the-radar ballplayers in today's game.

His unorthodox over-the-top delivery is featured perfectly on this card, and, as a natural sidearmer, it hurts my arm every time I so much as look at it. 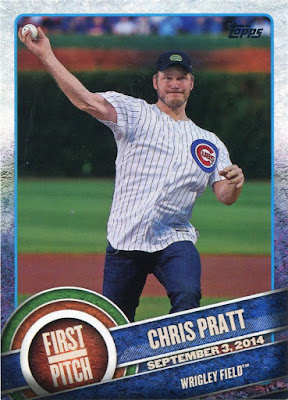 I was happy to see that Topps extended its popular "First Pitch" insert set into Series 2.

No one close to The Dude pops up in this second installment, but I did get a halfway decent celebrity with Mr. Pratt here. My trips to the cinema are few and far between these days, but, like seemingly everyone else in the entire world, I did indeed see Guardians of the Galaxy.

Honestly, I liked Pratt a lot better as Scott Hatteberg in Moneyball. 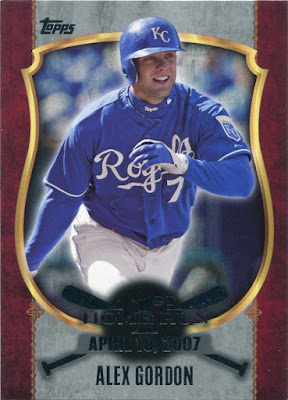 Oddly, what seems to be Topps's best insert series this year (perhaps aside from "First Pitch") is retail-only.

The "First Home Run" set is one of the few insert brands to made the crossover into Series 2, and I'm glad it did. The design is fairly generic, but I like the idea of honoring a guy's first dinger in the bigs. Better yet, Topps seems to have found shots from the games that said first homers actually occurred.

You hobby shop patrons are going to have to hit a big box store to get your hands on one of these. 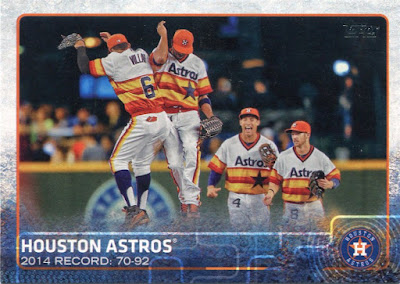 Remember what I was saying about drool-worthy cards?

Here's another one, and it added a much-needed spark to what was honestly a pretty dull rack pack. The Technicolor Astros jerseys might be the best throwbacks of all-time, and this is four of them on one card.

If your childhood was anything like mine, your mom might've warned you to not stare at the sun for too long.

The same applies to this card, kids.

Overall, I think Stadium Club probably won this Top Five battle, despite Series 2 having three times as many cards in its rack pack. At least now I can complain about not having opened any Stadium Club after everyone else seemed to get theirs. At least for a couple days, anyways.

I have a feeling that pack-busting itch is going to come back again soon.
Posted by Nick at 6:45 PM

That Astros card is pretty sweet, Collmenter started against Atlanta this year and I was uncomfortable watching him pitch. Ugh.

A Freeman collection huh? I may have some triples to send your way (my daughter has a FF5 PC as well)

Without looking into it more, I'm not sure the Hosmer is from the playoffs. I have a feeling it is a regular season game against the Cardinals. I could be wrong, but a lot of red in the seats, I guess it could have been the ALDS against the Angels.

That Brandon Crawford I'm almost positive is from the World Series though. There is a slight chance its from the Giants vs. Royals regular meeting last August.

Overall, it looks like you got some good cards. That Astros card is amazing.

Great cards. Between the amazing Topps base card design... and Stadium Club's stellar photography... Topps has really been killing it this year. Archives is awesome too. Well except for those stupid super short prints.

The Hosmer/Moustakas card is definitely from Game 1 of the 2014 ALDS vs the Angels. You can see the guy above Moose's hands wearing an Angels hat. Moose hit the go-ahead HR in the 11th inning. The red "Thundersticks" being held by the fan were the giveaway that night. I was about 8 rows up at the far end of that dugout.