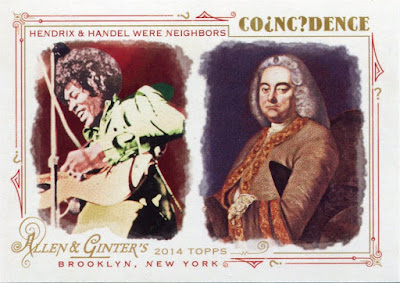 I was recently the grateful recipient of a big ol' box of cards from my buddy Alex of the terrific blog "Chavez Ravining."

As usual, the cardboard Alex sent was fantastic, and we'll get to it in a minute. But first, I'd like to address the fact that Alex, a collector around my age, recently decided to put collecting on the back burner. Though he did check in when 2015 Stadium Club hit the shelves, he's said that his blog will remain dormant for a while.

Most people are rightly concerned about the lack of kids in the hobby, but I'm just as worried (if not more so) about the small percentage of collectors my age these days. Now, I don't know if the college-age crowd was ever a particularly big demographic in the hobby, but it seems especially low now. There are a few reasons for this, I think.

I have friends who, like Alex, work a lot of hours and go to school. A couple of my buddies have multiple jobs and/or work 60+ hours a week. They don't have time for cards. On the flip side of things, a few of my other friends (like me, unfortunately) have trouble finding steady work. They don't have money for cards. I make do with what I can, which isn't much. (I probably average around $10-$15 a month on cards.)

I don't want this to sound like some manifesto on the state of the twenty-somethings in today's society, but, in the end, it's no coincidence that there aren't more people my age in the hobby. 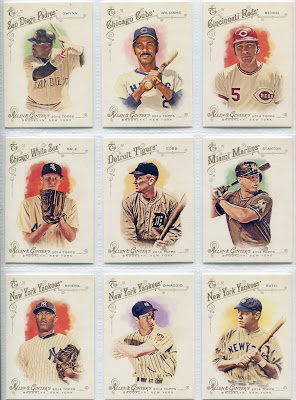 In the end, I guess I'm one of the survivors.

But, with any luck, people like Alex will keep a distant eye on the hobby and check in on the blogs every now and again. In the meantime, let's hope baseball cards still exist when Alex and I reach middle age, because I don't want to be reminiscing about the "good ol' days" when I could find cards at a Target a block away.

Here in the present day, however, Alex made it painfully obvious that he hadn't lost his touch for putting together killer boxes of cards.

This one knocked out a bunch of my 2014 A&G base and insert needs, and I especially love the Hendrix/Handel pairing. 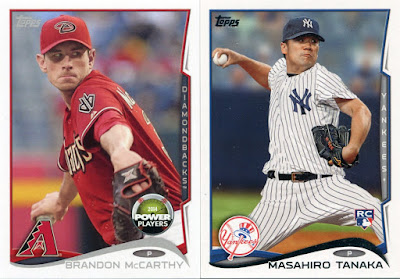 Next up were a couple 2014 Topps wants, and the Tanaka was actually the final base card I needed from 2014 Flagship.

The Tanaka hype was in full force this time last year, so I wasn't able to get my hands on a copy at the time.

Still, over 365 days later, I finally own his true Topps rookie card. 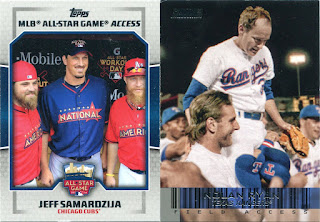 Alex really went to town with the 2014 inserts in this box.

The Samardizja commemorates what must've been an odd All-Star experience for the former Cubs hurler. If memory serves, he was traded to Oakland just a few days before the 2014 Midsummer Classic.

Though he was technically an AL'er at the time, he suited up for the National League (although he wasn't allowed to actually play in the game for the NL).

Wonder if we'll ever see something like that again? 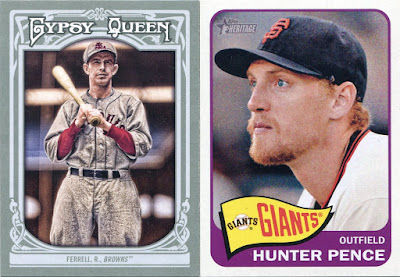 Alex made a right turn into the valley of short-prints about midway through this box.

It's an absolute joy to receive anything St. Louis Browns-related here in 2015. 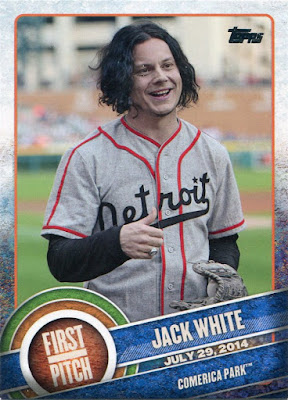 Back to the inserts, and, specifically, an insert I've been desperate to own since Series 1 hit the shelves.

I've always thought I should be more into the White Stripes than I actually am. Jack White seems like a cool dude either way, and I'm glad to own this baseball card of his.

Points for the throwback jersey, too. 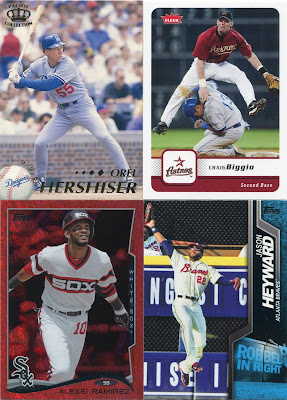 Alex went on to do some mini-collection hunting with this box.

There seem to be quite a few cards of Orel Hershiser at the plate, more so than most other pitchers in my collection.

The guy was a .201 career hitter, in case you were wondering. 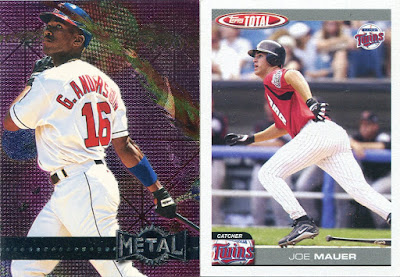 It wasn't all set needs and mini-collections, because Alex was sure to give the random machine a whirl as well.

That Garret Anderson reminds me...I need to pick up a cheap box of Metal Universe one day.

Now that would be a fun break. 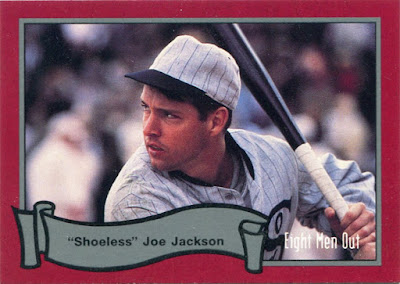 I've been planning to rewatch of Eight Men Out recently.

This card gives me all the more reason to do so. 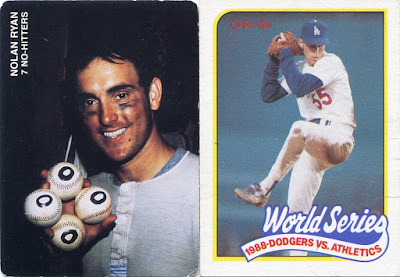 Alex didn't skimp with the oddballs, either.

The Ryan comes from a special Mother's Cookies subset, and the Bulldog is one of the rare OPC issues that isn't merely a Topps stunt double. So, did I enjoy these two oddballs? Oui, oui!

(Sorry, that's the only French I know.) 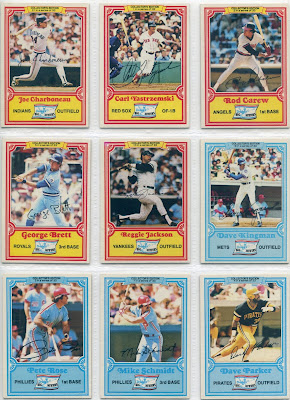 As far as oddballs go, Drake's stole the show.

At first, I thought Alex merely included a handful of these 1981 Drake's cards, but a little further investigation showed that he actually sent me the entire set.

I guess Alex doesn't give out bites. 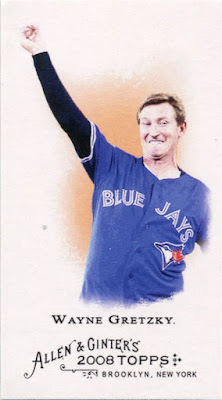 In what was definitely one of the most well-rounded trade packages I'd ever received, Alex capped off the fun with a budding stack of minis.

The Great One didn't appear in Topps's "First Pitch" insert series, but I'm glad to see that he cracked Ryan's custom set. 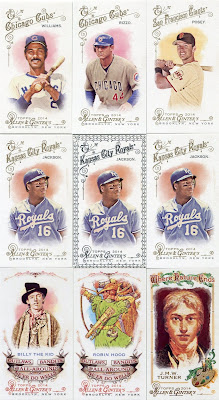 I don't buy many packs of A&G (who can afford it?), which means that about 98 percent of the Ginter minis I own have come from outside sources.

Alex certainly upped that number with this box. These were only a fraction of the ones he sent over, in fact. 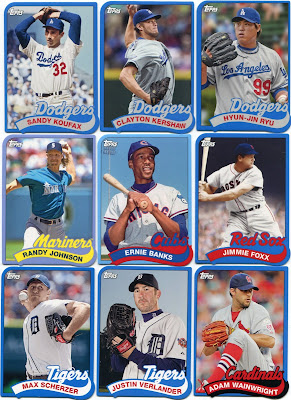 Are those enough minis for you?

Well, then bask in the glory of some '89 minis from Alex. 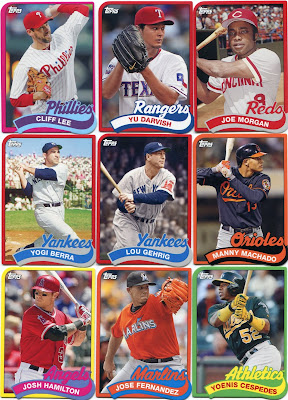 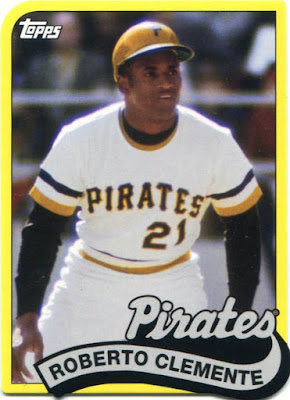 And how 'bout one more?

The '89 mini design didn't seem to go over very well last year, but I enjoyed it quite a bit. Alex just about doubled the amount of them I'd had in my collection prior to his generous stack of cardboard.

Like I said, Alex may be taking a sabbatical from the hobby, but he hasn't lost the ability to put together monster trade packages. Or boxes, in this case. So, Alex, if you're reading this, I thank you for this wonderful mix of cards, and I hope to see you around the blogs every now and again.

I do hope you return to the hobby one day, because we twenty-somethings will revolutionize the card industry when we're all millionaires at 35.

Glad you enjoyed one of the last batch of cards I sent out! While there may be a lack of twenty somethings in the blogosphere, I'm sure there are quite a few that read the blogs...especially yours. BTW, if my plans work out, I should have another post by the end of the month. Here's to hoping A&G prices on eBay aren't absurd next week! Thanks again, Nick!

Orel looks like some 12 year old with that stance.

I was lucky enough top pull that Tanaka RC out of a pack of straggling 2014 Topps a couple months back.He's not the talk of the town anymore but the card Is still one of my favorites.

I'm gonna be that guy and say "When I Was Your Age..." When I was your age, I was not collecting cards at all, maybe a rare pack here and there. I had neither time nor money to collect while I was in school, and after graduating it took a couple years to find a steady, well paying day job.
I think that's pretty common - collectors reduce or drop out completely once they hit college, then pick it back up when they have the time/money again.

i love the 89 minis too. awesome variety in this package. I would comment "when i was your age" but don't recall much about those years so long past.

Ahh... the cardboard sabbatical. I've thought about taking one of those a few times this year. Great cards. My favorite is the Roberto.