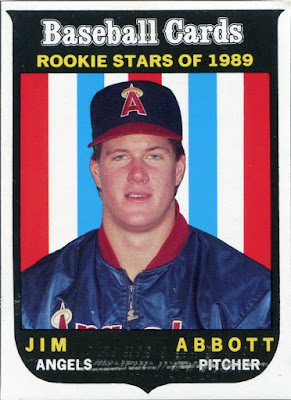 I feel like I say this every month now, but, once again, I get the feeling I'm neglecting my blog.

Like I did last year, I'm currently enrolled in my school's two-week creative writing crash course. It's a ton of fun, but, at the same time, it requires a lot of work. The class runs from 9 AM-3 PM five days a week, plus all the homework/other writing we do on our own time. (It ends this Friday.)

Such an investment of time and energy has meant that my baseball cards have basically sat untouched for the past couple weeks. I keep trying to tell myself that collecting and blogging go through highs and lows, but somehow the lows never feel right.

Despite my bouts with blogging apathy, I've still been receiving a steady stream of cardboard in the mail as of late. If this post is any indication, PWEs are continuing to be all the rage around here in the blogosphere.

Tony of the terrific blog "Off Hiatus Baseball Cards" recently put a bunch of these Heritage-before-Heritage Baseball Card Magazine oddballs up for grabs.

Part of me wanted to be that guy and claim all of them, but I managed to restrain myself by selecting Jim Abbott... 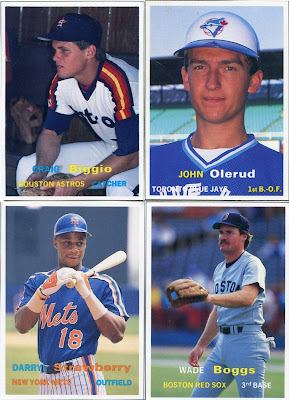 ...and the John Olerud you see here.

Tony, being the generous man he his, cranked things up a notch by tossing a bunch of other BCM freebies into the mix.

Screw Archives, just give me these. 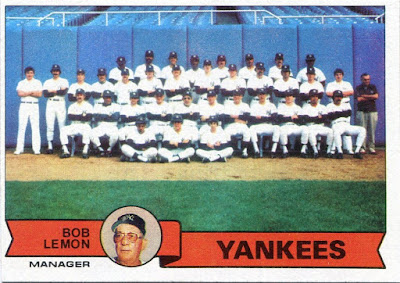 But when the famous Mark Hoyle offered to send me the entire... 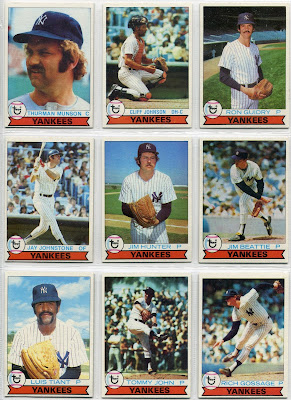 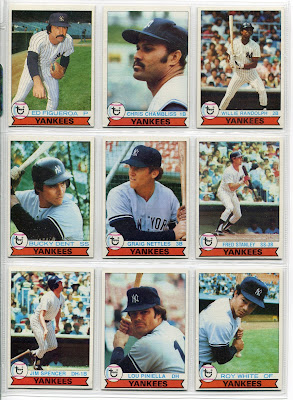 ...Burger King set, who was I to refuse?

From what I've read, Mark actually sent a few of these out to different bloggers, and I'm eternally glad I made his mailing list. I think the only '79 Burger King single I owned before this was the Lou Piniella. (In fact, I went a long time before realizing it was the Burger King card, not his standard '79 Topps issue.)

There are some big names here (Munson, Guidry, Reggie), but my favorites of the bunch are the Tiant and Tommy John because they were featured in different uniforms (Red Sox and Dodgers, respectively) in the standard '79 Topps checklist.

Yes, I'll have fries with that. 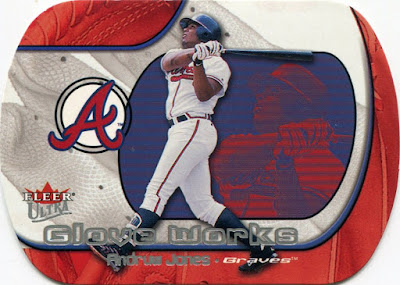 Another PWE came my way from reader Brian, also known as the guy who helped me find a decent LCS in the Chicago area.

He let me know that he'd found a garage sale that had 25/$1 cards on display. A few days after I surpassed my initial feelings of extreme jealousy, I found this envelope from Brian in my mailbox. I'm guessing some (if not all) of these cards came from said garage sale.

Even if I'm not exactly sure what they're supposed to be. 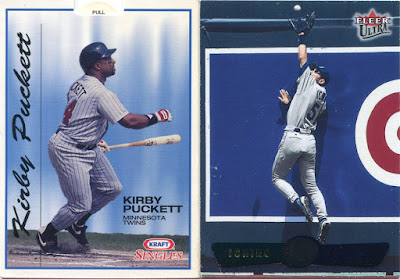 The Ichiro is both a newbie for one of my largest player collections and a coveted new mini-collection hit, while the Puckett is a wonderful new oddball for my binders.

One of these days I'll actually pull the pull tab on those Kraft singles. 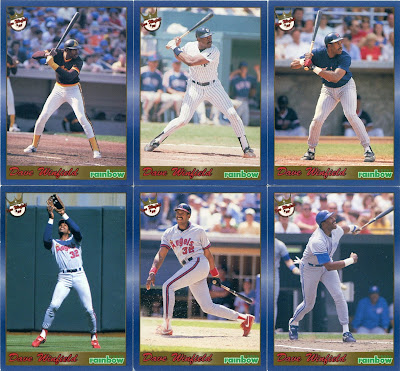 Here's a six-pack of Dave Winfield.

These apparently come from a Winfield-exclusive oddball set that tracks the former slugger's entire career... 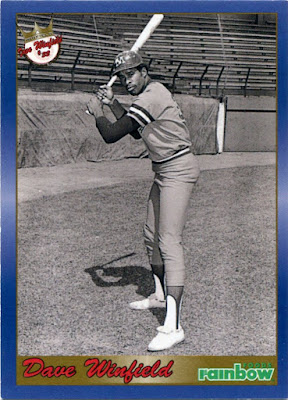 ...and it goes all the way back to his college days.

After getting a glimpse of Winfield in those mustard yellow Minnesota jerseys, I guess it's fitting that he became a Padre. 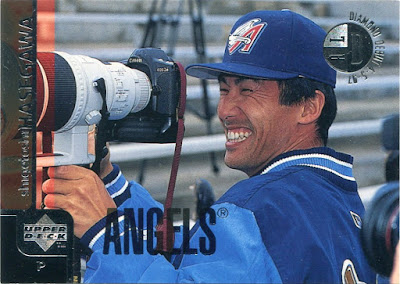 This last jam-packed PWE came courtesy of Tim of the fantastic "I Love the Smell of Cardboard in the Morning" blog.

Tim and I have swapped cards a few times now, and he has one of the best "success percentage" rates of anyone I've traded with. I think I needed about twelve or thirteen of the 15 total cards that were in this envelope, which is a staggeringly good number.

The unabashed fun started with this Shigetoshi Hasegawa "behind the camera" shot.

I guess I enjoy the irony of pictures of guys taking pictures. 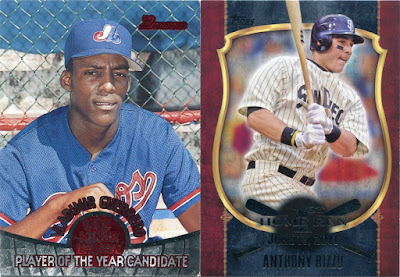 These are both top-tier player collection hits, and the Rizzo is one of my new favorite cards of 2015.

Not only did Topps produce a card commemorating his short stint as a Padre, but they did so in throwback form. 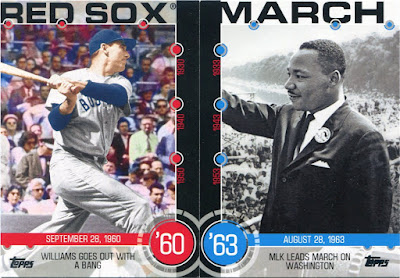 This isn't the most well-designed insert set in the world, but the subject matter is definitely right up my alley.

My baseball and non-baseball collections benefited greatly from this PWE.

Tim did the near-unthinkable by knocking out three Dime Box Dozen needs in a single envelope.

I don't keep a tracker of which people have knocked out my DBD wants (though, now that I think of it, I wish I did), but Tim has to be right up there with the best.

Maybe he'll rub out all twelve of 'em one day. 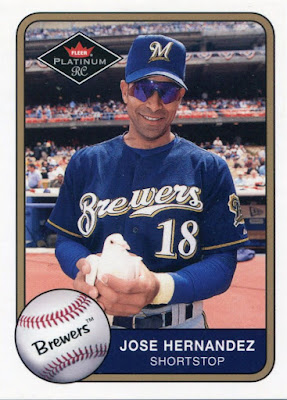 Even with throwbacks, Splendid Splinters, and Dime Box Dozens, I think this was ultimately my favorite card from this PWE.

It's hard for me to describe just how much I enjoy getting fun, random cards like this one, cards that I likely would've never discovered had it not been for the eagle eyes of people like Tim. This is probably my single favorite thing about trading with all of you.

Here, with backstory unknown, is Jose Hernandez holding a dove on a baseball card.

Make of it what you will.

In the meantime, I guess I'll just have to love my baseball cards when I can. You know what? That's okay.

It's not like they're going anywhere.
Posted by Nick at 6:20 PM

Glad you got the cards and enjoyed them, Nick! Enjoy your class as well!

This time of year is always harder to focus on collecting. I usually don't even get to sit down in front of the computer until 10pm.

Congrats on receiving all those great cards in the mail!

Enjoy! FYI, I'm moving to Milwaukee July 26, so let me know if you you're free between now and then to meet at Elite. I have another stack of cards ready for you.

My LCS had a bunch of the Yankee sets. Glad you like them