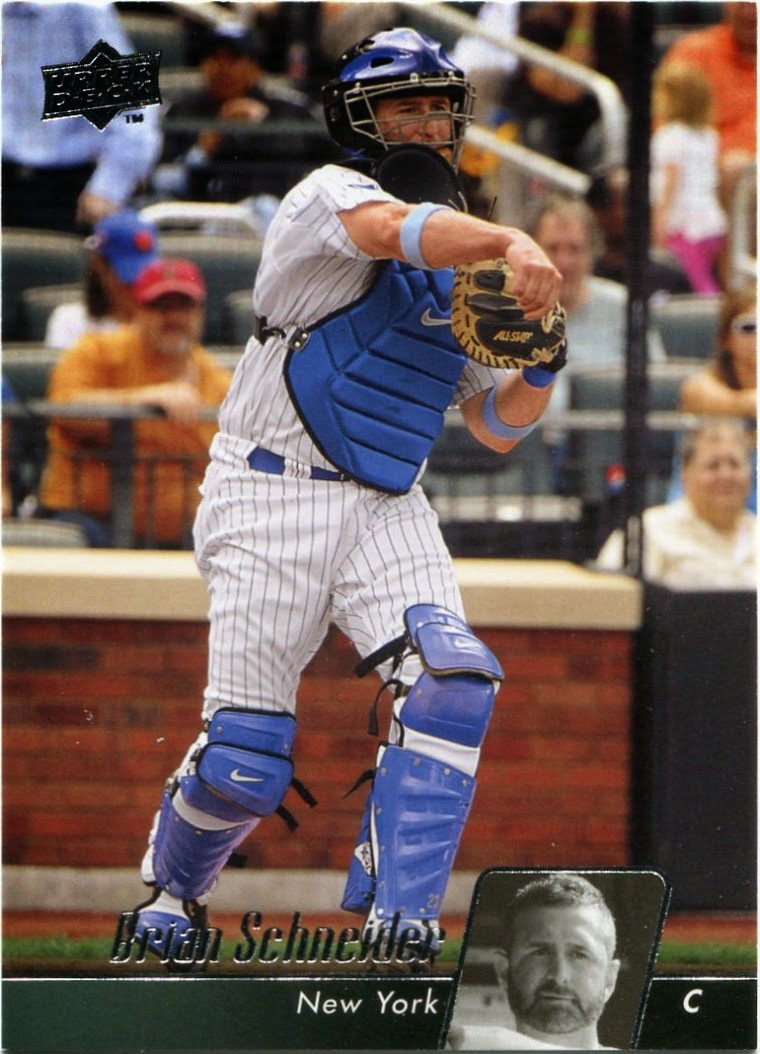 I haven't been a huge TV guy in recent years, but one of my favorite shows ended last night.

How I Met Your Mother called it quits after nine seasons. Although I only started getting into HIMYM (as the fans call it) last year, it's quickly climbed up my TV show ladder.

In all honesty, though, nine years may have been stretching it a bit. Most fans will agree that the more recent seasons haven't been as great. While I don't think HIMYM ever "jumped the shark", as they say, it was definitely time to put the show to bed.

This is one topic that involves virtually all areas of entertainment. Did there really need to be a Major League III? Did the Ramones really need to release any of their last few unremarkable albums?

By now with this blog, you should probably know that I'll be trying to weave this discussion into the world of cardboard. While many actual players hung around the game for a few years too long (ahem, Steve Carlton), the same can be said for certain brands of baseball cards as well.

For lack of a better term, some sets did indeed "jump the shark".

Some may argue that Upper Deck was one of them. I personally don't think so. While their 2007 and 2009 releases may have been forgettable, '06 and '08 UD were nothing short of spectacular.

Plus, even with the no-logos barrier, I happen to think that 2010 Upper Deck was pretty darn nice. 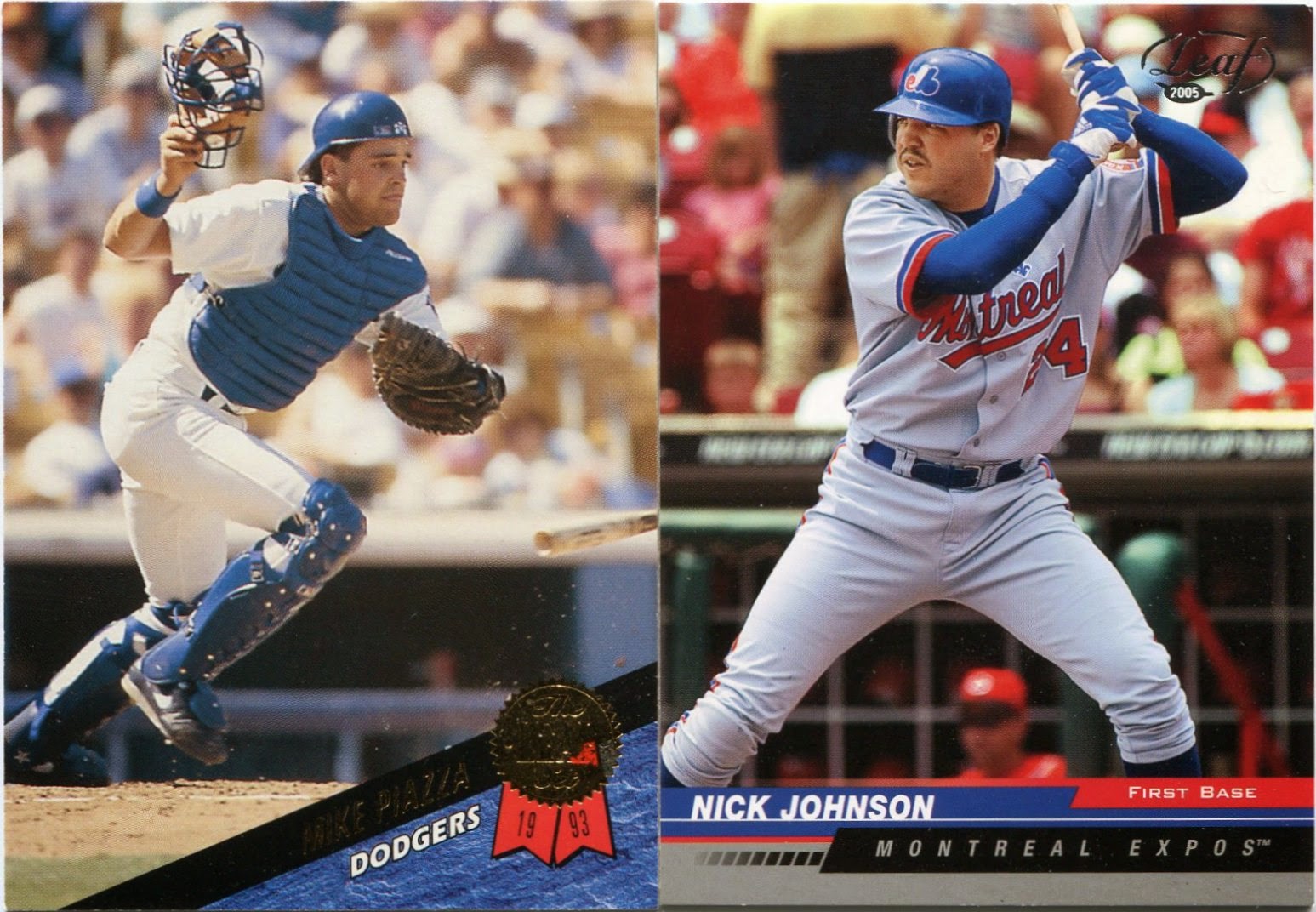 On the other hand, some major brands didn't know when to call it quits.

I probably don't need to tell you how awesome Leaf was in its prime. Their 1993 release is still one of the more beautiful sets ever created.

Though there were a few breaks in the brand's history, Leaf's final Flagship checklist hit the shelves in 2005. I often forget that it lasted that long. Or maybe I just don't want to remember.

Many of Leaf's later designs looked awkwardly similar. Like a lot of once-great bands tend to do, I think Leaf was existing on the name alone near the end. (Think R.E.M. here.)

By 2005, it was painfully obvious that Leaf was a mere shadow of its former self. In 1988, Score produced what might be the greatest inaugural set ever.

I've never been able to find many problems with their first Flagship checklist. The same can be said about a lot of Score's earlier releases.

In contrast to that, though, I constantly find myself mixing up a lot of their later sets. That is, if I can even remember what they look like in the first place.

Exactly a decade after their terrific inaugural set hit the streets, Score went out with a whimper in 1998.

It was a shame to see such a great brand end so forgettably. 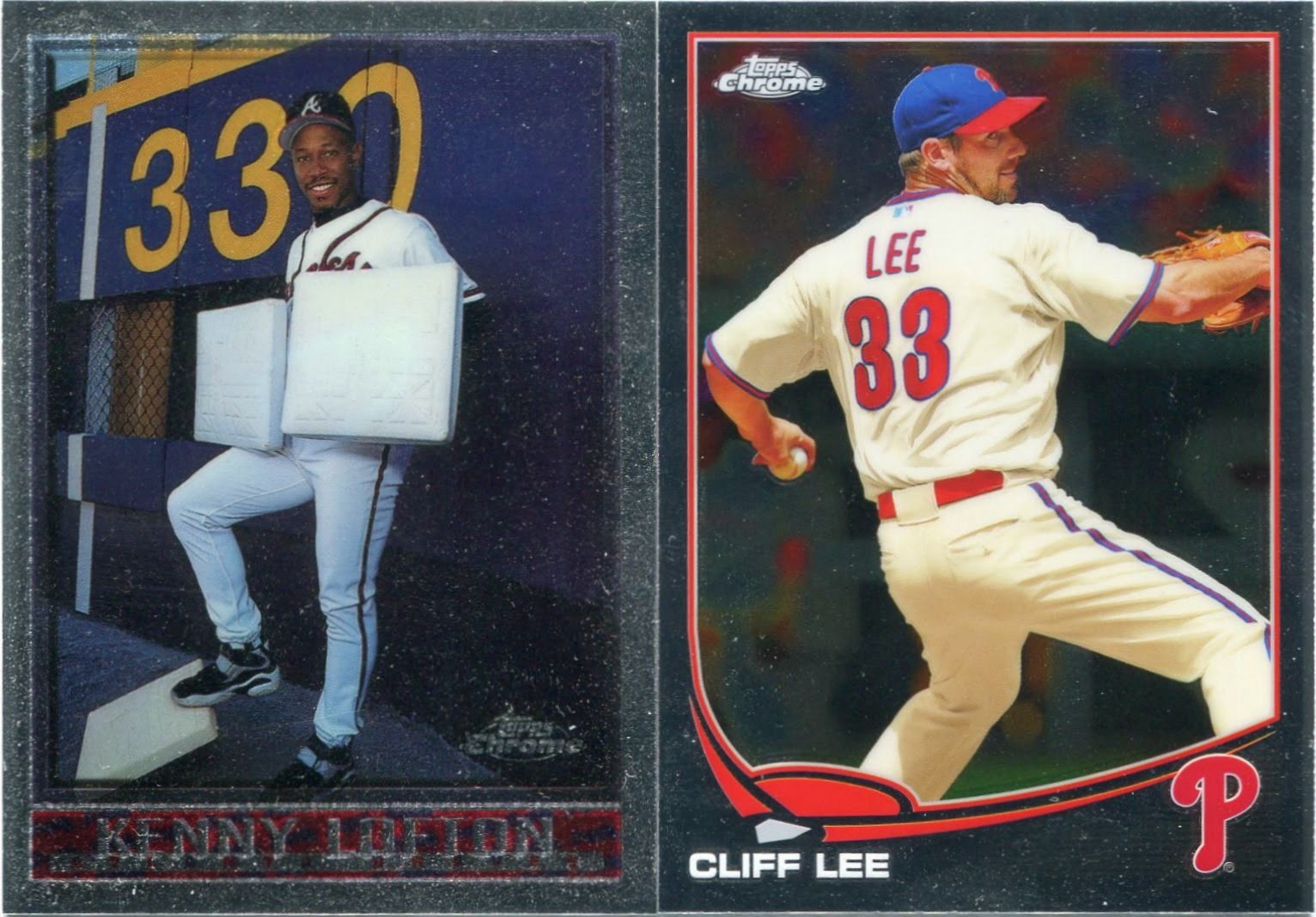 Often times, the novelty of a certain set wears off after a while.

I personally think that's the case with Topps Chrome. It jumped the shark a long, long time ago.

When the brand debuted in 1996, chrome was still a relatively new technology in the hobby. I'm sure the reaction to a lot of pack-busters at that time was something along the lines of "Oooh...look at all the chrome!".

I happen to like the chrome versions of some '90s Topps sets (including '98 Topps) better than the regular Flagship singles. I'm not sure whether that's because the chrome was that interesting or if the designs were simply that bad, though.

These days, Topps Chrome is likely on its last legs. While there seem to be a few people that tolerate the brand, there doesn't seem to be a ton of excitement surrounding it anymore. It's just kind of there. 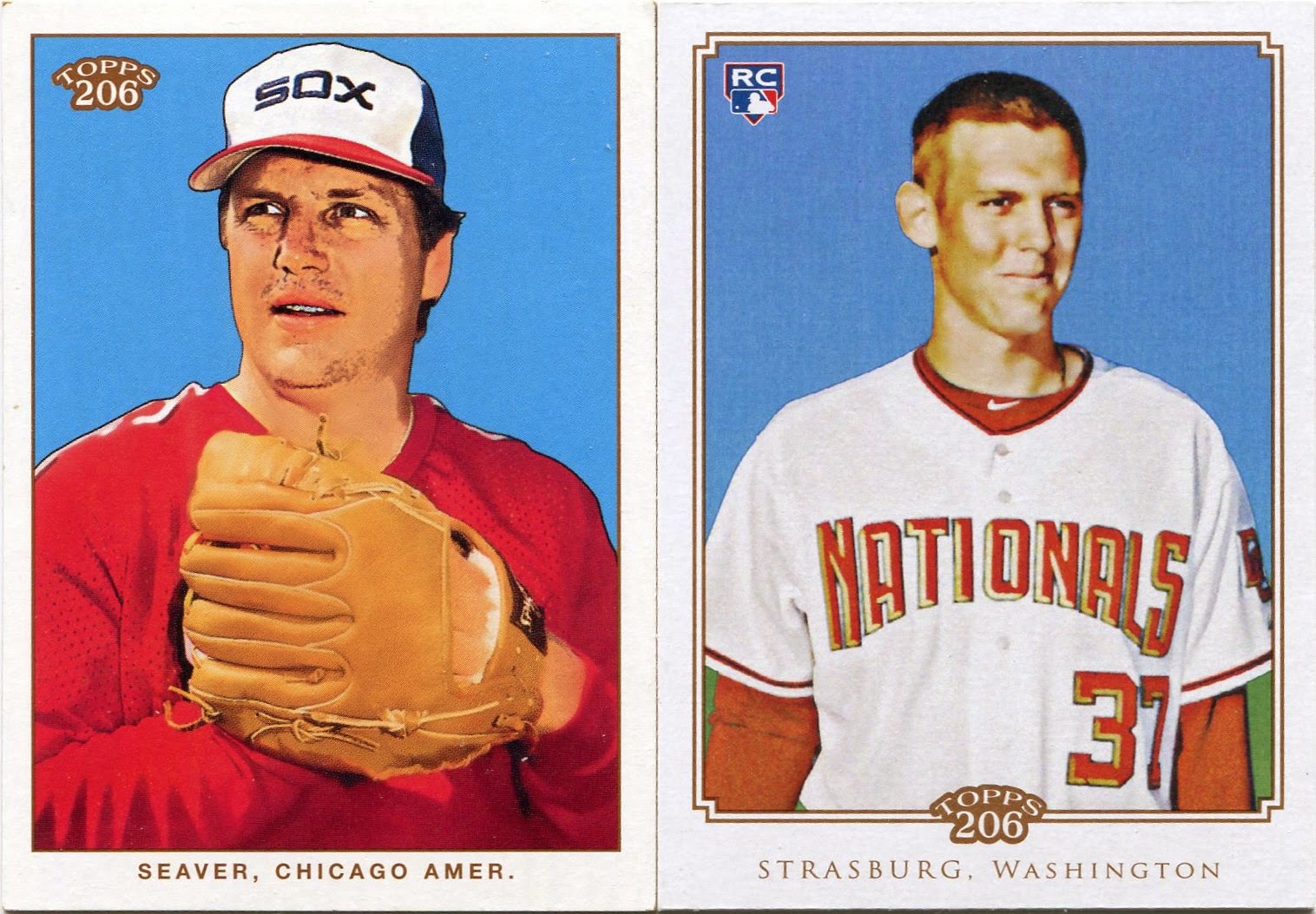 The novelty can wear off fairly easily with retro-themed sets.

After all, you can only do the same thing for so long. Topps released some truly great tobacco-themed sets in the early 2000's. While I'm not sure how the 205/206 brands were received by collectors at the time, I've always thought it was a great idea.

For some reason, two more Topps 206 sets were released in 2009 and 2010. The latter had to rely on a gimmicky "men without hats" concept for its base checklist. (All of the SPs, meanwhile, feature guys in caps.)

I mean, you can only take the tobacco thing so far. 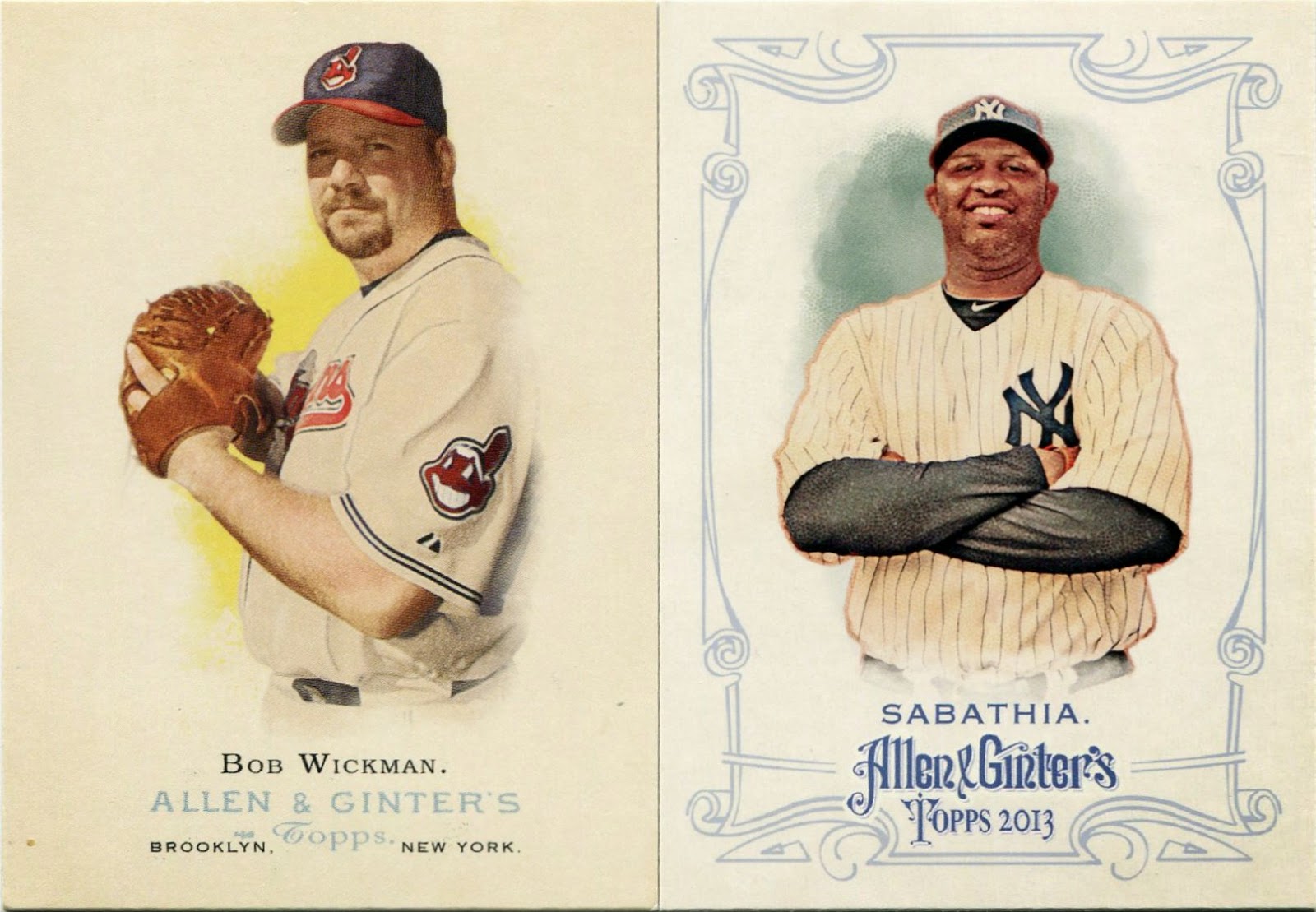 Someone needs to tell that to A&G.

Others may disagree with me here, but I think Allen and Ginter is about to jump the shark. That is, if it hasn't already done so.

Their earlier releases were new, clean, and true to the original. A&G was a shot in the arm to what was a fairly drab few years for the hobby at the time. I used to get insanely hyped for each coming release.

Nowadays, I seem to walk into my local Target at one point over the summer and say, "Oh, I guess A&G is out now."

There's little to no excitement anymore.

Though 2013 was perhaps one of the brand's better releases in the past few years, it was a far cry from the original A&G. All I can say to Topps is to tread lightly.

It may just jump the shark this year. 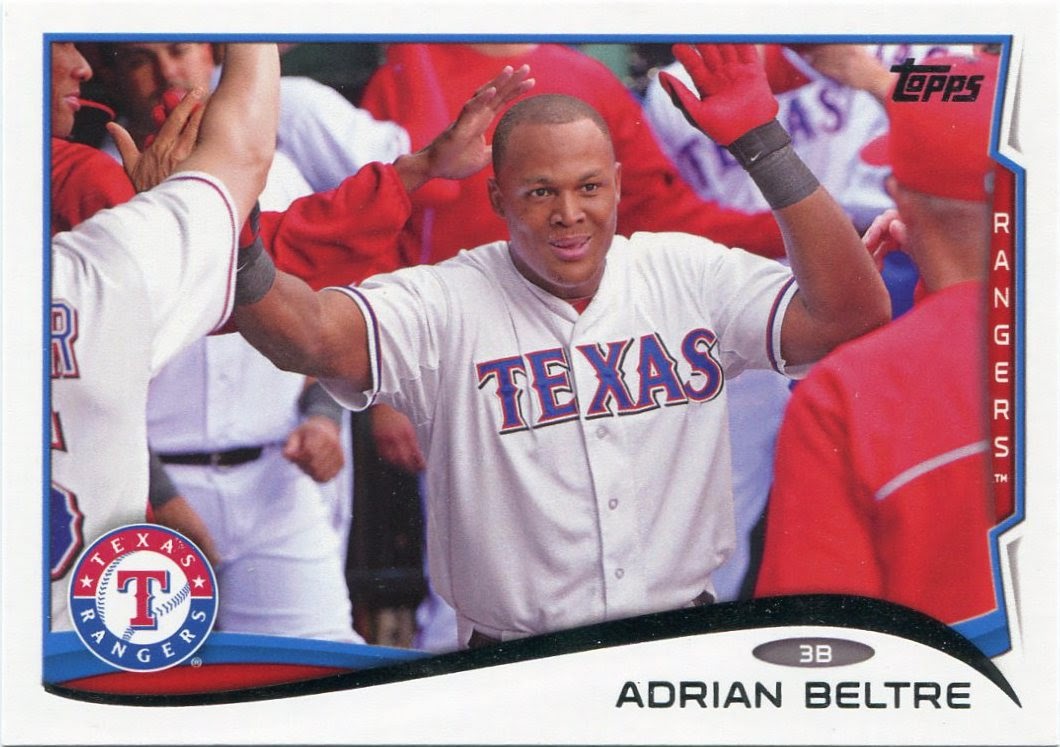 Topps Flagship may have had its peaks and valleys over the years.

Even after 63 years in the hobby, though, it's still going strong. That's quite a remarkable feat if you stop and think about it.

I doubt you can find another TV show, movie series, or band that can say they're still around after 63 years. (Although the Rolling Stones sure seem to be getting close.)

In that regard, Topps Flagship is in a class of its own.

I don't see it jumping the shark anytime soon.
Posted by Nick at 6:11 PM

I'll agree that Topps flagship is still the standard for a set collectors, I think you'll agree the number of parallels is getting out of hand and the inserts leave a lot to be desired. Plus Topps hasn't broken formula with it's flagship set since it was bought by Michael Eisner.

I really like A&G mainly because of it's non-baseball inclusions, plus in general the base design looks great and they looks great autographed, and they have interesting themes to it's inserts.

One set I think is already done is Gyspy Queen. I liked the inaugural set and even the second year, but it's getting old, just my opinion.

I also think that Gypsy Queen is pretty much done. I thought that the 2013 set was an improvement over the 2012 set, but that's kind of like saying that stepping in a cow pie is better than stepping in a dog turd.

Allen & Ginter's fills a particular niche very well, and I hope that it can keep itself fresh for a while longer. I like the oddball stuff that Topps puts into the set and the variety of the insert and mini themes, although some of the ideas do seem to come back around from time to time.

The best show on TV right now is "Growing up Fisher". If you haven't seen it you should check it out on Tuesday night. You won't regret it.