If I were a supercollector 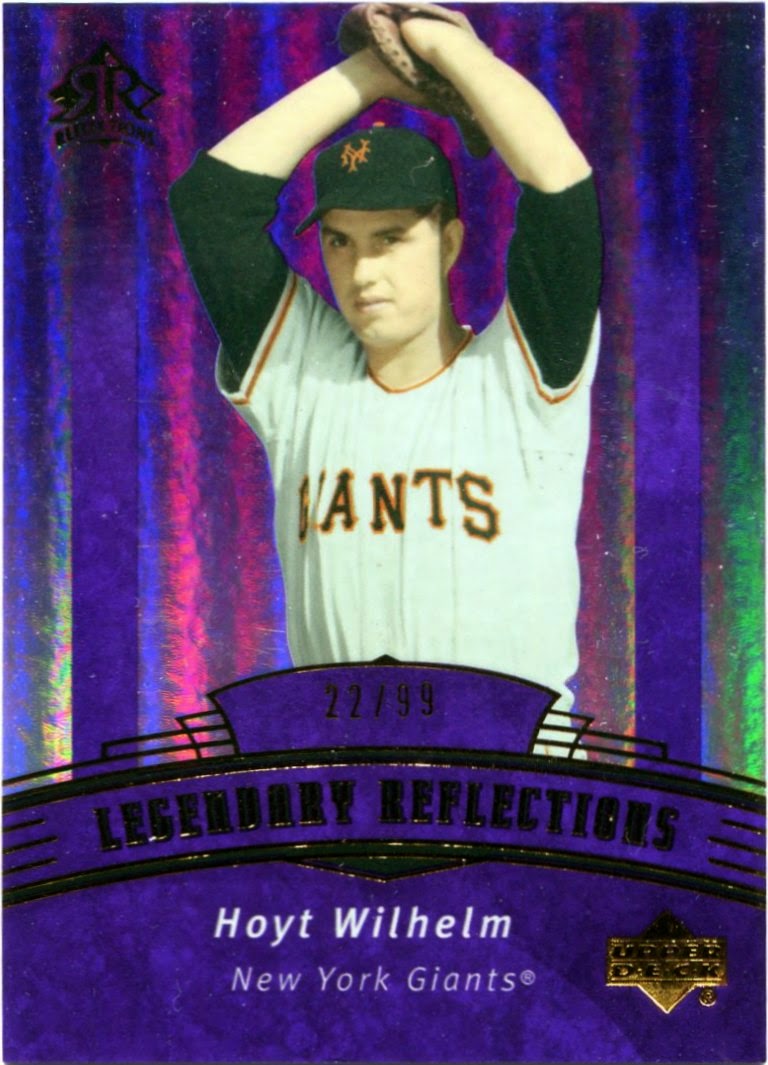 What is a supercollector?

To put it simply, a supercollector is someone who tries to acquire every single card ever made of a certain player.

Okay, so what makes them any different from a regular collector?

Take me, for instance. I collect hundreds of different guys, but I don't supercollect any of them. For one thing, I don't have the money to go out chasing low-numbered parallels of someone like Ichiro. I don't have the time to check Ebay day after day for new cards, either.

I tried being a Hoyt Wilhelm supercollector for a while. I'd dig through people's trade lists and hunt Ebay for Hoyts I didn't already have. I did a decent job, as my Hoyt collection is currently home to some of his rarer cards.

In the end, though, it just didn't pan out. I take my hat off to anyone that can keep up a supercollection, but it's not for me.

Still, if I were to ever come into a large sum of cash one day, I've composed a short list of future supercollection candidates in my head. 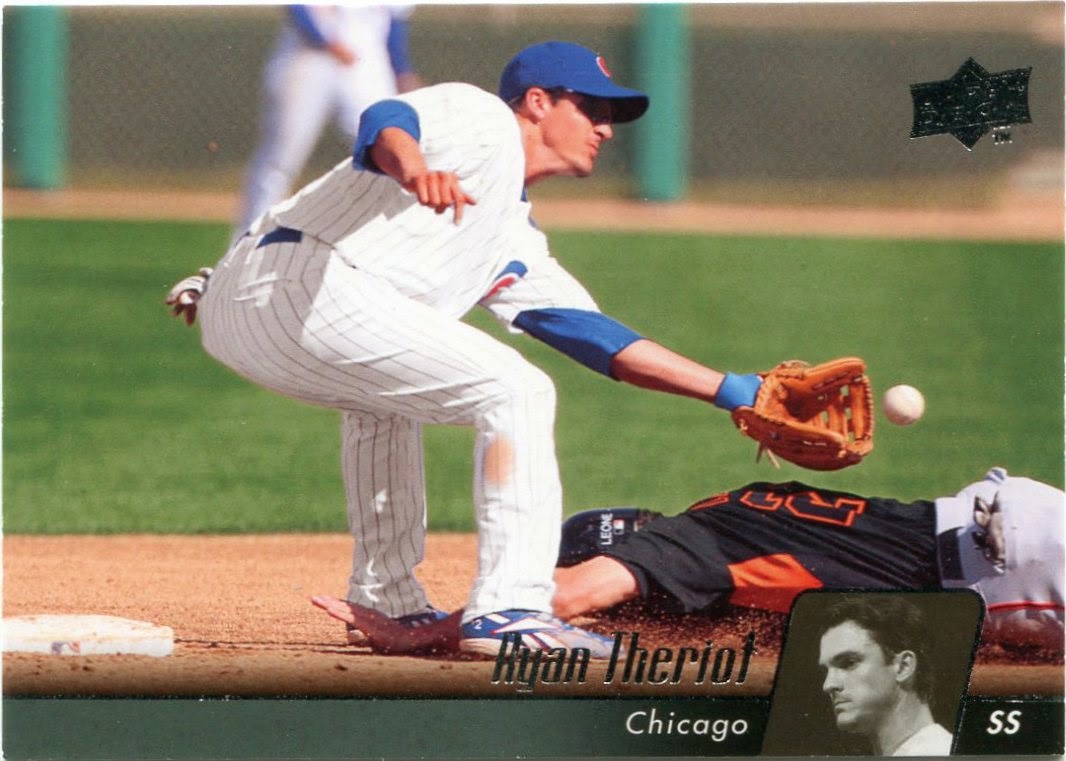 My favorite player of the last ten years or so is definitely Vladimir Guerrero.

Still, even with an unlimited budget, I don't think I could supercollect him. Some of Vlad's prime cardboard came during the late '90s and early 2000's. We all know how crazy those years were for the hobby.

There are literally tens of thousands of Vlads in existence, and I sure wouldn't have the time or energy to try and find them all. If I had the power to hire a collecting secretary, then maybe.

Someone like Ryan Theriot is a more realistic possibility.

For one thing, a personal bond is important when it comes to choosing a supercollection. Theriot is probably my favorite North Sider of the last decade, and he was the shortstop for the last legitimately good Cubs teams I've had a chance to see.

Plus, he's not a huge name, so that'd make things a bit easier on my wallet.

That's always a plus when it comes to this hobby. 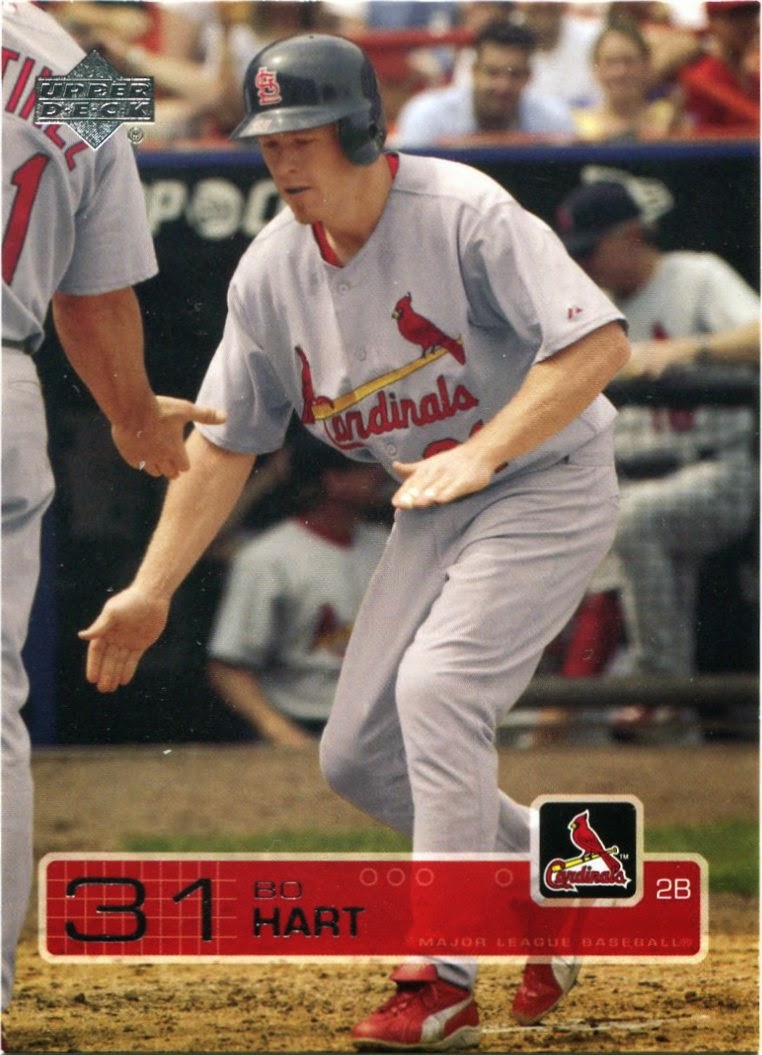 Bo Hart is one of the unquestioned icons of this blog.

I've mentioned my appreciation for him many times in the past. The fact that he lasted all of two seasons in the bigs is somewhat sad, but it does make him an ideal supercollecting candidate.

Every single one of my 33 Bo Hart cards was produced in either 2003 or 2004. Though the hobby was drunk on impossible-to-find inserts and parallels at the time, I'd be willing to go through all that craziness for Mr. Hart. 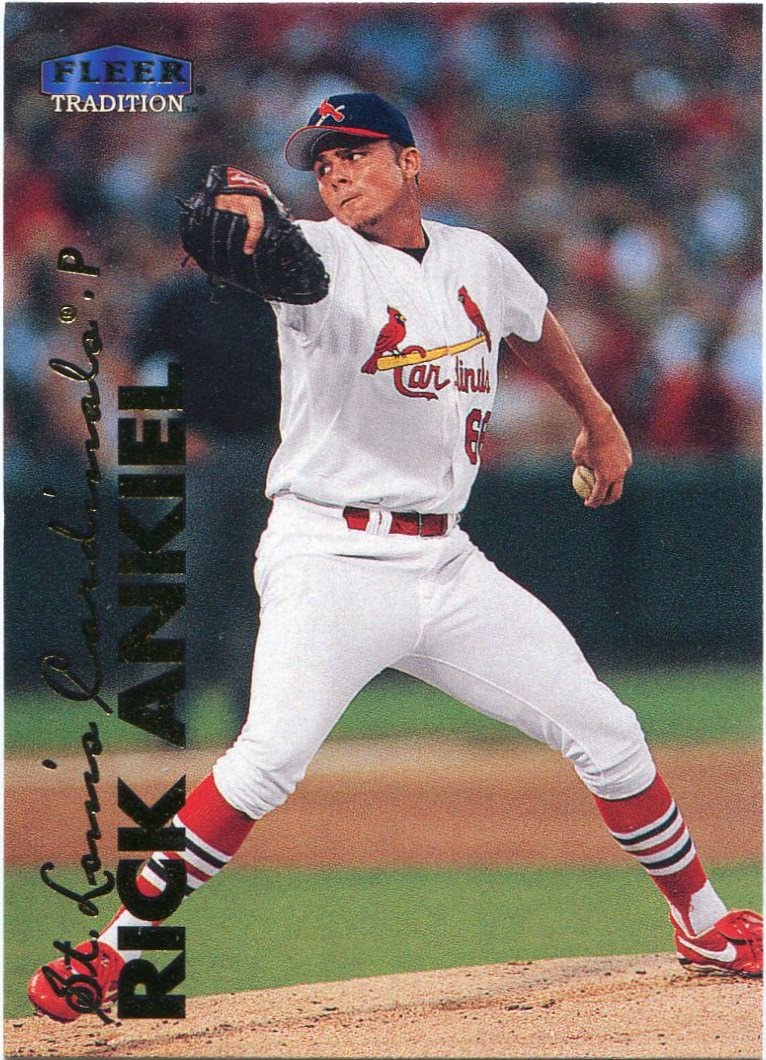 A good story is always a plus when it comes to supercollecting.

That's why I might just become a Rick Ankiel supercollector at some point in the future.

Few players in baseball history have had success as both a pitcher and a position player. Ankiel is the only one I've ever seen in my lifetime.

I remembered seeing Ankiel on the mound from my early days as a baseball fan. I was in second grade when he debuted as a pitcher in 1999. When he burst back onto the scene as an outfielder, I was in high school. I couldn't believe that it was the very same Rick Ankiel.

Again, the fact that his rookie cards were issued during the peak of cardboard craziness would make a supercollection extremely difficult.

Then again, a story like Rick Ankiel's doesn't come along every day. 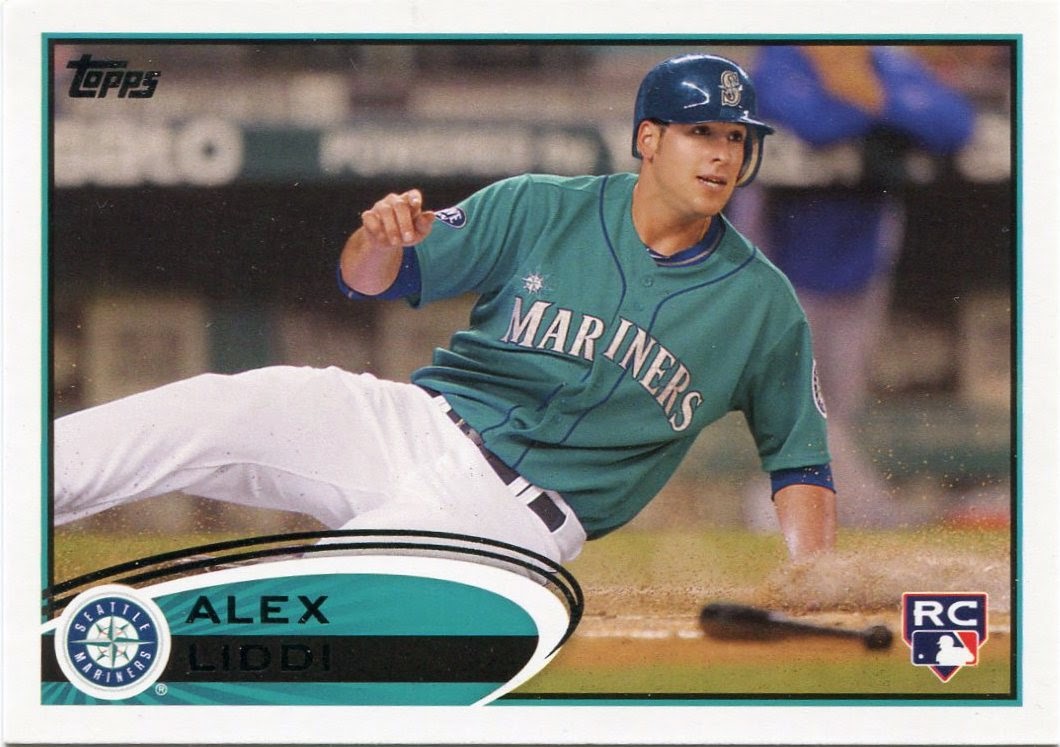 The vast majority of my family's heritage can be traced back to Italy.

I take a lot of pride in my background. Starting a supercollection of Alex Liddi would be a great way to show that.

Because he was the first (and, to date, the only) major leaguer to be born and raised in Italy. Liddi was once a hot prospect with the Mariners, but he's unfortunately flamed out in recent years. He's currently in the minors with my hometown White Sox.

Liddi is kind of like Bo Hart, in that the only cards he has were issued within a two or three-year span.

A supercollection of someone like him certainly sounds doable. 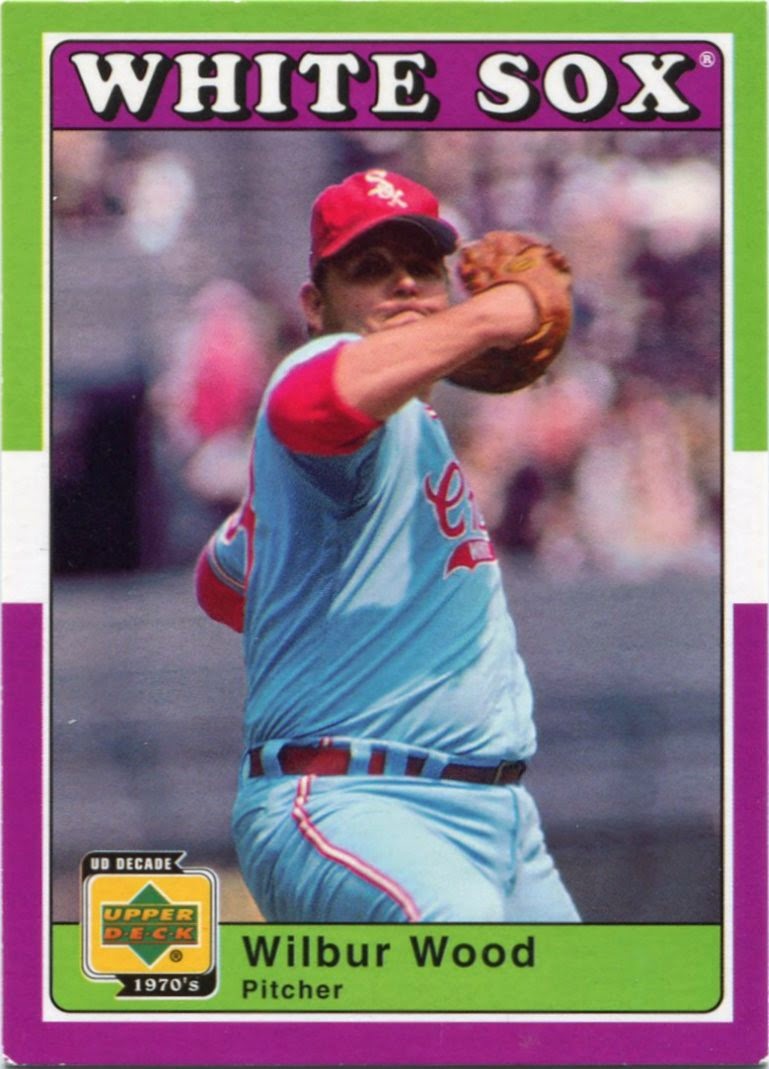 As far as supercollecting goes, I think the best bet would be someone from the '60s or '70s.

However, Hall of Famers like Mays or Killebrew would probably be too rich for my blood. Both of those guys made their debut back in the '50s, which means their rookie cards will especially prove costly.

That's why the best option would probably be a fan favorite type of guy. Mark Fidrych and Bill Lee would be obvious supercollecting choices for me, but Wilbur Wood would definitely be an interesting subject as well.

He played for a long time, but none of his cards are all that tough to find. Plus, it's not like '60s and '70s Topps featured a boatload of parallels or anything.

And, although I'd love to see Wilbur Wood pop up in some of today's sets, the fact that he doesn't have many newer issues would make supercollecting a whole lot easier. The most recent cards I have of his are his 2001 UD Decade (seen above) and 2004 Topps Fan Favorites singles.

Should I ever decide to try my and at supercollecting again, Wilbur Wood would definitely be on my radar. 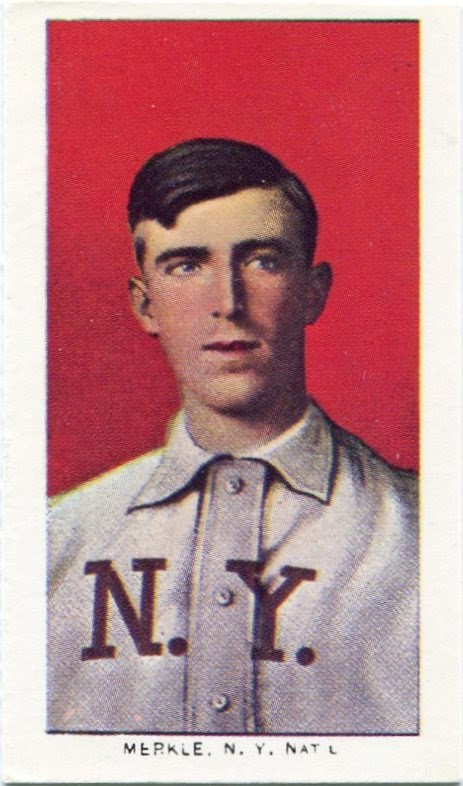 Perhaps the most ambitious supercollecting route would be someone from baseball's early days.

Again, a non-Hall of Famer would be ideal. I'm sure Ty Cobb and Babe Ruth supercollectors exist, but I can't imagine how much money they'd have to make to afford such a conquest.

If I had to supercollect a turn-of-the-century ballplayer, I'd go with Fred Merkle. As many fans know, his failure to touch second base during a crucial Cubs-Giants contest in 1908 made him one of the game's most infamous and intriguing figures.

The fact that he played into the 1920's sometimes gets lost to history, though.

Should I ever have the money to do so, I'd kill for the chance to become a Fred Merkle supercollector.

On the plus side, I wouldn't have to worry about ten thousand different types of parallels. The backs of old tobacco cards may have a few variations, but it's nothing near the madness of today's hobby.

On the other hand, I'm sure I'd have a hell of a time trying to track down all of his cards. There aren't many oddballs from his era, but the few that do exist are darn near impossible to find.

Then again, that's the kind of thing you sign up for when you become a supercollector.

I tip my hat to the existing supercollectors out there, but I'm not ready to do it just yet.

I'll stick to regular old collecting for now.
Posted by Nick at 6:24 PM

I think I might expand "Supercollector" to teams also.And other collectibles of a given team or player besides just cards.But yes, a true supercollector needs a lot of available time and cash for most players. I'm somewhat of one when it comes to Jim Thome as an Indian, Joe Charboneau (he only has about 50 cards),Steve Olin and Jim Abbott.But I have a lot of odd, small collections as you have. Anything that catches my eye !

I agree with BAseball Dad. The super collector could be expanded to the team collector. I think it's nearly impossible to complete .

I think supercollecting requires a whole different level of discipline. I have a turn of the century player collection and a modern team collection. Both collecting styles have their merits, but neither, in my case, qualify as 'super collector' status.

Anyway, I am a Todd Hundley supercollector and let me tell you, sometimes it can be exhausting. Plus, given my lack of organization skills, that means until I actually sit down and catalog what I have, I will continue to buy 3 1997 Score artist proofs and forget to pick up simple things like his 2001 Topps Traded card. I have issues.