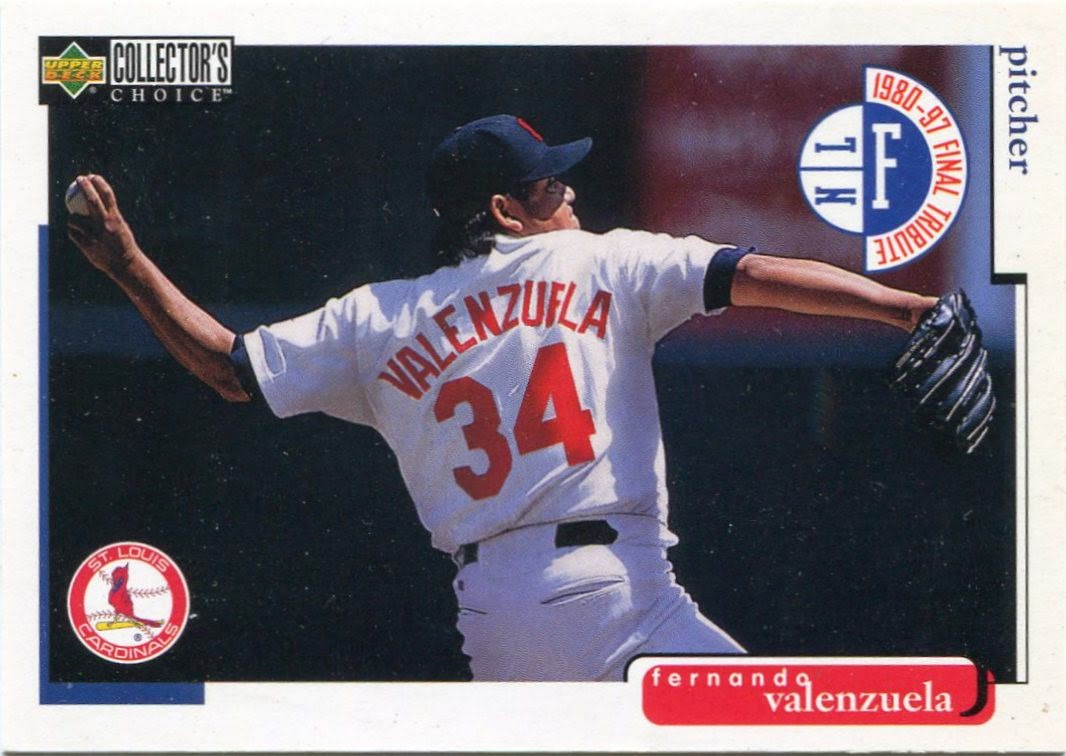 In case you missed last night's sparsely attended Part 1 of this two-part trade post, I'll be recapping the contents of an amazing blogger box sent courtesy of Jeremy, a fellow collector.

A lot of the time, I wonder where my collection would be without the help of the blogosphere. Had I not started this blog, my binders would be a shadow of their present selves.

Needless to say, the blogosphere has given me an entirely new outlook on this hobby. I'm sure most fellow bloggers would say the same.

For that, I don't know if I can ever fully show my gratitude for that valuable lesson. I'll always be in debt to the blogosphere.

Although the original intent of this blog was to showcase a few goofy cards from my goofy little collection, people have insisted on helping to build my goofy binders more than I could've ever imagined over the years.

Jeremy is one of those generous people. As if the spectacular array of mini-collection hits I featured yesterday wasn't enough, he also managed to knock out a couple treasured "Dime Box Dozen" needs.

Landing the Valenzuela you see above was especially sweet, as it was a part of the Just Commons order I placed that wound up lost in the mail. For a long time, I assumed his '98 Upper Deck issue was his only true "sunset" card.

Little did I know that there was another one floating around this whole time. Valenzuela's 1998 Collector's Choice card also features him during his brief five-game tenure with the Cardinals in '97.

As you might guess, this one is also a coveted "Short Term Stops" need as well. 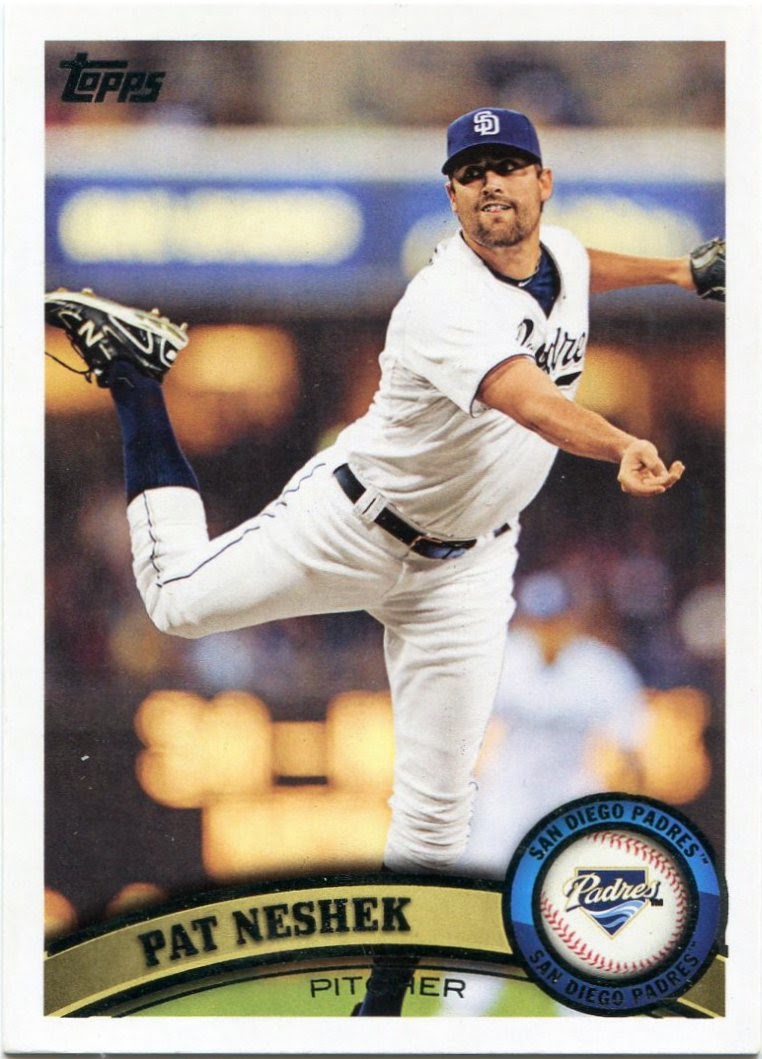 In all honesty, I was surprised this one stayed on the "Dime Box Dozen" list for as long as it did.

As a common from 2011 Topps Update, I didn't think finding a copy would be all that difficult. To my surprise, though, it sat on the sidebar for months on end.

Before Jeremy came along, I came very close to breaking down and buying one on my own. Now I don't have to go that route.

I'm fairly certain that this is the only card of pitcher and fellow collector Pat Neshek as a Padre. He spent just 25 games with the franchise in 2011.

It may not be the most aesthetically-pleasing photo in existence, but I'm sure glad to finally have it in my collection. 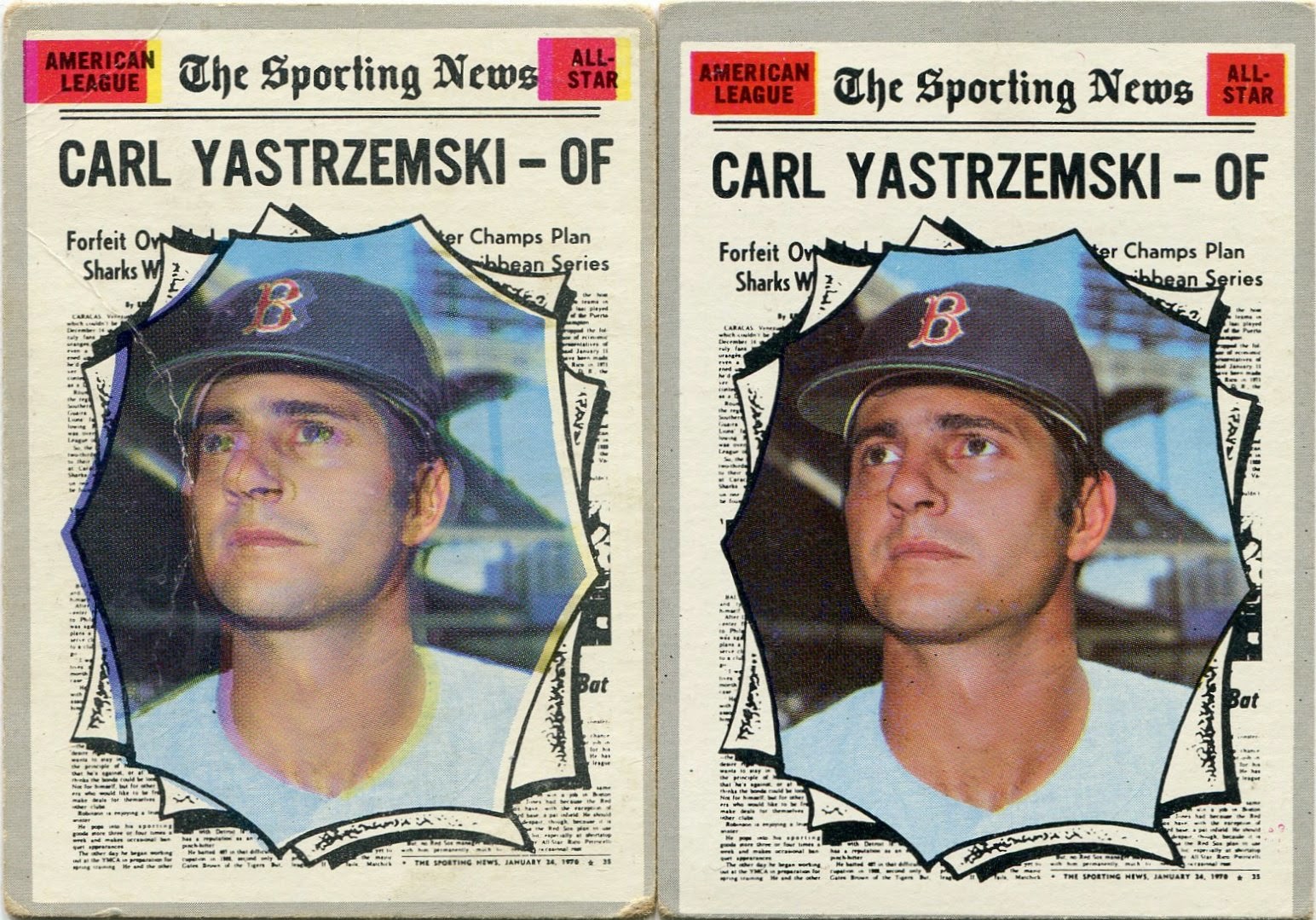 Jeremy just kept piling on with the great cardboard.

He even sprinkled in a little vintage for good measure.

Although this '70 Topps All-Star issue of "Yaz" was technically a dupe, the one Jeremy sent along was a vast upgrade over the one that was sitting in my Red Sox binder at the time.

While I've always thought those "double vision" mishaps were oddly cool, I'd rather have a standard copy. 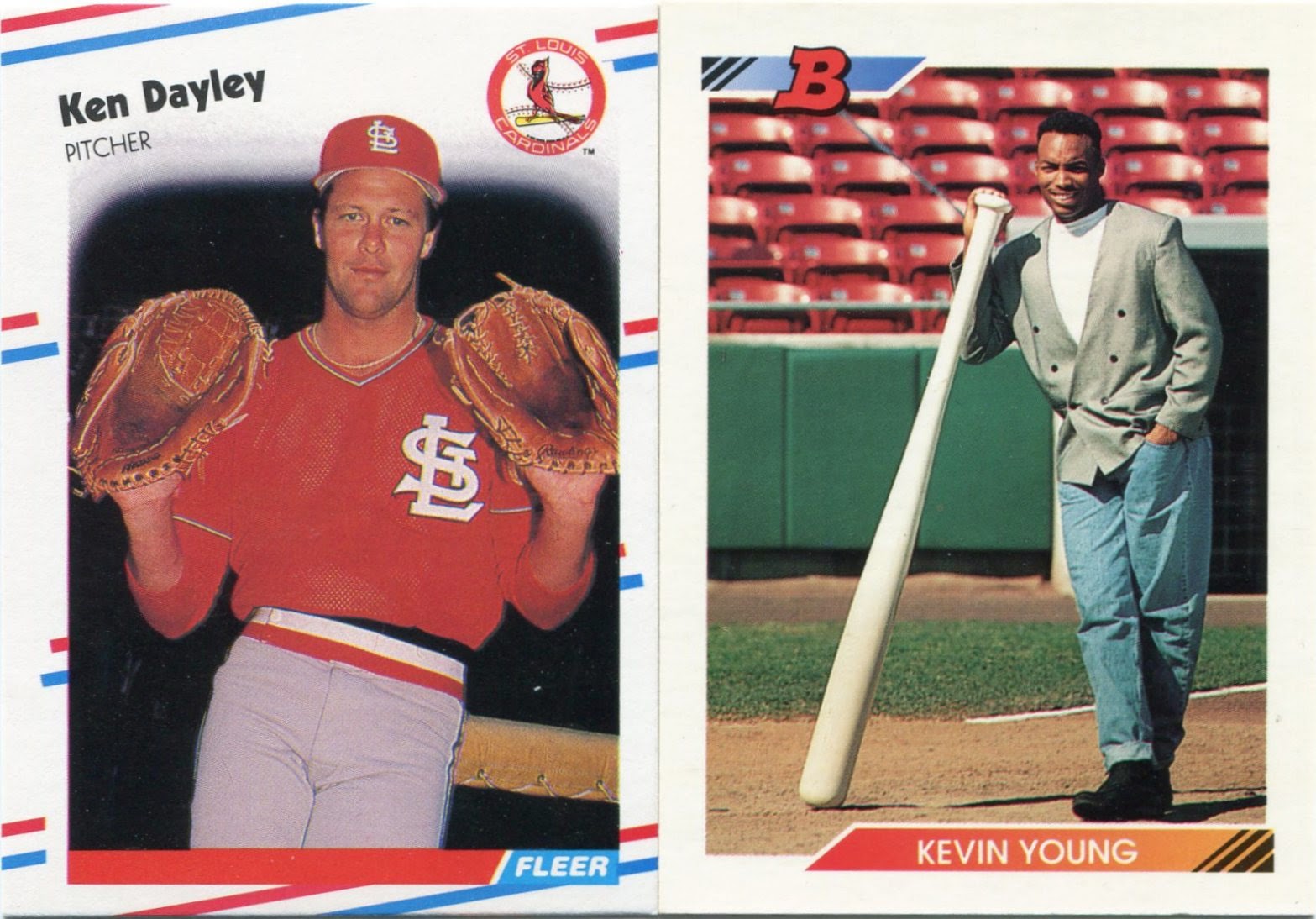 The power of random was alive and well in this box, by the way.

Take a look at these fun equipment-themed pieces. Ken Dayley is sporting two gloves for no good reason, and Kevin Young appears to be holding onto that gigantic bat for dear life.

That said, I still can't look past the awful blazer-blue jeans combo. 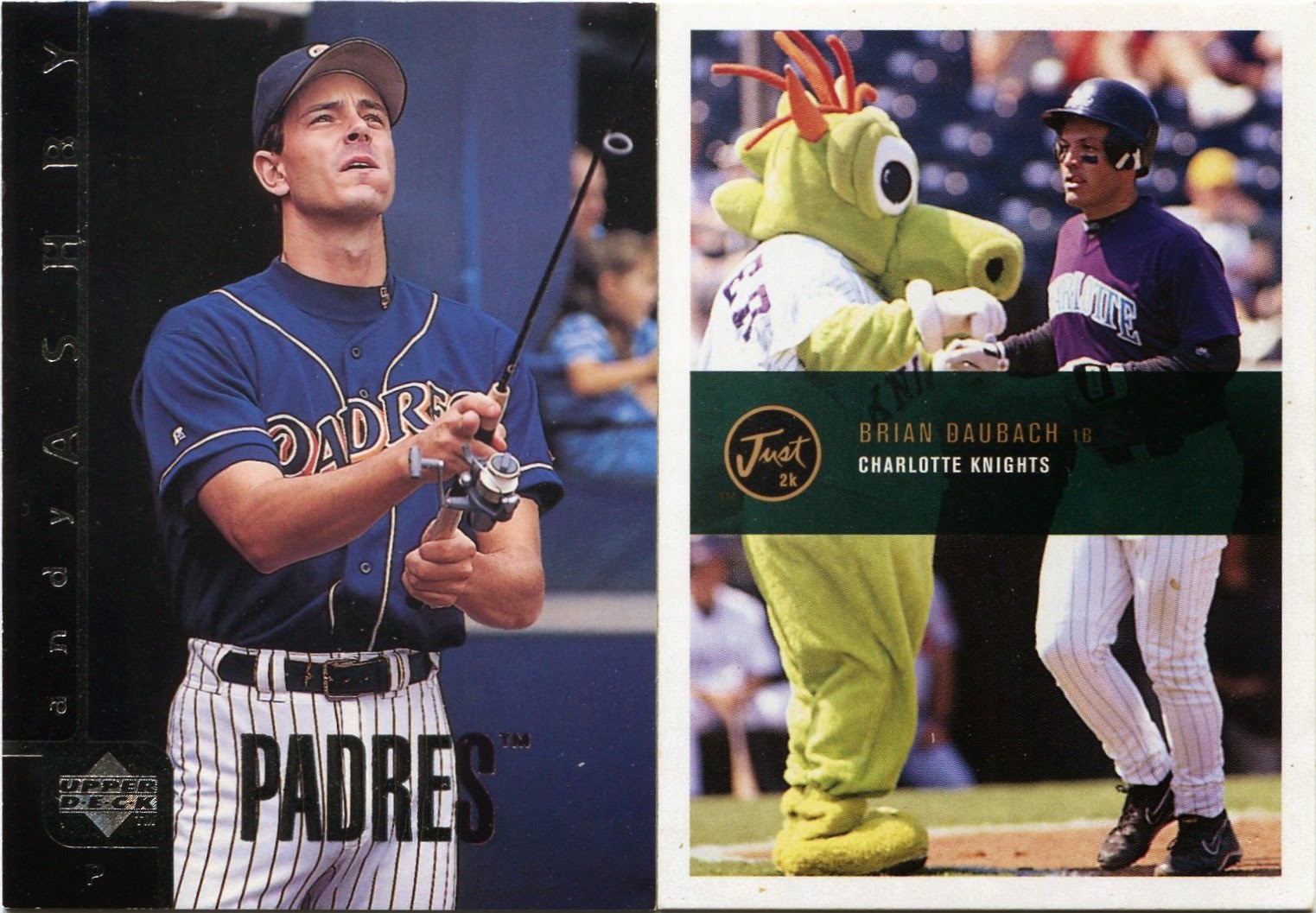 Personally, I've always found fishing to be one of the most boring leisures known to man.

Andy Ashby would probably beg to differ. Call me crazy, but I don't think he's going to get a nibble on a baseball field. Not unless he's at Marlins Park where they have fish behind the on-deck circle.

Now, if I were to pluck something like that Charlotte Knights mascot out of the water, I'd probably run for my life.

I can't figure out what the heck that thing is supposed to be. 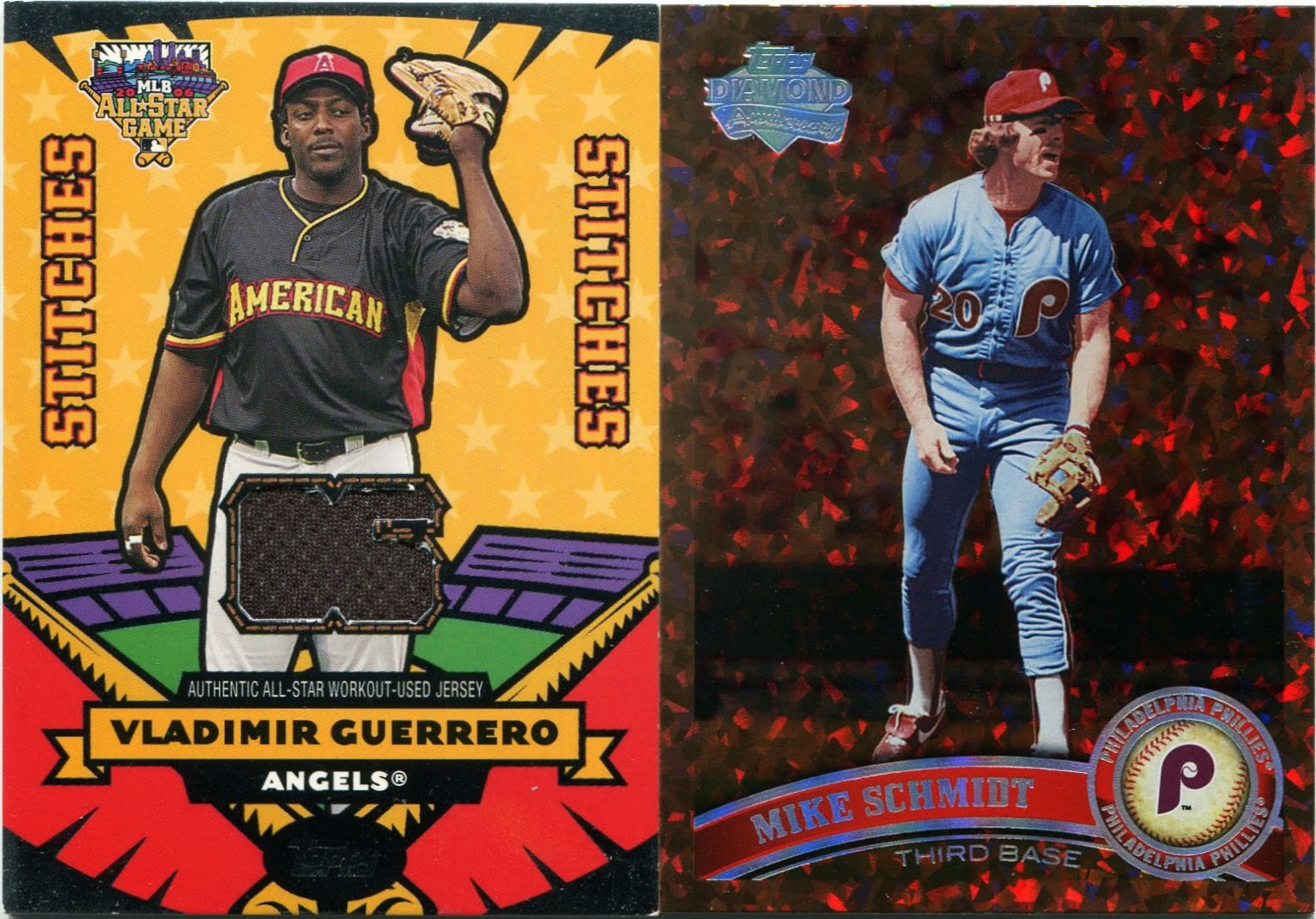 Perhaps the most striking part of Jeremy's blogger box, however, was the amount of damage it did to my player collections.

I don't actively seek out jersey cards anymore, but I certainly won't refuse one of a guy like Vlad. That would be blasphemy.

On top of that, I would have to say the terrific Schmidt liquorfractor was the shiniest card Jeremy included. 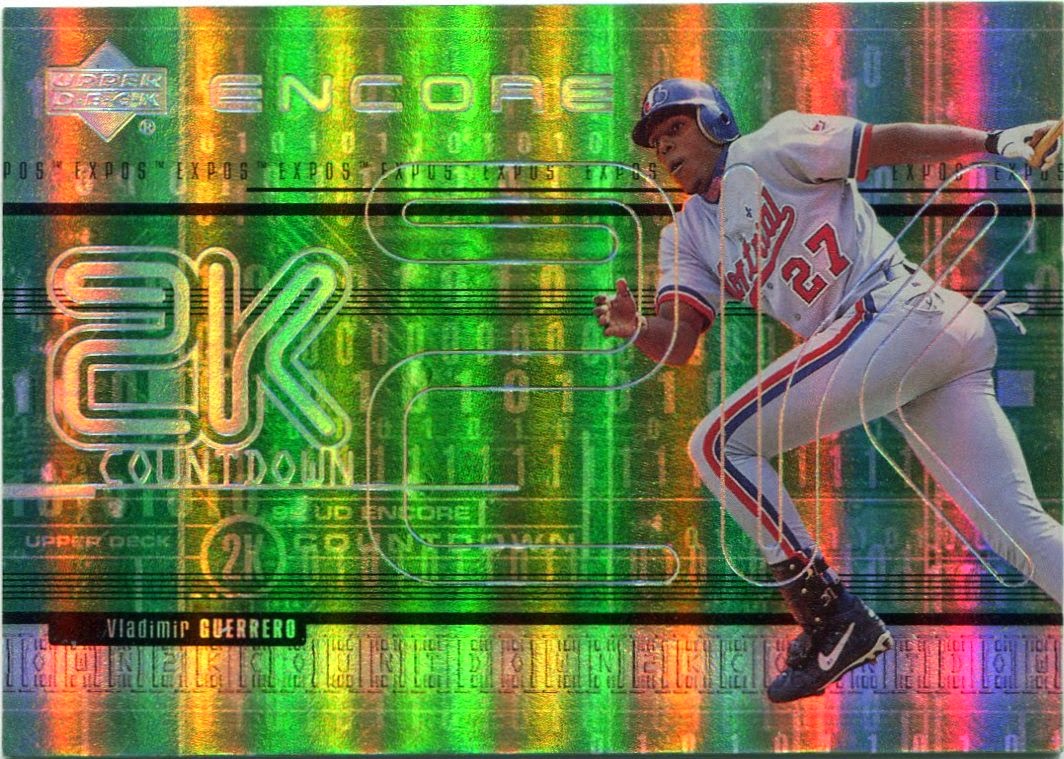 That's not to say it didn't have some competition, though.

Monstrosities like these should show you just how crazy companies went around 2000 or so. 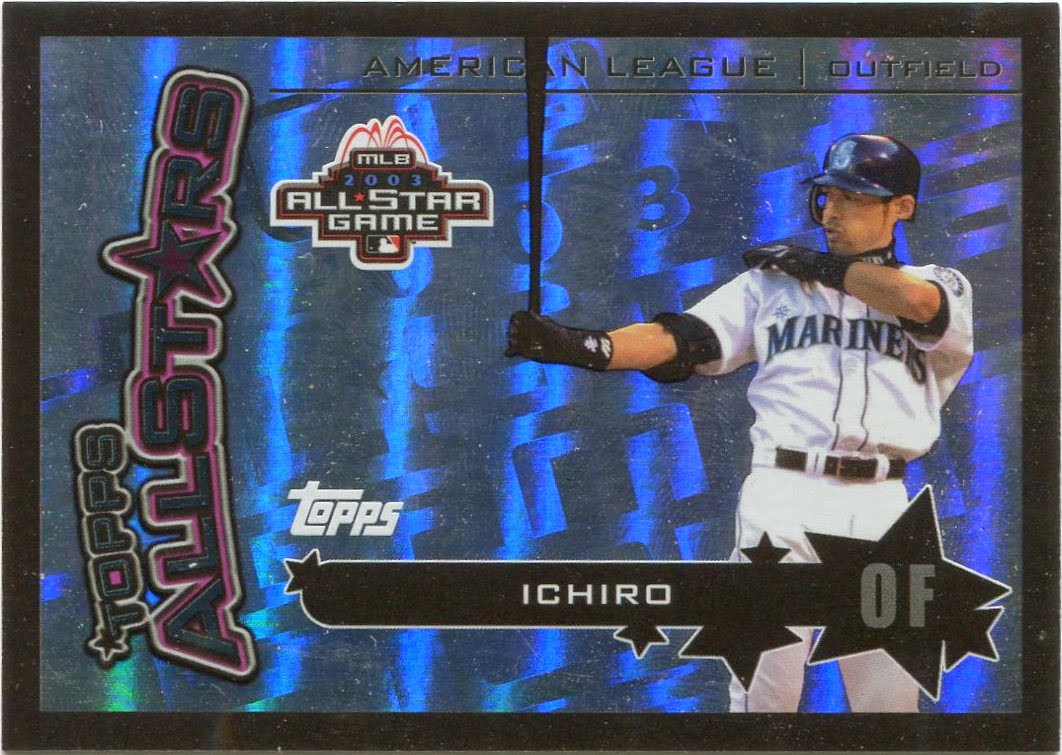 Also adding to the shininess parade was this neat Ichiro insert.

I'm shocked that I hadn't seen any of these before. 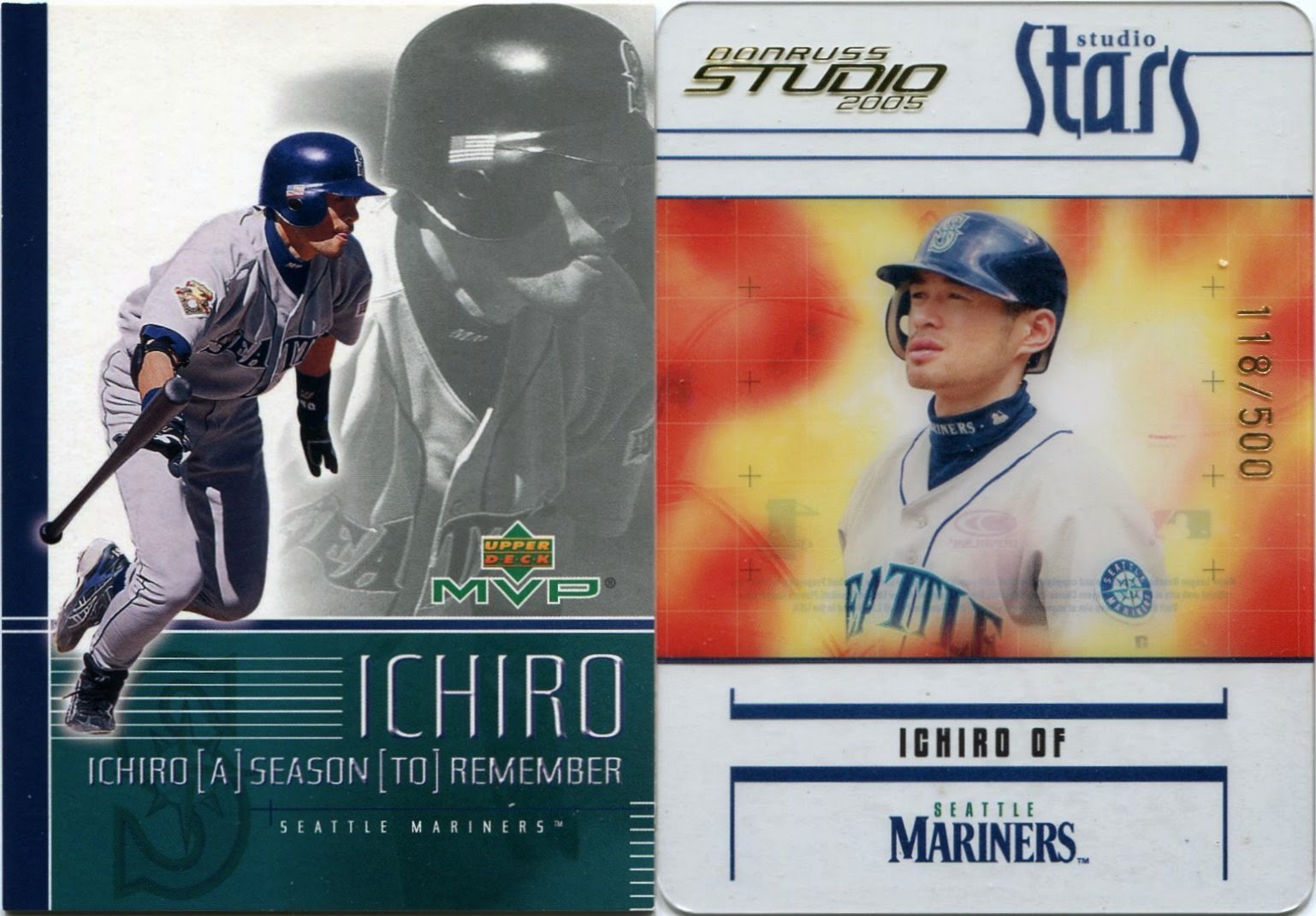 More Ichiro for your viewing pleasure.

Although they're admittedly gimmicky, I've always had a soft spot for those see-through cards. 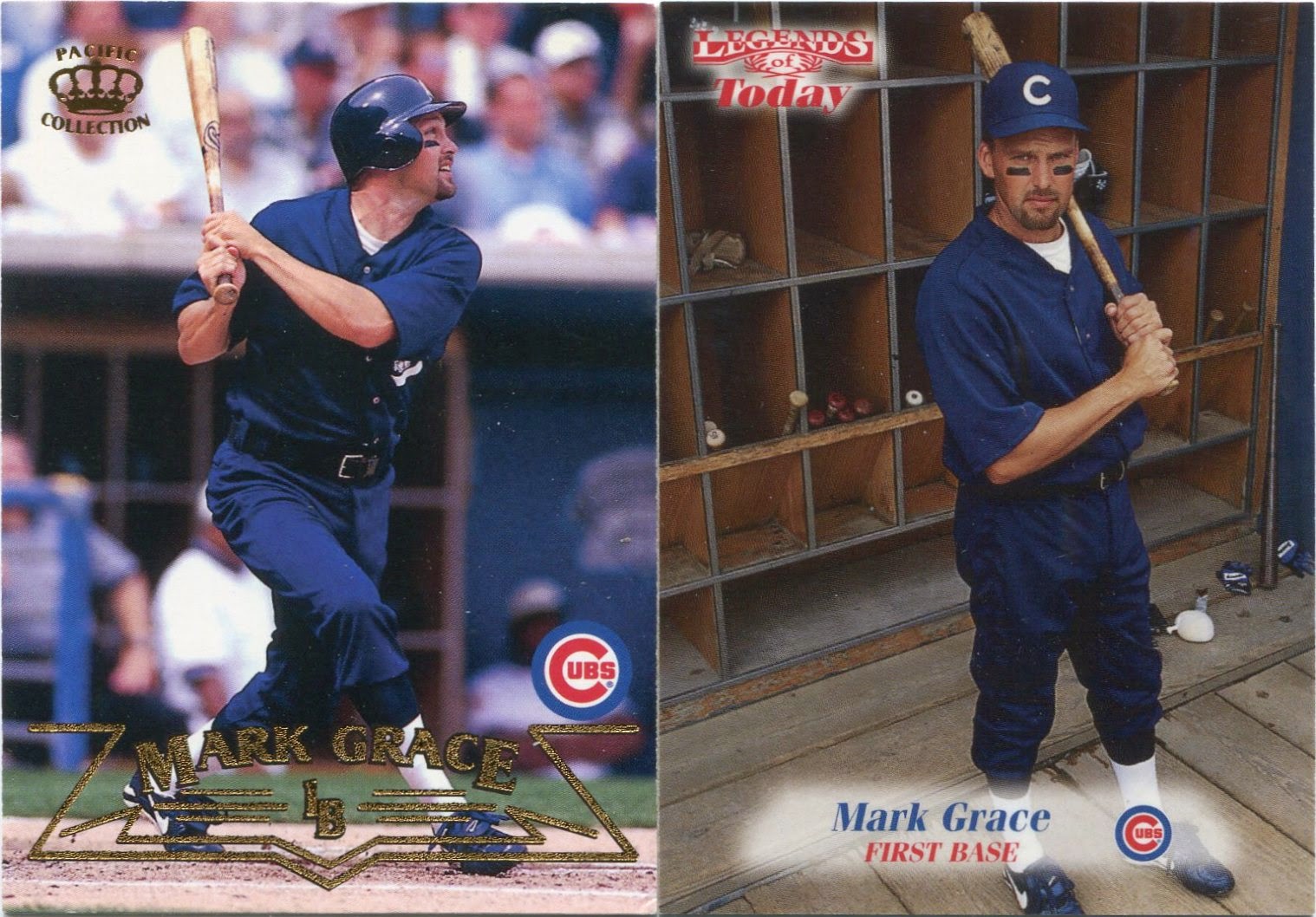 You can never go wrong with Mark Grace cards.

Even my doubles of his go to good use. My mom has her own Grace collection, so I simply hand off my extras to her.

These two, however, are staying with me. The throwbacks are a telltale sign that these shots were taken during the very first interleague Cubs-White Sox contest in 1997. Both teams wore 1906 retro jerseys to commemorate the event.

This is the first I'm seeing of Grace in the nifty duds. 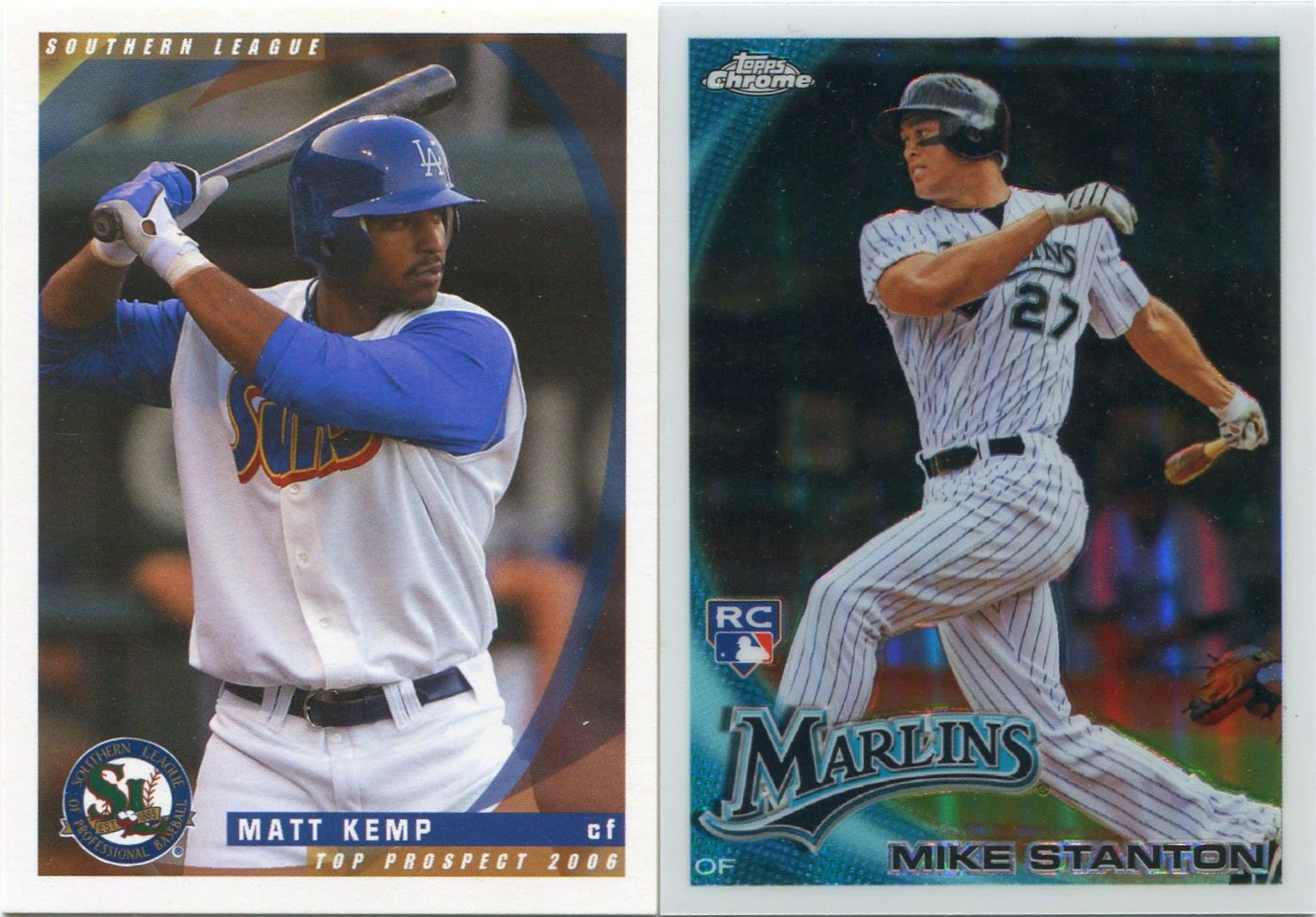 I can't imagine minor league cards of Matt Kemp are all that common. There something innately cool about seeing huge stars like him buried in the minors.

I'd still like to know where quality control was on that one. 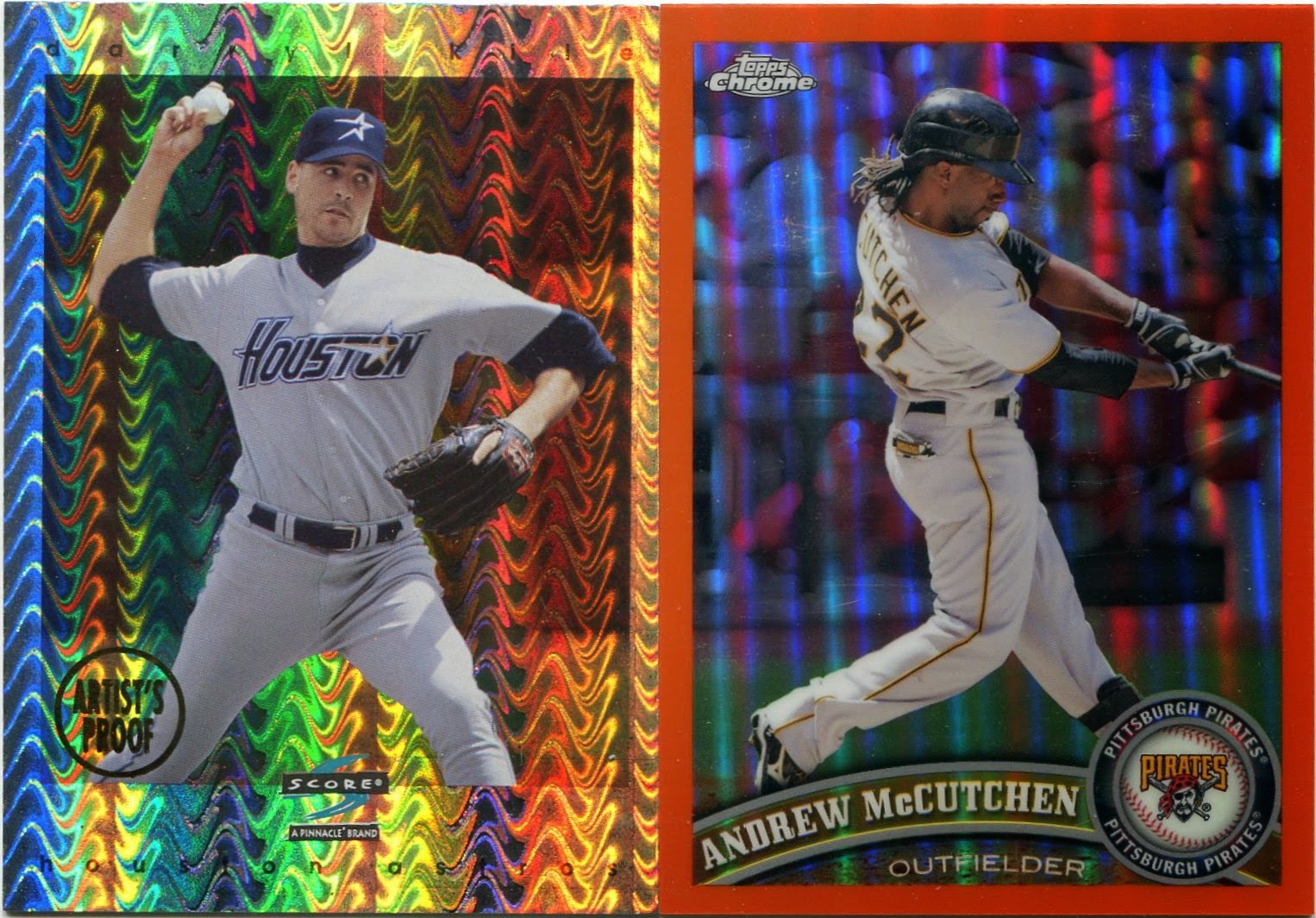 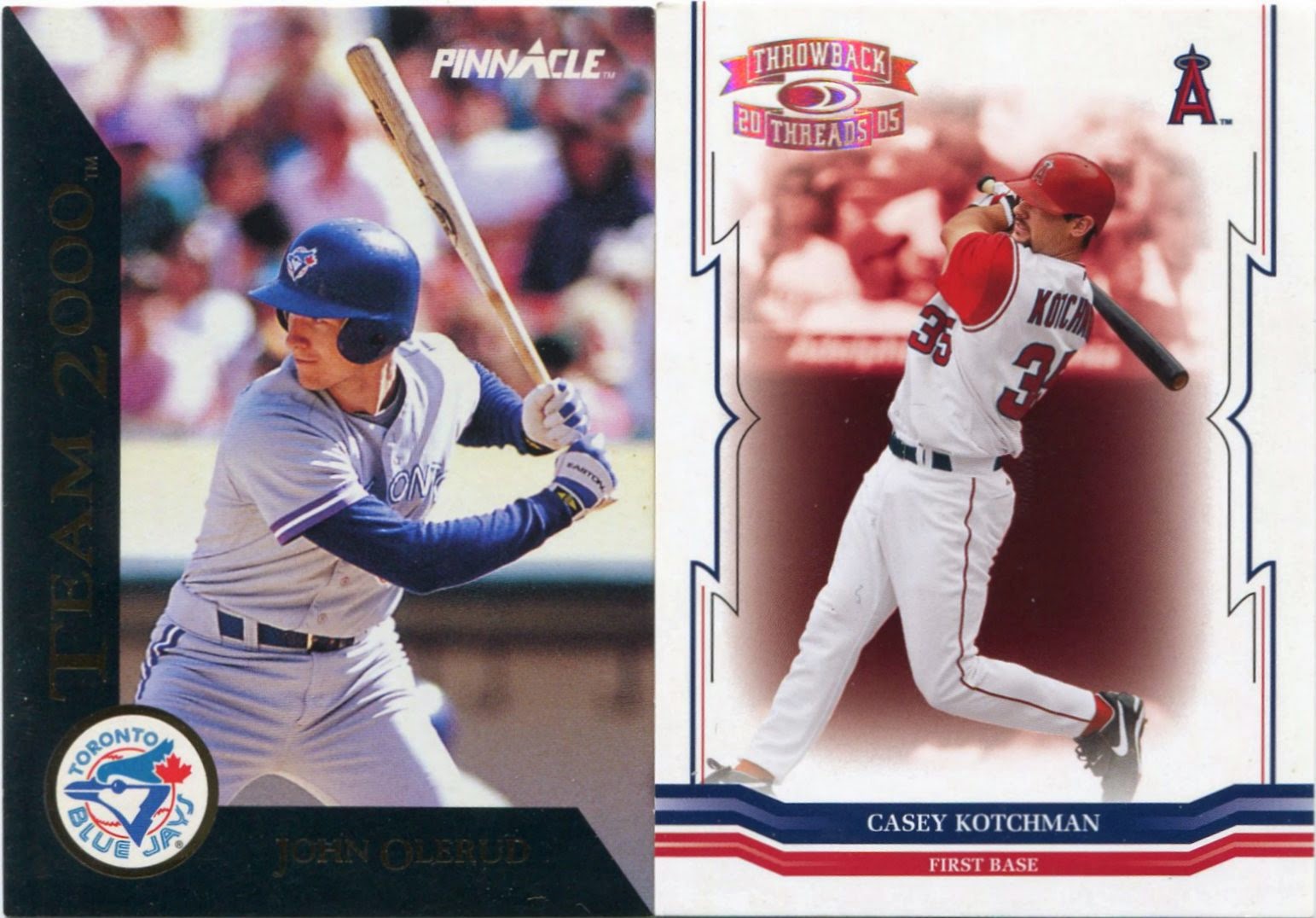 By the time these two new pieces for my John Olerud and Casey Kotchman collections fell out of the box, Jeremy had already gone above and beyond with his efforts.

If I was already so blown away with all the cards I've already shown so far... 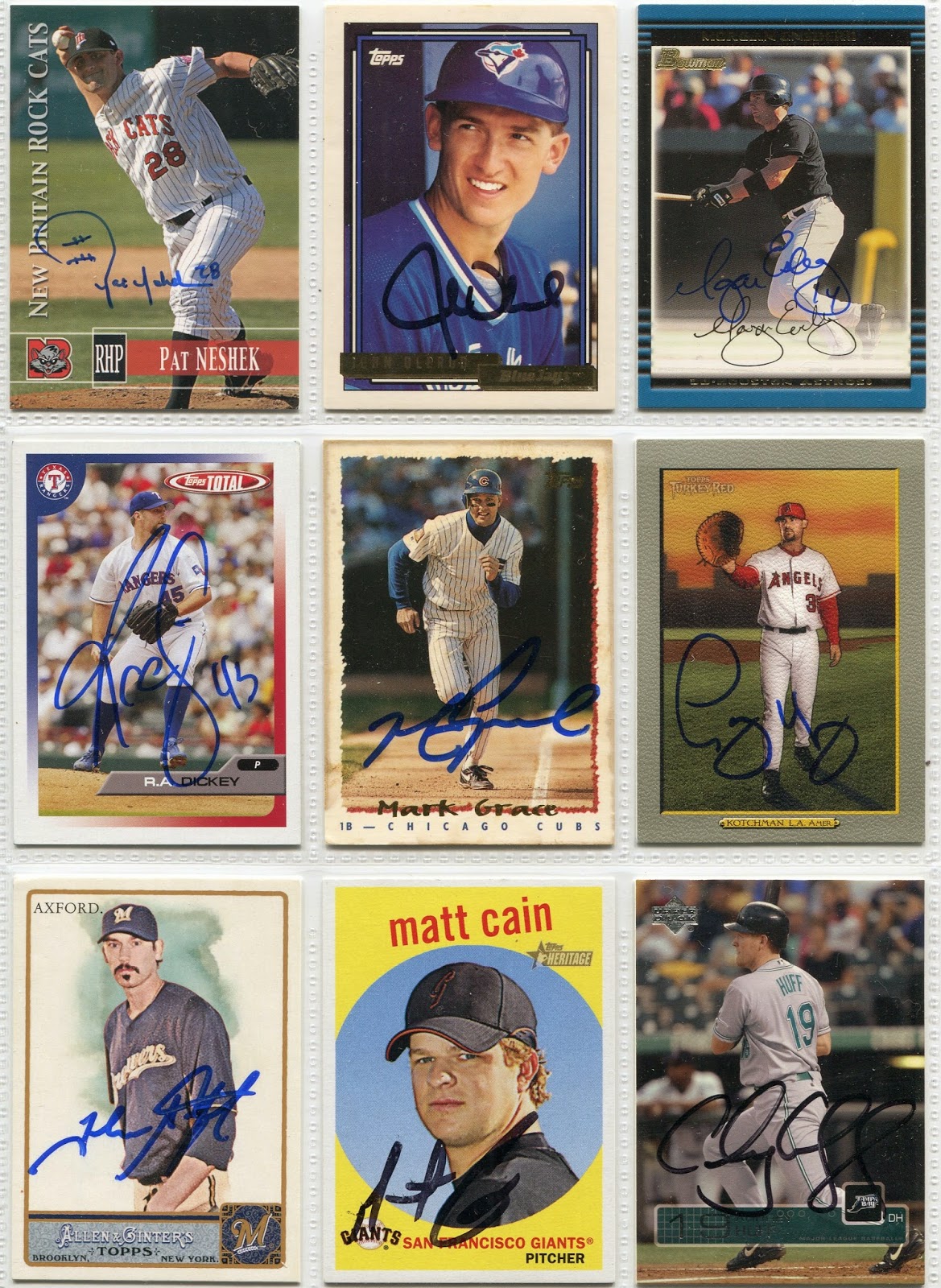 ...you can only imagine my reaction when I laid my eyes on these.

Yes, these are all TTM autographs tailor-made to guys I collect. This was unlike anything I'd ever received in the past.

The Neshek was the third different TTM autograph I'd received within the span of a couple weeks. My mom got a tremendous kick out of the Grace, as it's the first autograph of his in my collection. 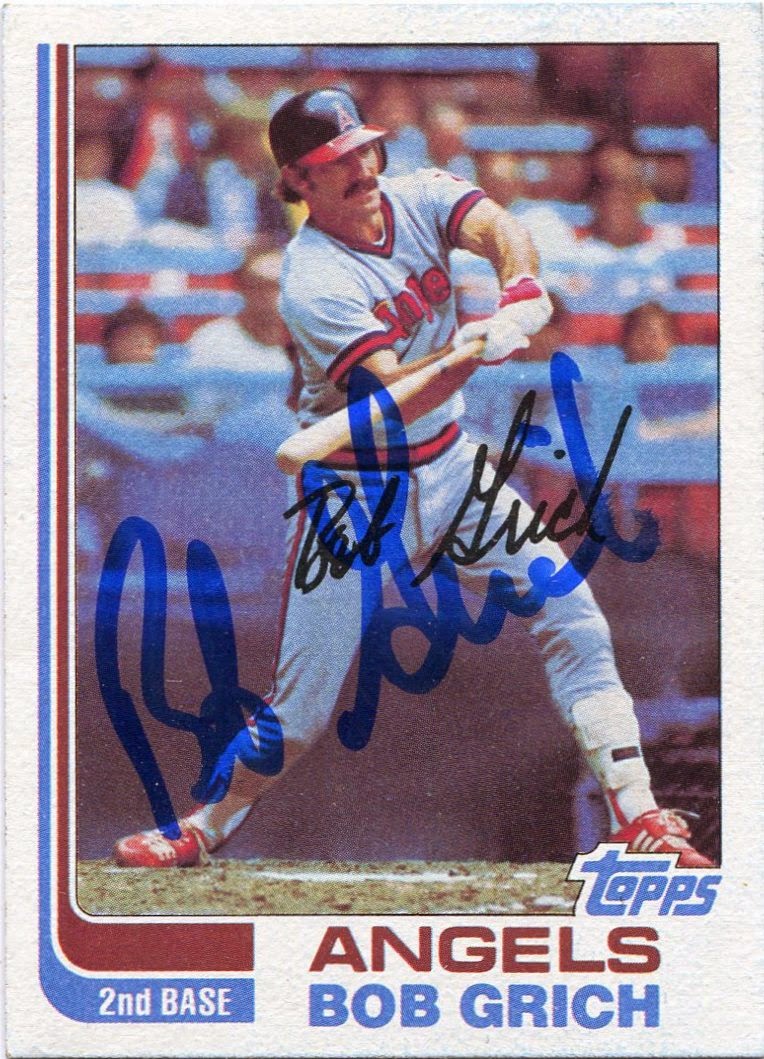 That, my friends, is a freaking Bobby Grich TTM autograph.

It might well be the best Grich card I've found thus far. The fact that Jeremy would think to send such awesome piece to me says wonders about his generosity.

I can't thank him enough. 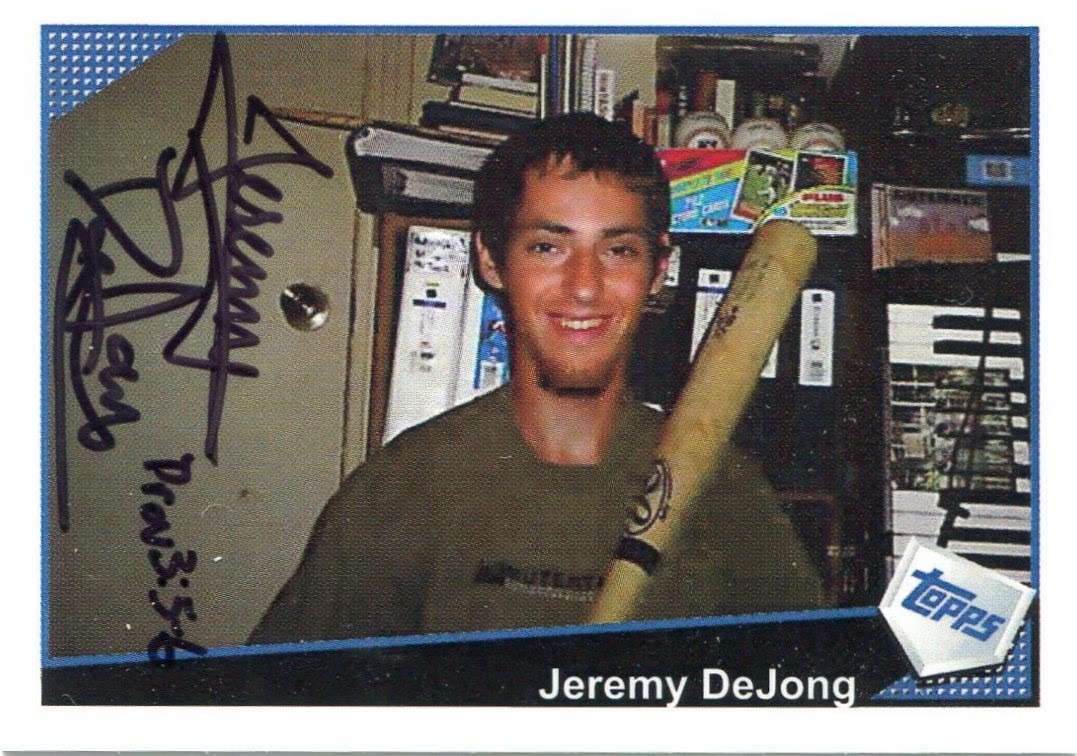 This is the man who made this whole box possible.

Jeremy threw a custom card of himself into this amazing assortment of cards, even personally autographing it for good measure.

Mind-blowing acts of generosity like this are what make the blogosphere such a special place.

After more than two years in the business, I honestly can't imagine my life without it.
Posted by Nick at 3:05 PM

Nick. Great bunch of cards. It's easy to pick cards for you. You seem to have a hundred mini collections

Picked up that Valenzuela a few weeks ago. I was trying to figure out if it's some sort of throwback or alternate uniform since the names and jersey numbers usually have some sort of darker border around the edges. The cap also looked a little different, like the STL logo is missing the white border.