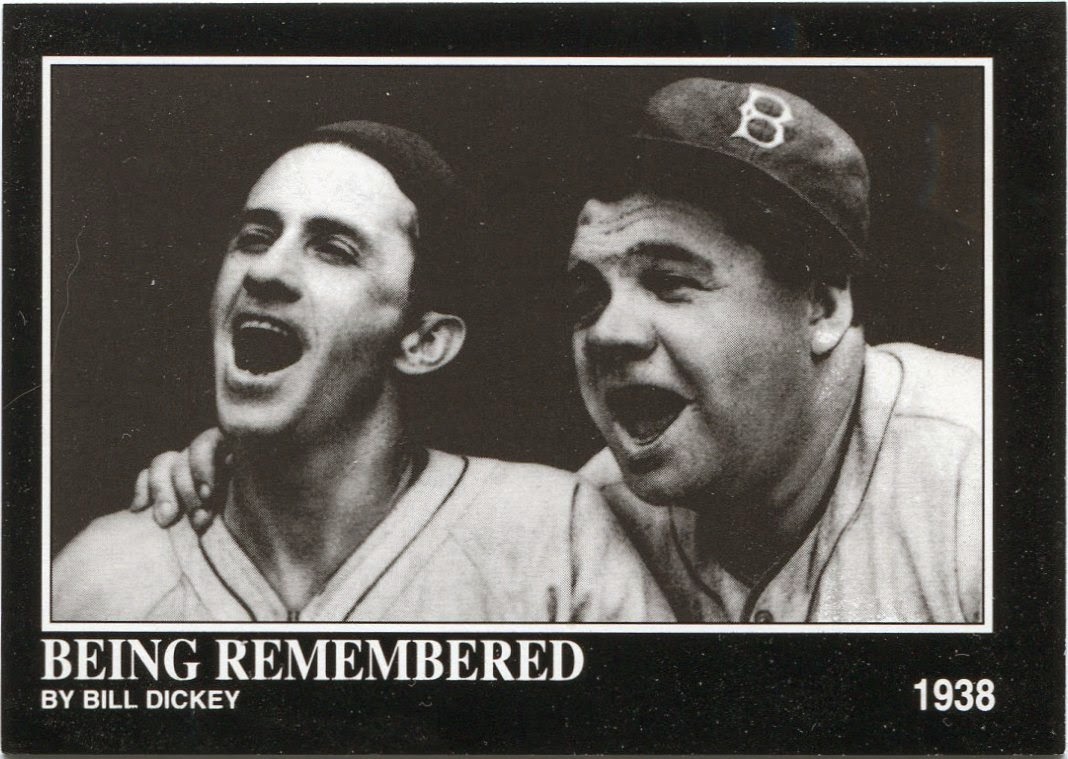 Some older readers of this blog may remember the big "blogger box" craze that swept through Dime Boxedonia a while back.

For no apparent reason, card-stuffed boxes full of glorious cardboard started hitting my doorstep. They came from quite a few generous bloggers around the country. One even made the trip all the way from Australia.

Although it caused me to get way behind in sorting and organizing, that was undoubtedly one of the most awesome points of my blogging career.

Just as soon as it started, though, the blogger box craze seemed to evaporate. Though it did allow me to get caught up with my sorting, I missed it.

Every so often, however, I'm reminded that the mystical blogger box will never truly die. While it doesn't happen nearly as often as before, I still find one of them in my mailbox every so often these days.

Reader Michael recently hit me with not his first, not his second, but his third jam-packed box of awesome cards. He's undoubtedly a blogger box Hall of Famer.

It's great to know that people think of me when they see fun cards like this one of "The Great Bambino". From the all-Ruth 1992 Conlon checklist, this one features "The Babe" having some fun with former outfielder Kiki Cuyler.

It's also one of the few cards you'll see of Ruth during his short stint as a Dodger first base coach. 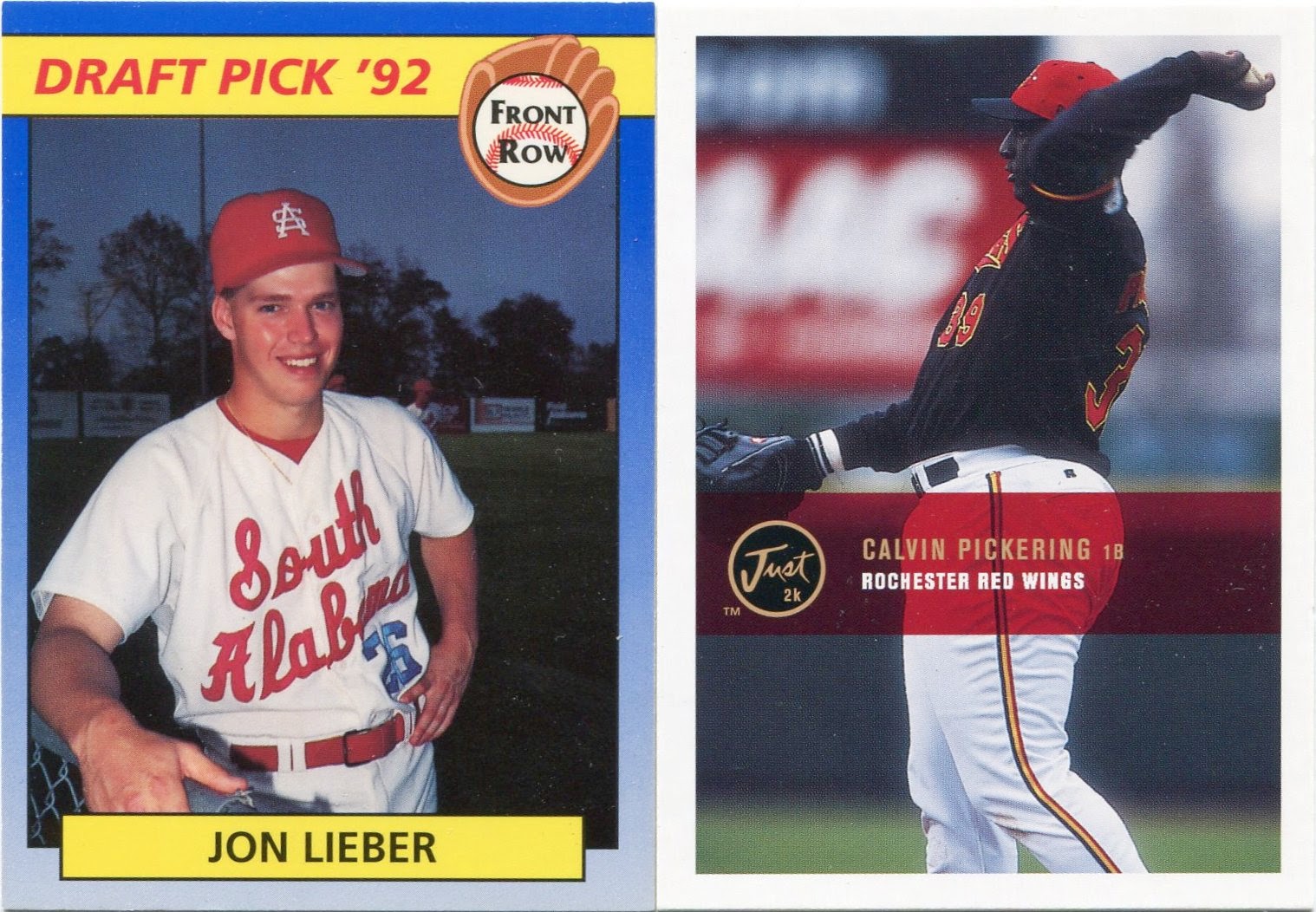 From the stack I found in this blogger box, I could tell that Michael knew about my love for minor league cards.

It's always fun to see future big leaguers during their days playing for peanuts. Plus, I'm sure I'm one of the only Calvin Pickering collectors in the world.

He is one of the few players from the Virgin Islands, after all. 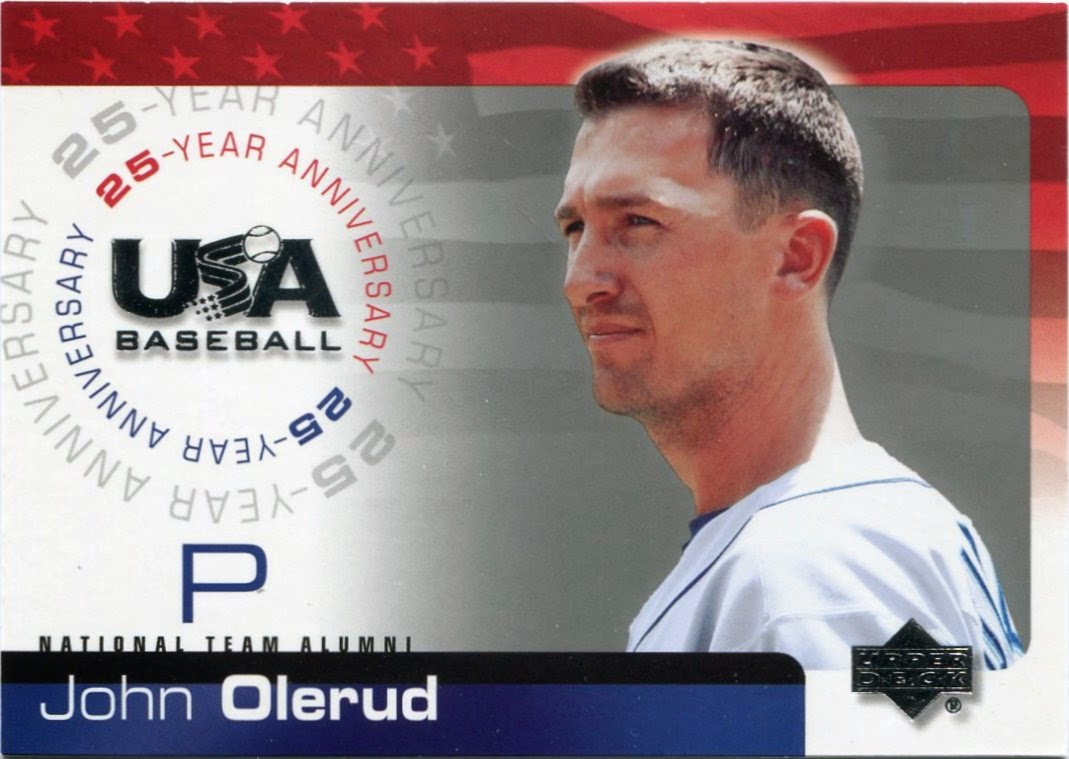 Sure, Calvin Pickering may not be all that well-remembered these days.

But guys like John Olerud should be. Though I don't mention him as much as Vlad or Ichiro, Olerud is probably one of my top five favorite players to collect.

I honestly didn't know Olerud ever played for the US National Team. 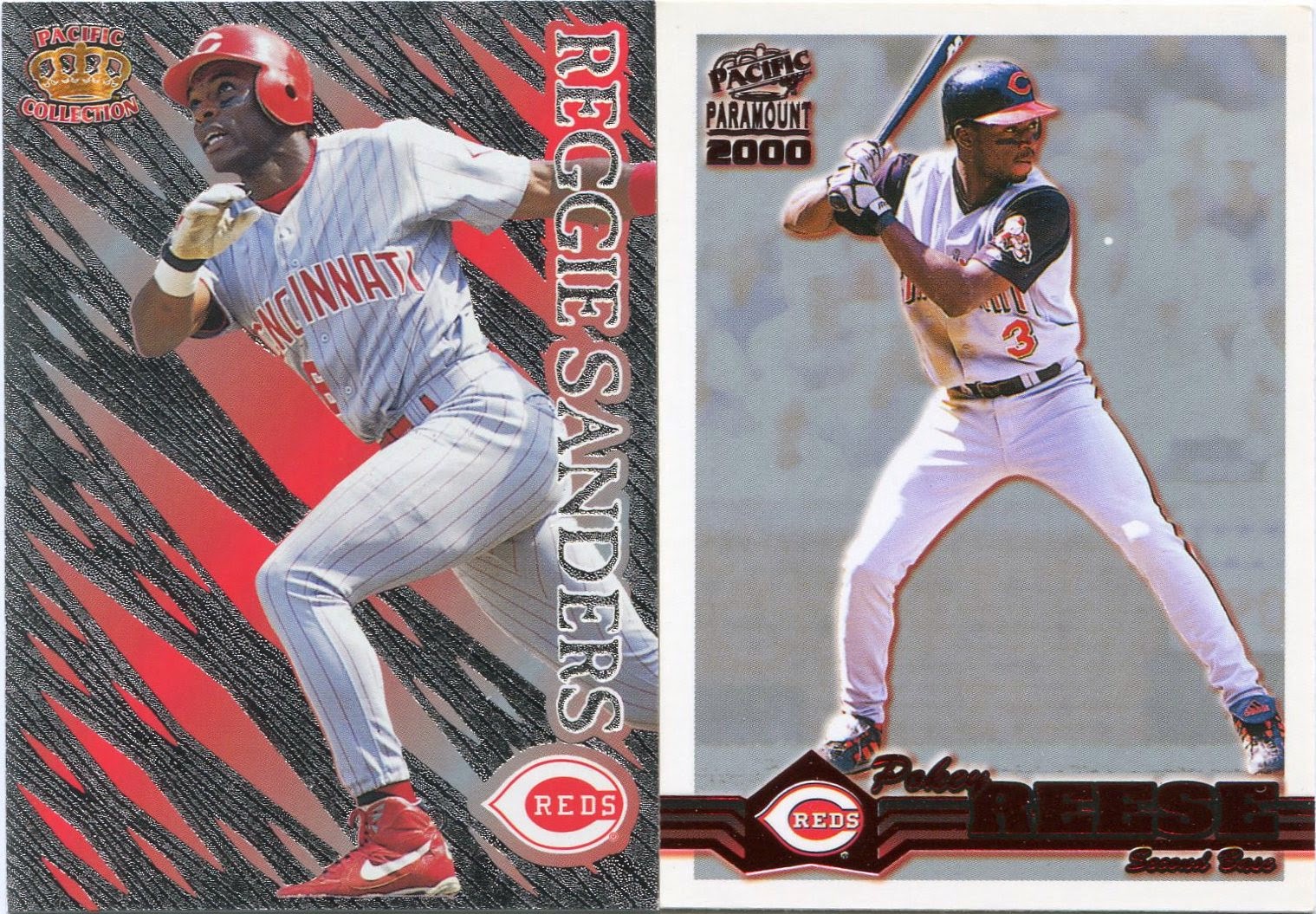 You can never go wrong with Pacific.

The Pacific brand never really struck a chord with most collectors, but I've always been a big fan. More than perhaps any other company in cardboard history, they sure weren't afraid to take risks.

The pair you see above are probably two of the more tame releases in Pacific's catalog, which is saying something.

One of my dreams is to find a box of heavily-discounted '90s Pacific at a card show someday.

Now that would be a blast. 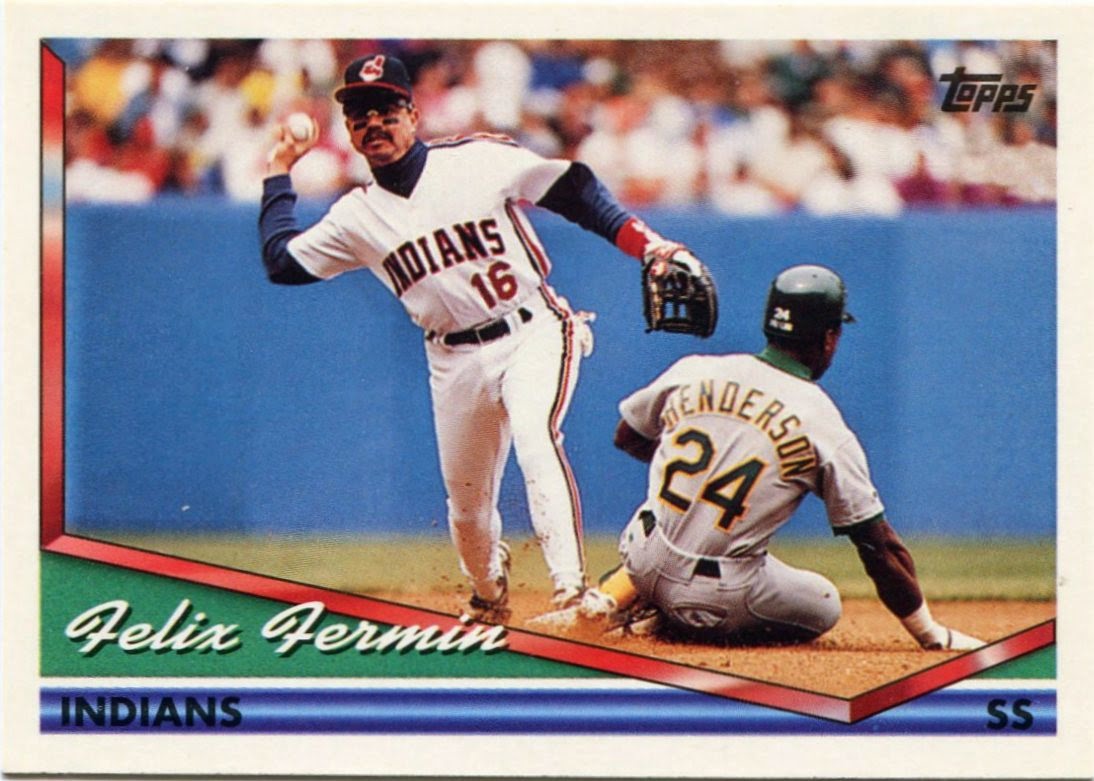 As any blogger box is bound to include, Michael sprinkled some mini-collection madness into this one.

Horizontal double dips are even better.

Horizontal double dips with a Rickey Henderson cameo are about as good as it gets. 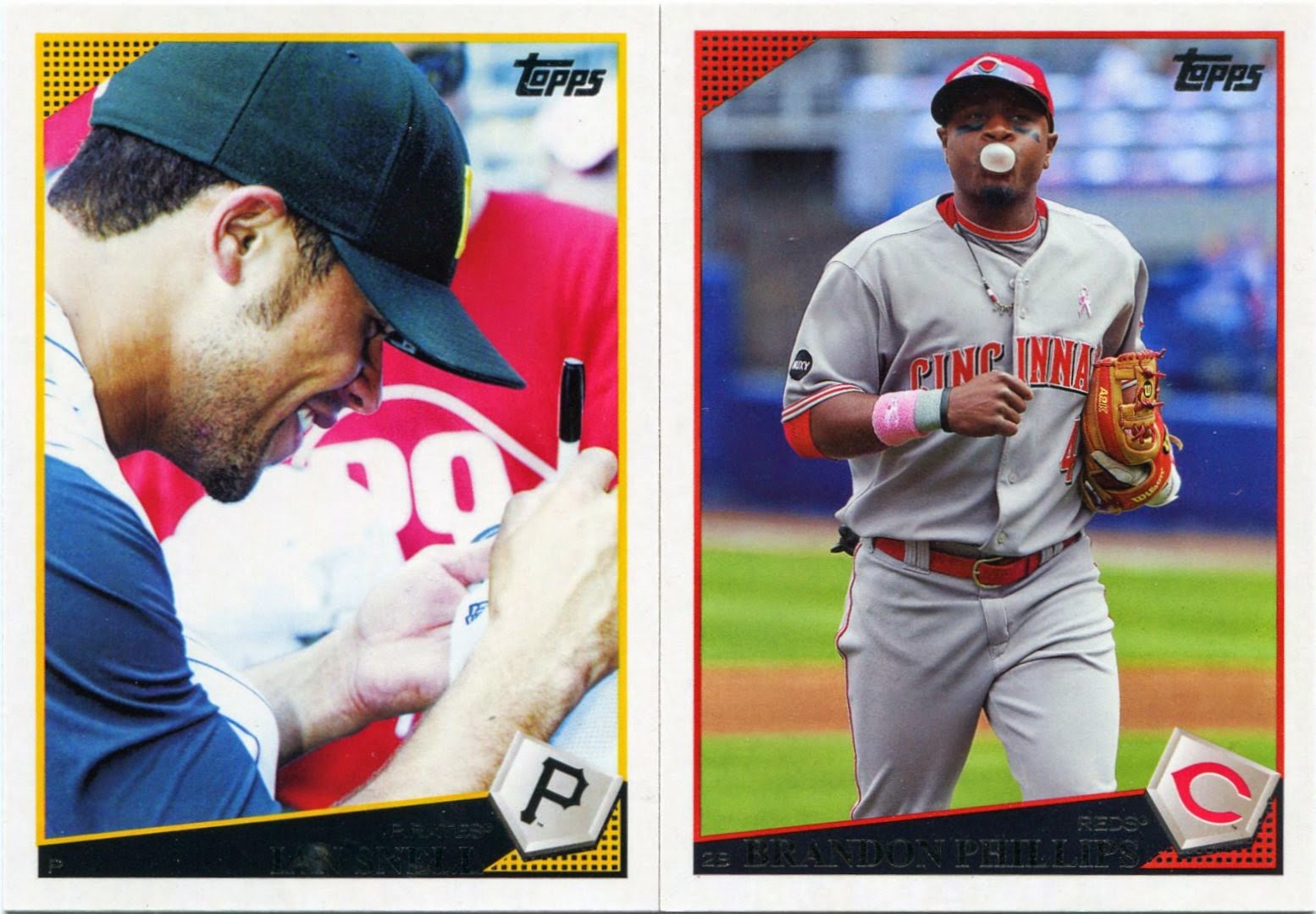 Like the bunting shots, I've never officially declared "bubble blowing" as an official mini-collection of mine. I guess now is as good a time as any to finally say it. 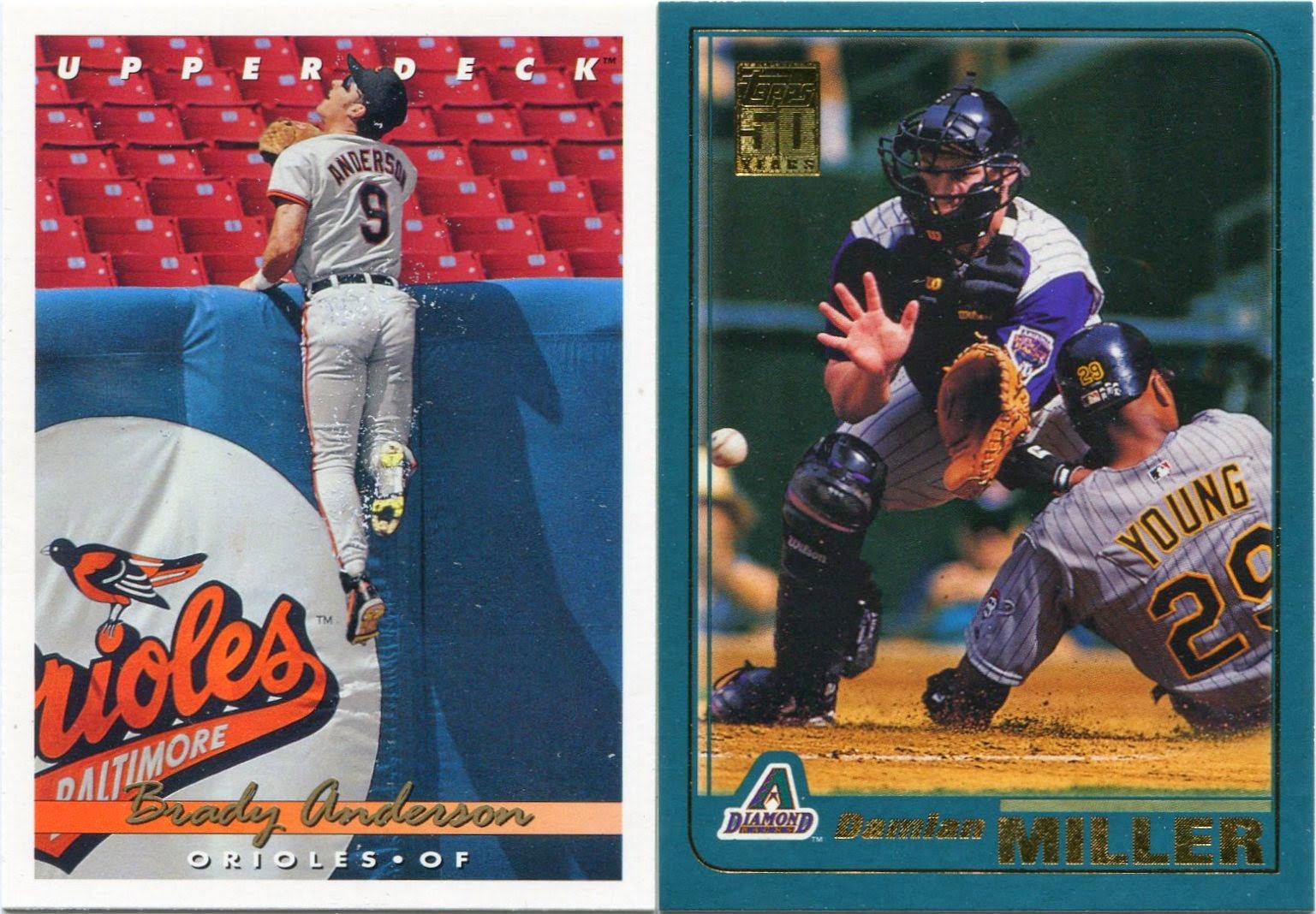 Here's a couple from the "at the wall" and "play at the plate" variety.

I'd be willing to bet that 1993 Upper Deck has more mini-collection hits than any other set in history.

I seem to find new ones with each passing day. 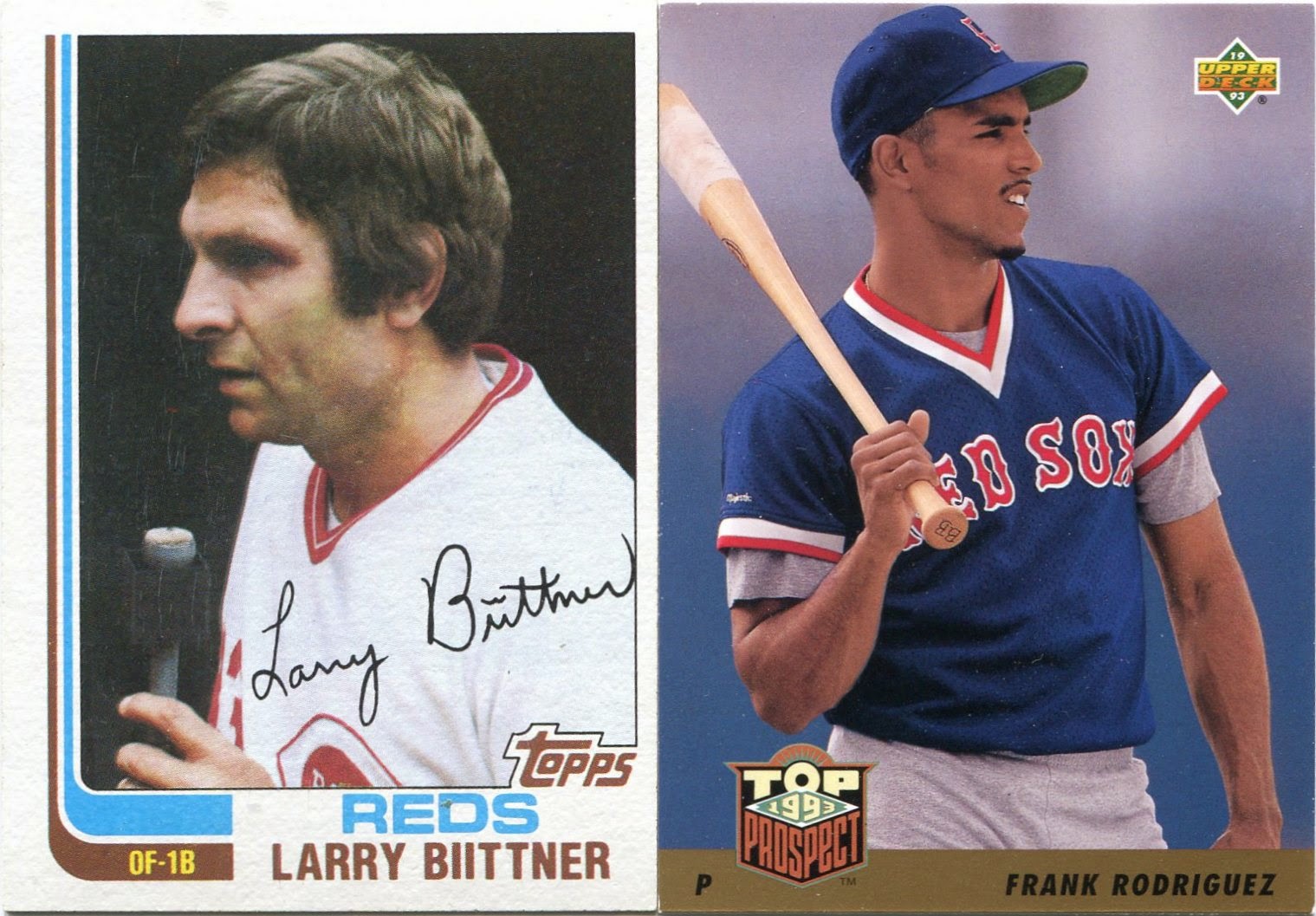 If memory serves me right, I have yet to find a pre-1982 "interview" shot. 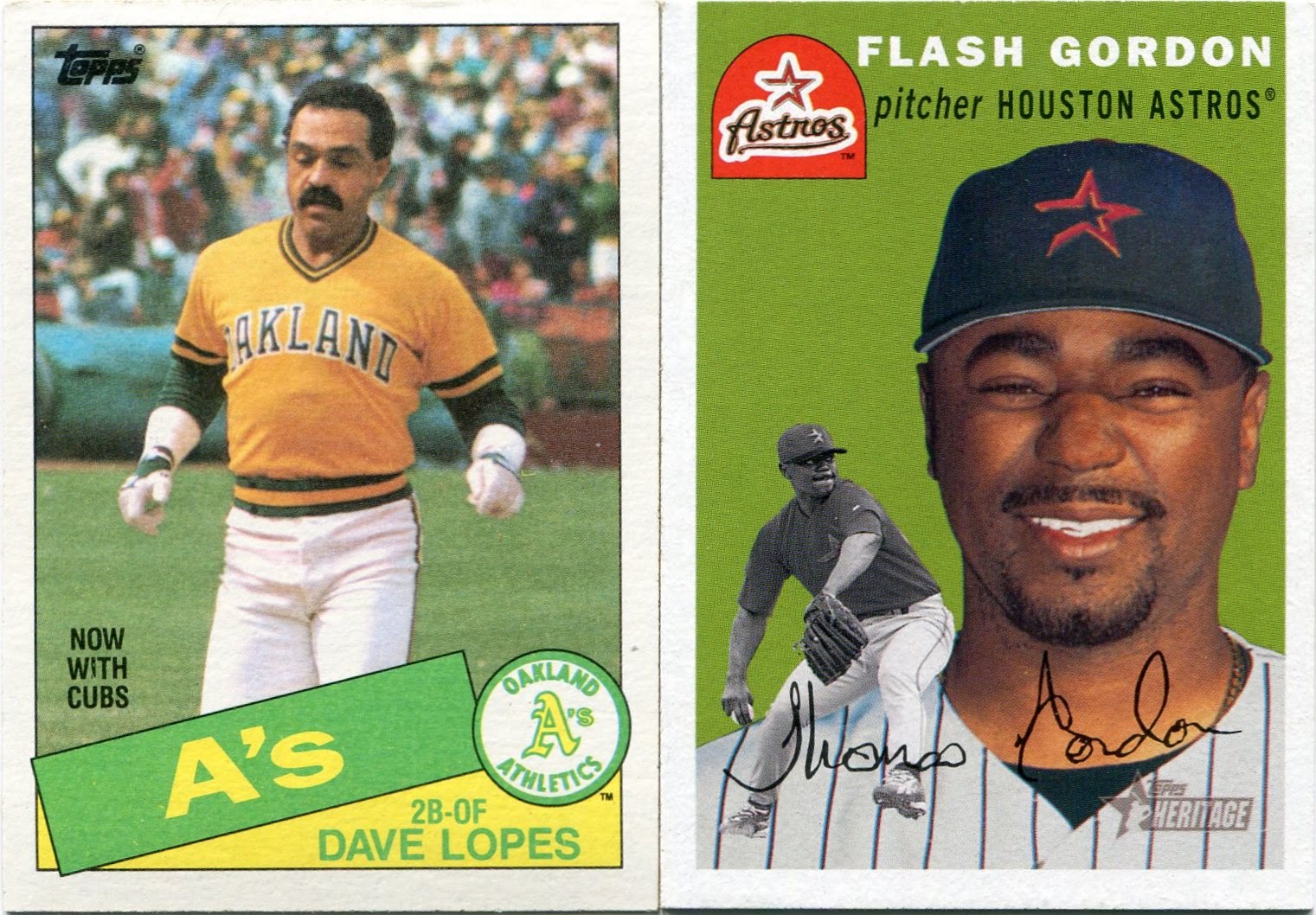 As if this blogger box couldn't get any better, Michael decided to throw a couple "Dime Box Dozen" nominees into the mix.

The Lopes had been a huge need of mine ever since my man Ethan sent me the OPC variation of it not too long ago. Now that both versions are in my collection, I can live happily ever after.

I've known about the existence of the '03 Heritage Gordon for a few years now, but didn't get around to making it a "Dime Box Dozen" need until recently.

Besides the fact that it awesomely lists his first name as "Flash", it's the only card I know of that features him as an Astro. He spent all of 15 games in Houston in 2002.

One of these days, I'll have to go back and see how many "Dime Box Dozen" needs I've speared so far.

With the help of great people like Michael, I know it's quite a few. 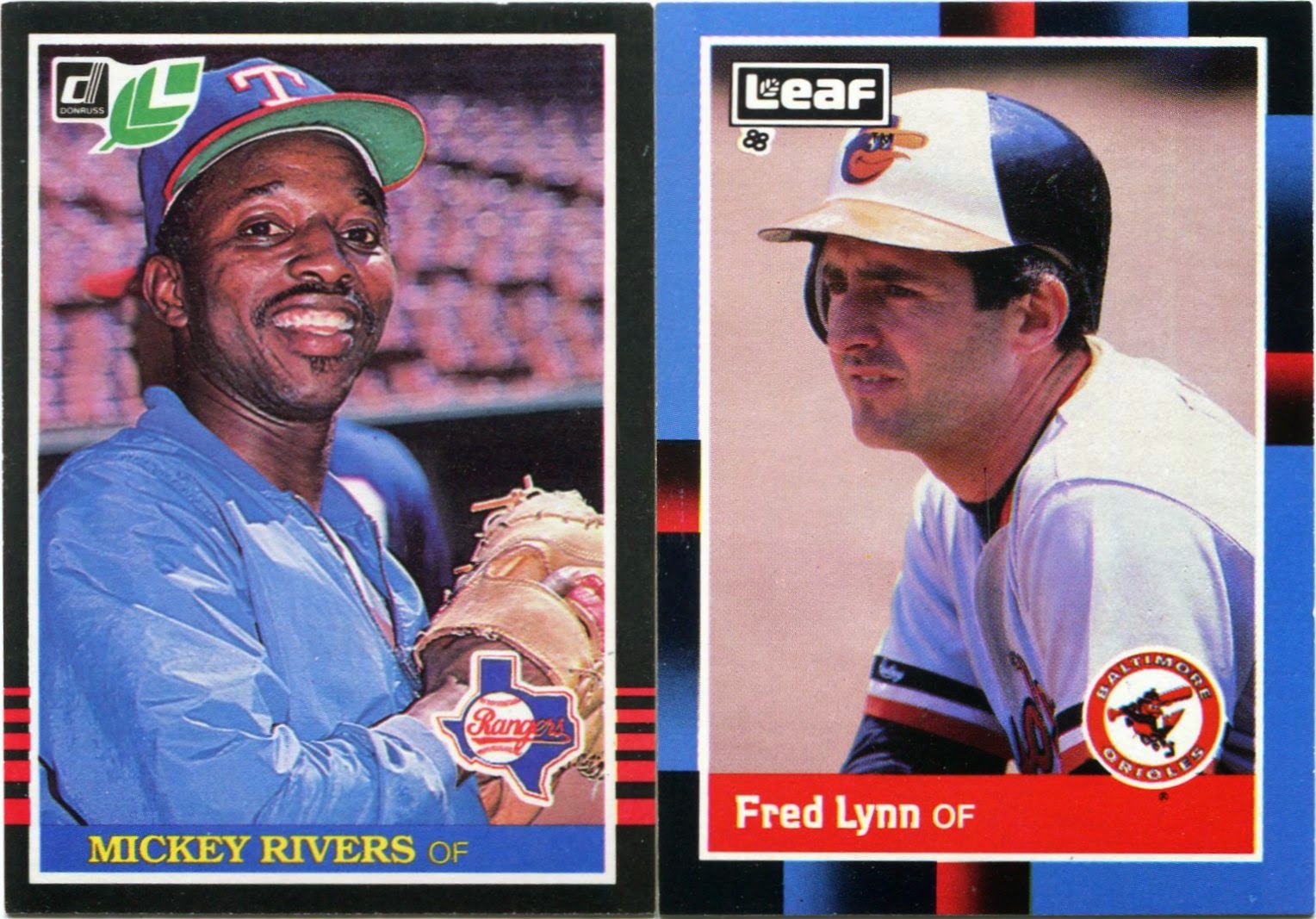 Michael also picked up on an interest of mine that I haven't mentioned too much on this blog.

Leaf branched out into its own brand in 1990. What we sometimes forget, however, is that it basically served as an OPC version of Donruss before that.

Just like O-Pee-Chee, '80s Leaf was released in Canada and have French on the backs. On top of that, they look awesome next to their Donruss counterparts in a binder.

I'm still on the fence about whether I consider them oddballs or not. 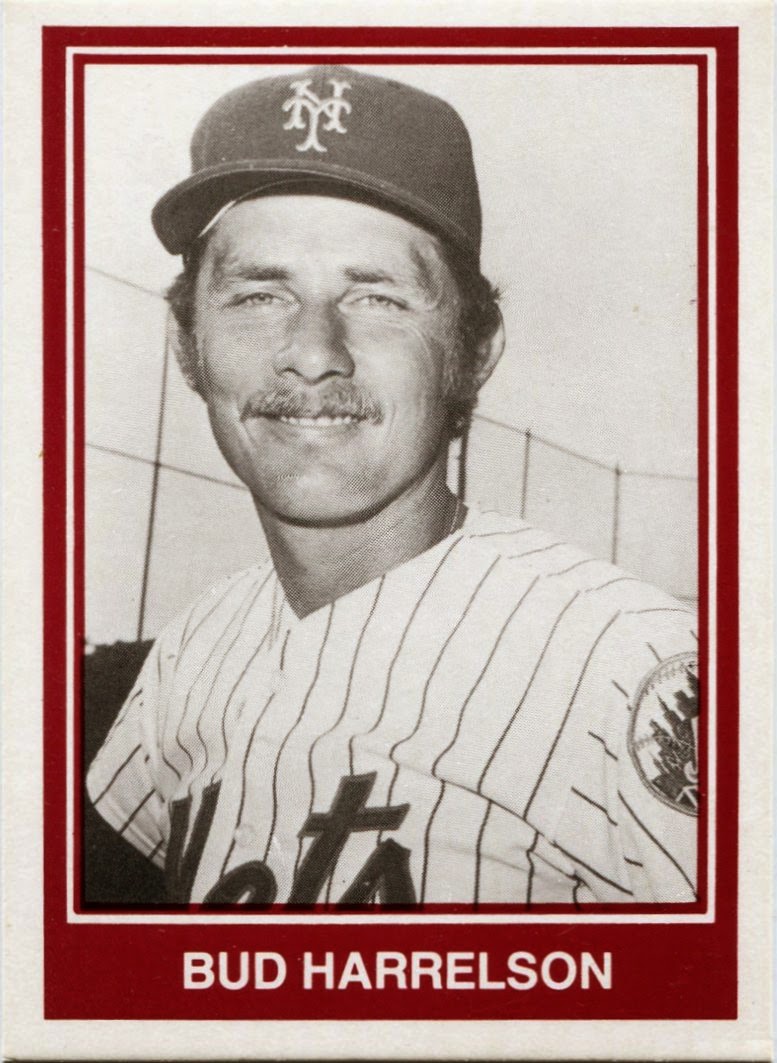 There's no denying the oddity of this one, though.

I've long been a big Bud Harrelson fan. Like many baseball fans, I first learned about him through his infamous brawl with Pete Rose in the 1973 NLCS.

However, I eventually learned that he was a terrific shortstop a vital part of those great Mets teams of the late '60s and early '70s. Plus, at 5'11" and 160 pounds, Harrelson and I are about the same size, which boggles my mind.

This would've been a neat oddball regardless.

But for what I really liked about it, though, we have to flip it over. 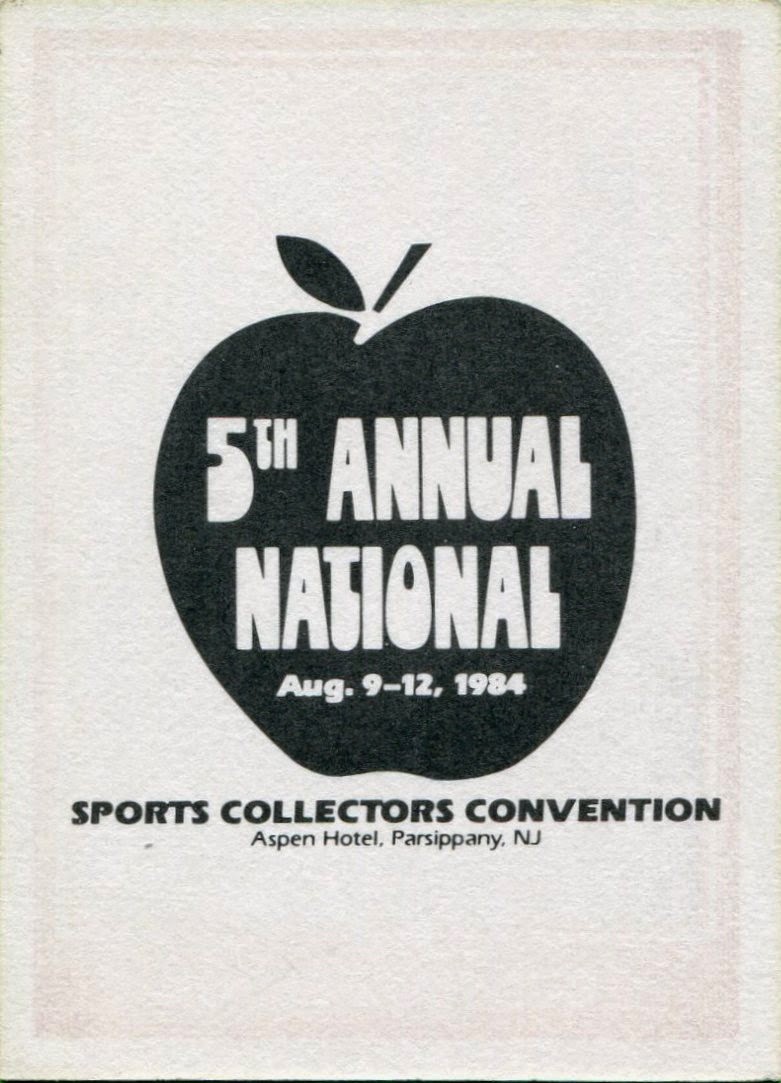 I knew the big show had its origins in the late '70s and early '80s, but I had no idea there were any sort of giveaways back then. I'd always assumed that was a more recent thing.

Apparently, though, some lucky collectors got their hands on this terrific card back in 1984. Now, thirty years later, it has a home in my collection.

How cool is that?

I can't thank people like Michael enough for keeping the blogger box thing going. It's been a pleasure to dig through all the hand-picked cardboard people have sent me during my time here in the blogosphere.

You just never know what the blogger box gods will have in store.
Posted by Nick at 6:38 PM

I learned more French from O-Pee-Chee and Leaf cards than I did in class.

Not really. But "lanceur" is far more important to me than "Le style est sur la table"

Last year I got a Larry Doby with a different design on the front, but the same apple deal on the back, which I think was from the 4th National (or somesuch). Nice oddballz.

Are you keeping those Conlon Ruths together, or keeping a want/needs list for completing that set? I've got a few more extras i can hook you up with.

I don't think I've ever seen Olerud without his helmet

I see a couple that would hit my minis too.