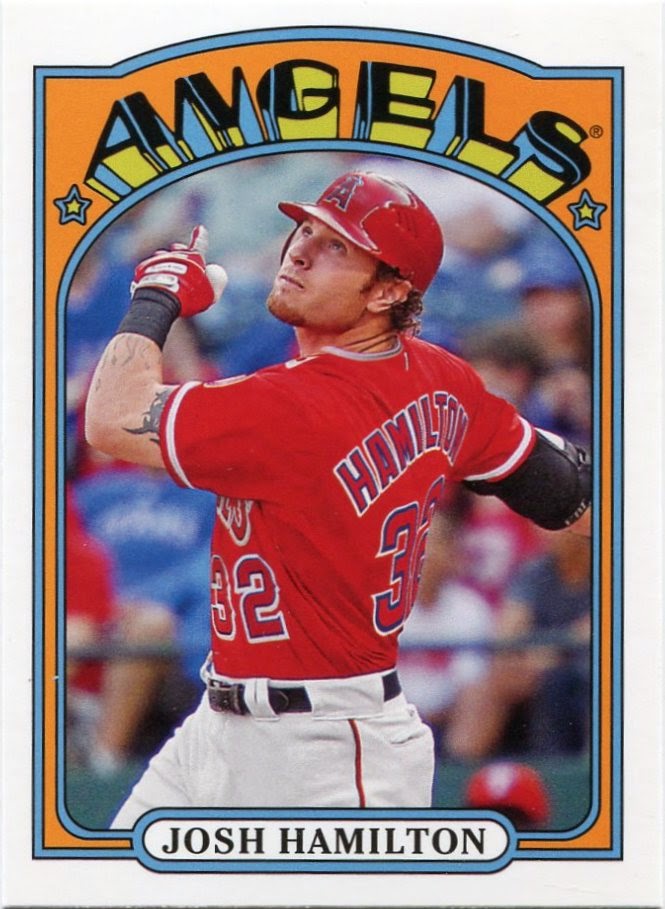 The random gods have long had a hold on me.

When it comes to baseball cards, there's a certain beauty in collecting everything from Hall of Famers to pitchers at the plate. That sense of random is part of what has kept me in the hobby for all these years.

And, while it might sound like an oxymoron, I've done my best to organize my randomness. I can tell you where any card in my collection is at this exact moment. I know some of you might picture my room as something out of one of those "hoarder" TV shows, but it's not like that at all.

Part of what keeps me sane is the "set needs" tab on the side of this blog. One ironic part of that is the fact that I'm not a set builder. Nope, those are actually all just random cards disguised as formal needs.

When a new set comes out, I go through the checklist and mark down every base and insert I need from it for my many player collections. That's what you see on my want list after all is said and done.

Thankfully, a lot of fellow collectors have helped me hit some of my faux-set needs lately. It makes taking the time to make all those want lists worth it.

While he hasn't blogged in a while, it's good to see that Paul of "The Baseball Card Snob" is still in the trading market. He did a noticeably unsnobbish deed by taking the time to dig for a few of my needs.

If you haven't figured it out by now, minis are always welcome here in Dime Boxedonia. 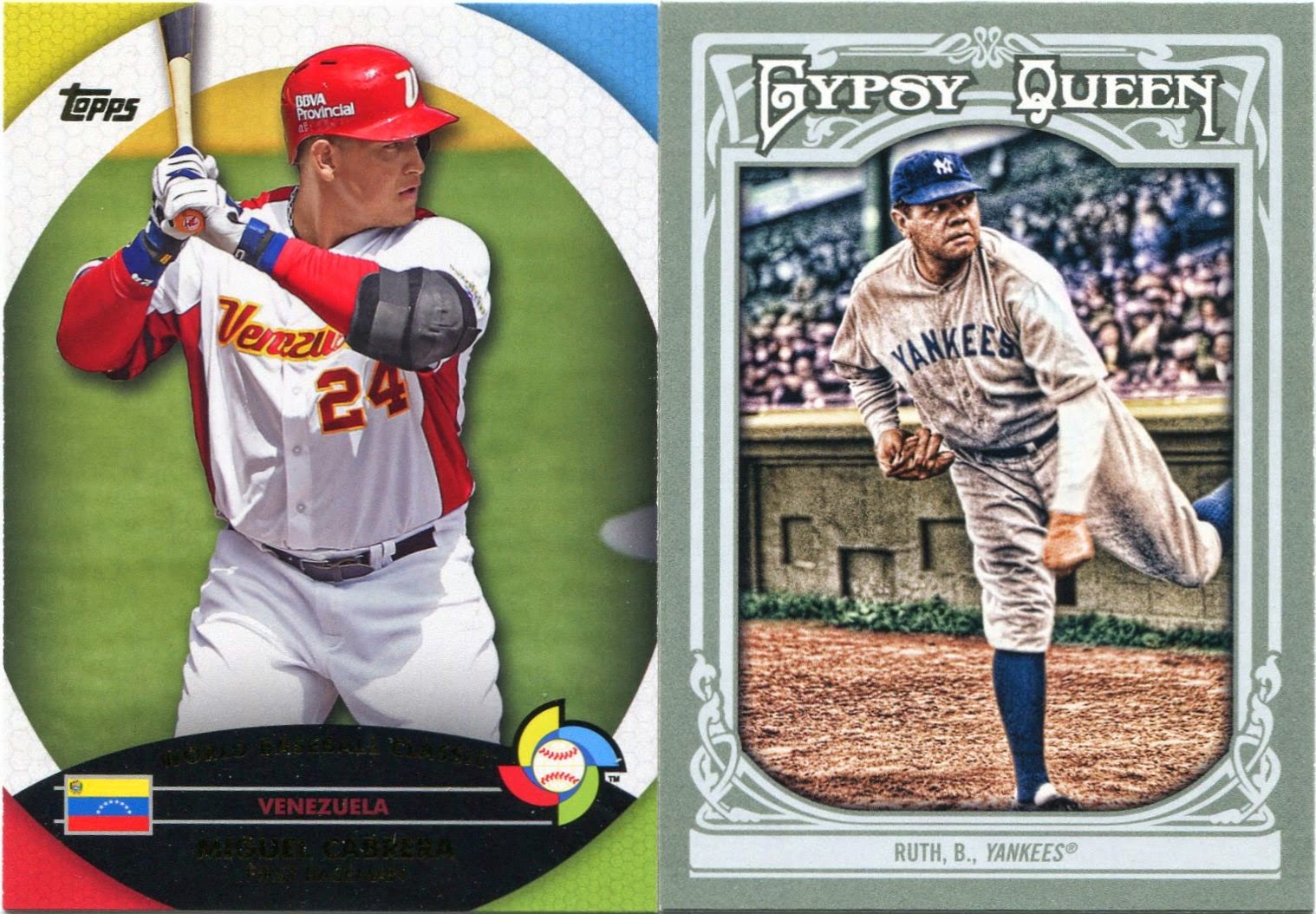 Paul knocked off a couple huge names with these two. 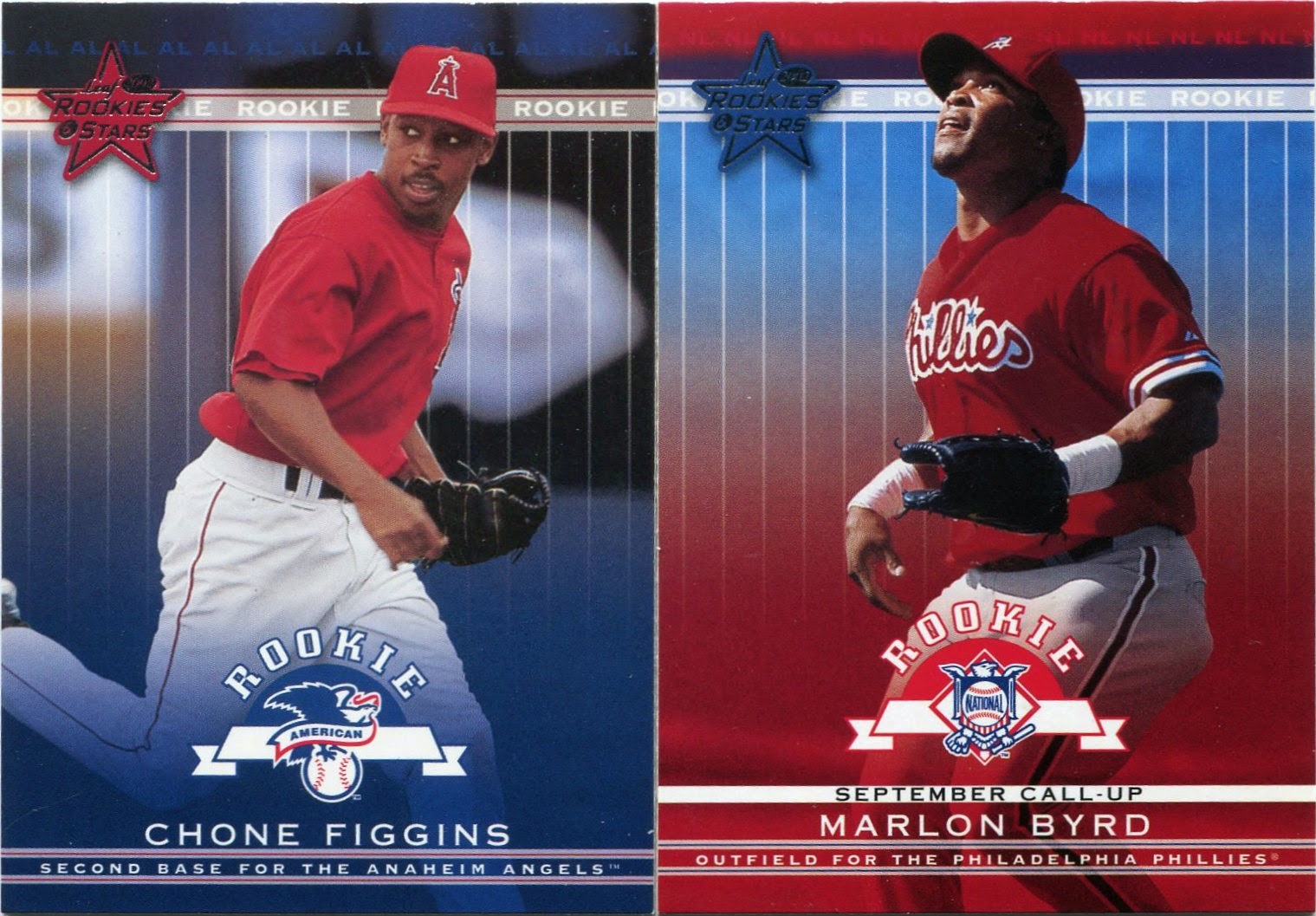 He even took a trip in the way back machine by hitting a few of my 2002 Leaf Rookies and Stars needs.

I'm not sure why I created a want list for this specific set in the first place, but I'll certainly take any people have lying around.

Though these may only be twelve years old, the sight of guys like Chone Figgins and Marlon Byrd as rookies makes this set feel ancient. 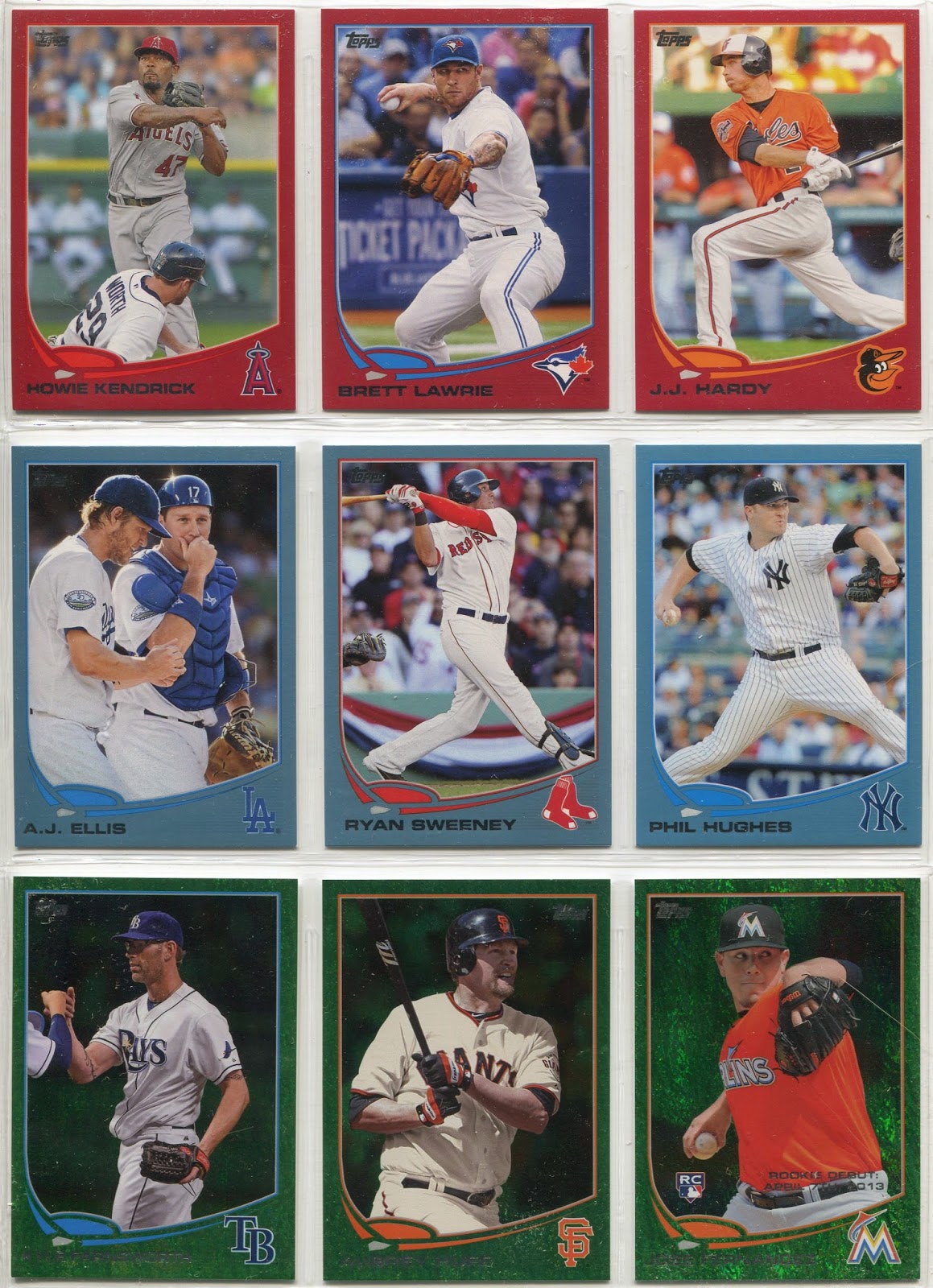 My parallel want lists are a bit less formal.

I'd drive myself absolutely crazy if I tried to chisel out specific needs for the million different variations in Flagship these days.

Instead, my want list says "I need a lot of these, let me know which ones you have" or something like that.

If people have lists of extra parallels they'd like to unload, I'm more than happy to take a look and pick out ones I need.

That's exactly what happened during a recent trade with Tom of the terrific blog "The Angels, In Order".

I felt like a kid in a very colorful candy store digging through his spare 2013 parallels. 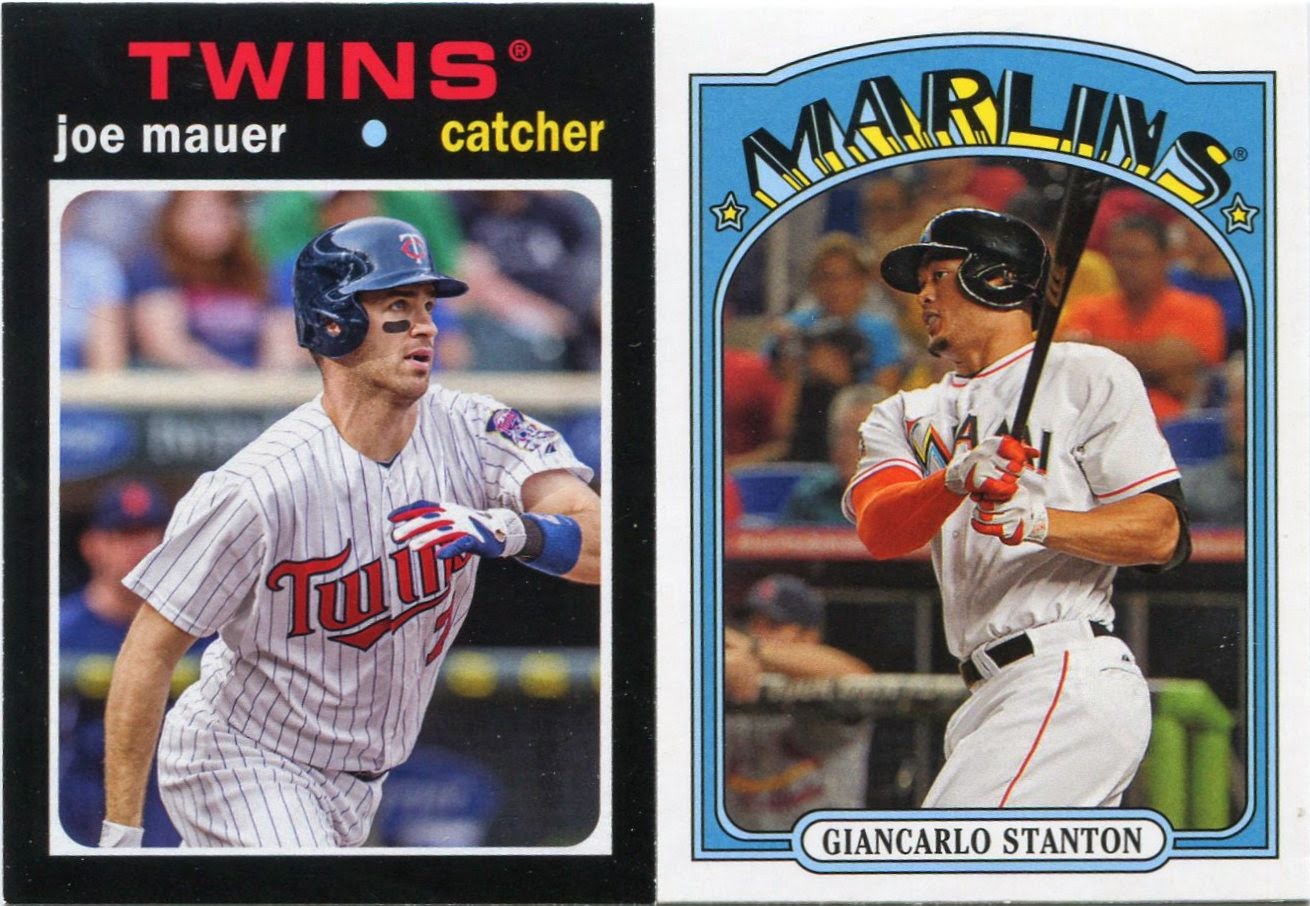 As if that weren't enough, he threw a couple minis into the mix as well.

I guess it's just a coincidence that both of these guys are on my fantasy team this year. 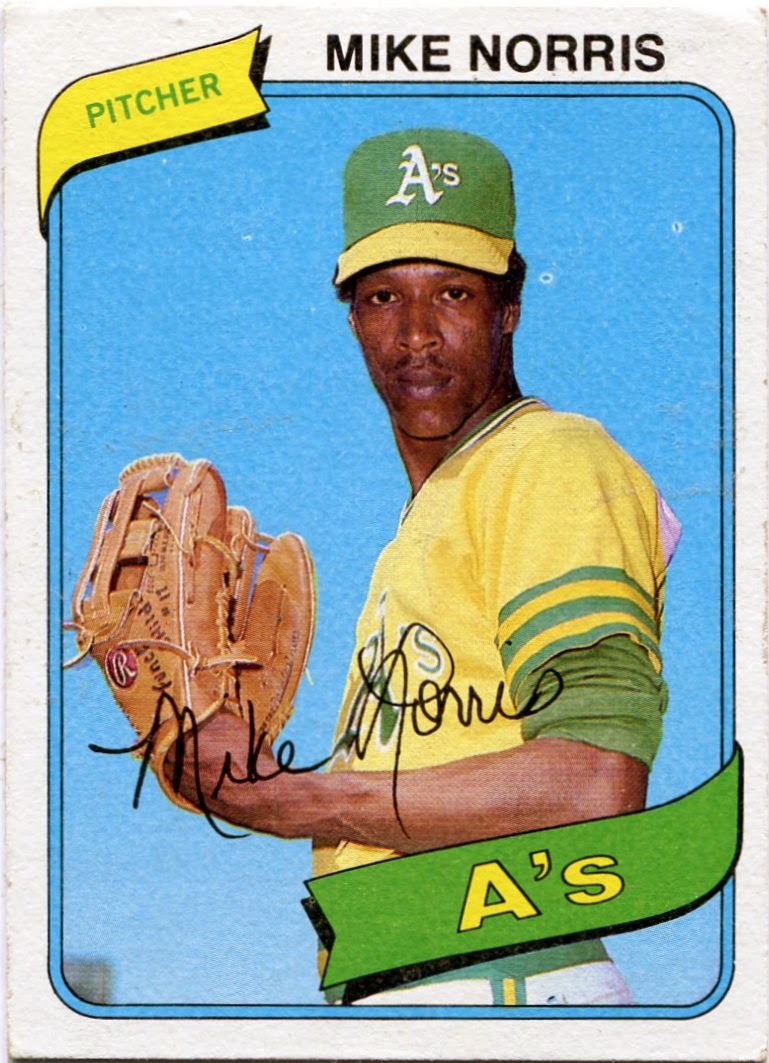 My "Dime Box Dozen" list is probably my most recent method of organized randomness.

If I stumble upon a cool card that I don't already have during an internet search or a blog post, I go ahead and add place it under future "Dime Box Dozen" consideration.

The fact that I had a Fan Favorites Mike Norris card that featured the 1980 design but not an actual '80 Topps Mike Norris drove me nuts. Hence, its appearance on my want list.

Thanks to Tom, this card's "Dime Box Dozen" tenure was short-lived.

I can sleep a little easier now. 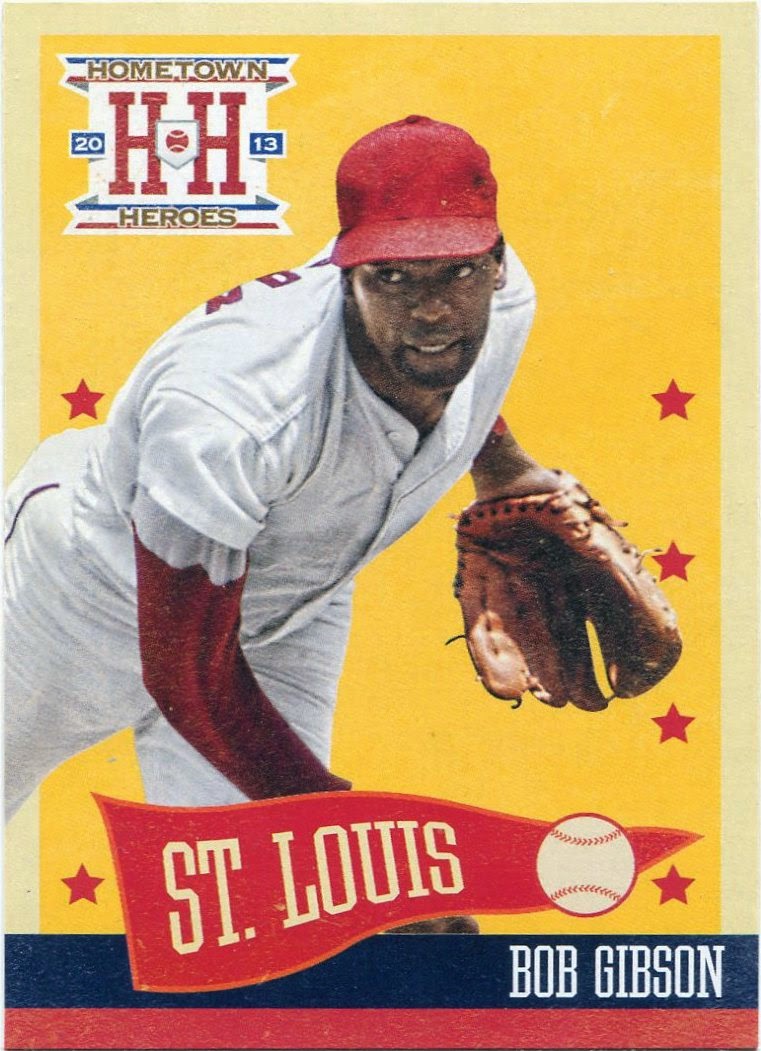 Panini has had a stronger and stronger presence in my collection these last couple years, which means they've been popping up on my want lists more and more as a result.

If they keep producing great cards like this Bob Gibson, Panini will always have a special place in my binders. 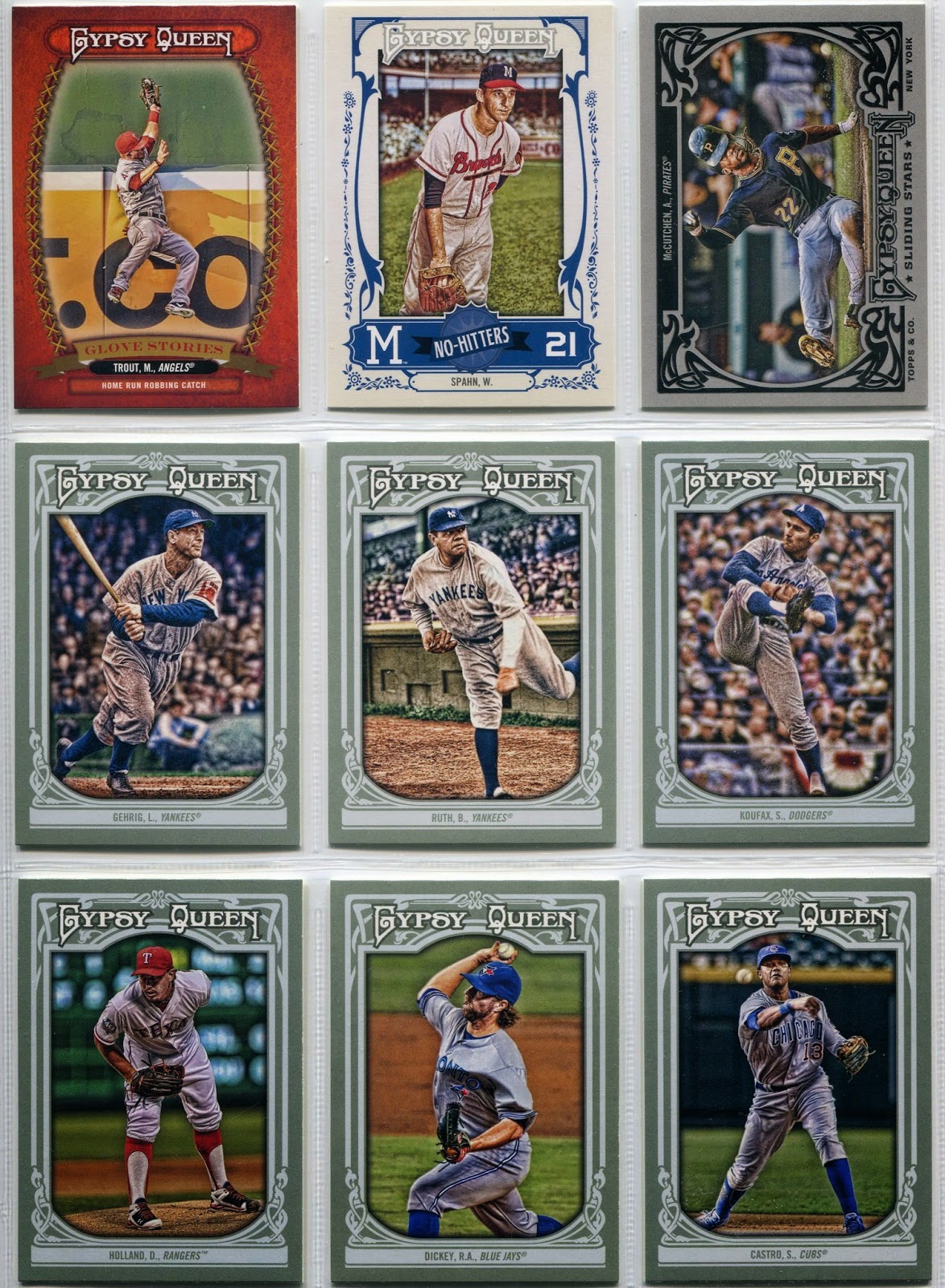 The real story of Patrick's package, however, was Gypsy Queen.

Sometimes, people do such a great job of hitting needs that they overlap each other. The GQ Babe Ruth in the center of this page arrived just days after Paul's copy.

Having two different people knock out the same wants is one of the prime "first world problems" of collecting. 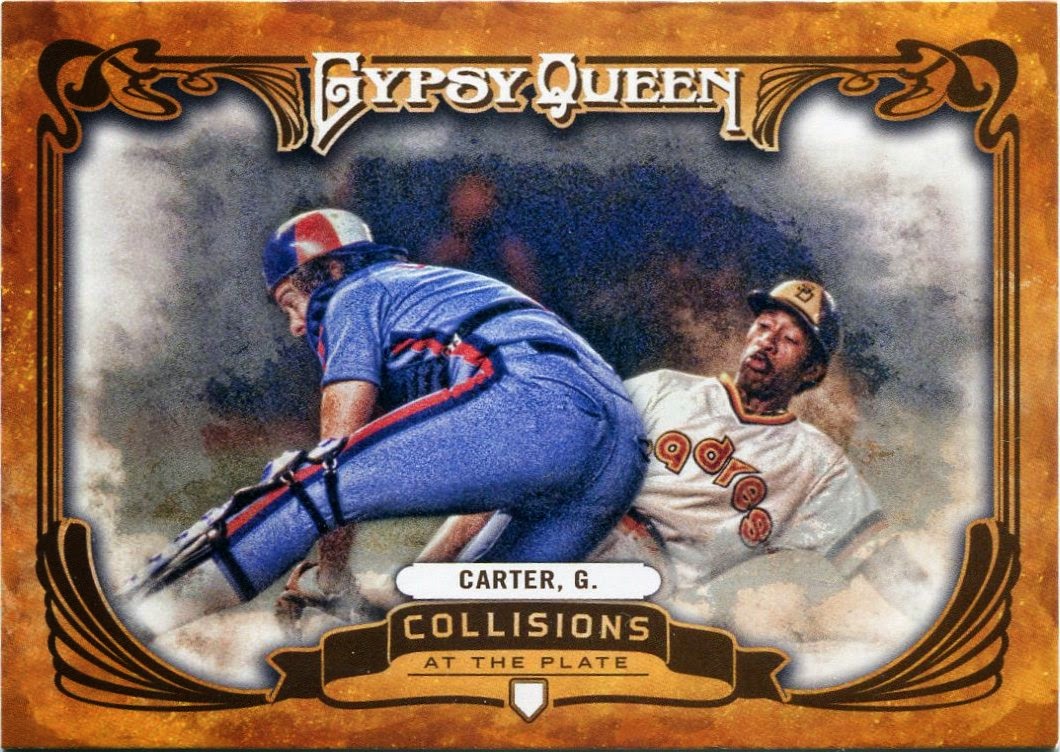 Gypsy Queen may not know how to make a decent base card, but it's obvious they know their way around inserts.

This terrific "Collisions at the Plate" piece of Mr. Carter has to be one of 2013's better cards.

Plus, you've got to love the Ozzie Smith cameo. 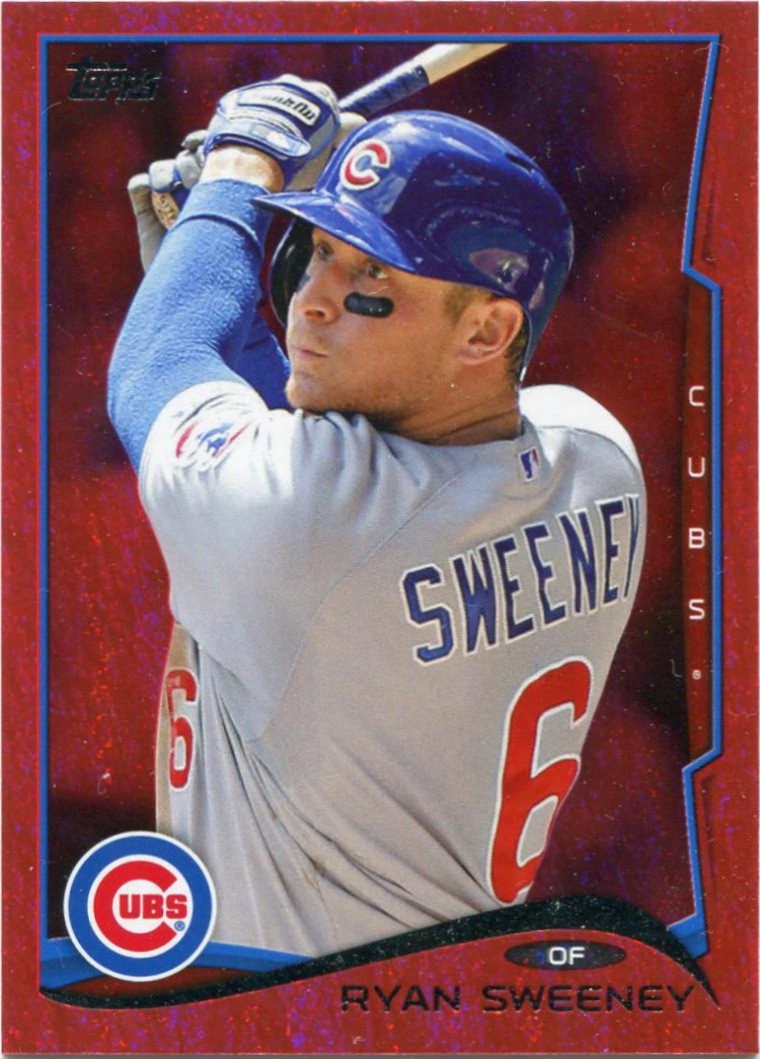 Last up in the organized randomness bandwagon is a package I received from blogging aficionado Robert from the fantastic "$30 A Week Habit".

In a break from my usual tactic of lying low, I specifically requested this "blood rain" Ryan Sweeney parallel from Robert when he featured it on his blog.

It's Sweeney's only card as a Cub to date, and I want as many different variations of it as I can find. 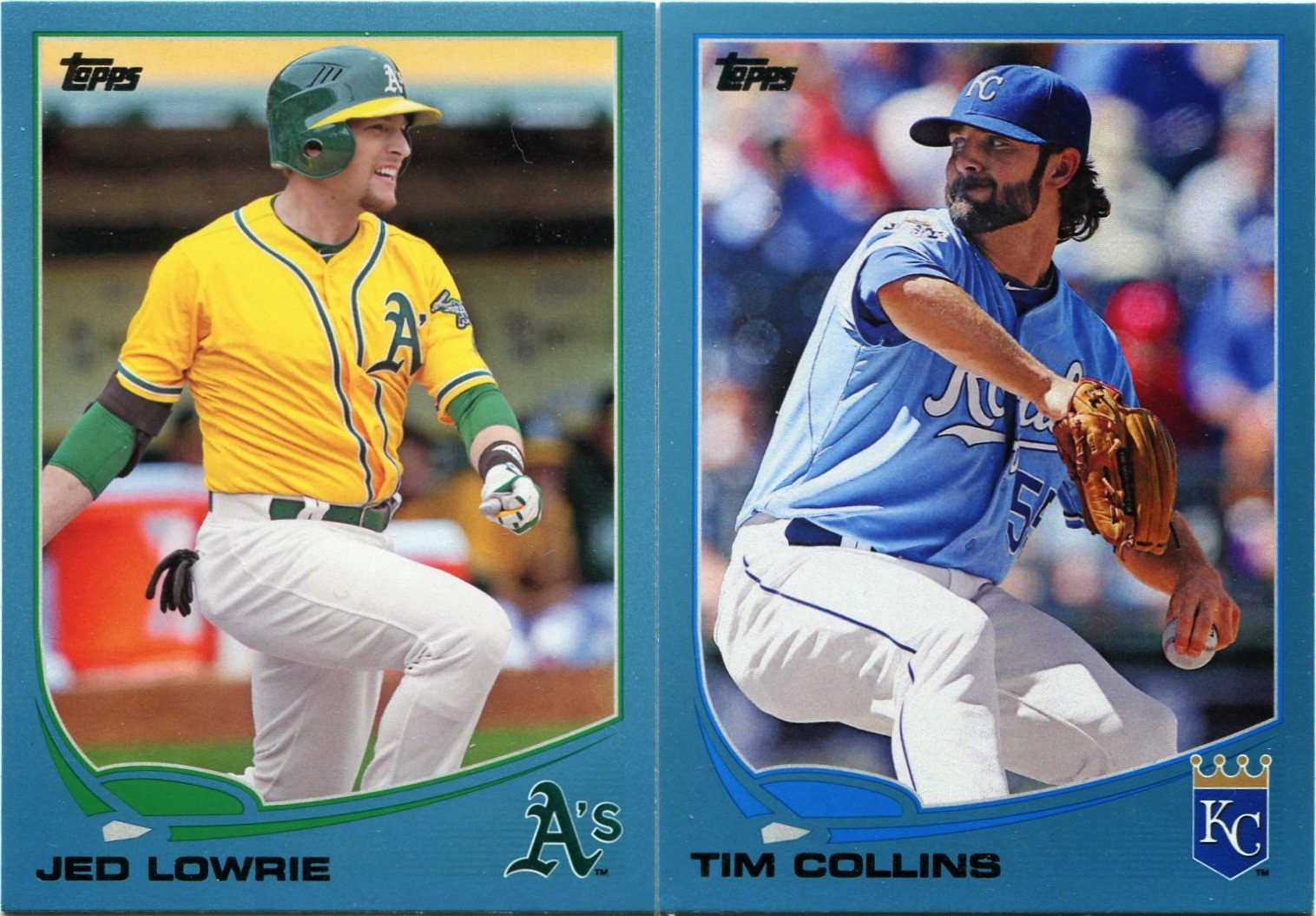 Though the Sweeney would've been enough, Robert also graciously let me pick through a list of extra Wal-Mart Blue parallels he had left over from 2013.

I almost never step foot into Wal-Mart, but it's always nice to pick these up from those that do. 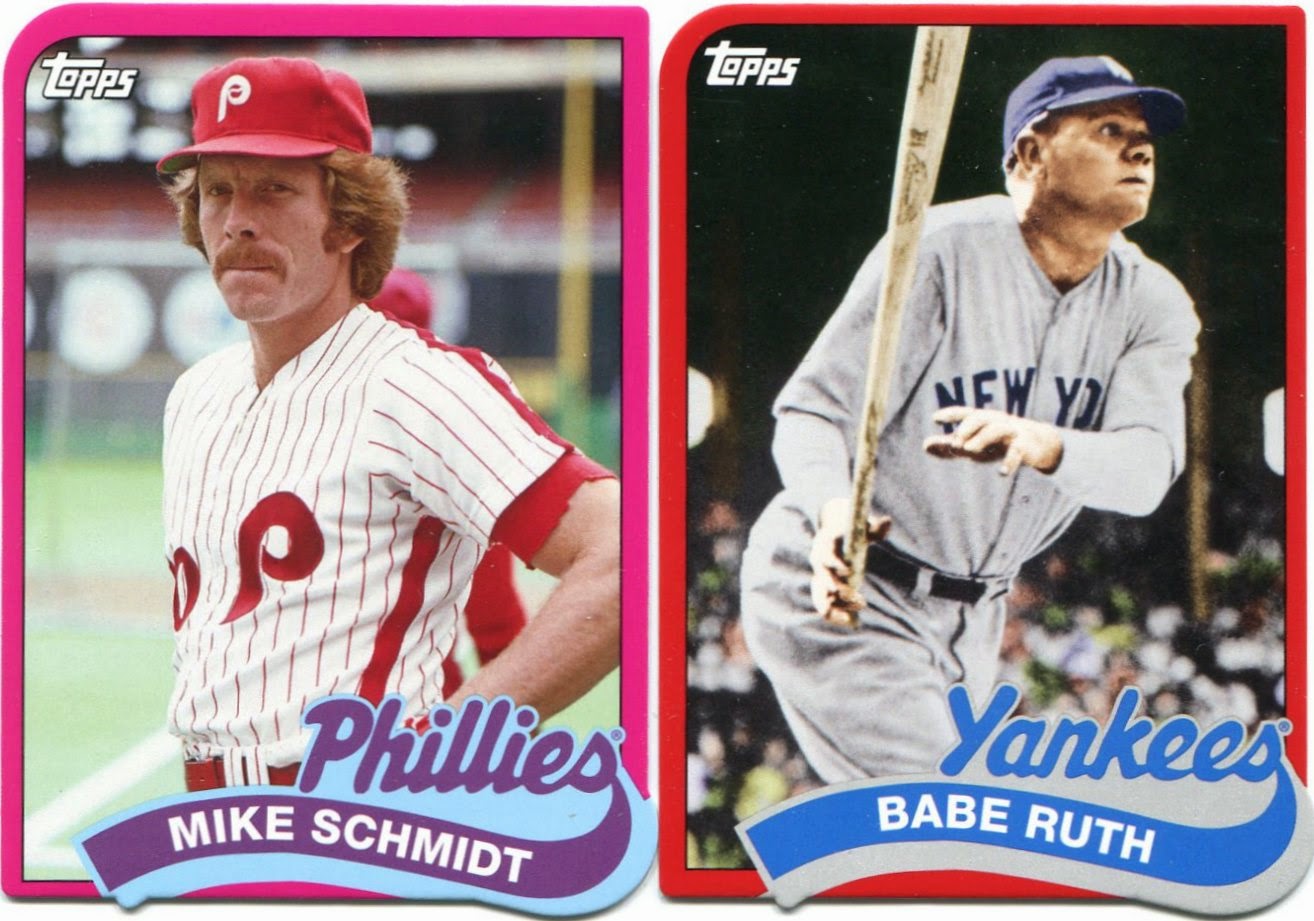 Robert continued the mini bonanza with these two legends. 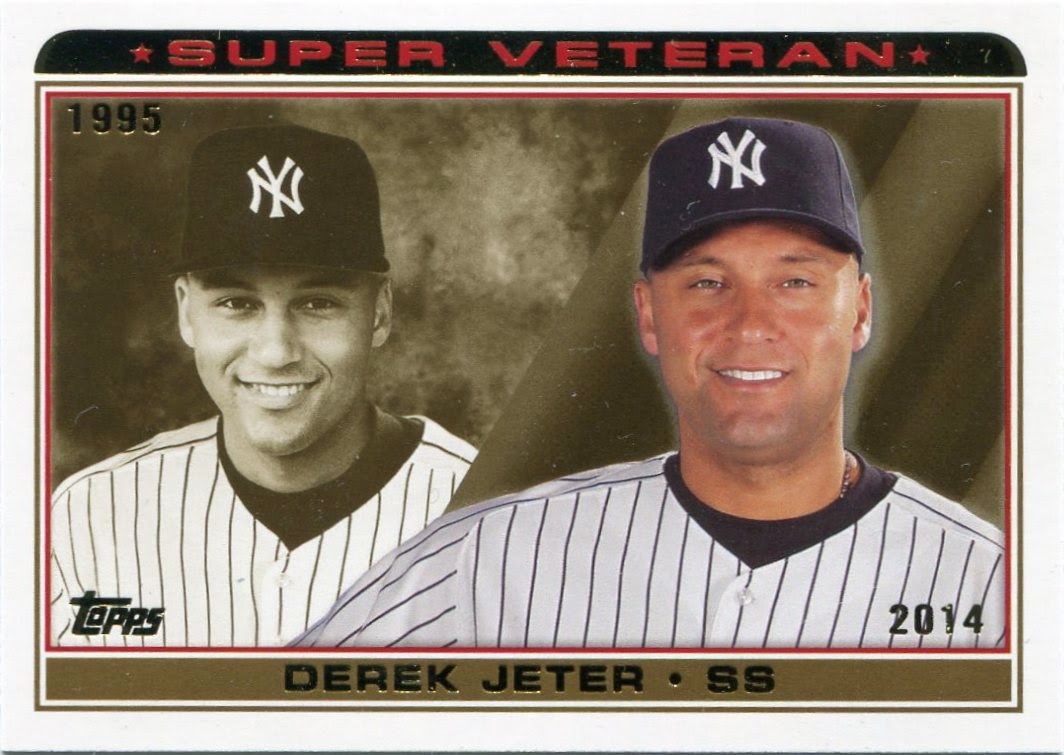 Reviving the "Super Veteran" series is the best idea Topps has had so far this year.

I've become so used to seeing Derek Jeter as the grizzled Yankee captain we know and love that I sometimes forget he was just another inexperienced rookie back in the mid '90s.

Thanks for reminding me, Topps.

And thanks to all these wonderful trade partners who helped bring some sanity to my unquestionably random collection.

It's all that keeps me from becoming a straight-up hoarder.
Posted by Nick at 2:00 PM

Wait, you had a set list needs tab over there the whole time!? Why didn't you tell me a long time ago that I was an idiot for emailing you each time about Hometown Heroes and Cooperstown dupes?