A change in direction 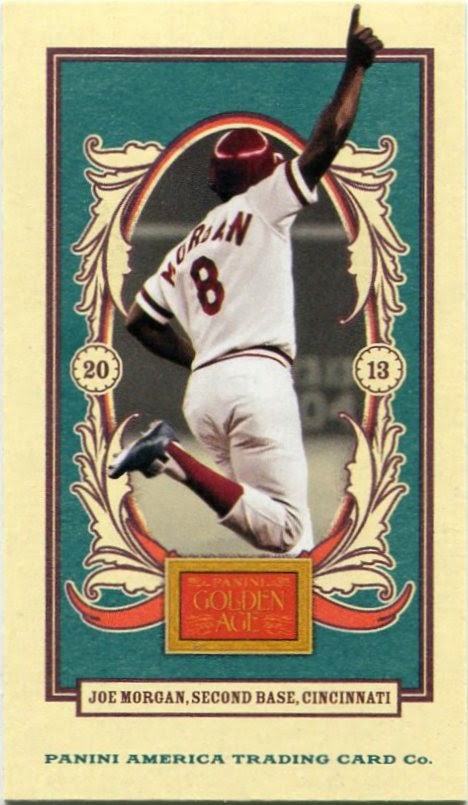 I'd like to say that I have life figured out by now.

These past couple weeks have been a bit of a whirlwind as far as the future goes. I've said in the past that my dream career is to be a teacher. I was planning on majoring in education.

After really sitting down and thinking about it, though, I've started to reconsider. Becoming a teacher isn't out of the question now by any means, but I've recently decided to try and go in a new direction with my school career.

As of right now, I am officially an English major. I've tried to pick up as many books as possible throughout my life, and I've always had a passion for writing. Going further with my English studies just feels right, and making the change has injected a new excitement into my school career.

I'm not sure I would've ever chosen to go down that path had it not been for this very blog. It's become a major part of my life over the past couple years, and I can't imagine myself without it.

Before I started this blog, it seemed like cards were just pieces of cardboard to me. Now, though, I've come to realize that they're so much more. Every card has a story. I just want to thank you, the reader, for all your support and help over these last couple years.

As it happens, a couple longtime friends of the blog recently sent me some great stacks of goodies. The first comes from the ever-generous Mark of the awesome blog "This Way to the Clubhouse...". I've lost count of how many packages we've sent back and forth.

Mark's always been a trading MVP, but this awesome Joe Morgan mini is definitely one of the better gifts he's ever sent me. 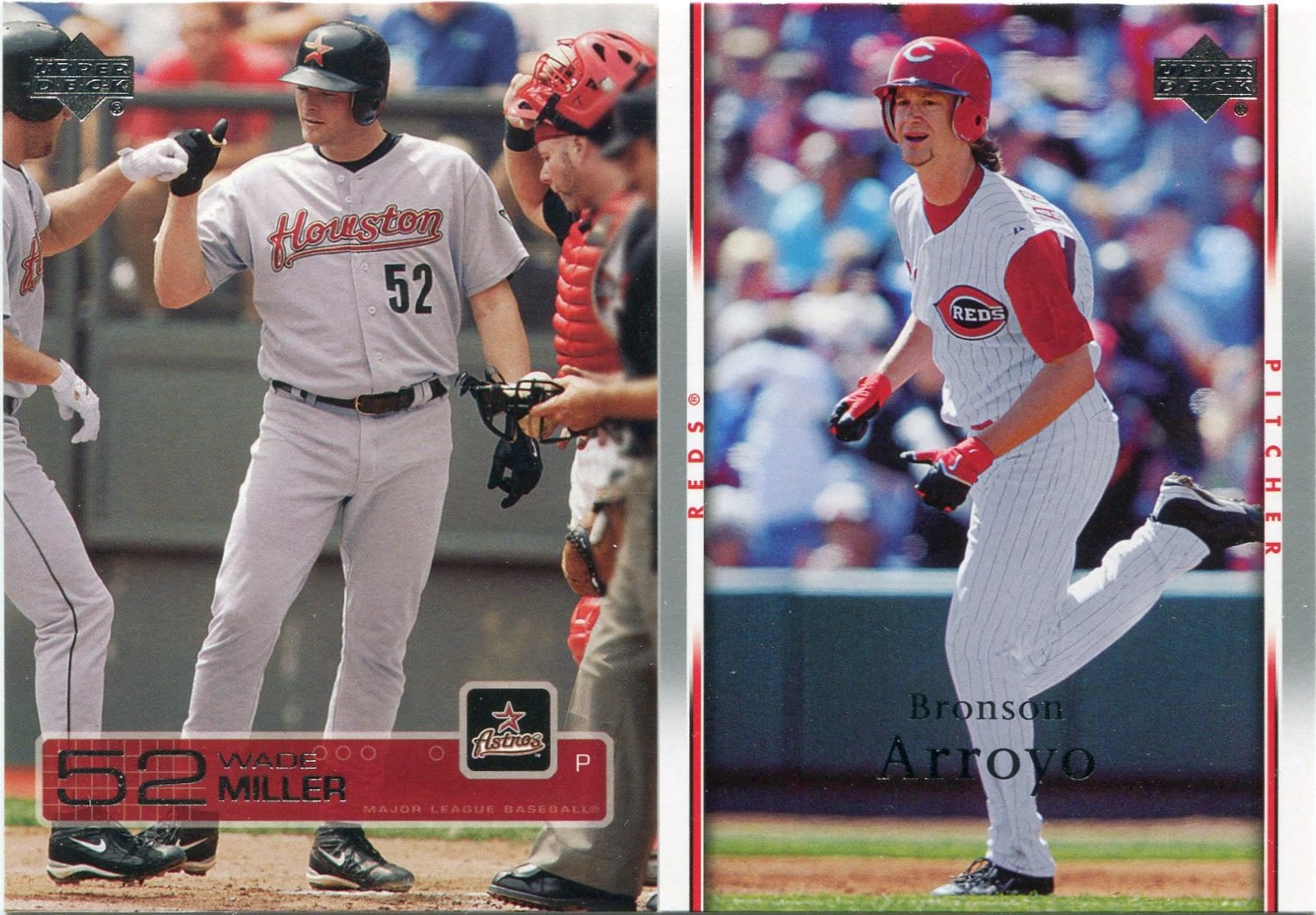 The appreciation I have for the blogging community is endless.

I have a great group of friends. But, as I've said in the past, I have yet to meet anyone who collects baseball cards.

Starting this blog has helped me realize that there are a lot of people out there just like me. People who get the same thrill out of collecting as I do.

These people are even willing to put forth the time and effort to hunt down hits for my many wacky mini-collections.

Mark certainly hit a home run with these two "pitchers on the basepaths". 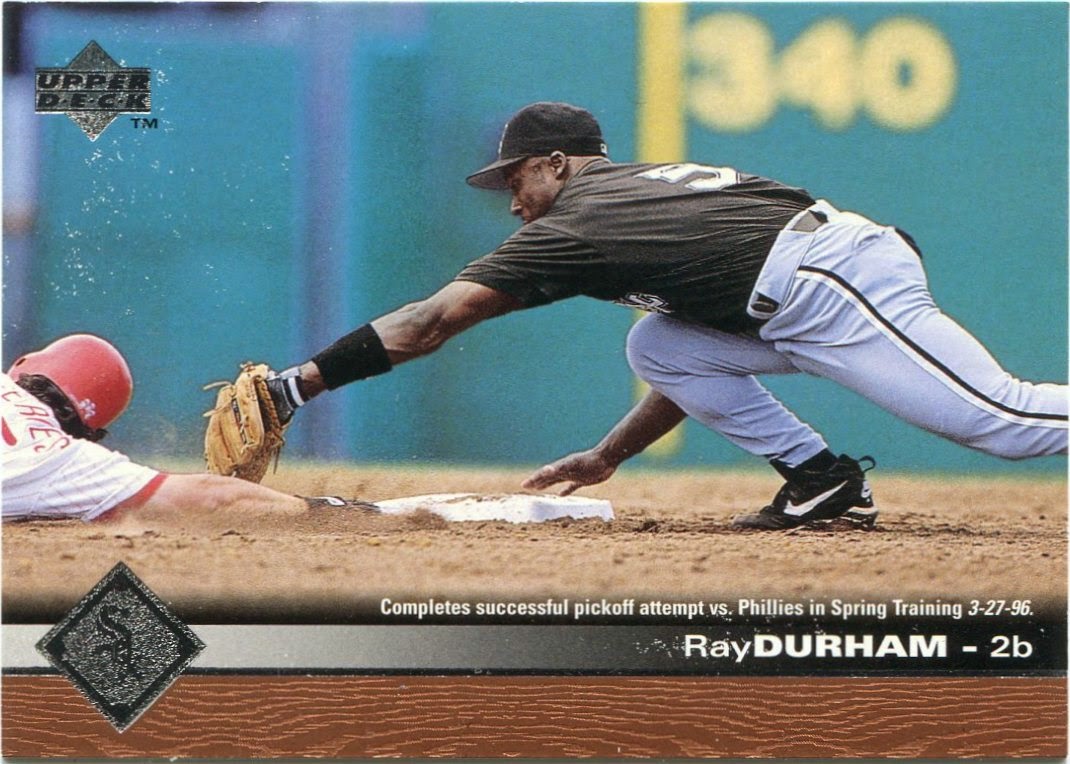 In developing a blogger friendship, you get a good sense of what the other person likes after a while.

I think Mark and I are at that point. While this Durham doesn't fit snugly into any of my mini-collections, I was ecstatic to see it fall out of this mailer.

Coming from the criminally underrated 1997 Upper Deck, this fantastic piece features a shot of something you don't often see on cardboard. The second-base pickoff.

It doesn't work often, but it sure is exciting when it does. 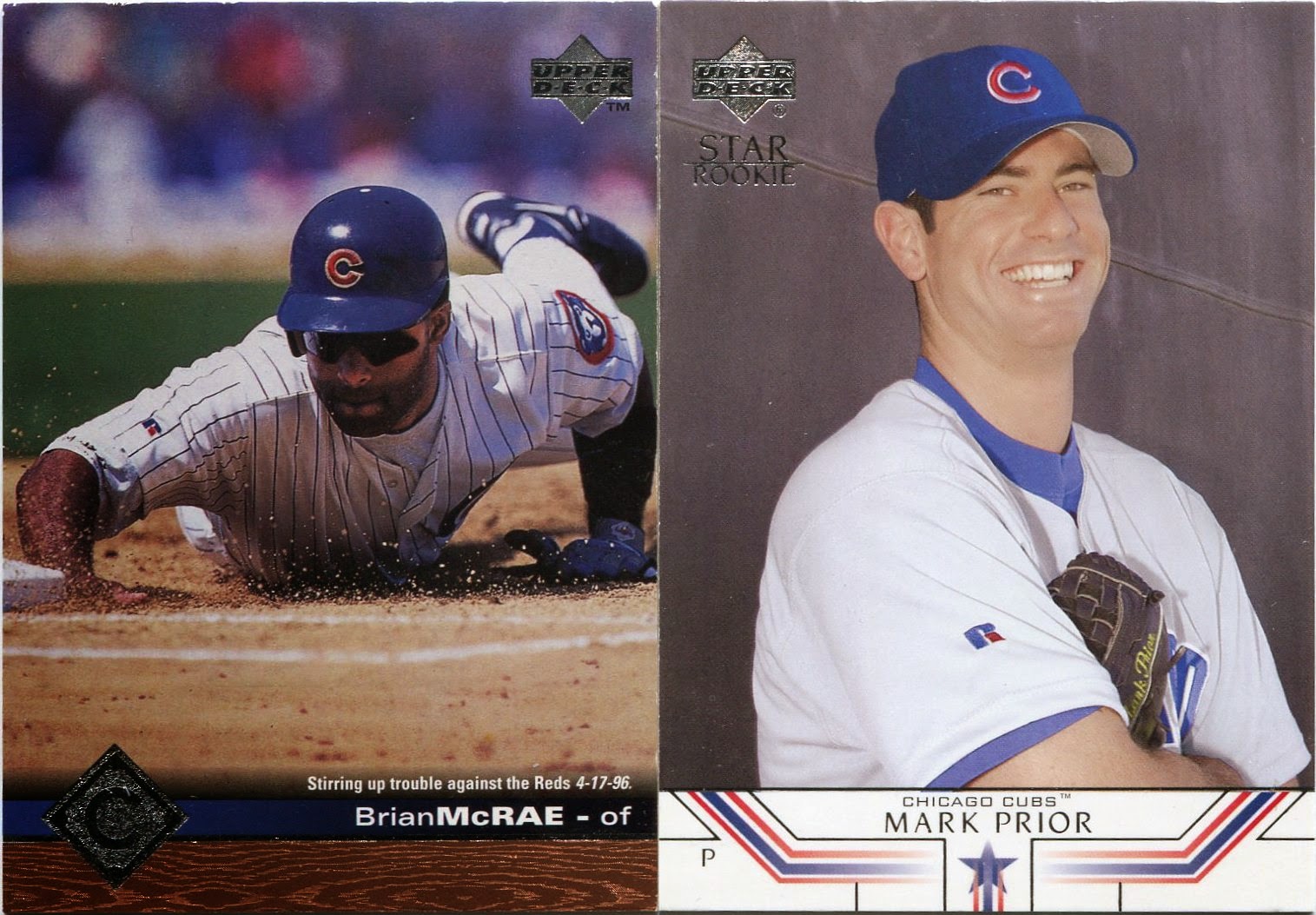 Mark knows of my Cubbie fandom by now.

Though I wouldn't say I'm a team collector, a lot of people seem to send me Cubs cardboard. I'm completely okay with that.

While I love my entire collection, I have a special bond with my Cubs binders. Though Mark Prior didn't pan out over the long haul, I get a special twinkle in my eye when ever I see cards of his.

I'm still not quite sure why. 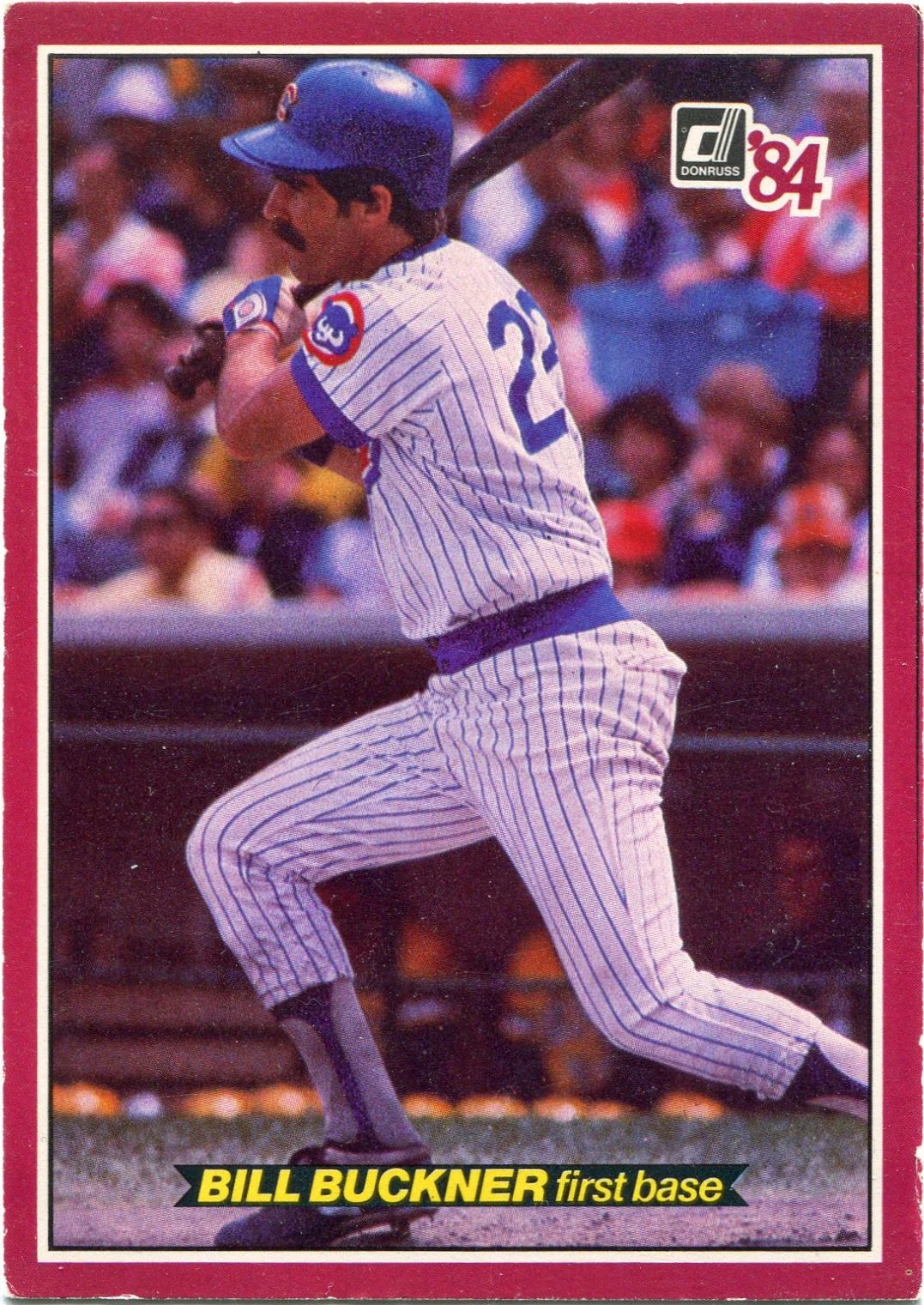 Though it may be tough to tell from the scan, this Buckner is one of those oversized '80s Donruss inserts.

From what he told me, Mark picked this one up for nothing. And, no, I don't mean that in the sense that he got a good price on it.

It literally cost him nothing.

A guy at his local card show had a stack of these oversized cards in a pile off to the side of his table with a big "FREE" sign next to them. I'm glad Mark scooped this one up for me.

After all, you can never turn down free cardboard.

That's one of the first lessons in Collecting 101. 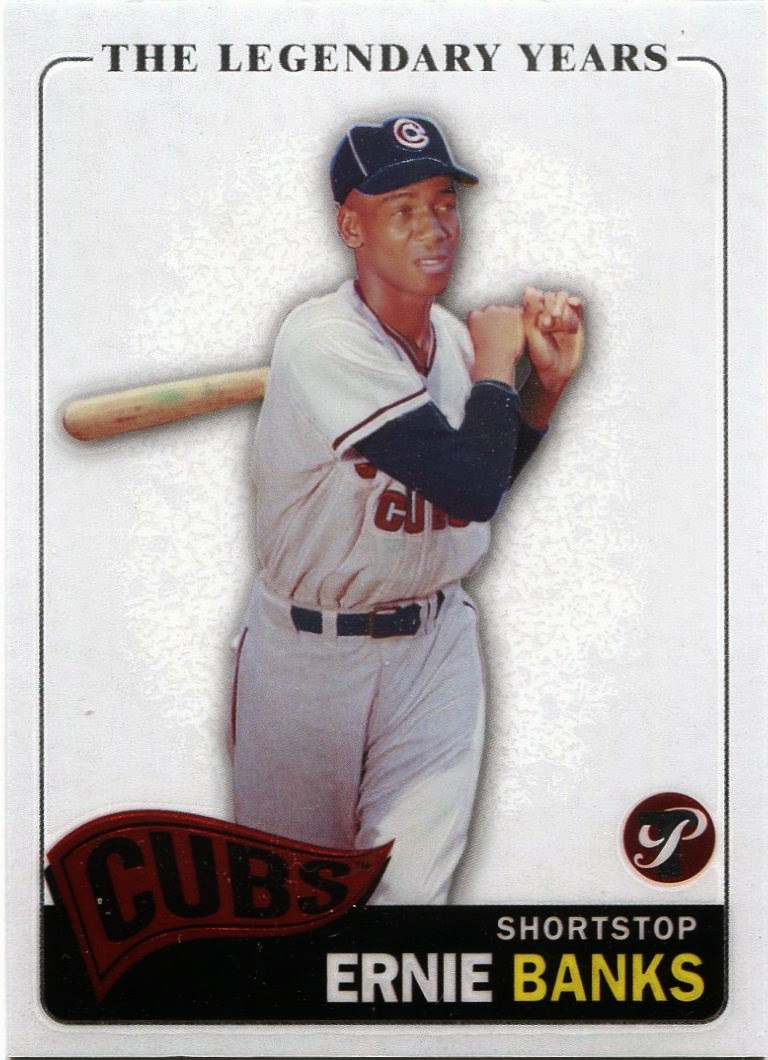 This was the biggest surprise of Mark's batch.

Cards from sets like Topps Pristine don't often find their way into my collection. I've always been disappointed by that. They're absolute beauties, and this particular offering was obviously inspired by the '65 Topps design.

Imagine my excitement when this stunning piece of "Mr. Cub" fell into my hands. I'm sure Mark had a feeling I'd like this one. Boy, was he right.

It's an honor to have people like him in this community. 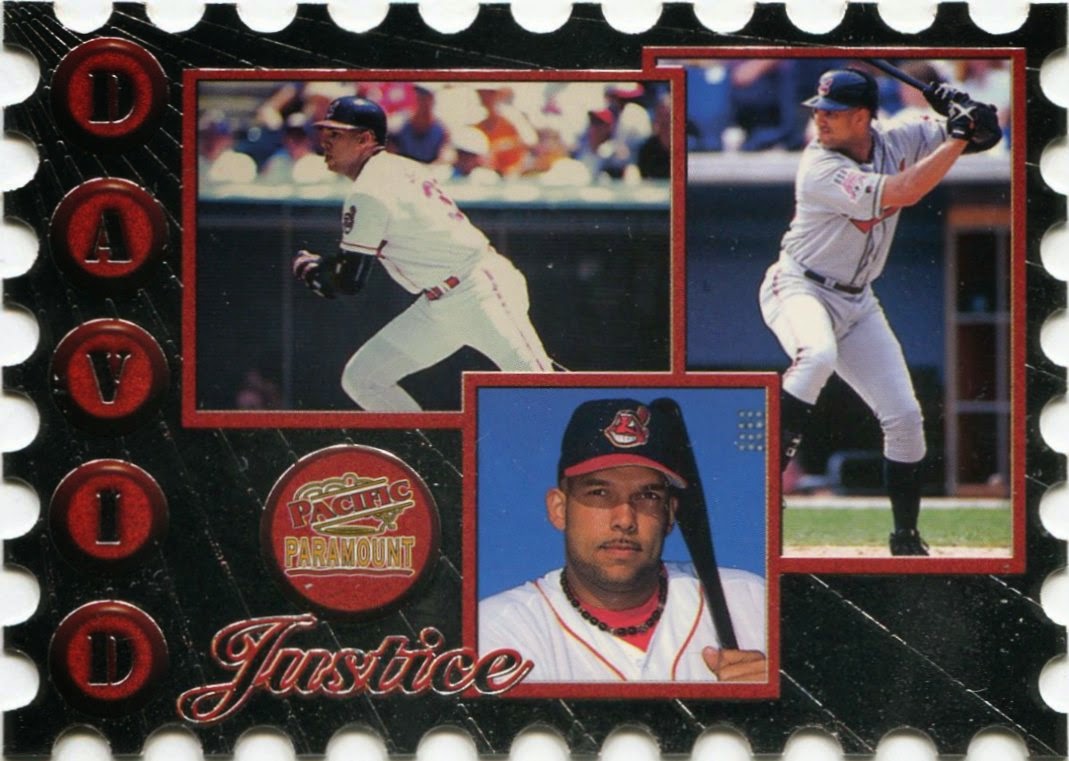 Another one of my longtime blogger buddies is Douglas of the awesome blog "Sportscards from the Dollar Store".

Since he lives in Canada, he's allowed me to keep in touch with baseball fans north of the border.

That wide range of connections is another thing I love about the blogosphere.

I read Douglas's blog any chance I get. I distinctly remember him posting this wild David Justice insert not too long ago. Though I never specifically asked for it, I did hint that I wouldn't mind having it in my collection.

Thankfully, Douglas picked up on that. He added it to another wonderful assortment of cards he sent my way.

As many collectors know, Pacific is the king of crazy inserts. This one is supposed to look like some sort of stamp. I'll admit, the many perforations made it hell to slip into a nine-pocket page.

But I still love it nonetheless. 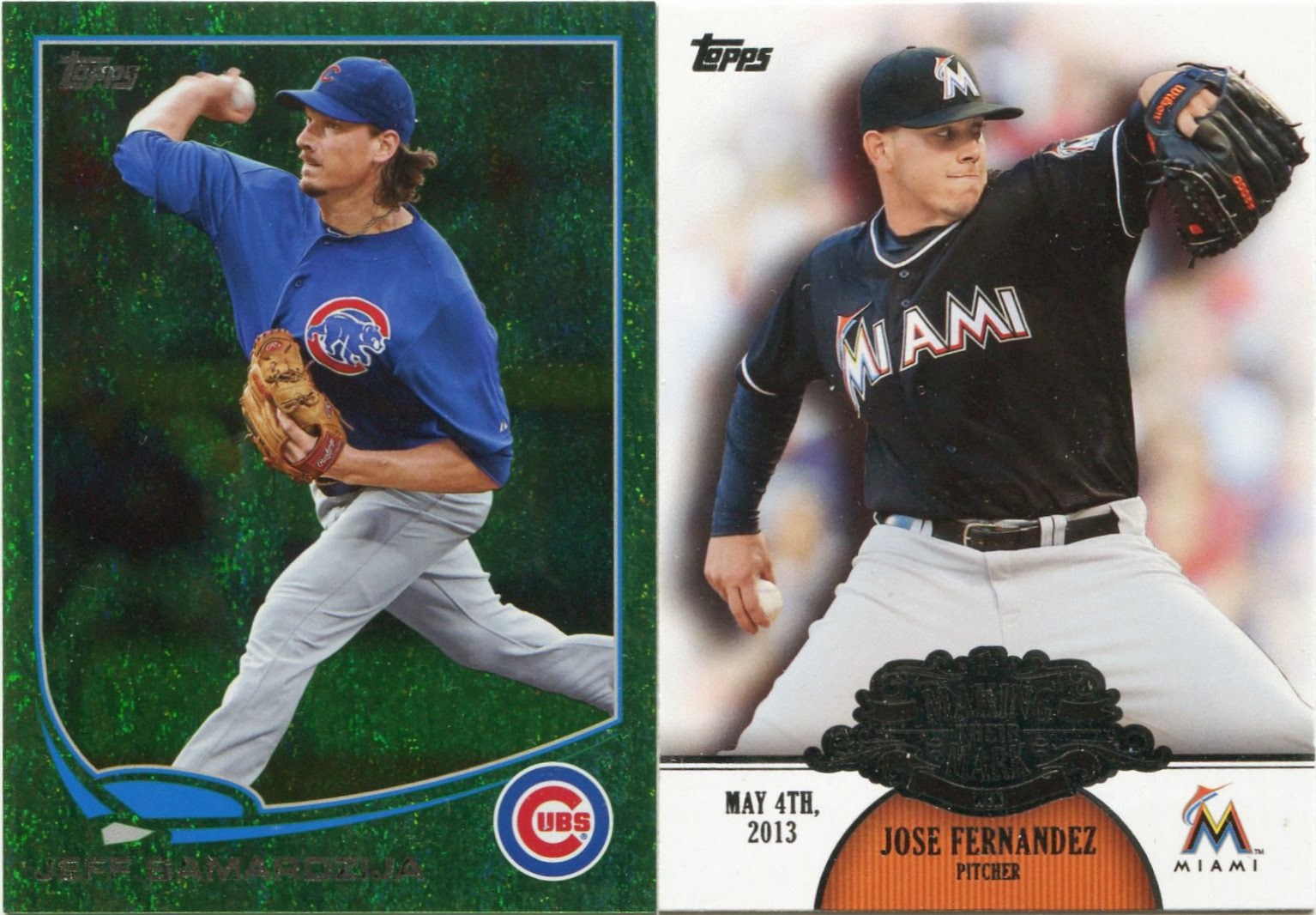 Douglas also slipped a few of my 2013 needs into this envelope.

He sent over a little more Cubbie love with the emerald Samardzija.

It took me about four years, but I finally know how to spell his last name by heart. 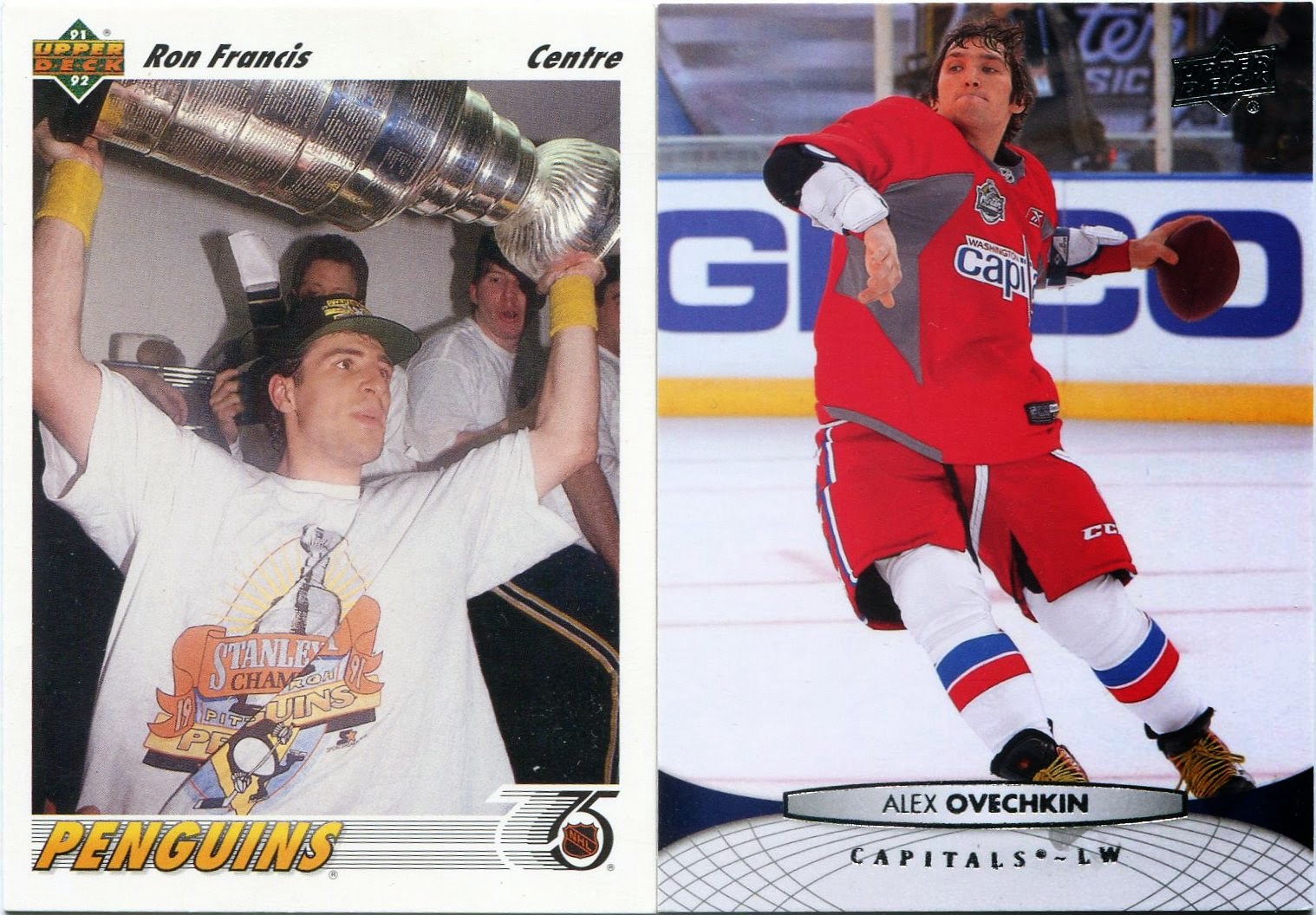 The only time I show hockey cards on this blog is when Douglas sends some my way.

In each of the many envelopes he's sent me, he's made it a point to track down a few hockey takes on my many mini-collections.

After all, the Stanley Cup may be the most iconic award in all of sports. And, despite what you may think, "multi-sport heroes" can also be found on the ice.

Hockey and football sure do seem like an odd mix.

Maybe some sort of pigskin-on-ice sport is on the horizon. 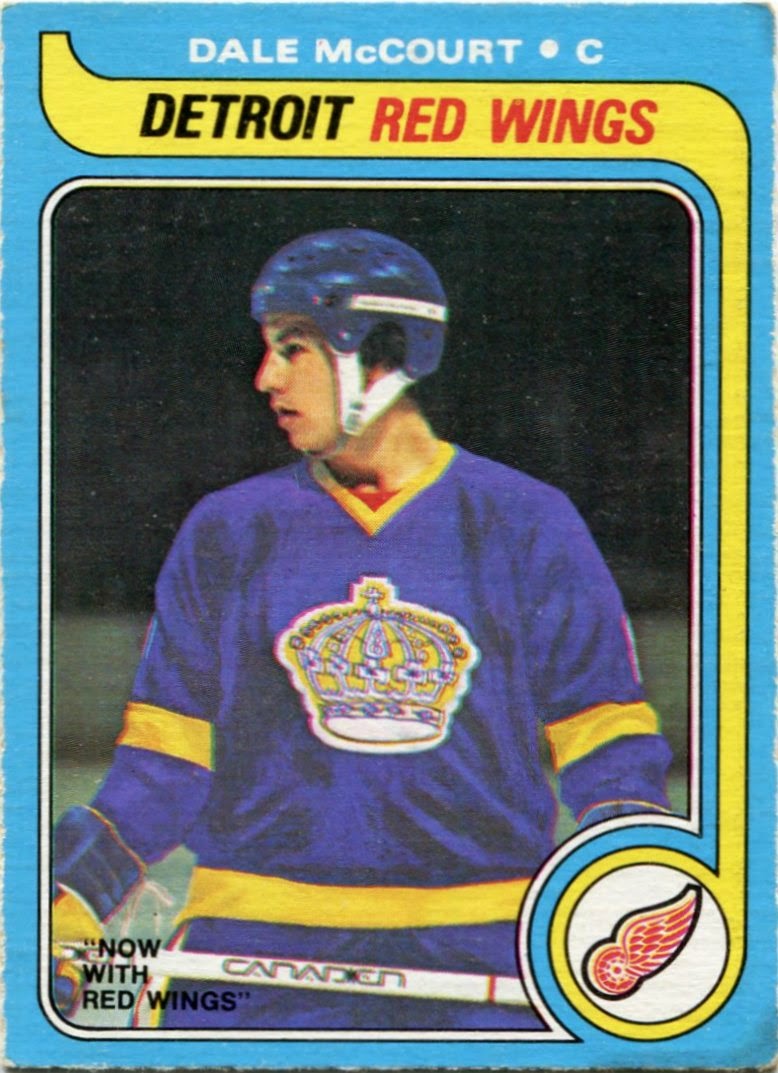 Douglas even managed to find a "zero-year" hockey card.

Plus, from what he told me, this particular one has a pretty fascinating story behind it. 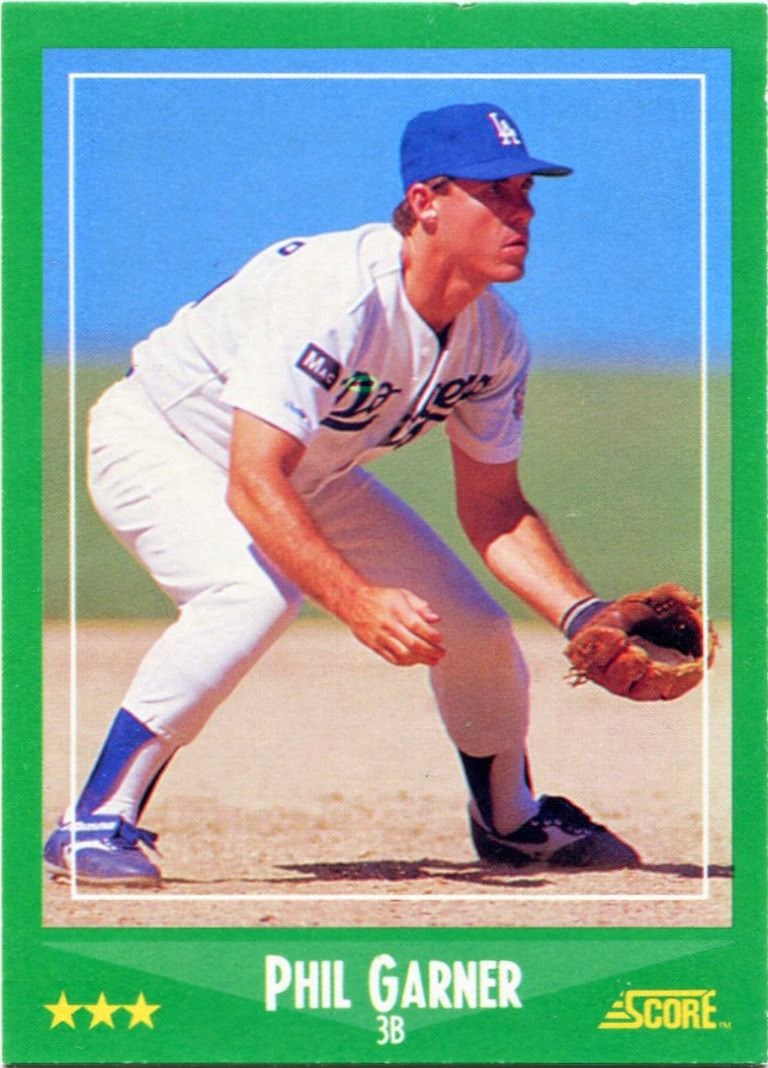 Over the last year or so, Douglas has cemented himself as the "Dime Box Dozen" king.

I've lost count of how many of them he's found at this point, but it's quite a few. My collection will forever be indebted to him.

Mr. Garner here had one of the shorter "Dime Box Dozen" tenures in history. He was only up there for a couple days before Douglas hunted him down.

Besides his 1988 Topps issue, this is the only other card I know of that features Phil Garner as a Dodger. He played with them for 70 games in 1987.

I've never seen a card that features Garner's 15-game stint with the '88 Giants, which means that this takes its place as a "sunset" piece in my collection. 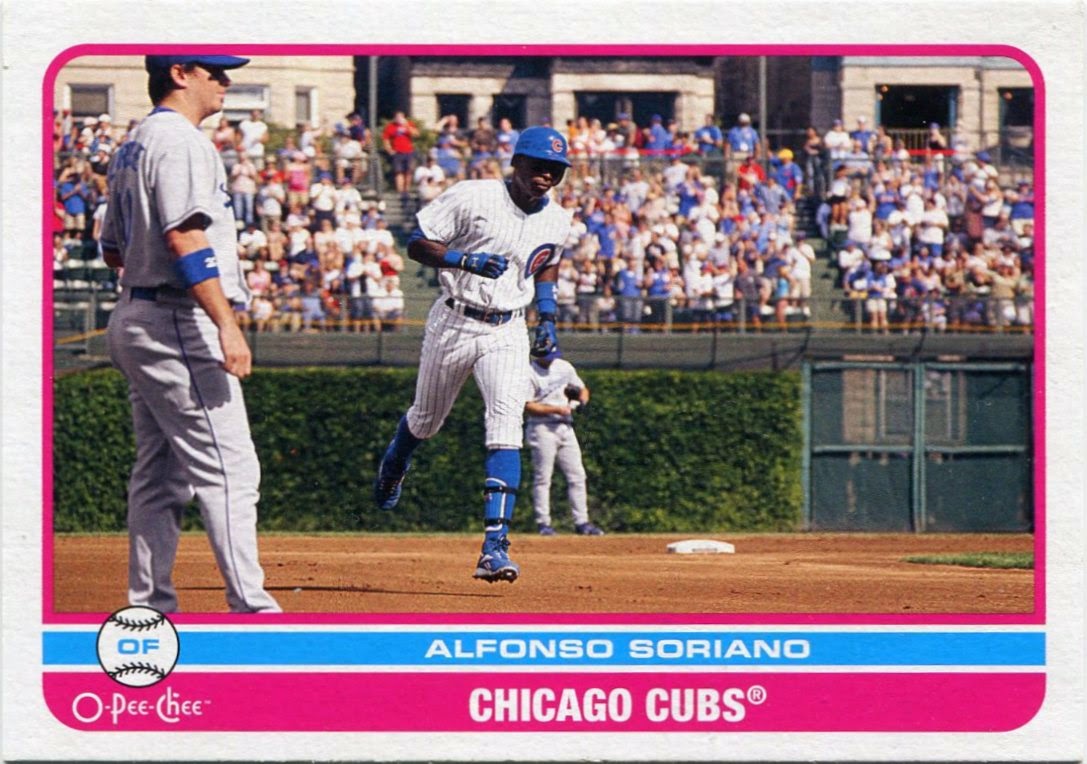 As if that weren't enough, Douglas bumped off my longest tenured "Dime Box Dozen" need with this one.

Mr. Soriano has been on the sidebar for at least six months or so. I fell in love with this beautiful Wrigley Field shot at first sight.

It's great to finally have it in my arms.

It wouldn't have been possible without the efforts of people like Douglas.

While I may not have life figured out by now, at least I know that I'll always have my treasured card collection. And this blog.

I don't think I've ever seen Phil Garner without a 'stache!

I think this is the first post of yours that I've read that has had some hockey cards on it. Very cool.
My advice...stick with your orignal plan. I spent some time at Berklee College of Music and it seemed like all of the teachers had albums out (this was the late 80's) and were playing gigs around Boston. There's no law that says you can't write while you teach.

Good luck with whatever direction you take. I agree with S&P, though. You can certainly teach AND write. If you have the right temperament, teaching is about as honorable a way to make a living as there is. In the short time that I've managed to get to know you, I can tell you that you're someone I'd like to have in the classroom teaching my kids. Like you said, though, all doors remain open.

I was an English major at one point. I switched marketing and that's where I got my degree, but looking back I probably should've stayed with English.

Firstly, thanks for the kind words, Nick. Your blog inspires me and countless other readers/collectors on a daily basis. Glad to contribute any cards to your collection.

And, as for college majors, as long as you don't major in Radio/TV/Film, you'll be just fine!