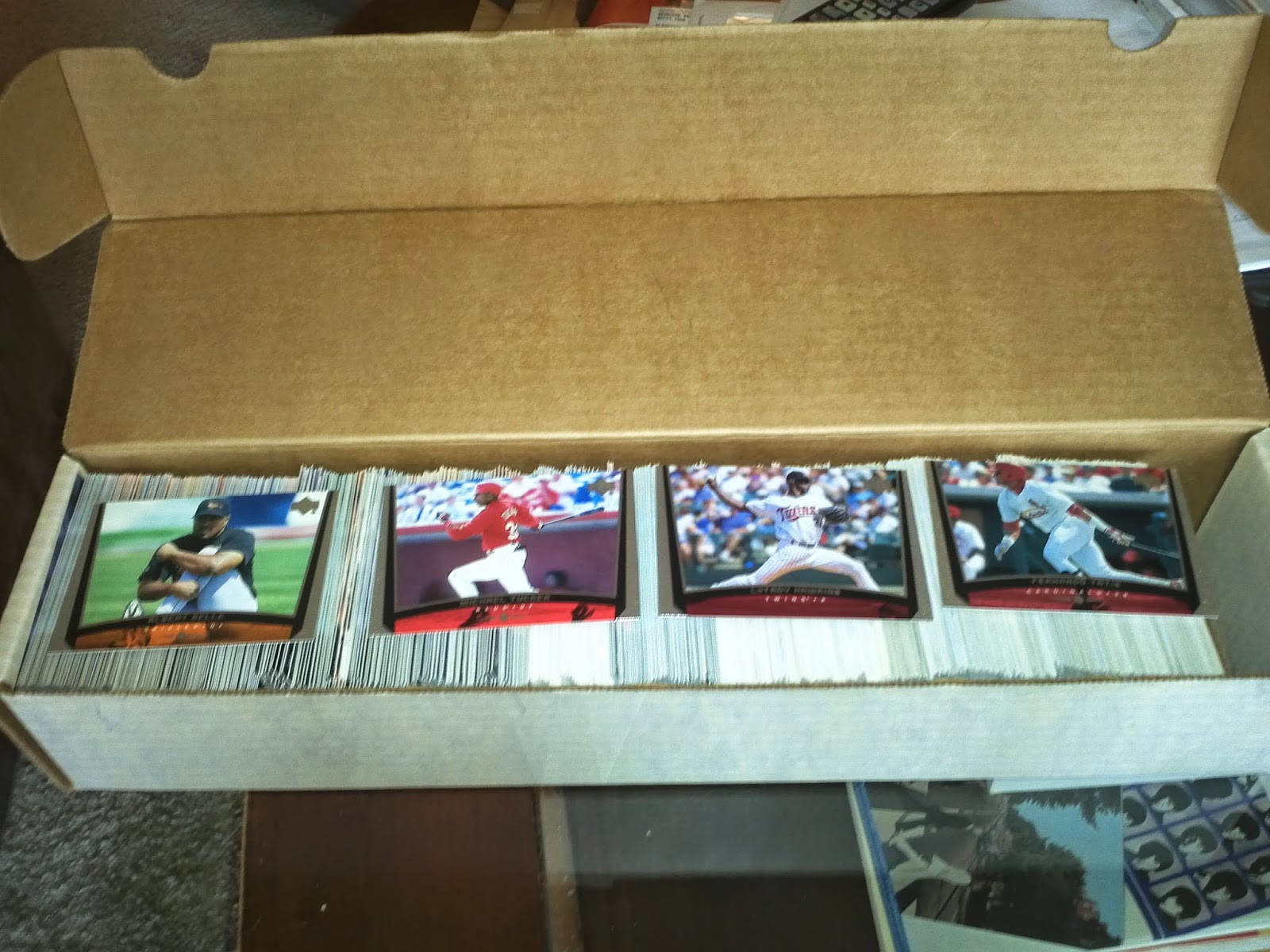 In case you missed yesterday's post, my 2014 flea market season started with a bang this past Sunday.

Between quarter boxes and Beatles cards, there was certainly a lot to like. But that wasn't even all of it.

During my first trip around the flea market on Sunday, I spotted a guy who had a huge stack of long card-filled boxes on display. Since he didn't have much in the way of individual singles, though, I passed up his table. Vendors like those aren't usually my cup of tea.

Just as I was planning to call it a day, I decided to go back and take a closer look at what the guy had. I'm glad I did.

In what seemed to be a running theme of the day, none of this guy's selection was priced. A quick peek at the fronts of a couple of the boxes saw things such as "1990 Topps" and "1992 Donruss" scrawled on them. You'd have to pay me good money to take those off somebody's hands.

However, a couple of the boxes intrigued me. I asked how much he was asking for each box, a little scared of the answer. Once again, I breathed a huge sigh of relief when he said he'd let them go for five bucks a piece. Better yet, he was willing to cut me a deal if I bought more than one.

After all was said and done, I took home two boxes for a grand total of eight bucks. The first was filled with about 600 cards of 1999 Upper Deck, the infamous "salad tongs" set.

Anything from the late '90s is a definite score for me since I don't own a whole lot from the era. Although all the Cubs and White Sox had been plucked out and there were a fair amount of doubles, I still probably landed about 80 percent of the complete set.

So, to recap this terrific find, I figured I'd feature my five favorite cards from the box. 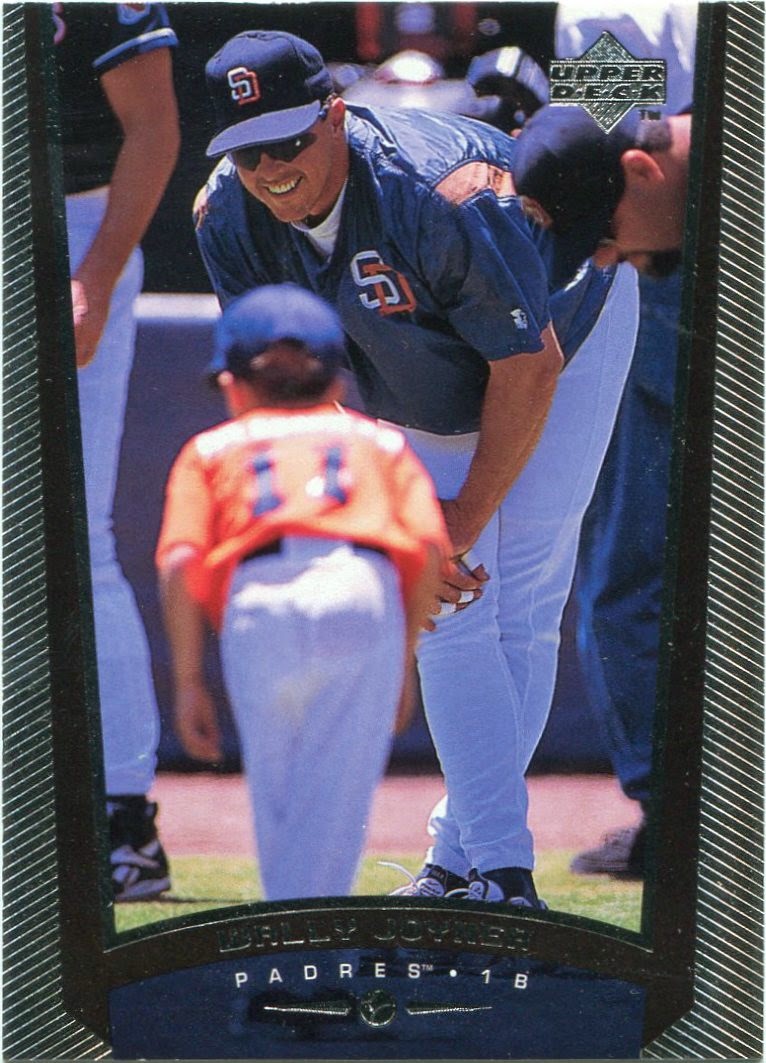 If I ever got around to ranking Upper Deck's complete run, their 1999 release would probably come in somewhere near the middle.

It's not their best effort, but it's definitely not their worst. The overdose of foil and the "salad tongs" design are strange, but this set has enough going for it to at least be respectable.

As usual, UD didn't slack with their photography in '99.

I'm a big fan of this candid "cards with kids" shot of Wally Joyner. 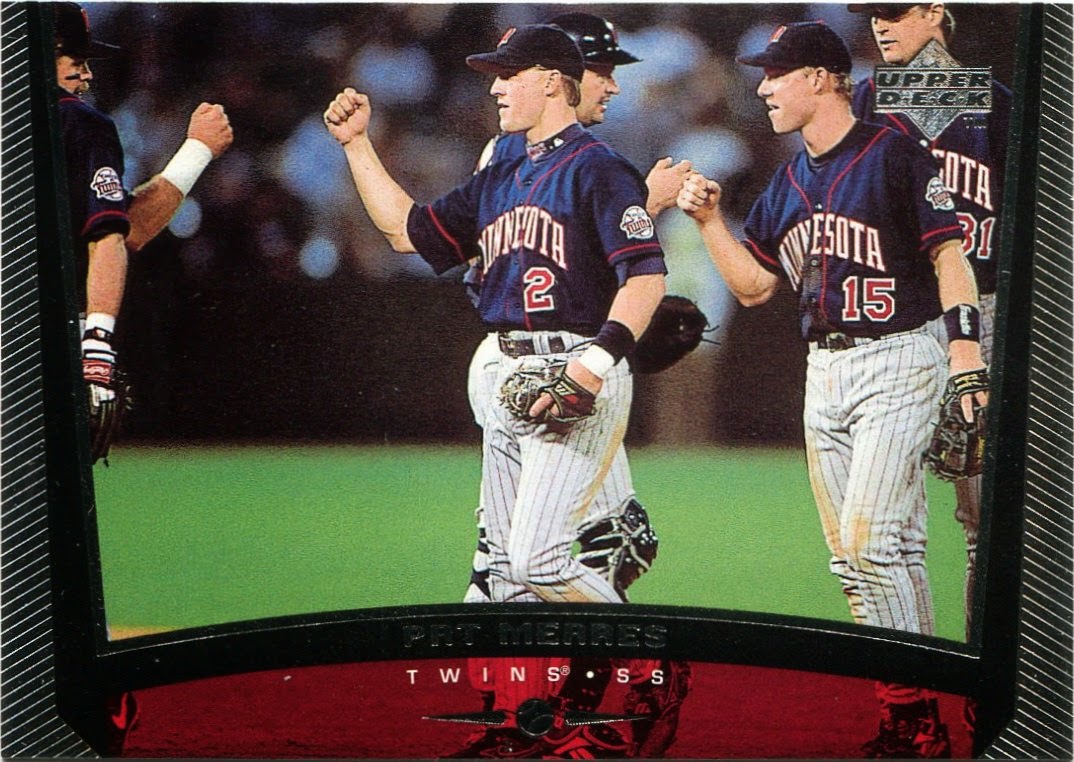 Initially, I thought this was a shot from the old Metrodome.

Now, I'm not so sure. The uniforms featured here were only worn on the road by the Twins in the late '90s, so I have no idea what stadium that is. I've never been good at that sort of thing.

Either way, though, it's a terrific postgame shot that was definitely one of my favorites from this box. 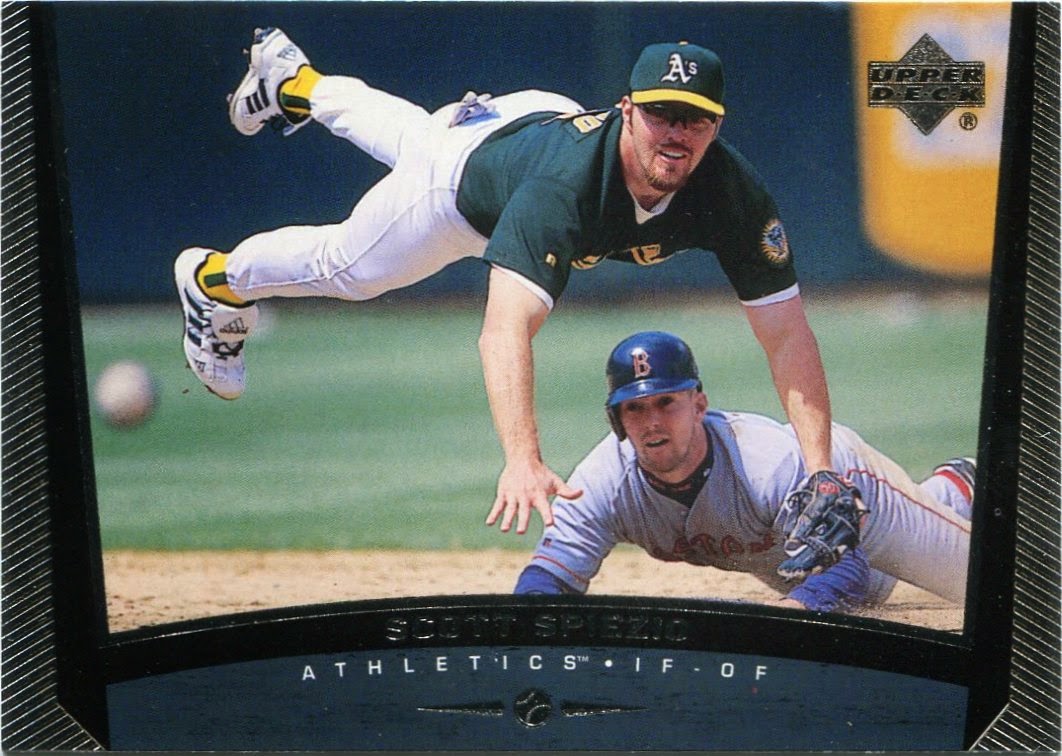 Now this, my friends, is a great double play shot.

It was around this time that I realized something about 1999 Upper Deck.

Many of the vertical cards in this set are forgettable. Many of the horizontal pieces, however, are stunning. I found myself stopping and staring at a lot of them during my dig through this box.

I can't help but wonder how much an all-horizontal layout would've helped this set's reputation. 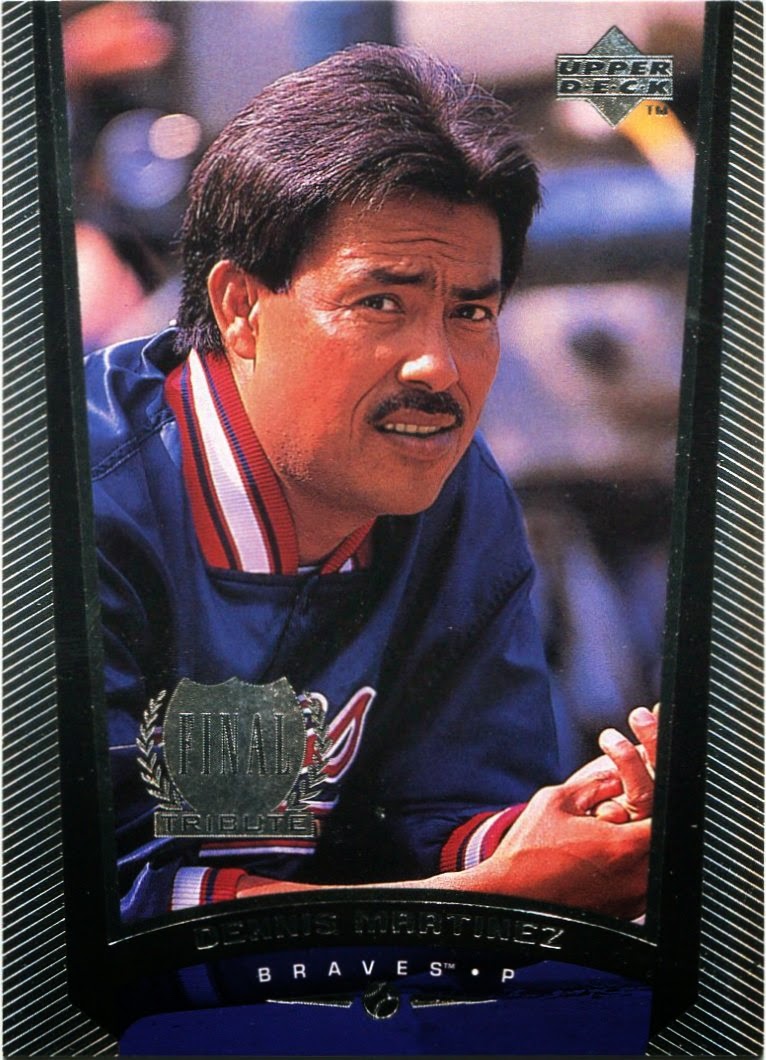 This one doesn't win any points for photography.

It does, however, deserve a ton of respect for being the only true "sunset" card of Dennis Martinez in my collection. It has full career stats on the back and even features the cool "Final Tribute" badge that popped up on a lot of late '90s Upper Deck cards.

On top of that, "El Presidente" only pitched in Atlanta for a single season, which makes it a nice "short term stop" candidate as well.

For a while, I thought it'd hold the top slot in this countdown. 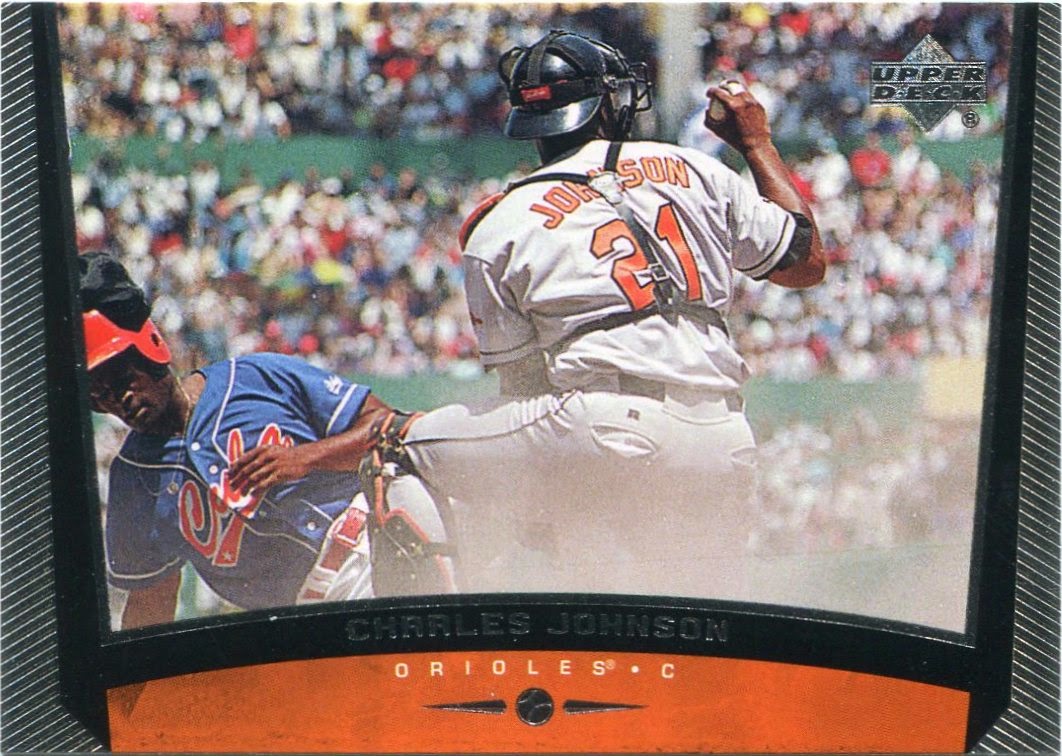 That is, until I took a closer look at this one.

On the surface, it seems like your standard "play at the plate" shot. Cool, sure. But nothing we haven't seen before.

It wasn't until the second viewing that I noticed the uniform of the runner sliding into Charles Johnson here.

Since when do the Orioles play Cuban teams?

A fascinating bit of research showed that the O's played two exhibition games against the Cuban National Team in March and May of 1999.

The Orioles won the first contest in Havana, while Cuba took the second one in Baltimore. America was introduced to a star Cuban pitcher named Jose Contreras during those games.

Though I can't find an official box score of either contest, I'm pretty sure this shot was taken during that second contest at Camden Yards.

I'm always appreciative of any card that leads me to a new facet of baseball history.

Needless to say, it takes its place as one of my new favorite frankenset inductees. 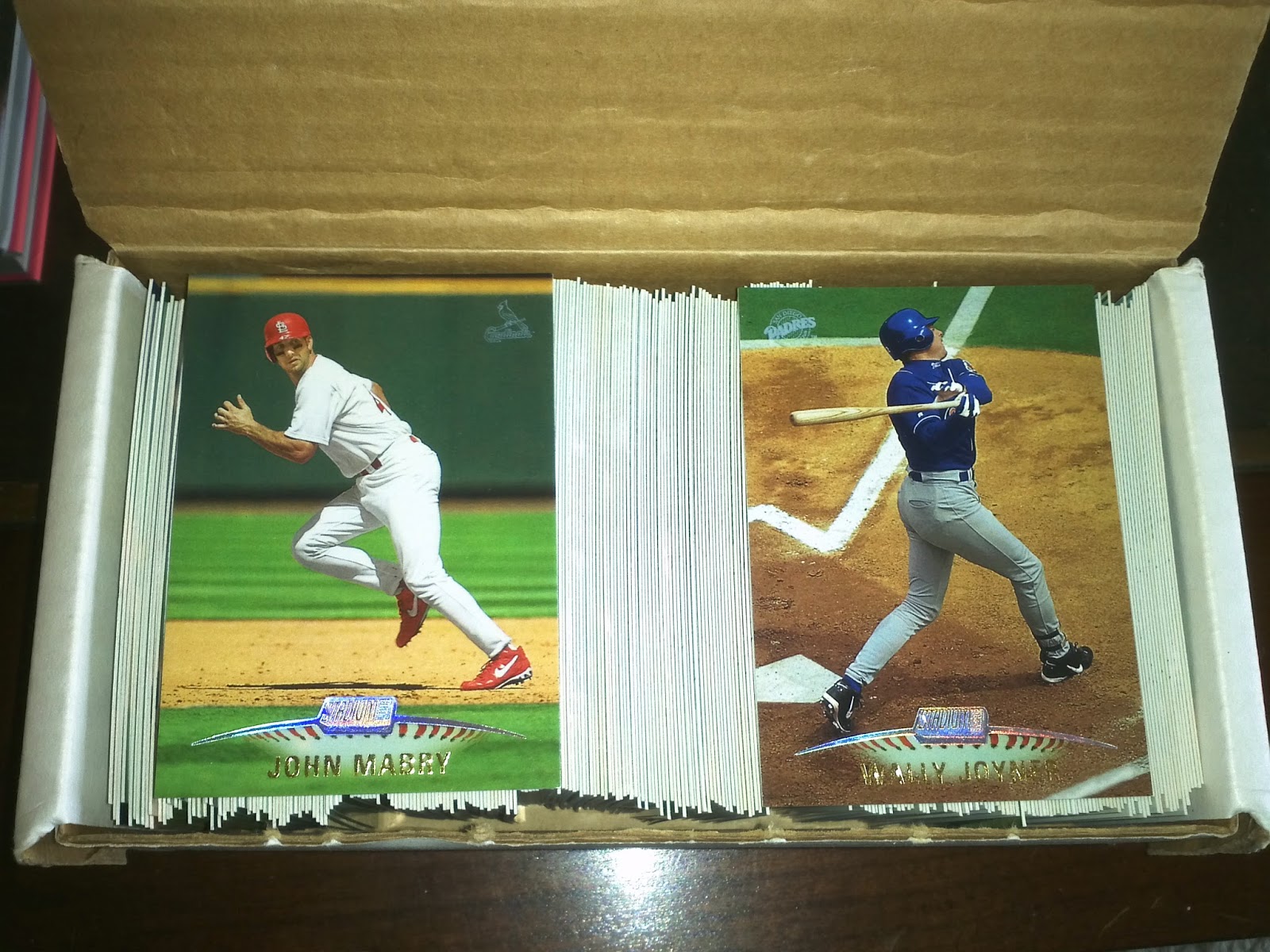 The second of the two boxes I bought was much smaller in nature, but definitely packed the same amount of punch.

For four bucks, I landed a generous lot of 1999 Stadium Club singles. Again, there were a decent amount of doubles and lacked any Cubs or White Sox, but that didn't take away from the fun of it at all.

I probably don't have to tell you about how much I love Stadium Club and its awesome photography by now. Their offerings from the late '90s were the cream of the crop in the hobby, even if most collectors didn't know it at the time.

Let's dive into the top five from Stadium Club, shall we? 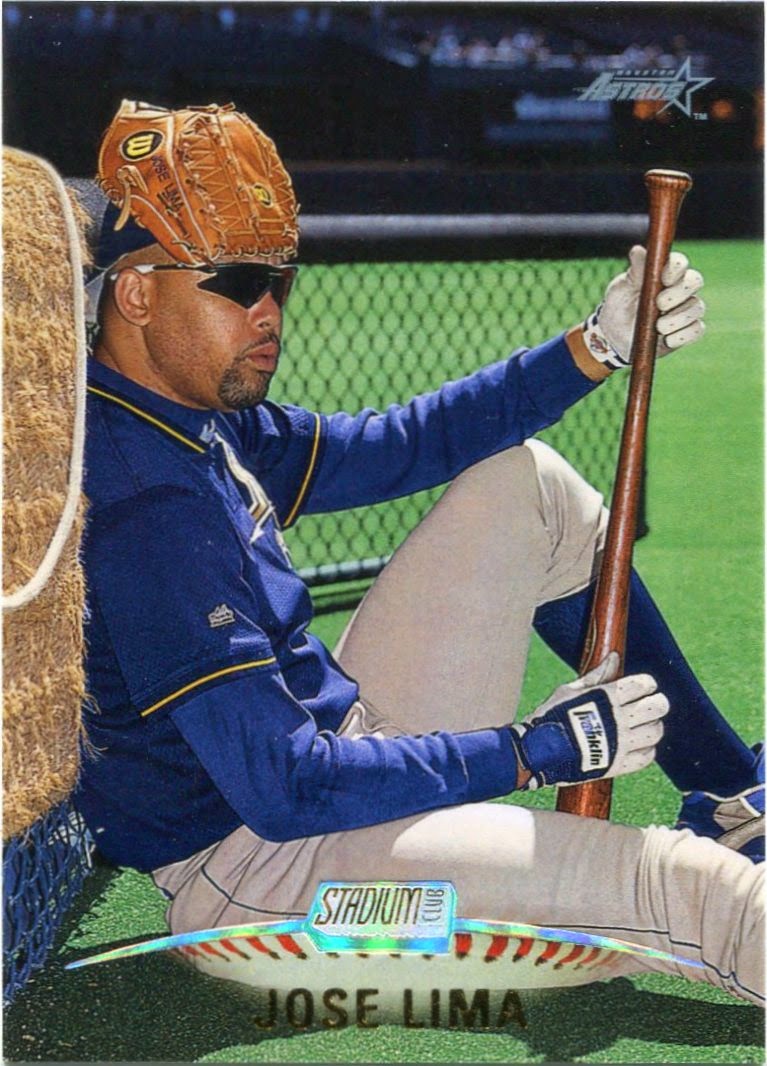 I don't think there has ever been a bad card of the late Jose Lima. From what I've seen, the man had an unmatched passion for the game of baseball. It's a shame we lost him so soon.

He was a pretty good pitcher in his day. To me, though, he'll always be the guy playing air guitar with a bat and a glove on his head.

It's the perfect shot of such a fun-loving man. 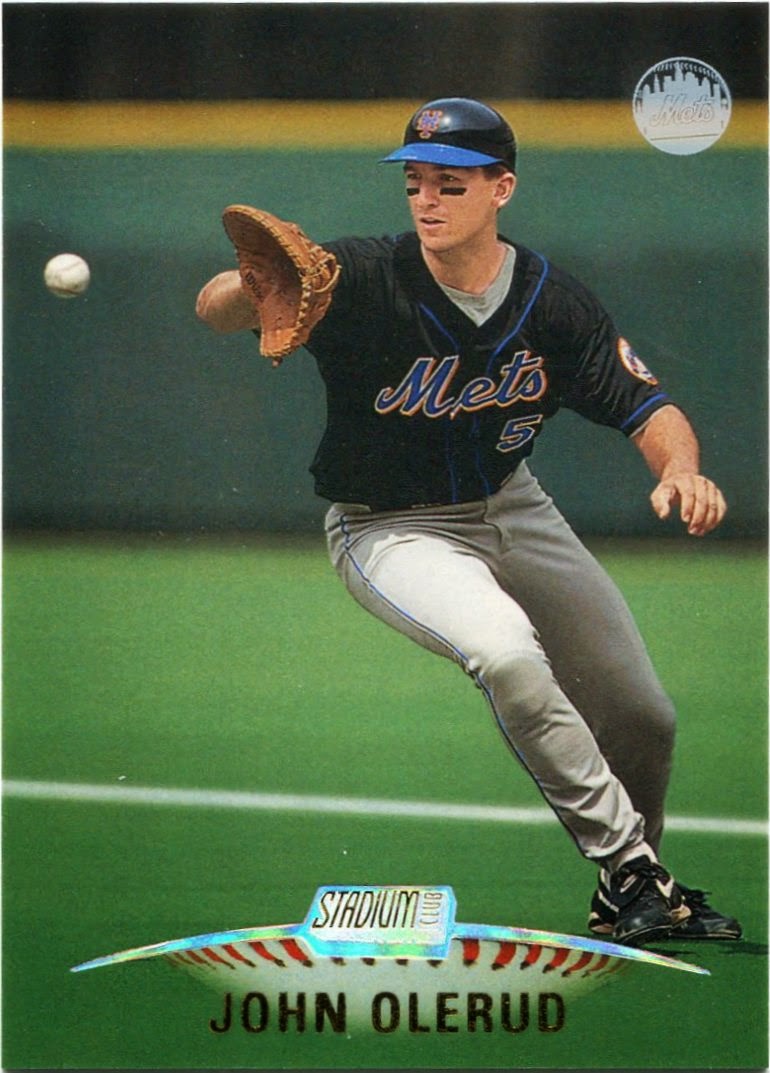 John Olerud is probably one of my five favorite guys to collect.

Any opportunity I get to land a new card of his is a pleasure. Before Sunday, I'd never seen the terrific job Stadium Club did with him in '99.

Olerud was a great hitter and one of the more underrated players of the last few decades. He might be best known for wearing a helmet out on the field, the result of a brain aneurysm he suffered in college.

Though I simply knew him as "the guy with the helmet" as a kid, I've come to appreciate John Olerud's entire career over the years.

He's one of the centerpieces of my collection. 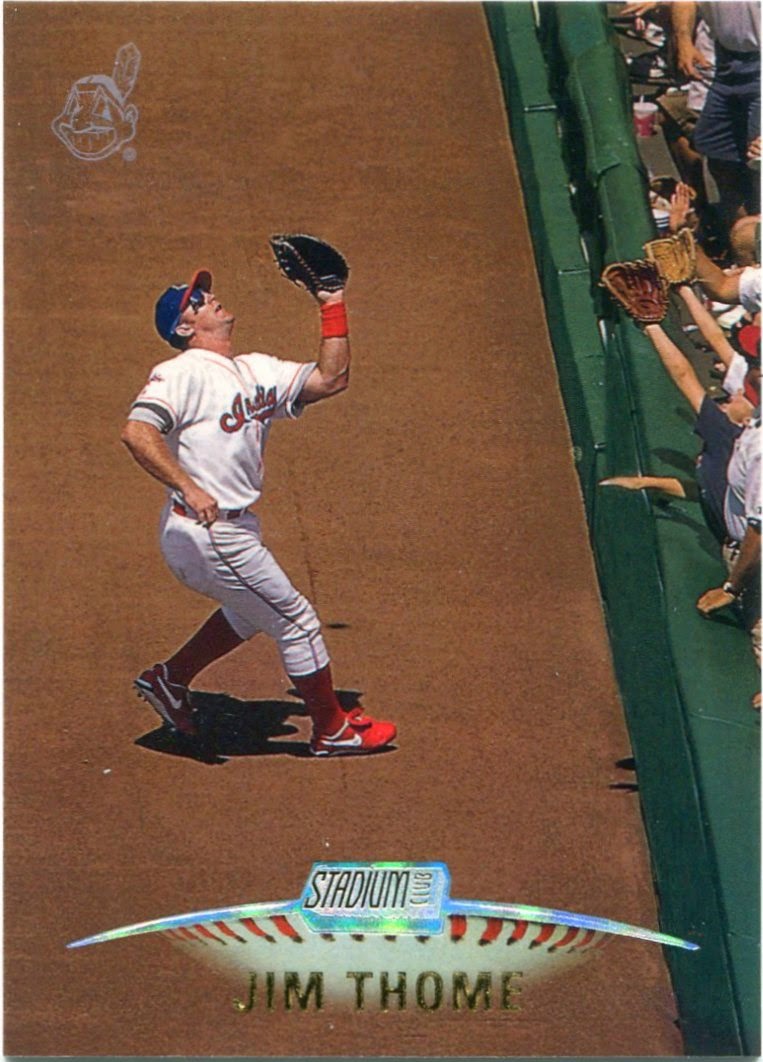 Now this is why I love Stadium Club so much.

What I find myself wondering is where the photographer was sitting when this shot was snapped. It's hard to envision a scenario where you'd get this type of an angle down the first base guard rail.

All I know is that Stadium Club sure knew how to hire professional photographers. 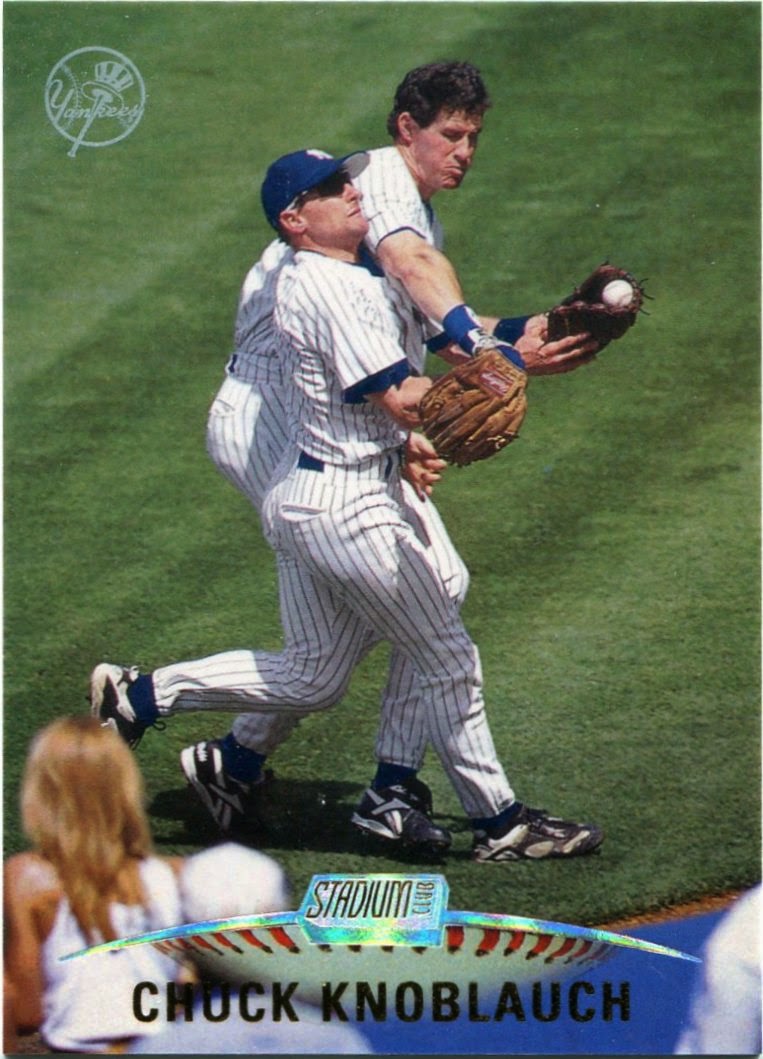 See what I mean?

Only Stadium Club could create something as great as this.

Though Paul O'Neill is doing his best to bowl him over, Chuck Knoblauch is actually the one who ends up making the terrific over-the-shoulder catch here.

I've never seen so many great fielding shots out of a single checklist before. 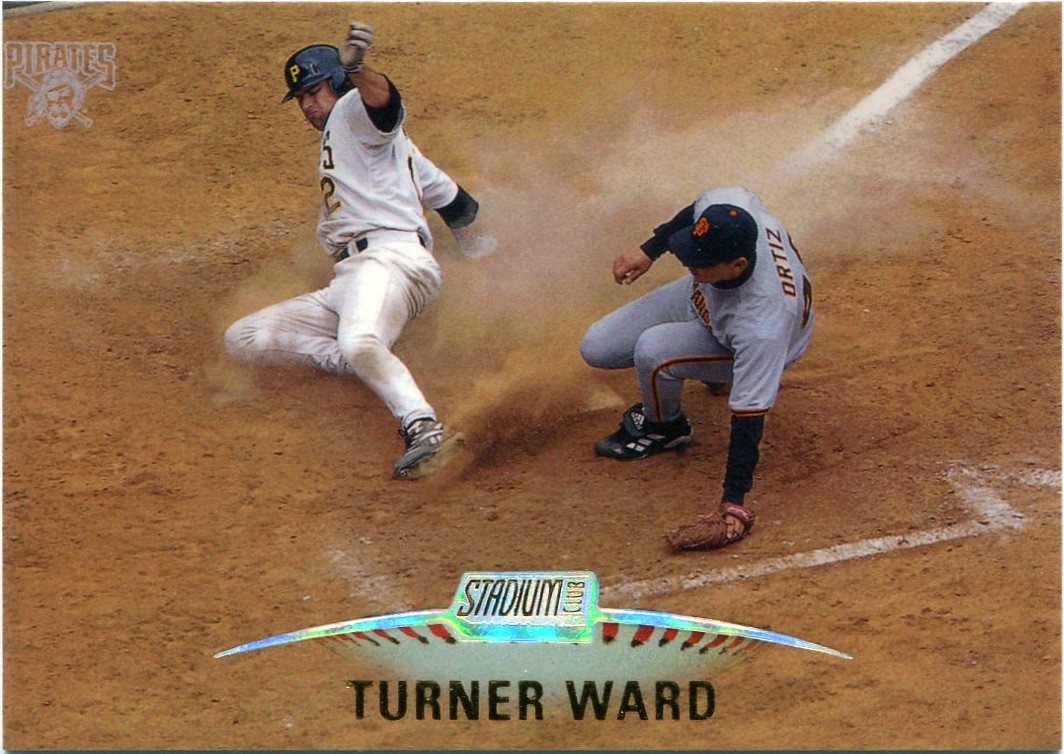 Top honors, however, go to this masterpiece.

Turner Ward looks to have scored on either a wild pitch or a passed ball here, literally leaving poor Russ Ortiz in the dust.

It's one of the more creative "play at the plate" shots I've ever seen.

Believe me, each box had way more than five good cards. It was an absolute blast to dig through such a large number of late '90s cardboard. I don't get many opportunities to do that.

These people are fools. If anyone was to come within 100 miles of me with that much late '90s awesomeness they'd probably be able to drag three times as much cash from my pockets. Don't they know about supply and demand!? Enjoy your supply. I'm stuck with demand. (Good thing I have a great Card Show proxy shopper when I'm feeling particularly demanding...)

Horizontal is where its at, although a set of it may take away some of what makes it special.

I was just thinking yesterday about plays at the plate that didn't involve catchers when I was researching the Josh Phegley card on my 2014 Topps blog. He started a double play that ended with a play at the plate involving the pitcher (but it wasn't captured on the card). I wonder how often this shows up on cards?

The Stadium Clubs were a great find!

I pulled that awesome Thome from a nickel box on my last trip to the Orland show.

Great flea market find... especially those awesome Stadium Club cards. Their photography is second to none.

'99 SC is one of my all-time favorites. I have half a mind to try and build it.

Also, I've always loved that Final Tribute stamp. I have no idea why it didn't stick around. I think it adds value knowing you're holding that player's sunset card. They should bring it back.

As always, really enjoy reading your blog. I wish we had flea markets like this in Maine, you're lucky! All those Vlads for a quarter! Sweet!

Been a while, eh?

As I've been letting the rest of the blogging, reading, and trading crew know: I lost my first blog to a hack job (yep, the whole thing was lost to the nether regions of the interwebs). Well, I'm back!

The Stadium Club's are pure joy, especially that Turner Ward "action at the plate" card.

Eight bucks well spent, I think so too!