Disappointment at the flea market 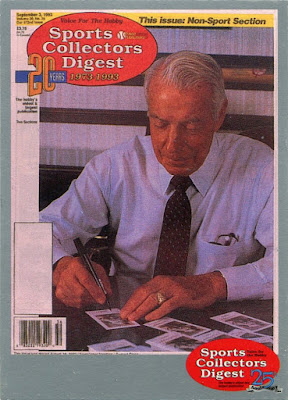 I've come to expect greatness out of my local flea market.

Much of this greatness, as you might remember from my past posts, revolves around one particular vendor named Ron that sets up shop there. So, on a rare week where I actually had a little extra cash (and despite my inner brain's pleas to save said cash for the National), I decided to spend a sunny Sunday afternoon rolling in cardboard at the flea market yesterday.

My regular vendors are located in about the fourth or fifth aisle, but I actually found a guy with cards at one of the very first tables upon entering yesterday's gathering. One of the boxes was all relics, and the other was a dollar box. Trouble was, most of the dollar cards were more dime box material, if that.

But, after a little digging, I did manage to salvage one card that I deemed worthy of a wrinkled Washington. Baseball cards and magazine covers are always a good combo, and this Joltin' Joe oddball further proves that point. It's a magazine cover that pictures Joe DiMaggio signing autographs on baseball cards...on a baseball card. 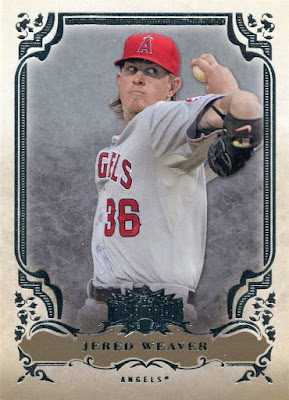 With my first purchase out of the way, I skipped down a few aisles to where my regular guys usually are, already visualizing the big stacks of cards I'd soon be bringing home.

When I got there, I found a woman selling a bunch of children's toys in the place where Ron's table is always located. For a second, I thought my brain was to blame. Wrong aisle? It's bound to happen in a gigantic flea market.

I weaved between people, in and out of aisles and found that my brain was right the first time. And that's when I realized that Ron wasn't in attendance yesterday. I know he occasionally sets up at the card show that siphons my birthday money (which was occurring yesterday), so I'm hoping this was a mere one-week hiatus.

So, yes, that was disappointing. But at least my other regular vendor was in attendance. He doesn't usually get many new cards in his dime boxes on a week-to-week basis, but I knew I hadn't seen this Triple Threads Jered Weaver before.

It's not every day you find such high-end material in a dime box. 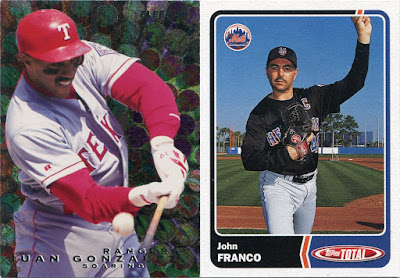 These are most definitely dime-worthy.

The '90s seemed to see a lot of insert designs with random colors and dots, and that Gonzalez was no exception. I've seen that Topps Total Franco during many past flea market trips, but, before yesterday, I hadn't noticed the captain's "C" on his uniform.

Save for Jason Varitek, I'd never seen that on a baseball card before. 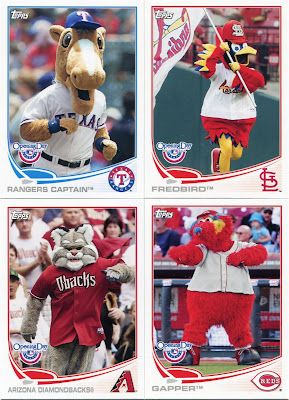 There were a healthy helping of 2013 Opening Day singles in this guy's dime box on Sunday.

While I'm set with most of the base cards, I couldn't resist dropping a few dimes on these mascot inserts.

Maybe this'll finally give me the push I need to really start advancing my mascot collection. 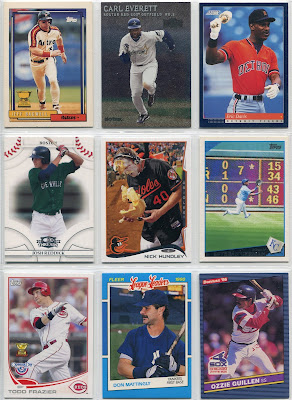 Here's a random sample of another nine singles I bought from this table.

The cards here aren't as important as the page itself. I say this because the big score of the day was getting my hands on over 80 Ultra-Pro pages from this guy for a mere eight bucks (or about half of the day's total purchases). I don't much care if pages are new or used, but these were basically top quality material.

At the start of last week, I was fresh out of pages. But, after this find and a generous gift of over 50 nine-pockets from Steve of "The Card Chop" earlier in the week, I'm set for a while now.

Pages, like so much else in this hobby, seem to come in droves. 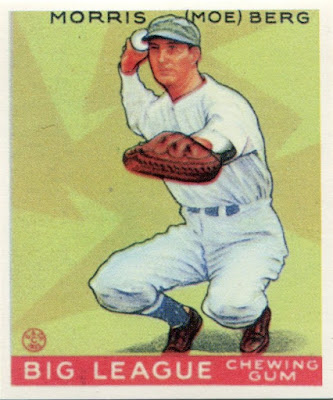 I did manage to stumble upon one new card vendor on Sunday.

The guy's box was simply labeled REPRINTS $1.00 EACH. Inside were a few dozen pages of old-time reproductions, about half of which threw it back to the days of Goudey.

Now, a buck per card is a little steep, and, had I had less self-control, things could've easily gotten out of hand. But, in an oddly good example of checking my emotions when it comes to reprints, I gave myself a five-dollar limit that I almost, almost stuck to. I ended up with six total, but, in the end, the guy only charged my five bucks anyways.

Yes, there were a fair amount of fairly big names up for grabs (Ruth, Gehrig, etc.), but I took a little different route with my selections. The way I see it, you can find Ruths and Gehrigs anywhere.

But how often do you find a card of Moe Berg, the famous WWII spy? 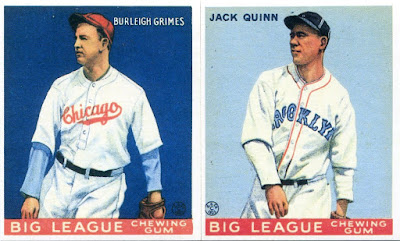 In a seemingly backwards way, I'd much rather drop a dollar on guys like these over the Ruths and Gehrigs of the world. 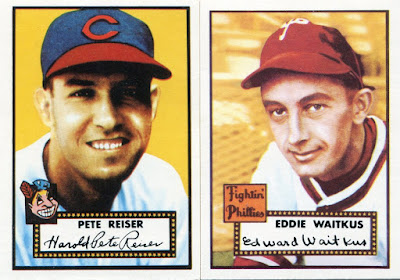 The other half of the reprints on display were all tributes to '52 Topps.

Again, I passed on the bigger names and chose to go with the more obscure guys. I think that's just my third Pete Reiser card, and only my second Eddie Waitkus.

Maybe I'll own the real ones someday. 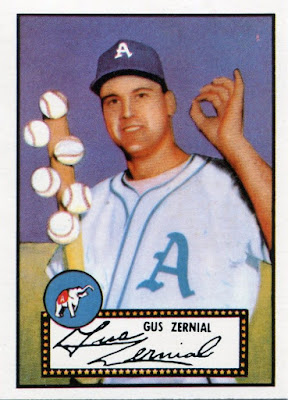 And speaking of wanting to own the real thing, here's a card I've had on my radar for a long time.

I haven't been lucky enough to track down an authentic '52 Topps Gus Zernial (yet), but I'll settle for the reprint for now. In a collection like mine where craziness reigns king, the A-OK Zernial might be the forefather.

I think I read somewhere that the six baseballs taped to his bat are a nod to Zernial's streak of hitting six homers in three games in '51.

But that still doesn't explain the pink undershirt. 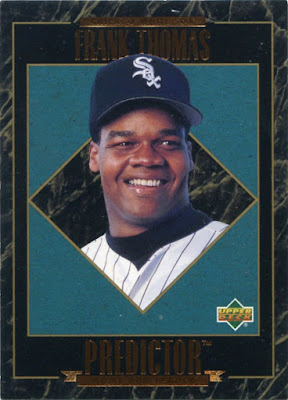 The last vendor of the day actually tracked me down as I was perusing the aforementioned reprints, urging me to come over to his table whenever I was finished.

I've bought from the guy a few times before, and I guess I made an impression. I headed over once I walked away with my fill of reprints.

When I got there, I saw a fairly big box sitting on the table. Trouble was, it was about 98 percent empty. There were maybe three dozen cards left in the thing, like it was ransacked or something. The guy informed me that whatever was left for 5/$1, and, yes, I did manage to salvage five good ones. 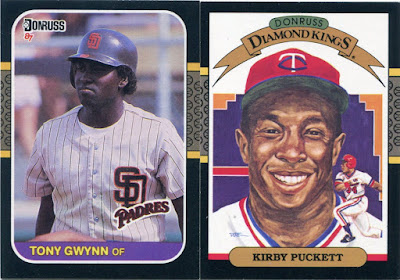 I was shocked to find out such a thing. 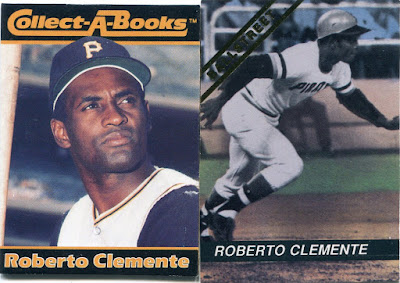 The Collect-A-Books Clemente was indeed a 5/$1 find.

The Ballstreet oddball, however, was located in a glass case (again, it looked like it'd been ransacked) at the other end of the guy's table.

It was originally priced at $3, but he gave it to me for a buck. 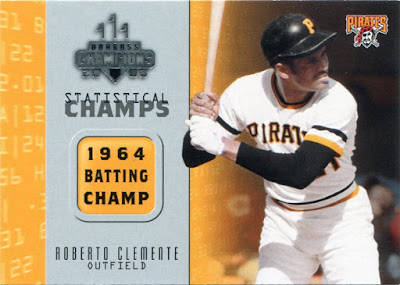 Same goes for this one, mine for a mere dollar.

And that just about did it for Sunday's haul. Without Ron there, I didn't exactly drive home with the usual giddy feeling I get after an afternoon in the flea market sun. Nothing too Earth-shattering. Still, after looking at these cards again, maybe I'm just spoiled.

When you add it all up, even a disappointing day at the flea market beats whatever the heck most people do on Sundays.
Posted by Nick at 6:40 PM

I wish I could find myself a nice big box of reprint singles like that; every dealer I've come across only sells those sort of things in sets. That Burleigh is definitely going on my want list!

3 Clementes and all those cool reprints,etc?...you ARE spoiled if that's not a good haul!!

Jack Quinn, one of the few men featured in both the T206 set AND the Goudey set.

Anytime a Clemente is a $1 it is worth it. Not a bad haul considering your favorite vendor was absent.

'95 was the best year of Predictor.

And is it me or does that Donruss Clemente look exactly like a certain Topps insert from 2014?

At least you have a flea market!

Wow. Love those reprints. And the mascots are awesome too. Your disappointing days are my dream days at my local flea market. I have a lot of competition when I go out there. A few years ago, I'd find all kinds of deals. These days, I know of at least two other guys who look for cards each Sunday. We all start at different ends, so it's kind of luck of the draw.

"The Catcher Was a Spy" is a must read book for any WWII and/or baseball nut. I wish there were more Moe Berg cards out there in the world.

And you may now be jealous of me because I own that 1952 Zernial card. But a reprint is just as perfectly goofy.