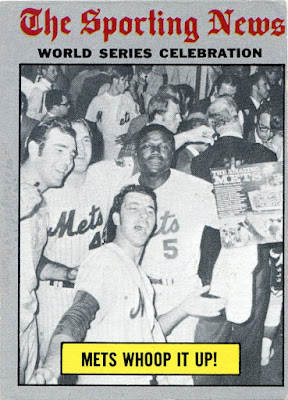 So, for the first time in recent memory, the Mets are actually playing good baseball here in 2015.

Here's hoping that they can stick around for the entire year because, the way I see it, baseball is a lot better when the Mets have a decent team on the field.

My dad (a big Yankees fan) wouldn't like me saying this, but I've always preferred the "Amazins" over their crosstown rivals. I've forgiven them for edging out the Cubbies for the pennant back in 1969. (For the most part.)

As it turns out, the Mets easily have one of the most star-studded "Short Term Stops" teams around, and I think it might be my single favorite squad to this point. This, in fact, may have been the most difficult roster to piece together because of the sheer number of unfamiliar stints they've had over the years.

But here goes nothing. 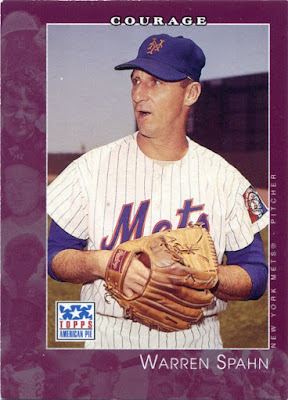 We begin with the first of a few future Hall of Famers you'll see on this squad.

Warren Spahn spent 21 illustrious years in the big leagues. The first 20 of those seasons (and the first 356 of his 363 career wins) were spent with the Braves. His final season, ironically, was split between two teams, the Mets and the Giants.

As will become painfully evident throughout this post, the Mets have had a tendency to grab washed-up stars off the scrap heap in their history, hoping said stars would recapture their past glories. Warren Spahn was one of the first of these failed experiments.

Not exactly the best finish to a Hall of Fame career. 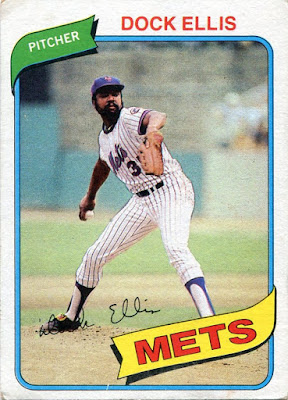 Dock Ellis was one of the more colorful figures in baseball history, but you probably know that already.

Dock was on his last legs by the time the groovy '70s were coming to a close, splitting his final season (1979) with three different squads. The second of those teams was the Mets. After ten games with the Rangers, Ellis went 3-7 with a 6.04 ERA in Flushing before being purchased by the Pirates, ultimately ending his career where it all began in Pittsburgh.

I've always found Dock's 1980 Topps sunset issue to be a little strange, in that he didn't actually finish the 1979 season with the Mets. The back of this card does indeed list his brief three-game stint with the Pirates to close out his final year. I guess Topps couldn't snap a shot of him in the black-and-yellow, and they ultimately decided to list him as a Met.

And, if you haven't yet, go watch the Dock Ellis documentary immediately. 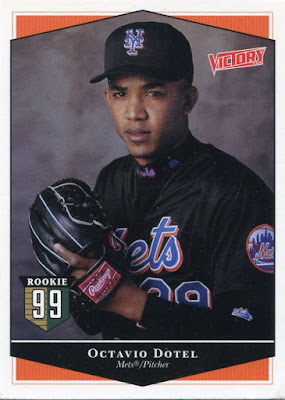 Octavio Dotel was destined for "Short Term Stops" greatness from the beginning.

Dotel, as you might know, played for 13 different teams during his 15-year career, a big league record. The first of those franchises was the Mets, where he'd go 8-3 with a 5.38 in 19 games, primarily as a starter. (He'd achieve much of his later success in the bullpen.)

Though he was regarded as a fairly high-level prospect at the time, the Mets decided to deal Dotel to the Astros at the end of the season.

The trade sent the later, well-traveled events of his career into motion. 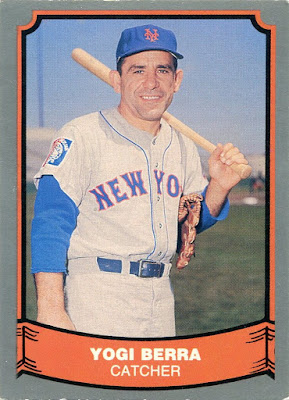 I can't decide whether I love or hate the fact that Yogi Berra came out of retirement to play in four games for the '65 Mets.

I hate it for the fact that, had it not been for those four games, he would've been one of those select greats to have played for a single team throughout his entire career. But, then again, Yogi as a Met is one of the more legendary images in "Short Term Stops" history.

Berra would later become more deeply ingrained in Flushing lore by managing the team from 1972-75 (including an NL pennant in '73), but he was a career Yankee when he joined the Mets as a coach in 1965. In what I have to imagine was at least partly a publicity stunt, Yogi played in four games early in the '65 season, going 2-for-9 with a run before hanging them up for good.

It still might be the most entertaining catching stint in Mets history. 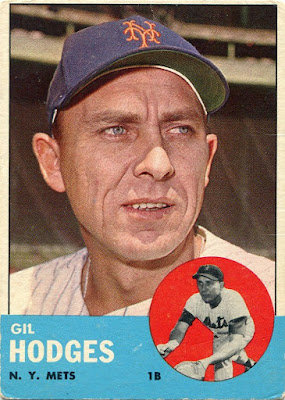 Like Yogi, Gil Hodges would later become better known as a Mets manager rather than a player.

Before leading the famous '69 Amazin' Mets to a World Series championship as a skipper, Hodges played in two subpar seasons with the club in 1962 and '63, hitting just .248 with nine homers in the pair of injury-plagued years.

Though it was well before my time, I imagine it must've been tough to watch once-great stars like Hodges fumbling along with those horrible expansion Mets teams of the early '60s. 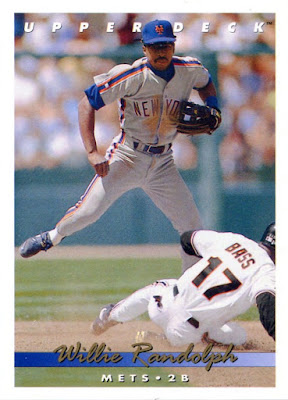 Not until I started researching this post did I realize how many future Mets managers enjoyed brief (and often unspectacular) stints with the club. Yogi, Gil, and now Willie Randolph.

Randolph had a few good years at the helm of the Mets (including a 97-win season in 2006) before basically being run out of Flushing. What sometimes gets lost to history is the fact that he actually ended his playing career as a Met, hitting .252 in 90 games in what would turn out to be his final season in the bigs in 1992.

At least he got a nice "turning two" shot from Upper Deck to close things out. 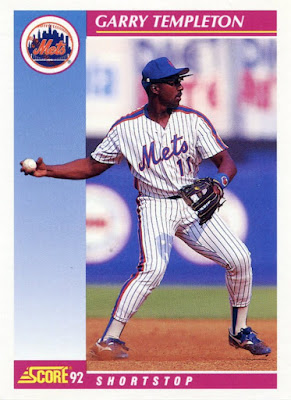 Though he enjoyed a successful 16-year career, Garry Templeton might be best known as the guy who the Cardinals traded for Ozzie Smith.

After ten years with the Padres, Templeton was traded to the Mets during the 1991 season, hitting just .228 in what would turn out to be the final 80 games he'd ever play in the majors.

I feel a little bad for relegating a good ballplayer like him to one moment, but...Templeton for Ozzie Smith? 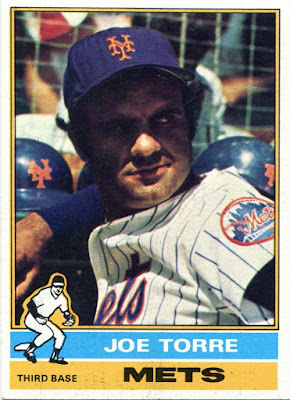 Still, I didn't have anyone nearly as good to plug into the third base slot in my binders, and, besides, Torre as a Met is most definitely unfamiliar. Joe had some decent moments with the Mets, but perhaps his most well-known was the time he hit into four double plays in a single game in 1975.

Of course, he'd later have a little more success with that other New York team. 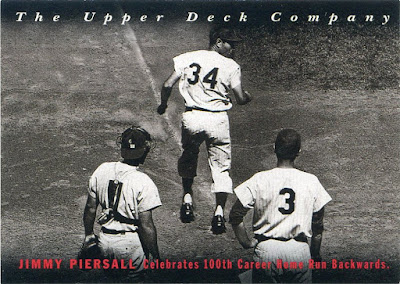 I've probably seen thousands and thousands of pictures during my years as a baseball fanatic, but this has remained one of my absolute favorites.

Jimmy Piersally famously battled with mental illness during his long career, and you have to wonder if that played a role in his decision to run the bases backwards when he hit his 100th homer on June 23rd, 1963. (That is, he physically ran backwards with his back to the plate, not running third-second-first-home as I believed for so long.)

Another interesting tidbit is the fact that Piersall's 100th homer was actually the only one he hit as a New York Met. He played in just 40 games with the team (sandwiched between stints with the Senators and Angels) and was released a little over a month after his infamous trip around the bases.

But, thanks to this quirky moment in time, he'll always be at least partially remembered as a Met. 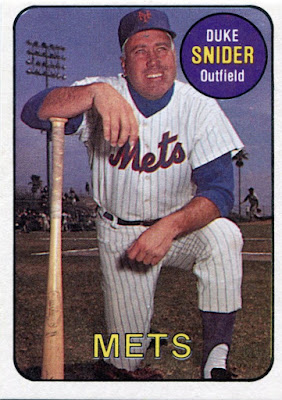 Duke Snider joins the class of washed-up stars from the early days of the Mets.

After 16 legendary years with the Dodgers, Duke hit just .243 with 14 homers during his only season in Flushing, far below his usually sparkling numbers. (Though he was elected to the All-Star team during his only year with the Mets.)

He'd finish his career with the Giants the following season (like Spahn, a stint of which no cards exist that I know of) and eventually be elected to the Hall of Fame in 1980.

Like it or not, he'll always have the New York, N.L., 1963 designation on his Cooperstown plaque. 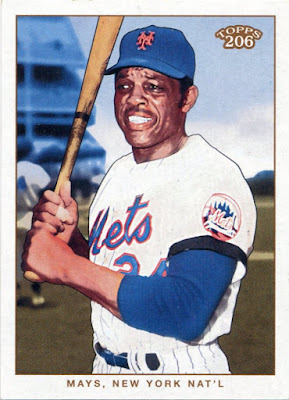 We close with one of the more (in)famous unfamiliar uniform images in baseball history.

Willie Mays is a Giant. Bar none. He easily became one of the Top 5 players in baseball history during his time with the Giants. But those two pesky seasons with the Mets sure do get in the way sometimes.

Though he was a valued veteran presence with the pennant-contending Mets teams of the early '70s, "The Say Hey Kid" was a shadow of his former self in his waning years. He hit a paltry .238 with 14 homers in two injury-riddled seasons with the club.

He joined Babe Ruth (Boston Red Sox/Braves) and Hank Aaron (Milwaukee Braves/Brewers) as the only players to end their careers in the same city in which they began, but with a different club (New York Giants/Mets).

There's unfamiliar uniforms, and then there's Willie Mays as a Met.

We'll be taking a look at the Mariners in the next edition of "Short Term Stops."

Thanks for stopping by.
Posted by Nick at 6:53 PM

I enjoy these posts

I didn't realize Preston Wilson only played 8 games for the Mets.

Great post! I always enjoy these Short Term Stops posts, but especially so when it's my team. There were a few players (like Piersall) where I said "I can't believe I didn't think of him...."

By the way, you created some work for me. My initial reaction when I saw the Spahn card was "How have I missed this awesome card?!?" At that point I went to add it to my American Pie wantlist, realized I didn't have one and said "How do I not have an American Pie wantlist?????" I started going about tracking down a checklist so I can see what I need and create a wantlist. So thanks for that... I think.

Totally agree with Mr. Hoyle. This series is awesome! How the heck did I miss Garry Templeton playing on the Mets?

Great job, Nick. Was shocked you didn't give the nod to Orel at RHP since he won his 200th game as a Met. Still, hard to argue with any of your choices.

Crazy that Sheffield hit his 500th in '09, doesn't feel that long ago.

"As will become painfully evident throughout this post, the Mets have had a tendency to grab washed-up stars off the scrap heap in their history, hoping said stars would recapture their past glories "

Thank you for not putting Jim Fregosi and his 146 games at third base. We Mets fans are still a little sensitive about that. B^)

If you had done this a year or two later, though, you could have put Juan Uribe there.