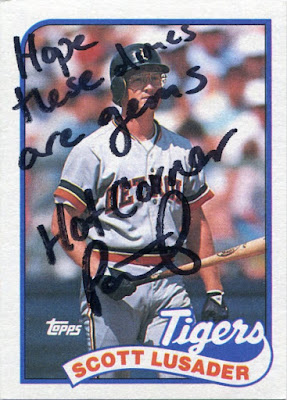 If you looked on the back of my Little League baseball card, you'd see quite the numbers of a classic good-field, no-hit ballplayer.

I wouldn't say I was terrible at the plate, but I was more of a slap hitter than anything. Mostly singles with the occasional double or triple mixed in. I don't believe I hit a single homer during my five years of Little League. (I'd probably remember if I did.)

My skills more or less came on the defensive side of the game. I was usually one of the best fielders on my teams, and, while I probably played every position at least once (including exactly one inning each as a pitcher and catcher), I was mostly a second baseman and outfielder.

Looking back, the one spot I wish I'd had more experience with is third base. It's not called the "hot corner" for nothing, and, even in a game of ten and eleven-year-olds, third did seem to see the most action.

In case the card up there didn't give it way, all this Little League reminiscing came courtesy of Pat of the great blog "Hot Corner Cards," a man who decided to drop a surprise flat-rate box of cardboard on me recently.

I'm not normally an advocate of scribbling on your cards, but, then again, how else are you going to spice up a 1989 Topps Scott Lusader? 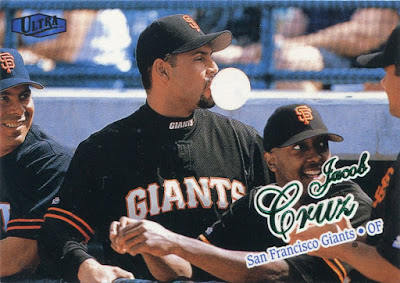 Pat hoped that there'd be some gems in this batch, and, if this massive bubble of bubble gum is any indication, the masterpieces were indeed plentiful.

Flat-rate boxes are always, always a pleasure to dig through. 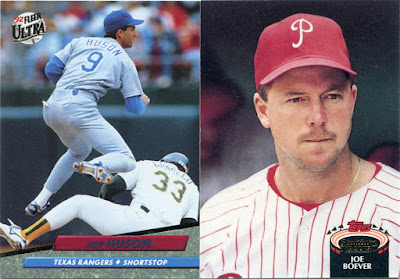 The mini-collection train took off right away.

Double dips and throwbacks kicked off the fun, although I apologize for the sight of Jose Canseco on that Huson turning two shot. 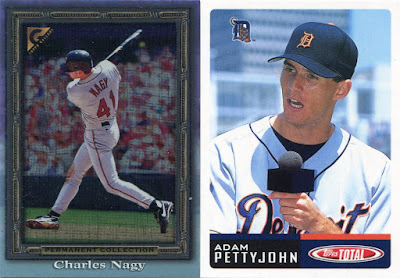 Pitchers at the plate and interviews abound.

Seeing Topps Total a trade package makes me all giddy. 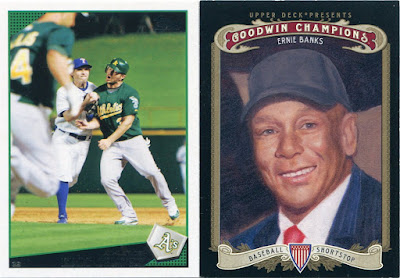 Pat veered off into the world of quirky and flat out strange with the next part of this box.

The Chavez is one of the many gems from 2009 Topps that I missed the first time around. I love everything about it. The odd camera angle, the hustle from Mark Ellis, the rare runner-fielder collision, the hill in center field. All of it.

The Banks...not so much. Upper Deck managed to make Mr. Cub look like either a) an umpire from the 1920s, b) a skin-tinting Sammy Sosa type, or c) both.

It just plain scares me. 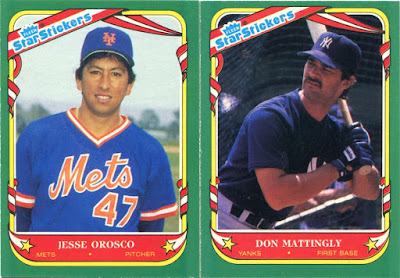 I'd like to get onto some less freakish cards, if that's okay with you.

From the looks of it, Pat knows that 1980s oddballs are one way to win my heart. 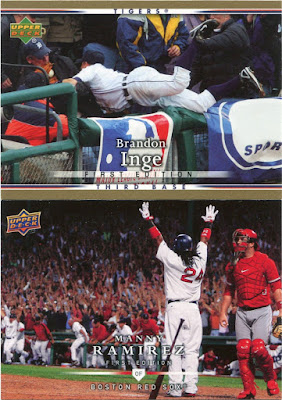 First Edition versions of two of the best cards Upper Deck ever produced.

The Inge has to be one of the finest "hot corner" shots out there. 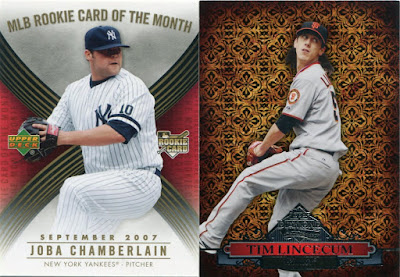 These two inserts were exclusive to hobby shops, which means that I didn't see them until much, much after their original release dates.

Maybe I'll open my own card shop one day to make sure that kids don't have to wait 5-10 years to get cards like these. 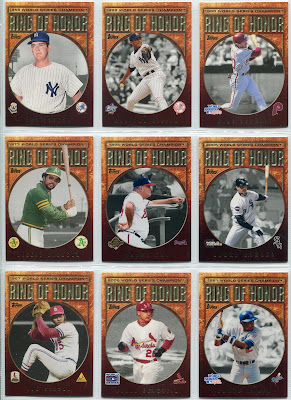 One of the team bags Pat included was almost exclusively stuffed with late-2000s Topps inserts.

I wasn't exactly a pro at creating want lists at that time, so a lot of cards I needed from that era passed me right by. These "Ring of Honor" inserts included. The design isn't anything special, but the player selection is gloriously diverse for an insert set.

You've got the big stars like Mariano Rivera and Reggie Jackson, but you'll also find the likes of Aaron Rowand and David Eckstein in the mix. And, after seeing that Bobby Cox, I'm left to wonder how many manager insert cards I own.

It can't be many. 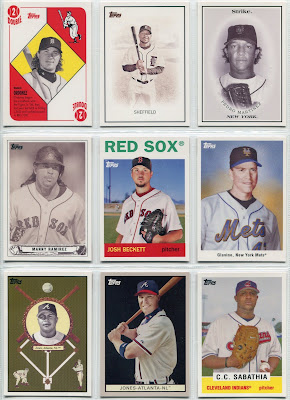 This is where I really start to get angry at my ignorance as an adolescent collector.

Like the "Ring of Honor" inserts, I almost completely ignored Topps's "Trading Card History" series when they originally hit the shelf. Why, I'll never know. This isn't your standard new-players-on-old-Topps-designs thing.

While a few of these cards do indeed pay tribute to older Topps sets (like the Josh Beckett), the vast majority honor old oddball designs, quite a few of which I've never even seen before. And, yet, somehow this set flew right over my head back in 2007.

I'd like to go punch my fifteen-year-old self right about now. 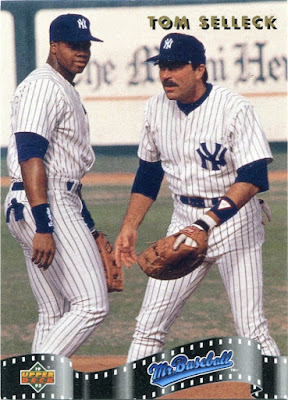 Though I don't think he knew it, Pat wound up sending me a card that'd been high on my want list for a long, long time.

Upper Deck released this Tom Selleck insert to coincide with the release of his (then) upcoming film, Mr. Baseball. It's a movie I've seen several times, and, while I wouldn't put it in my Top 10 list of baseball films, it's still worth a watch if you haven't already.

Selleck is shown as an over-the-hill Yankee first baseman early on in the film, one who eventually gets sold to Japan when an up-and-coming rookie takes his job. That rookie, as seen on this card, is played by none other than Frank Thomas.

Baseball cards and cinema don't cross paths very often, but, when they do, they're nothing short of fantastic.

Now, if only someone would get going on that Henry Rowengartner card (or whatever his name is).
Posted by Nick at 5:04 PM

I never hit a home run either, although I did hit a couple triples.

In my baseball playing days, my only redeeming quality was my eye. In 7th grade, my batting average was under .100 but my OBP was damn near .700. Thankfully, my father/coach was an early support of sabermetrics and had me at leadoff.

Also, I second that movement for a Gardenhoser card!

I hit four homeruns (all in the same year), including a grandslam and a solo shot in the same game. Yes, you do remember them.

The Selleck is awesome! Epitome of cheap cool cards.