Into the Sunset, Pt. 31: Kent Tekulve 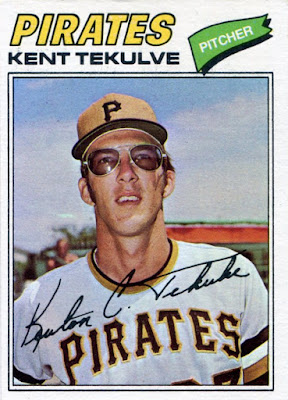 I feel like these sunset posts have been a bit one-sided lately.

The last handful I've written were all focused on star-studded Hall of Famers. While it's fun seeing how the cardboard careers of big names came to a close, there's more than enough room in this series for those who weren't lucky enough to reach Cooperstown.

A lot of my sunset collection is devoted to the more fan-favorite icons of baseball history, and, in some ways, looking at their final tributes is even more of a blast. Take Kent Tekulve, for instance.

"Teke" isn't what you'd call a big name, but I'm sure most baseball fans can recognize the sidewinding reliever at the drop of a hat.

He's the one with the Coke-bottle specs and the million-dollar smile. 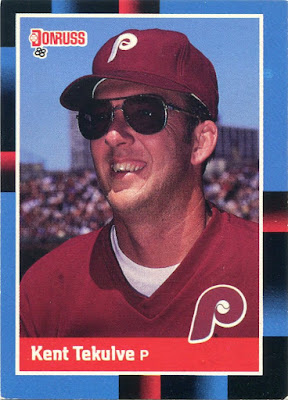 Although Tekulve is most famous for his years with the groovy "We Are Family" Pirates clubs of the 1970s, his big league career lasted until the late '80s.

His sunset cards come from both 1988 and '89 seasons. Teke wasn't included in the 1989 Donruss checklist despite having pitched in 70 games with the Phillies (with a 3.60 ERA) the year before.

The card you see above goes down as his final tribute from Donruss, and, despite the underwhelming design, it's good to see that Tekulve was still sporting those same shades and that same goofy smile.

He brought a little '70s charm to even the most atrocious sets of the overproduction era. 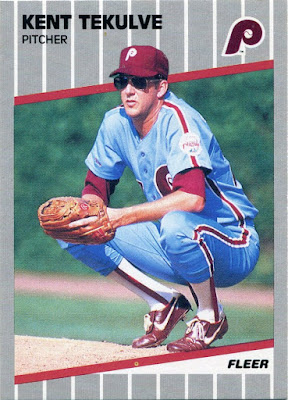 Kent Tekulve, sadly, doesn't have any "true" cardboard finales that I know of (more on that in a bit), so his 1989 issues take their place in my sunset collection.

Teke is one of those rare individuals who never seemed to have a bad baseball card. That said, if I'm being completely honest, this '89 Fleer issue isn't much of a gem. It's not a particularly captivating shot, and Mr. Tekulve doesn't look too pleased with himself.

I feel like someone should photoshop a toilet onto this photo. 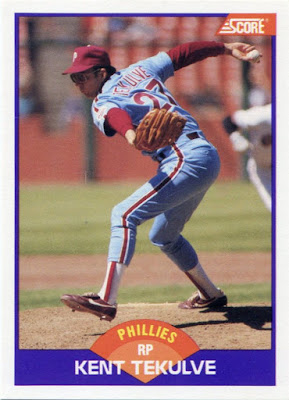 Score was only in its second season of production in 1989, but, as evidenced by this fantastic shot, they knew their way around the photography business.

Teke's action cards are by far his finest. 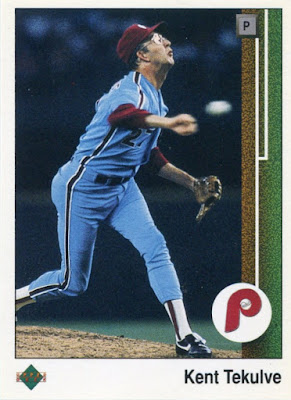 What you see here is probably one of the all-time sunset greats.

Upper Deck famously made its debut into the card scene in 1989, and it was cards like these that instantly catapulted them to the top tier of the industry. Whereas Score merely snapped a shot of Tekulve's windup, UD actually got one at the point of release from that crazy sidewinding delivery.

I'm not sure that Teke was much of a hard thrower in his later years, but that ball looks like it's going about 234 miles per hour. 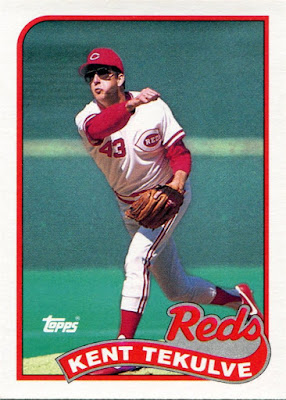 Photographically speaking, Tekulve's 1989 Upper Deck issue beats this one a hundred times out of a hundred.

But, all things considered, I think the uniform puts this particular card over the top in Teke's sunset countdown. His 1989 Topps Traded issue is the only one I own of him as a Cincinnati Red. (I only know of one other Reds card of his, which I don't have...yet.)

Tekulve pitched in 52 games with the '89 Reds, going 0-3 with a mediocre 5.02 ERA. It would turn out to be his final season. I have to admit that I didn't even know he was ever a Red until I acquired this very card, and the sheer oddity of the sight blew my mind.

Still, even when he was on his last legs, Kent Tekulve wouldn't part with those massive Coke-bottle shades.

One of my all time fave players!!
https://youtu.be/apdjJPEvdqY

If I have any regrets from my road trip, it is that I didn't seek out a card shop in Cincinnati (or thereabouts) and try to load up on Kahn's cards....

I am happy to own a slightly improved version of that '89 Topps card... http://redcardboard.blogspot.com/2014/10/ttm-goodness-tekulve-redus-foster.html

Love Teke! Happy to see him getting a Fan Favorites auto in 2015 Archives.

Tekulve is cardboard gold. No matter the team he makes for a great card. Like Gavin, I'm also excited to see him in this years Archives.

Gotta love a good Teke card. He used to be an excellent TTM guy too -- probably still is.

I'm always reminded of his appearance in the World Series film where he threw a pitch and fell on the mound. The pitch was a strike, so the announcer says "Even when he's pitching on his face...."