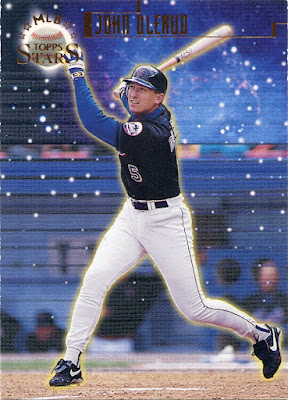 So, yeah, Archives is out and the entire collecting world is in a fit.

Archives has always been a bit of a controversial set, but it sure seems like this year's edition is causing more of a groundswell than in the past. The the card stock issues, the SSPs this issue, that issue. Leave it to Archives to fire people up, that is, if card collectors are the crowd that can get fired up. (I'm hating them right along with the rest of you.)

I invite people to take a step back this evening and join me in calmly viewing some cards that are totally not Archives. No, these are pieces from trades I made with a couple great members of our blogging brethren.

The first comes from my buddy Jeff of the top-notch blog "2x3 Heroes." Jeff and I have swapped cards in-person a few times, but he chose to go the postal route for this envelope, one that included the "rare" John Olerud you see above. 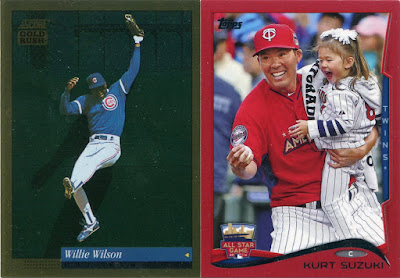 Jeff joined the mini-collection parade with these two. 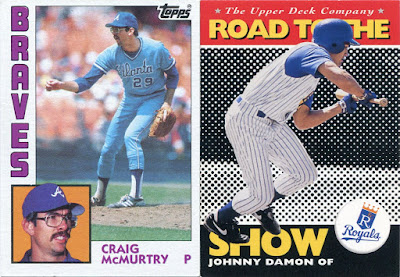 Jeff is the "bunting" guy of the blogosphere, but I think some people get the two of us confused.

I seem to get bunting cards in the mail quite often, even though I've never officially declared it as a mini-collection. It's one of the few things I don't collect (yet), but I'm happy to take any extras that come my way. That Damon has quite the '90s vibe to it.

And does Craig McMurtry remind anyone else of Lewis Skolnick from Revenge of the Nerds? 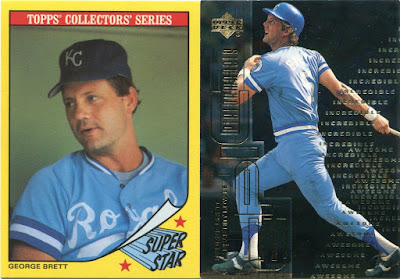 My George Brett collection has probably increased about five times over in the last year or so. 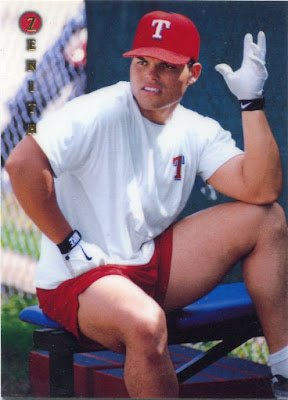 That's way too much skin for a baseball card. I'm guessing Jeff sent this one to be because of the sheer awkwardness of the shot.

Little did he know... 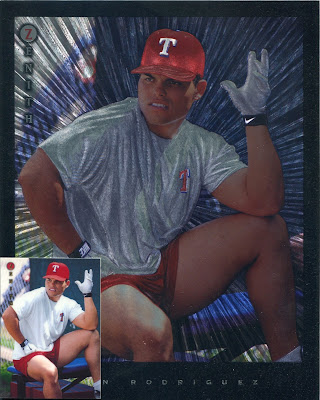 ...that I've had a mega-sized version of it in my collection for years.

I somehow obtained this gigantic, shiny Pudge Rodriguez when I was a kid, and it's been hanging around ever since.

At least the standard-sized version isn't as haunting. 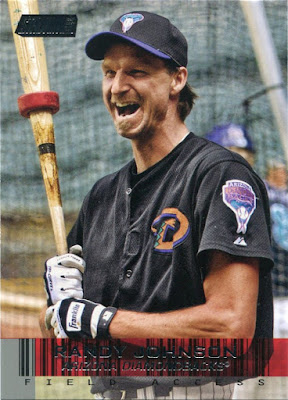 Our second batch of cards came over the span of two PWEs from Brian of the terrific "Highly Subjective and Completely Arbitrary" blog.

Brian is a relative newcomer to the blogosphere, but he's quickly made his mark with terrific blog content and fantastic trade packages. I requested this Randy Johnson "Field Access" insert (from 2014 Stadium Club) from him a little while back. It was a must-have card for a few reasons. 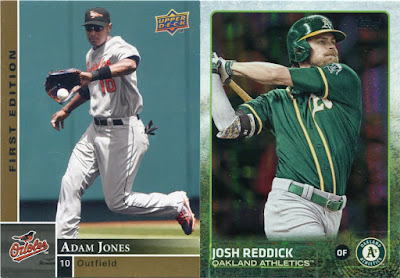 Brian was nice enough to toss a few others in, presumably so the Big Unit wouldn't get lonely during his travels.

These two are both welcome additions to couple of my newer player collections.

And speaking of Adam Jones... 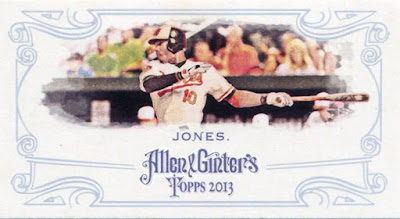 ...this A&G mini was at the heart of a second PWE Brian sent not too long after.

Unlike the other envelope, this one was completely out of the blue, and we all know that surprise cards are the best cards. 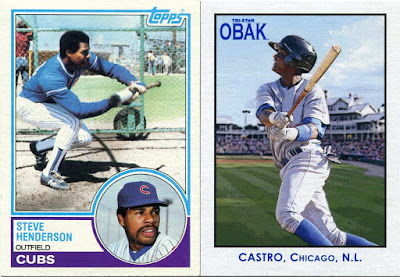 Here's a couple Cubbies for the hometown crowd.

The Henderson is a fantastic shot (yep, bunting) from the 1983 Topps checklist, and one that I hadn't seen prior to this PWE. Obak works a hundred times better with the older ballplayers, but I'm not turing down a card of Starlin Castro from his 2010 rookie season.

Although I'm not sure he'll be a Cub for much longer, honestly. 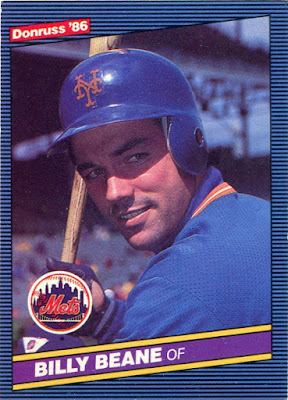 This was my favorite card from Brian's second PWE, and a former Dime Box Dozen need, at that.

I recently made it a goal to get every card of Billy Beane from his playing days, which isn't much of a task considering he only has about three or four out there.

Beane's story as a failed prospect-turned-scout-turned-GM has been well-publicized with the Moneyball book/movie (both excellent, by the way). This '86 Donruss rookie, as far as I can tell, is Beane's only major-brand card as a Met, which makes sense since he played in just 13 games with the club during a two-year span (1984-85).

It's always satisfying to capture another Dime Box Dozen suspect with the help of people like Brian.

No gimmicks, no cash grabs, no complaining here, sorry. I mean, how could anyone get riled up at fantastic cards like these?

Unless you hate Revenge of the Nerds, I see no reason to rant about this post.
Posted by Nick at 4:46 PM

Digging that Wilson and the Stadium Club Randy Johnson is awesome! I wonder if he's smiling or if he's cackling, about to crack that bat over someone's head and should be added to a second installment of your horror series.

I liked Revenge Of The Nerds, so no ranting from me.

That is the exact reason I sent you that Pudge. It's the perfect "What the hell" image on a baseball card that belongs in one of your binders.