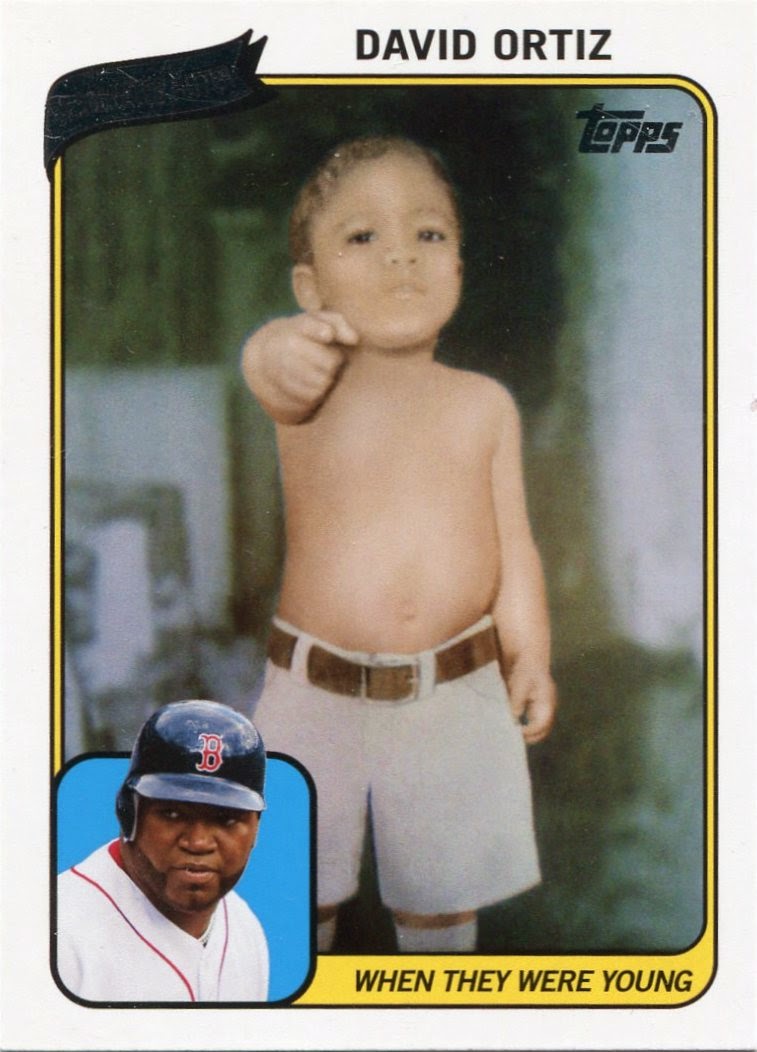 Since I'd never previously attended either of the two shows I hit on Sunday, I had to mentally prepare myself for possible disappointment.

I tried not to get my hopes up. For all I knew, these shows could've been two guys with overpriced '88 Topps boxes in a dark room. I wasn't expecting to come up empty, but I had to be ready for the worst.

Thankfully, as I've shown in these first two card show posts, that didn't happen. A quick peek into the well-attended hotel room of the first gathering made the thoughts of disappointment fly out the window.

Much like little Big Papi there, the confidence was growing before I even hit the first table. 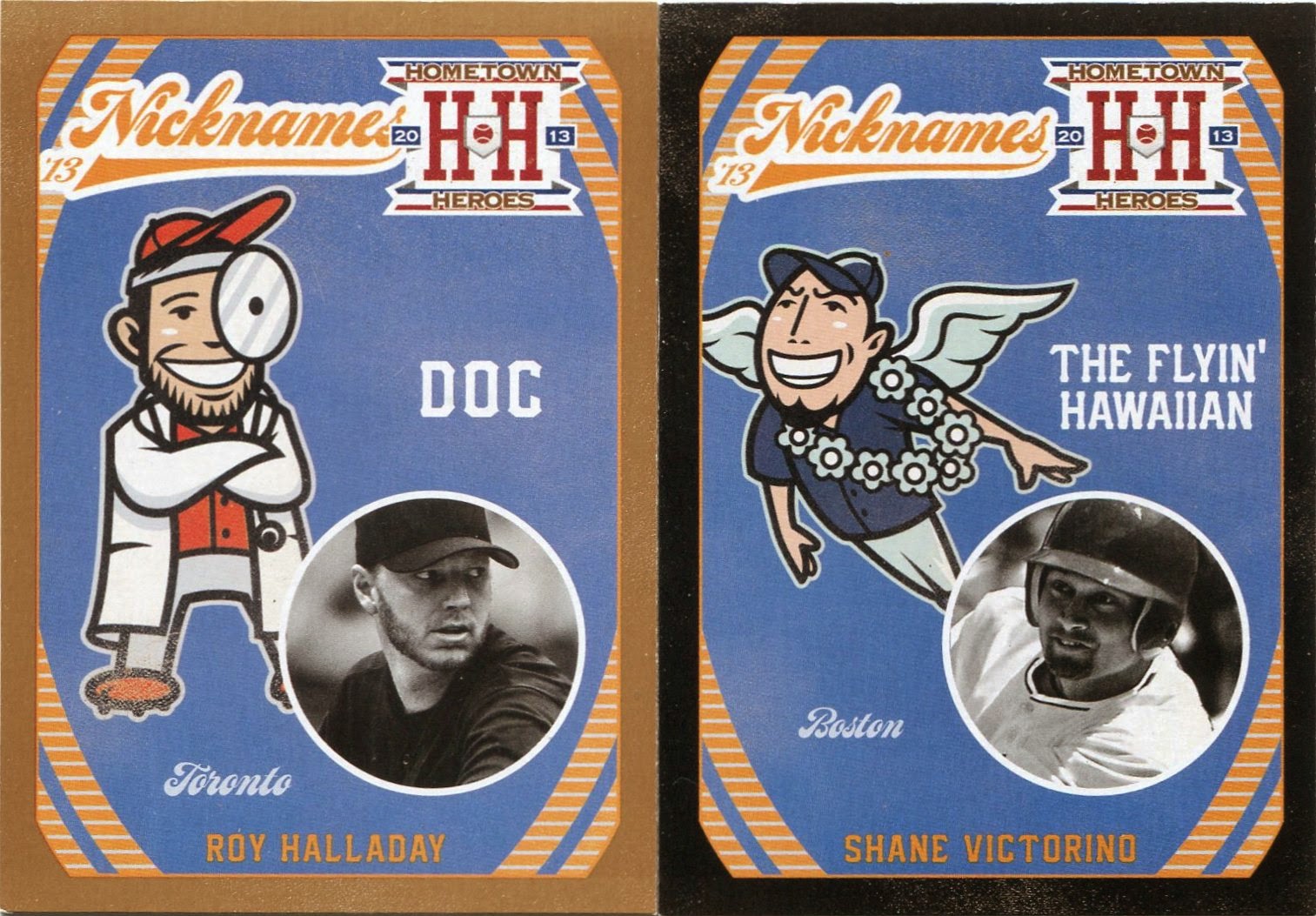 I've said this before, but these smaller kinds of shows are way, way better for lower-end collectors like myself.

Don't get me wrong. I love huge shows like the National and everything, but I end up bypassing about nine out of every ten tables at those because I'm not in the market for a lot of what's on display.

There were probably about fifteen vendors at first hotel show I attended on Sunday, and I think I bought cards from around ten of them. And about seven or eight of those ten had dime boxes for me to pick through. My wallet breathed a sigh of relief.

Most of what you'll see in this post, including the Papi and these two fantastic "Nicknames" inserts, came from the dime depths. 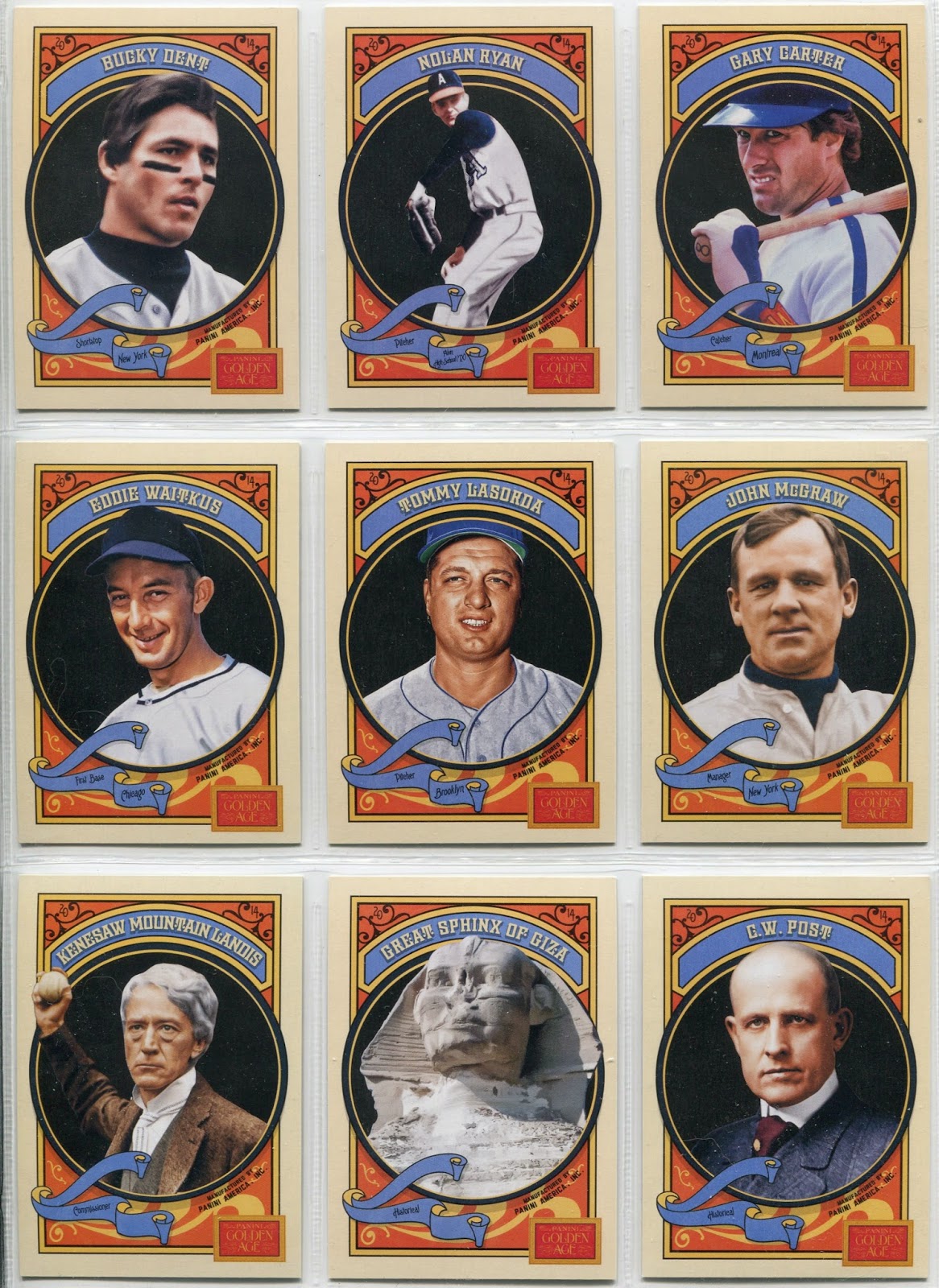 I seem to be one of the extreme few Golden Age fanboys around.

That's fine with me. As long as Panini keeps churning this set out, I'll keep buying it. And as long as vendors keep putting them in dime boxes, I'll keep handing over my loose change.

Look at the diversity in this page alone. Nolan Ryan as a high schooler. My first card of Eddie Waitkus. Tommy Lasorda as a player. And, to top it all off, the Great Sphinx of Gaza. 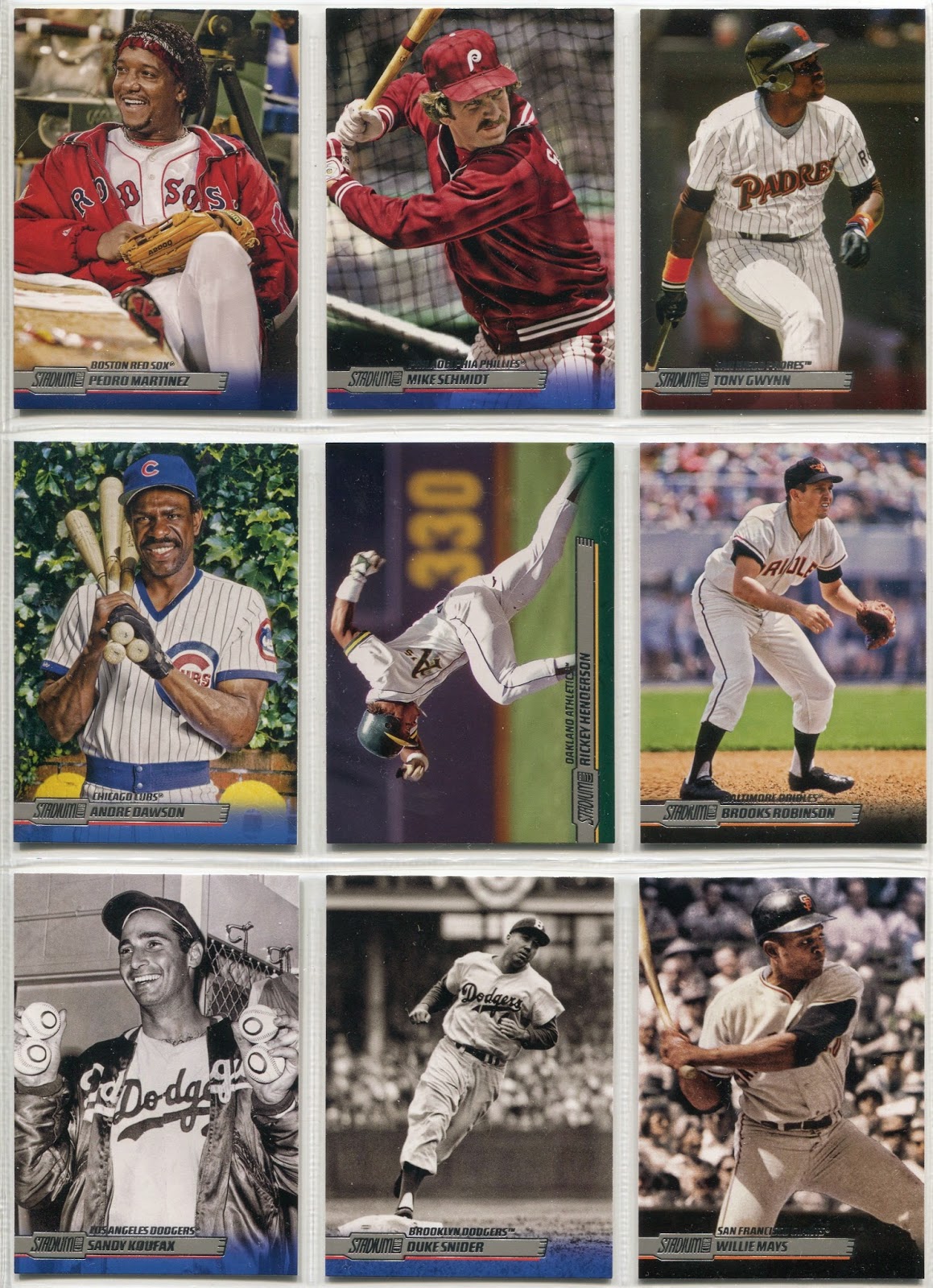 It's becoming easier and easier to find Stadium Club on the cheap.

Aside from the Mays (which was in a 5/$1 bin), these were all dime box pickups. It's not like these are mid-range guys, either. These are huge names here, all Hall of Famers.

Maybe they'll turn up in a dime box at the next show. Heck, even parallels from Stadium Club are starting to trickle into the dime boxes.

Every single one of these rainbow foils were dime fodder. The ultra spectacular holofoil Victor Martinez in the middle (I don't know the official name of that parallel set) is actually numbered to just 25 copies.

I think the vendor might've missed that one. I doubt it was supposed to be dime box material. 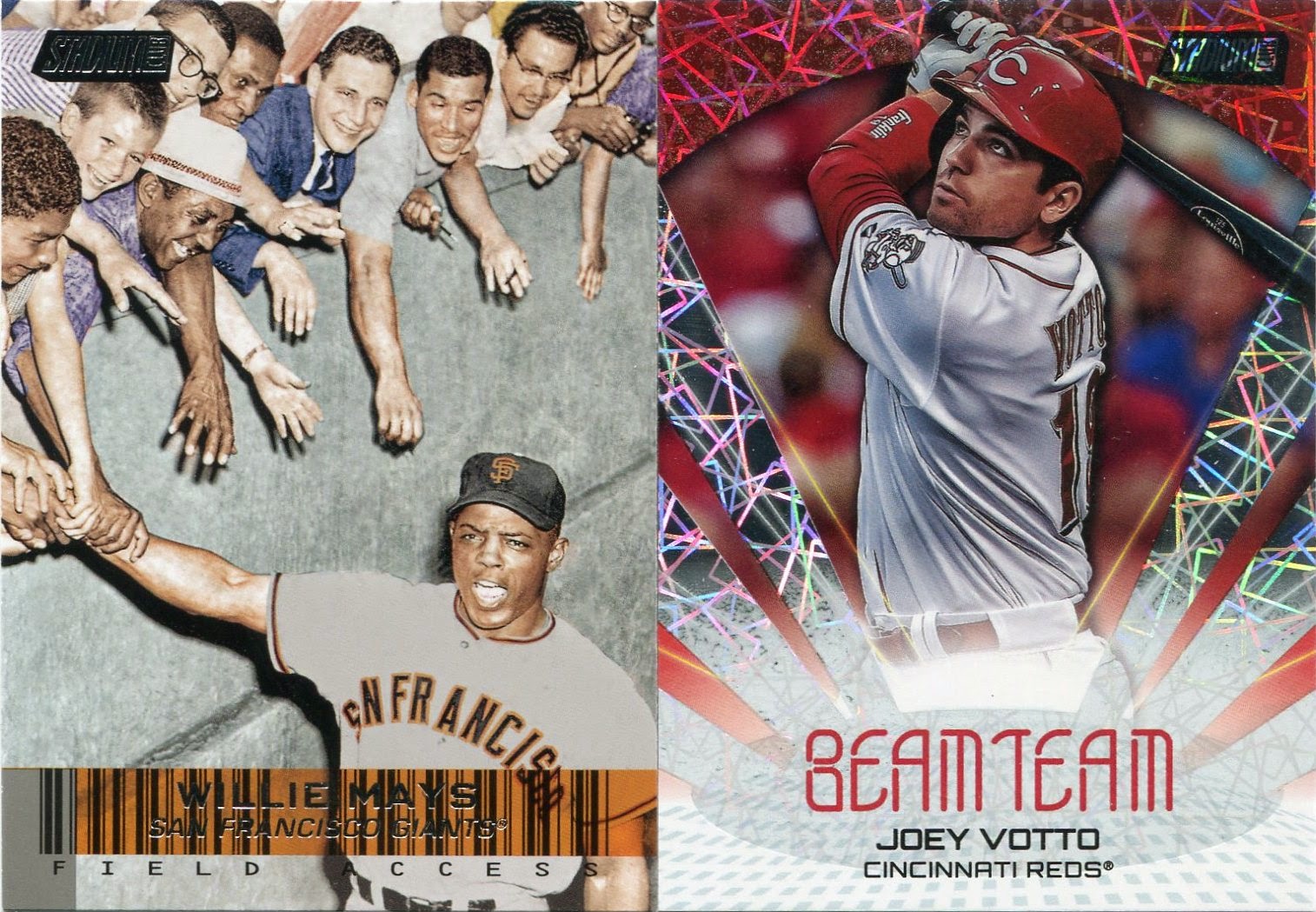 Card shows are a great example of how strong the "latest and greatest" factor is in this hobby.

It seemed like everyone was singing Stadium Club's praises a few months ago. I didn't see a single Stadium Club insert when I attended a card show back in November of last year, right after the set had hit the shelves.

Now, people seem eager to unload them on the cheap to make way for the next big release. 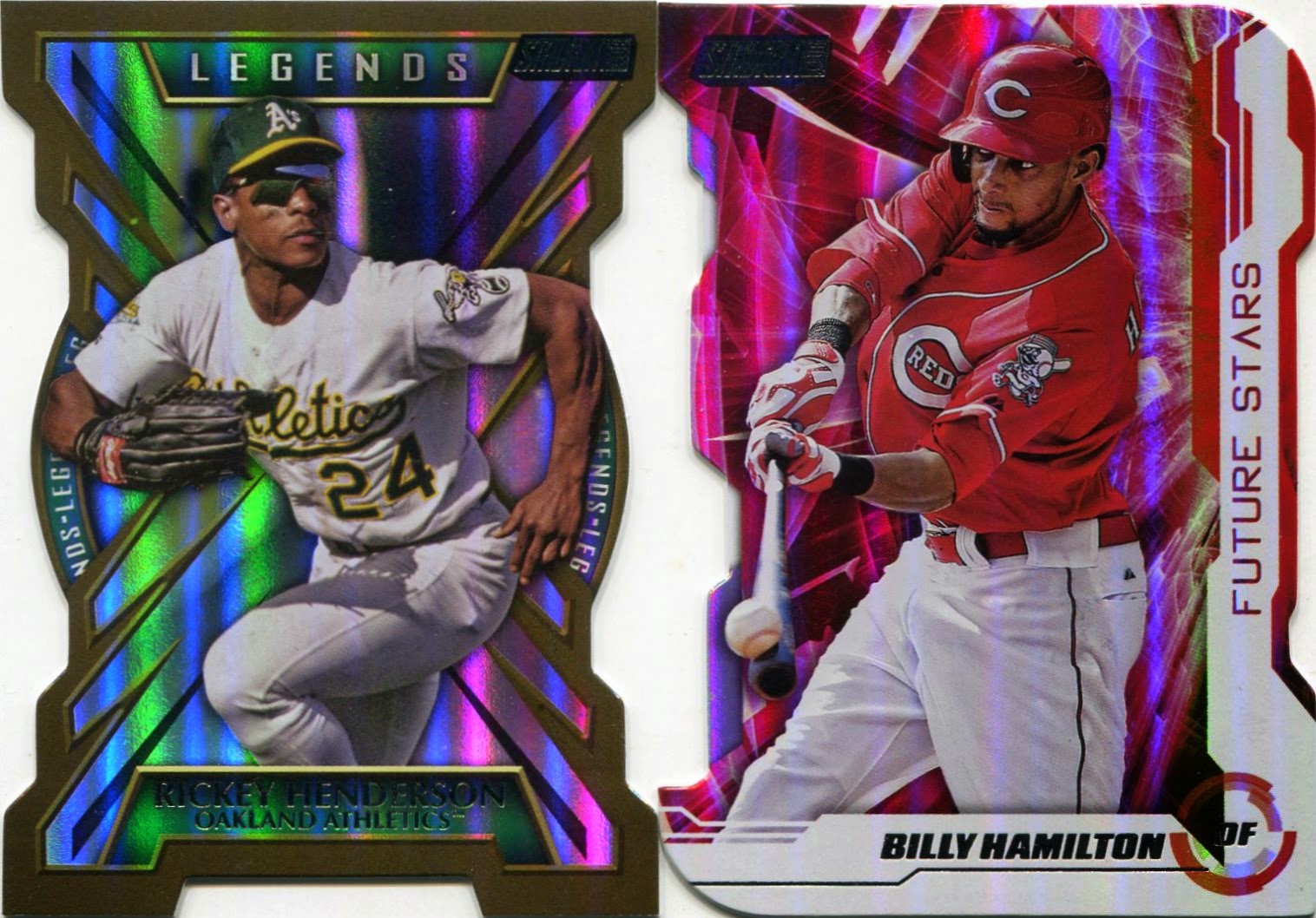 Rickey was also a 5/$2 culprit, while Mr. Hamilton was a dime box suspect.

Maybe I'll be finding these in nickel boxes when 2015 Stadium Club hits the shelves.

I'm guessing 2014 will really be a distant memory by then. 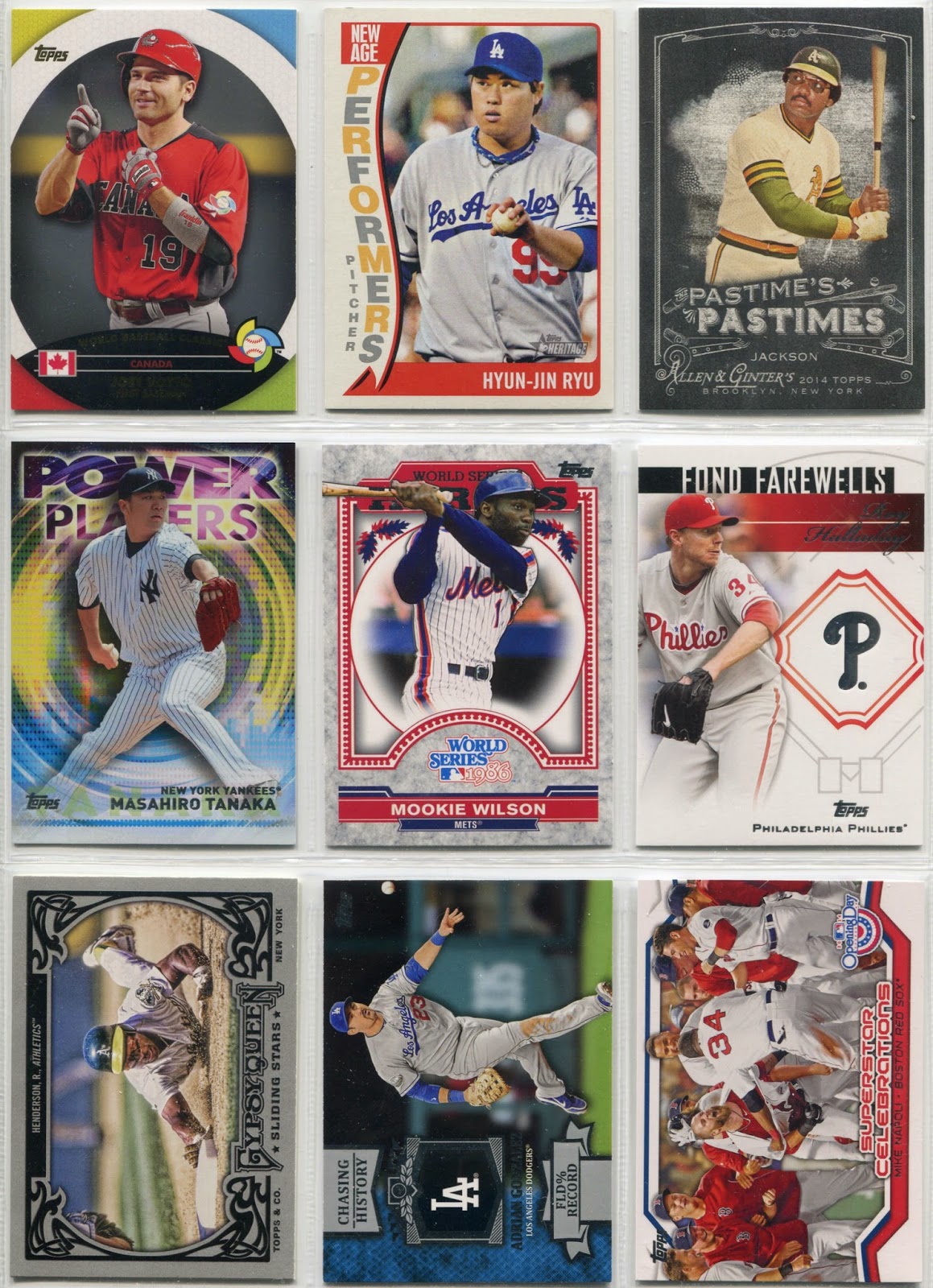 I picked up a lot of cardboard in bulk on Sunday, which is why you've been seeing so many scans of nine-pocket pages.

As opposed to what usually happens, common threads ran through a lot of what I bought. These all knocked out various needs, and every single one came from that insert-crazed dime vendor I praised in my previous post.

Yes, Tanaka cards are making their way to the dime boxes now. 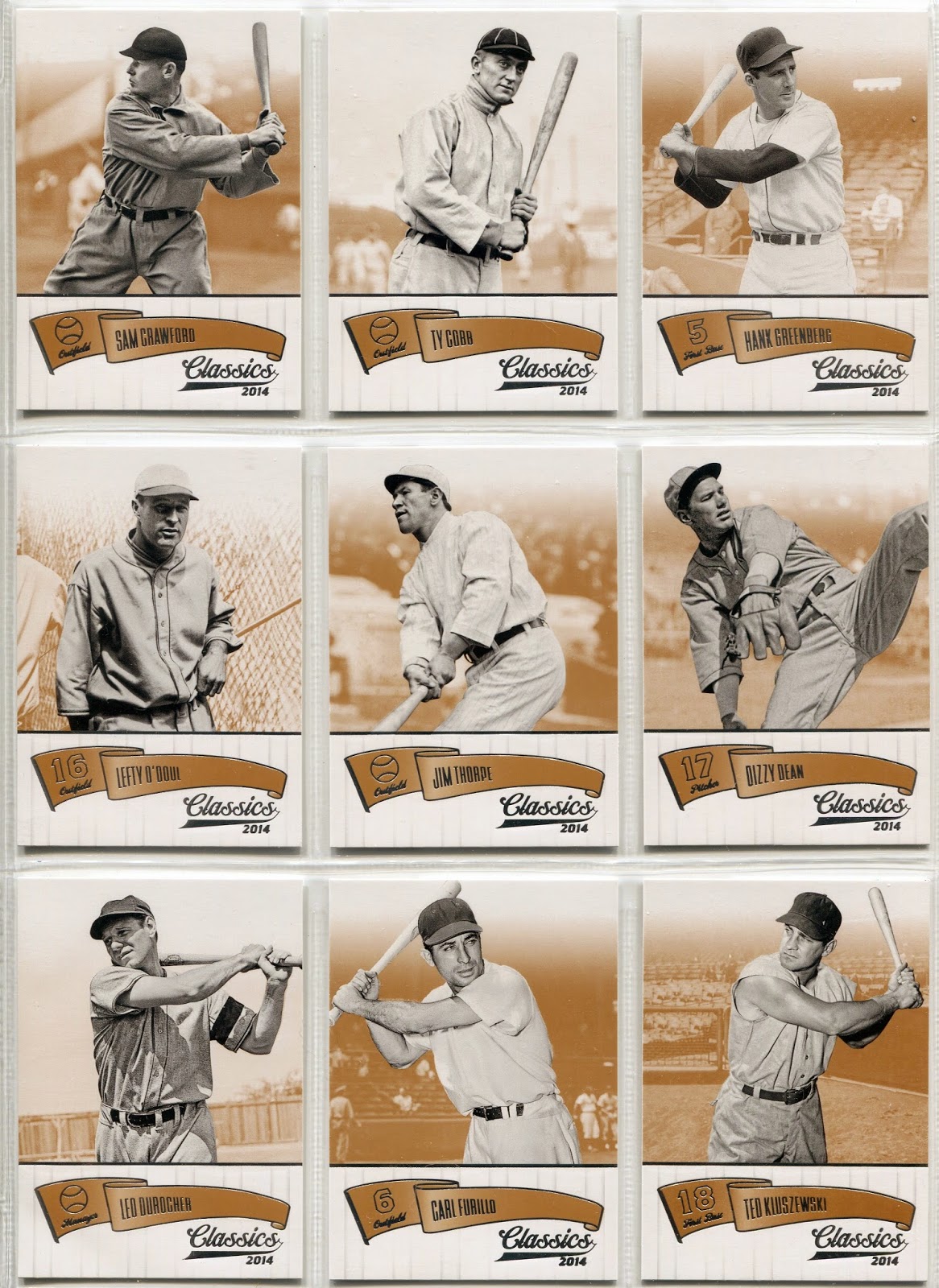 While many of that guy's boxes were indeed inserts galore, he did have some base cards up for grabs.

I dug up a budding stack of 2014 Panini Classics midway through one of my digs. Before Sunday, I thought the show I attended back in February pretty much took care of all my wants from this set.

Unbeknownst to me, guys like "Wahoo" Sam Crawford, Jim Thorpe, and Dizzy Dean were still flying under the radar.

And I'm sure there's still quite a few left to chase. 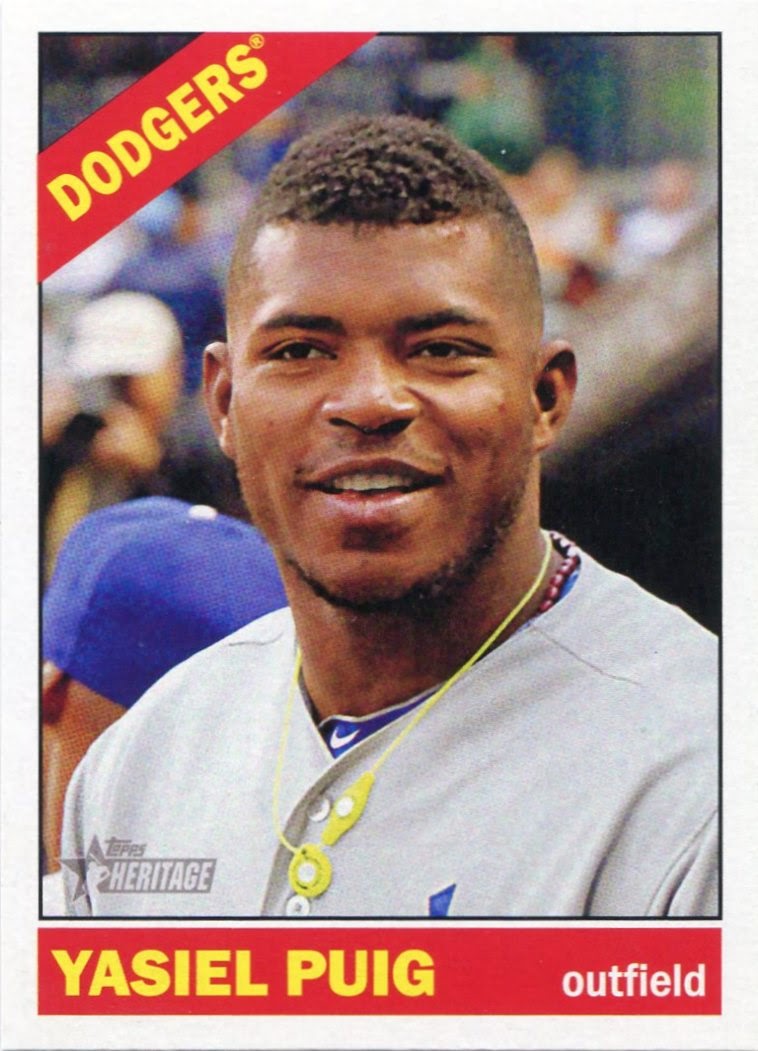 If there's one thing I thought I'd never find in a dime box, it was a Yasiel Puig short-print. Those are easily five, ten-dollar cards, right? Right?

Apparently not. Oddly enough, I nabbed this from a vendor who didn't have a great selection. I think I only ended up buying ten dime cards off of him, but Yasiel was one of them.

While I'm both excited and floored by this particular find, 2015 Heritage SPs weren't my main focus on Sunday. The base cards were the real story. Going into the afternoon, my one big hope was to score some cheap Heritage base.

Question: Did my prayers come true? 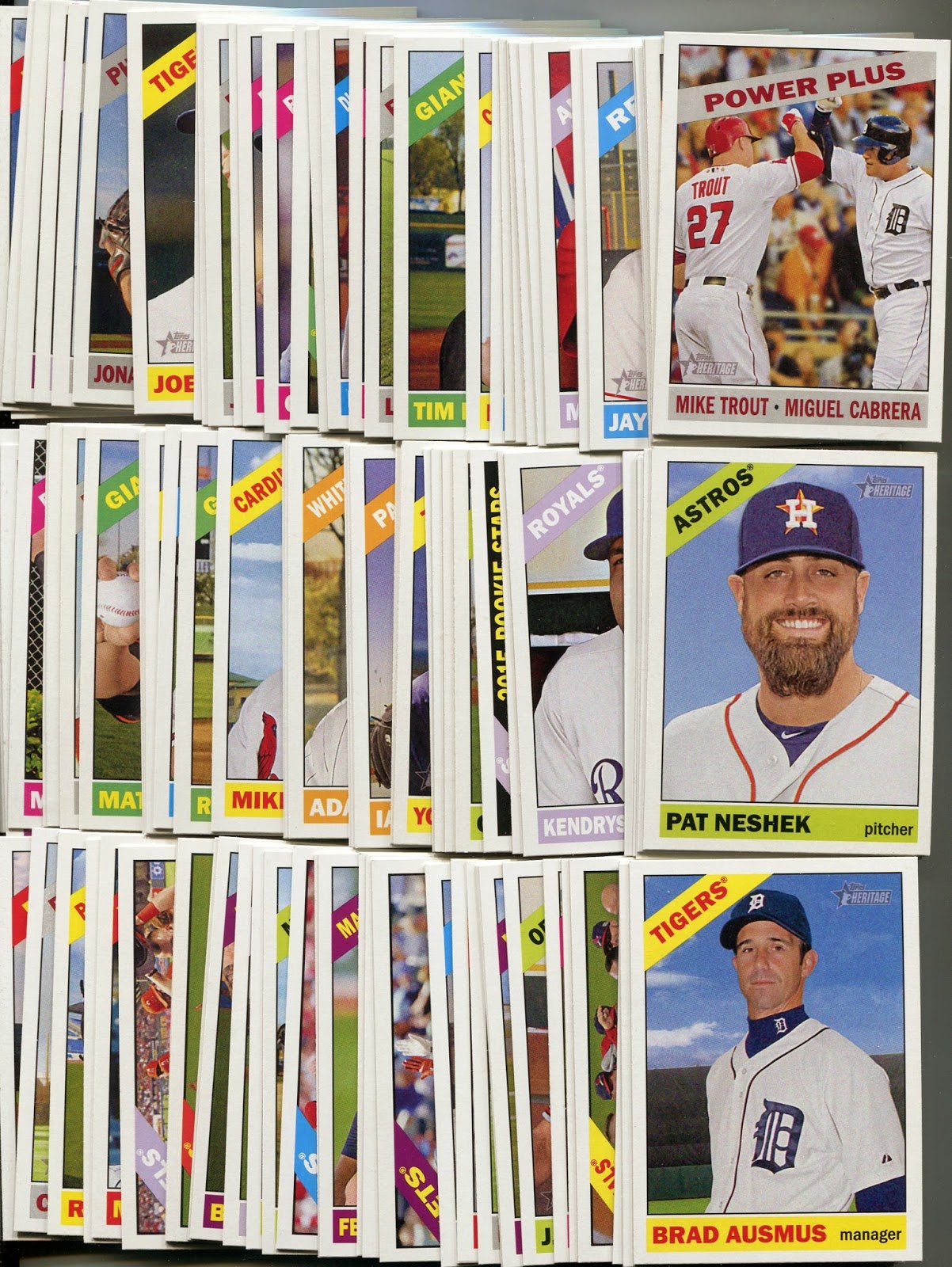 One of the vendors near the middle of the show had two huge 3200-count boxes of 2015 Heritage base on display. My eyes lit up when he told me everything was a dime a pop.

I ended up spending about a half-hour at his table going through it all, knocking out about 90 percent of my Heritage base needs in the process. Damage? Eleven bucks.

That's 110 hand-picked base cards for the price of two rack packs.

Or half the cost of a blaster, if you'd like to look at it that way. 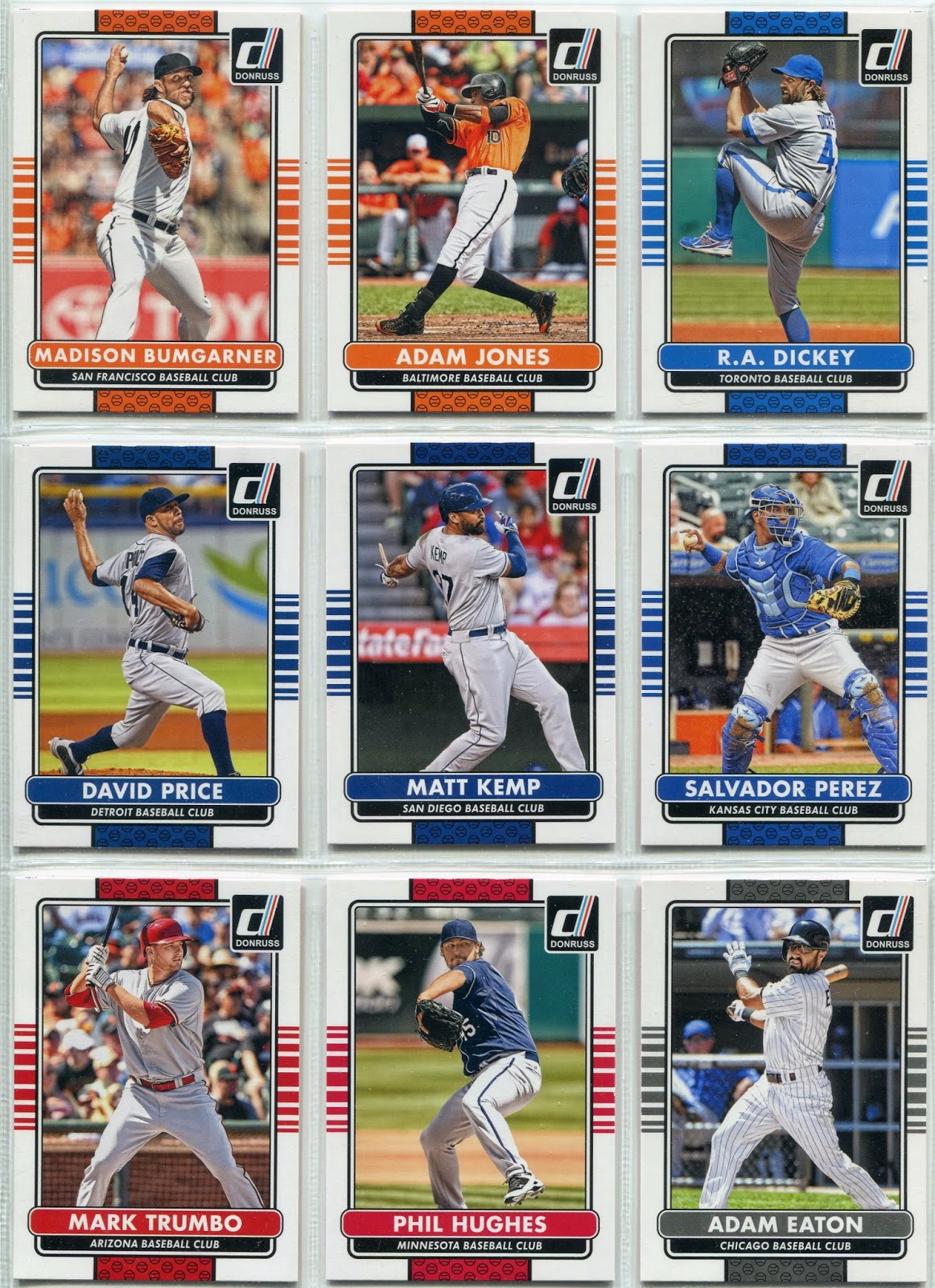 All right, let's get the elephant in the room out of the way.

Yes, I bought a handful of 2015 Donruss singles. No, I don't like this set. At all. It might be worse than the 2014 edition, a feat which I honestly thought was impossible.

And, just like last year, Donruss base cards are going straight from the pack and into dime boxes. I think these only came out a couple weeks ago. No waiting required.

I could've bought a lot more of these things (they were everywhere), but I gutted it out and only picked up the singles I needed for my top-tier player collections. And, if there is a light at the end of the tunnel, that Kemp is a broken bat shot.

So it's got that going for it. 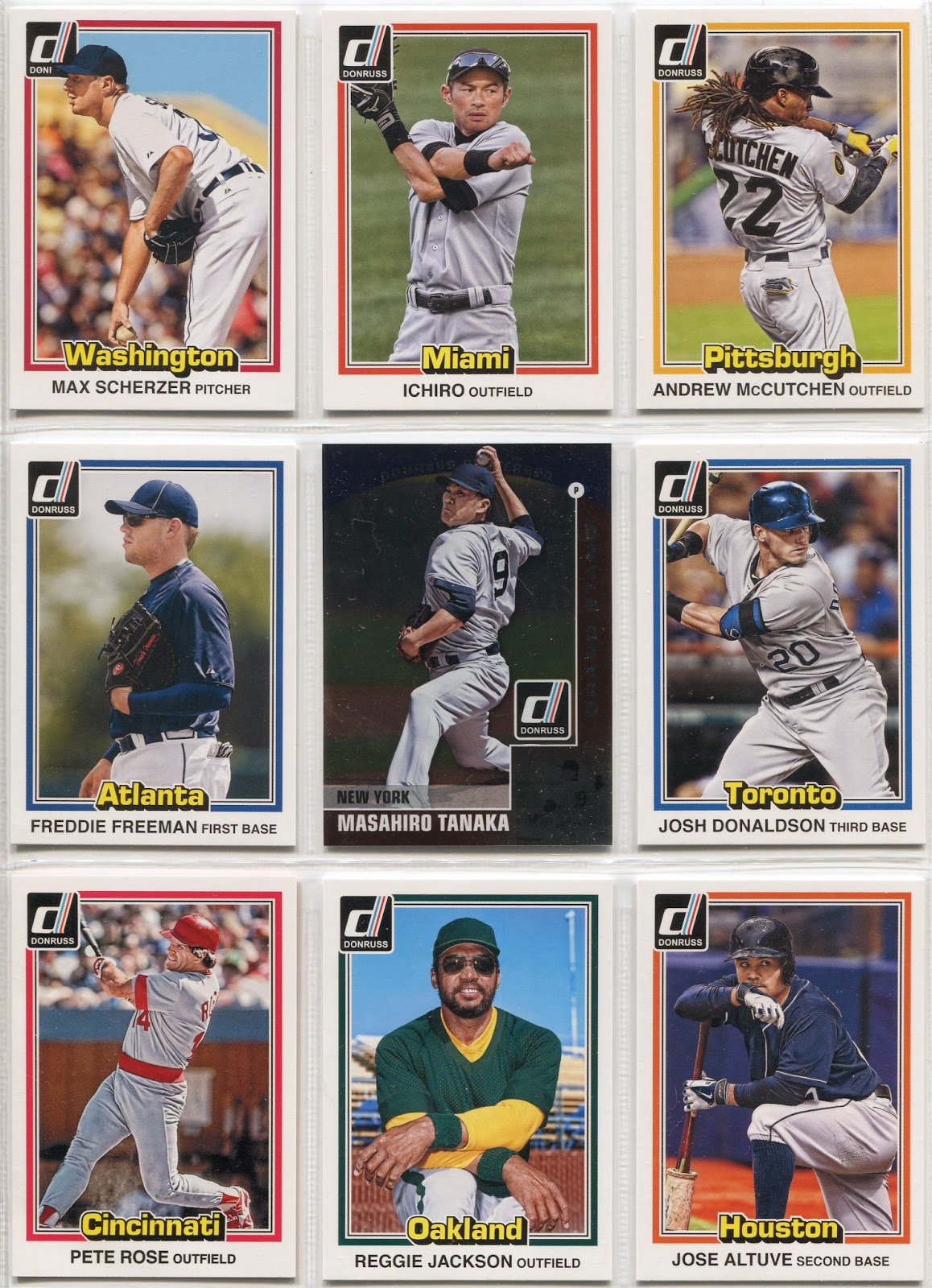 But do I actually like them? Or do they just look a lot better juxtaposed next to the base card disaster area? I'm still not sure.

And, again, that Donruss Preferred Tanaka insert (are people really clamoring for a Preferred revival?) was a mere dime.

I basically doubled my Tanaka collection in the two hours it took me to browse Sunday's show. 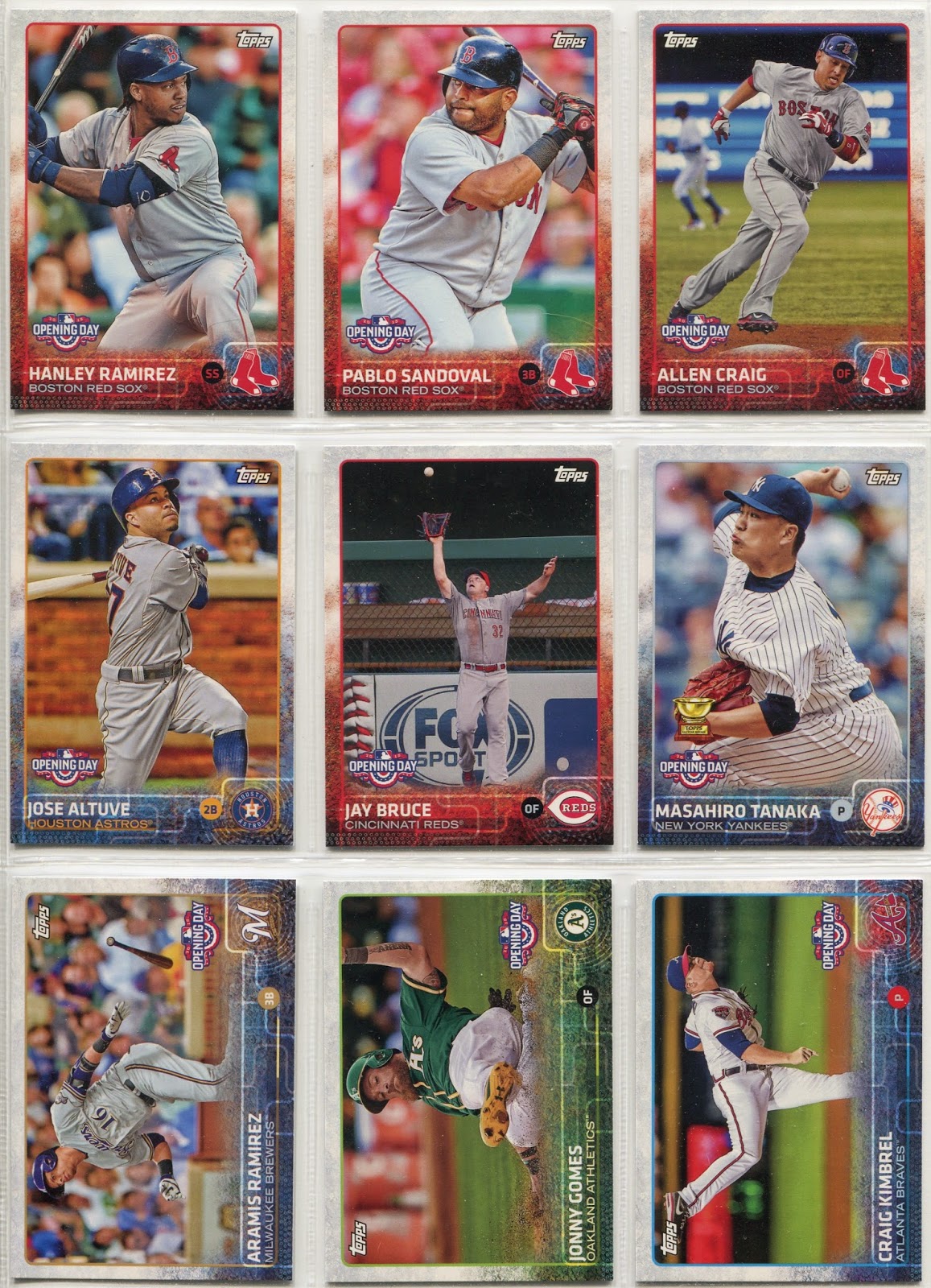 Not quite. These were actually nickel box material. They came from the same vendor who had those nickel Heritage High Numbers on display. I think I ended up knocking out about a third of my Opening Day wants for a couple Washingtons. 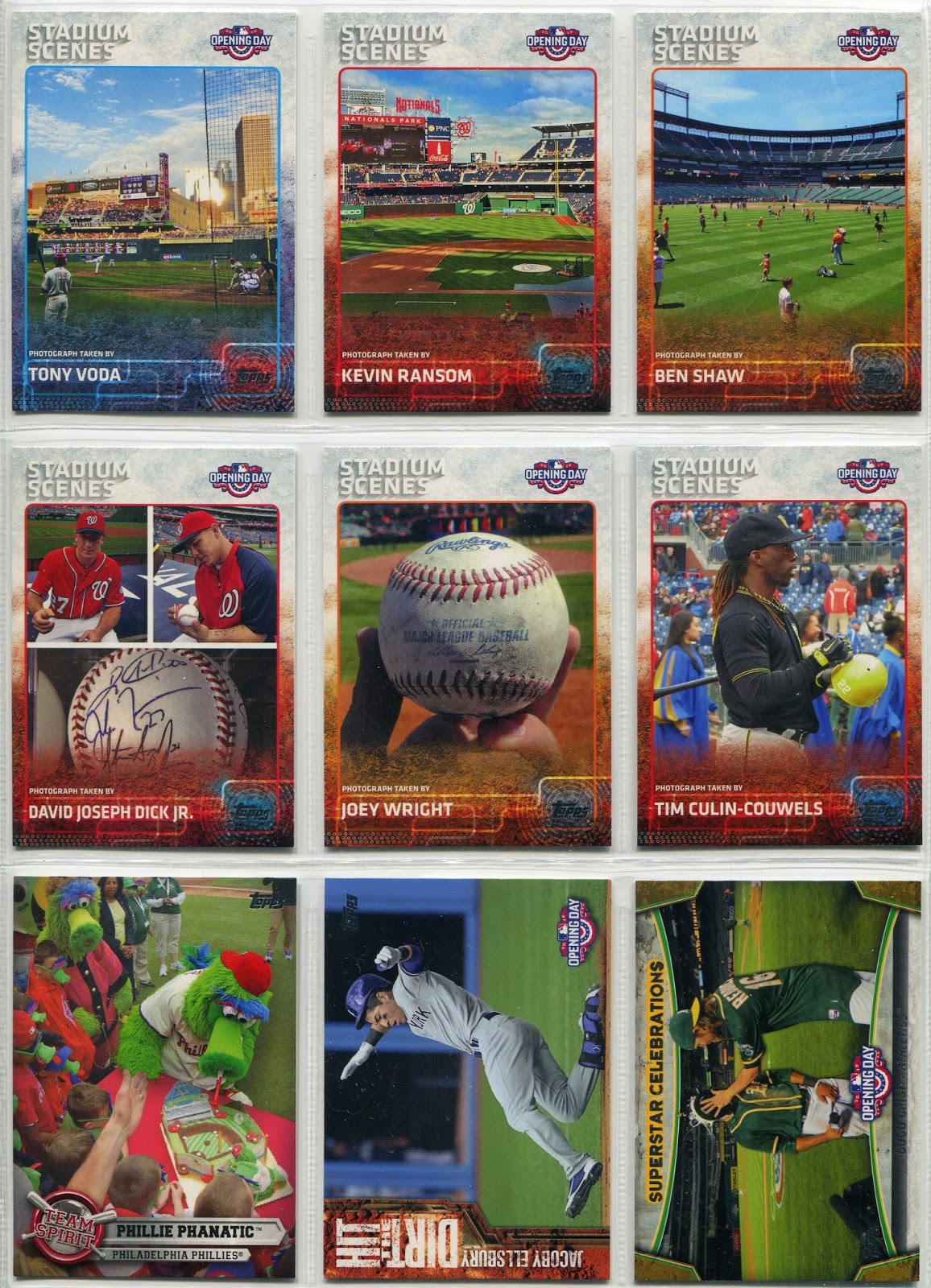 These came from that same guy.

The base cards were a nickel, and the inserts he had were a dime. Why isn't that every vendor's system?

All the photos found in the "Stadium Scenes" inserts were taken by fans. If that helps bring more "autograph" shots into the hobby (you'll find two on this page alone), then I'm all for it.

And that wrapped up my day of two card shows. 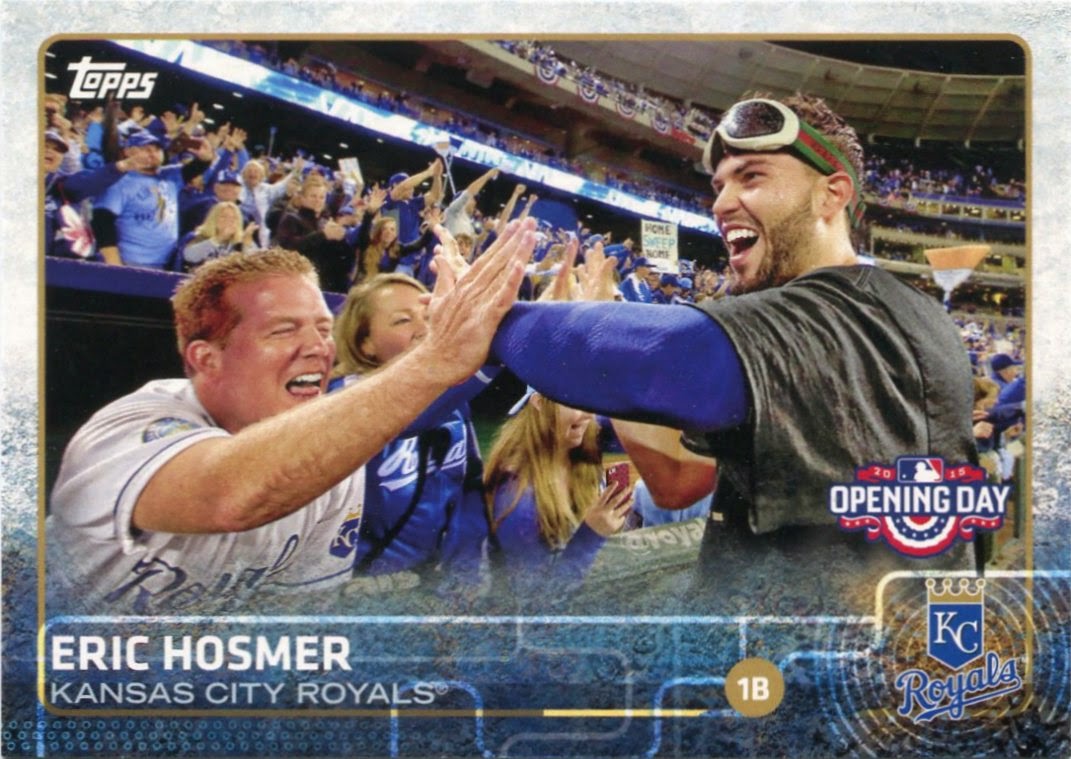 While I was digging through my finds at home later that afternoon, this Hosmer struck me as a bit odd.

I could've sworn that Topps used a different picture on his standard Flagship (and Opening Day) base card. A brief glimmer of excitement started to sweep over me. I gathered myself and went to the Internets to find out for sure. Like the day in general, I didn't want to get my hopes up too much.

A little research told me everything I needed to know, and the feeling of excitement returned all over again. For good, this time.

All because this Opening Day Hosmer just so happens to be a two-per-case photo variation short-print. Yup, just a dime. One dime. (It came from the guy with all the inserts. Appropriate, I guess.)

The real kicker is the fact that my dad is actually the one who found it. He noticed the interesting photo and said Hey, need this one? and into my purchase pile it went.

I don't usually like to sell cards, but a broke college student can't pass up an opportunity like this. It's on the 'bay as we speak, judging by the going rates, I might be able to make a good chunk of what I spent at these card shows back.

I'll have to plan these two-card-show days more often.
Posted by Nick at 6:22 PM

WOW! a word so overused but appropriate! #25 Vic Martinez in a dime box?!! What a card, and one I'm certainly interested in should it go the way of the 'Bay. My St Club set remains incomplete. You did well with the Heritage pulls too. Looks like a complete set is a possibility. PUIG in a dime box. Well, that's where I'd stick him too. ;)

Awesome haul Nick! That must have been quite the show!

I'm liking those '81 style short prints! Great haul Nick! Hope the Hosmer photo variation does well for you on the 'Bay.

Wow, huge luck on that Hosmer card! I say sell it and finance another dig through the dime boxes!