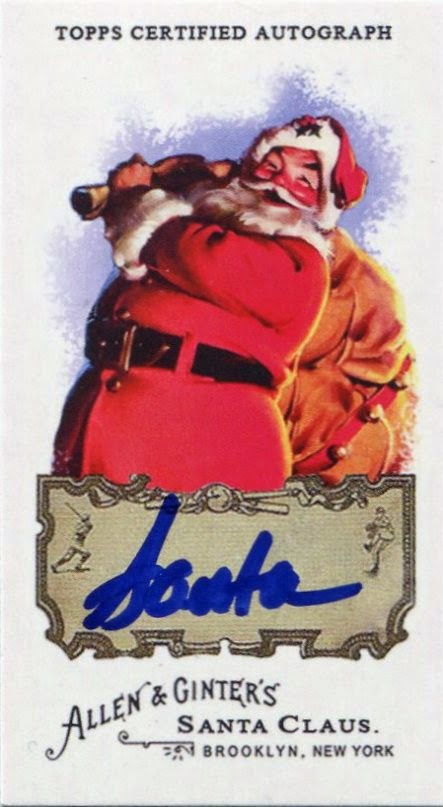 I've said this time and time again, but it really can't be emphasized enough.

I have a ton of respect for people who make customs.

Maybe it's just me, but there seems to have been a bit of a custom revival around the blogosphere lately. I don't remember many such blogs being around a couple years ago.

One such generous soul is reader Ryan, who emailed me a while back. Between a post on this blog and comments I left on a few others, he'd noticed how much I enjoyed the custom 2008 A&G minis that had been floating around the blogosphere. Chances are you've seen a few by now.

As it turns out, Ryan is actually the guy who makes them. 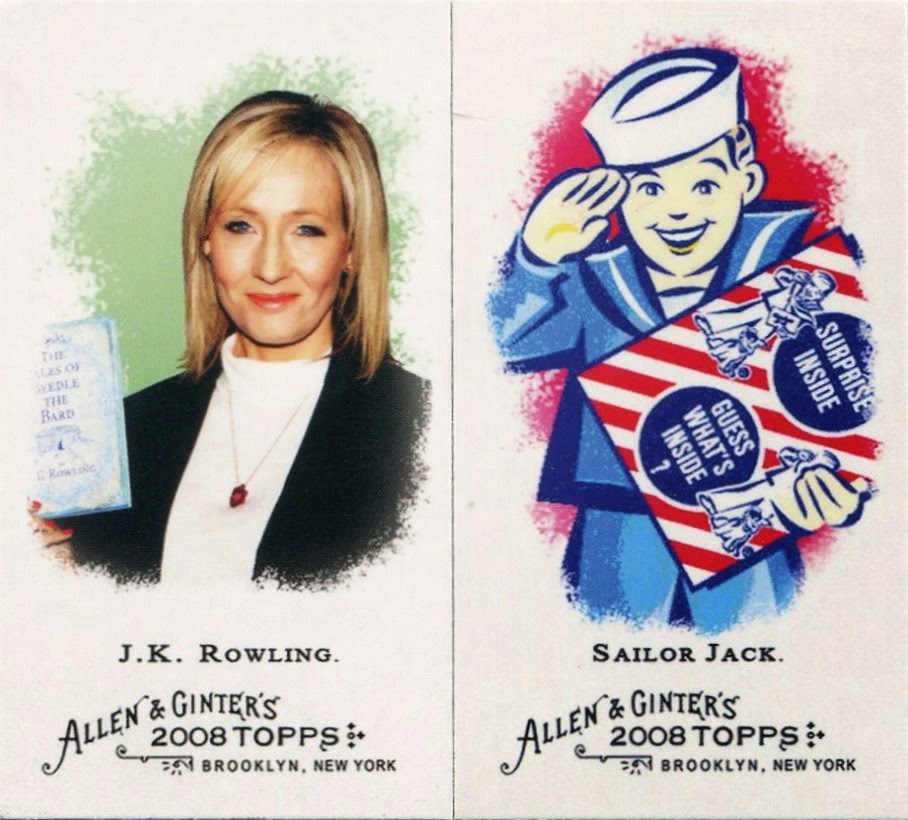 Ryan offered to send me a fresh new batch of his customs, free of charge.

What I do to deserve such generosity, I'll never know.

One thing I like about these customs is that they provide a nice mix of baseball and non-baseball subjects. I mean...Santa? J. K. Rowling? Sailor Jack? That's an awesomely eclectic grouping.

And, although I don't usually like to admit this, I'll 'fess up to the fact that I was one of those kids who waited in line (at midnight, way past my bedtime) for the new Harry Potter books. 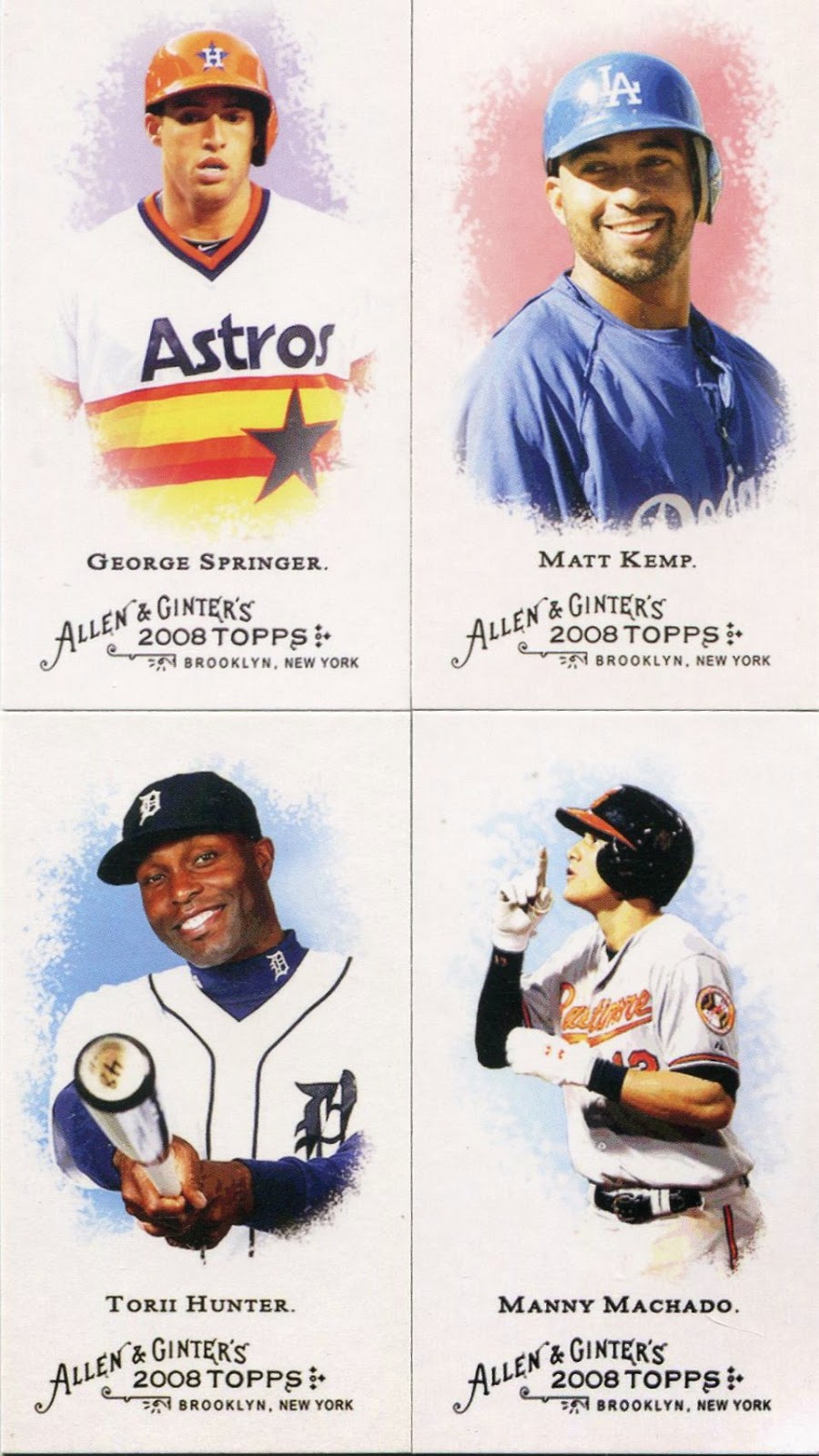 Of course, Ryan's custom set really hits its stride with the ballplayers.

Like the non-baseball subjects, the mix in here was fantastic. You've got veteran stars like Kemp and Hunter next to bright-eyed youngsters like Springer and Machado. And, between the throwback and the bat barrel shot, you'll even find a few customary mini-collection hits in this batch.

It really covered all the bases. 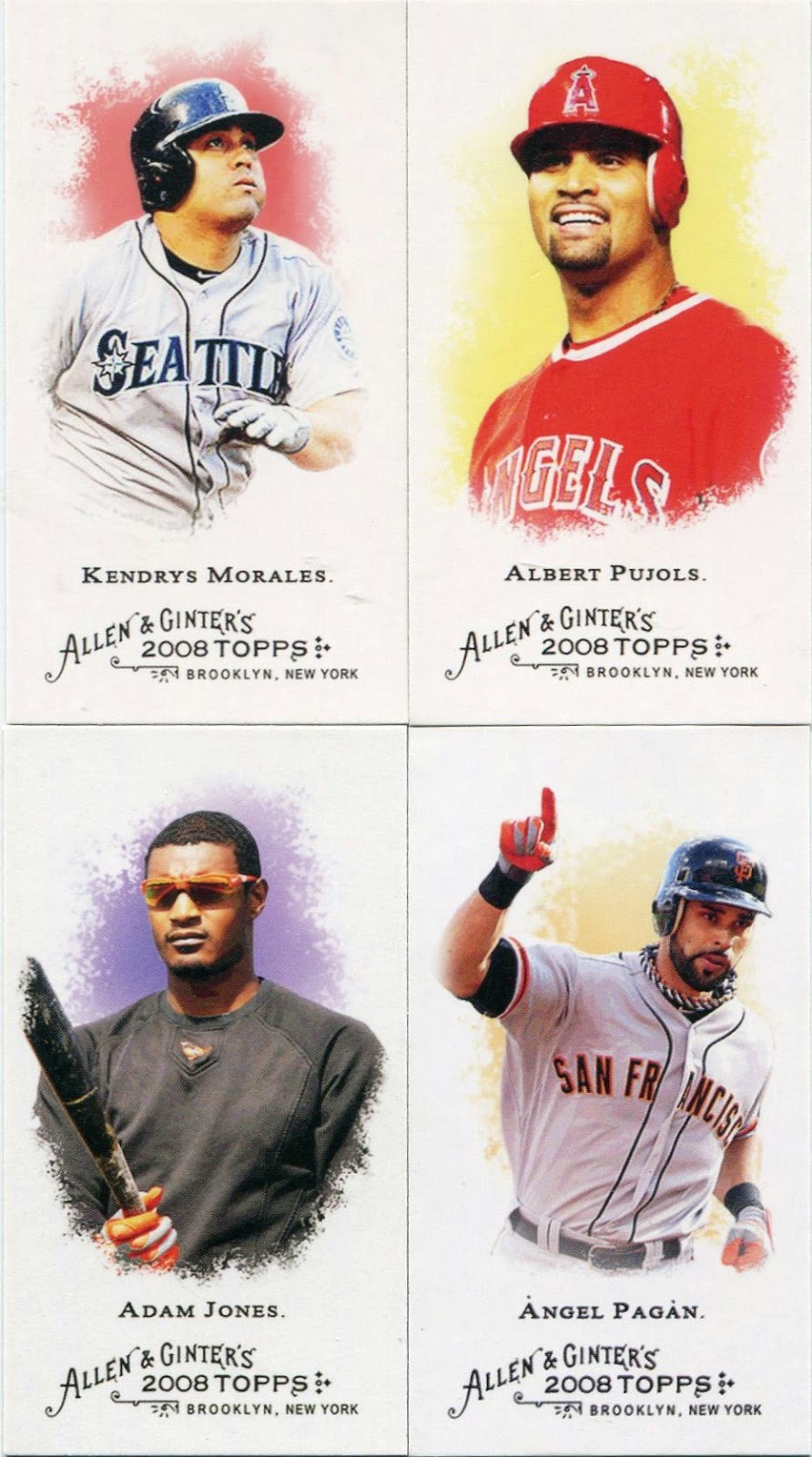 If I didn't know any better, I'd get these confused with standard A&G minis.

They're that well-designed. Better yet, Ryan even used the template from 2008, my absolute favorite year of A&G.

And, while I've said this before, I should note that, yes, these customs do go into my binders next to all my other "mainstream" cards.

They deserve a nine-pocket home just as much as anything else around these days. 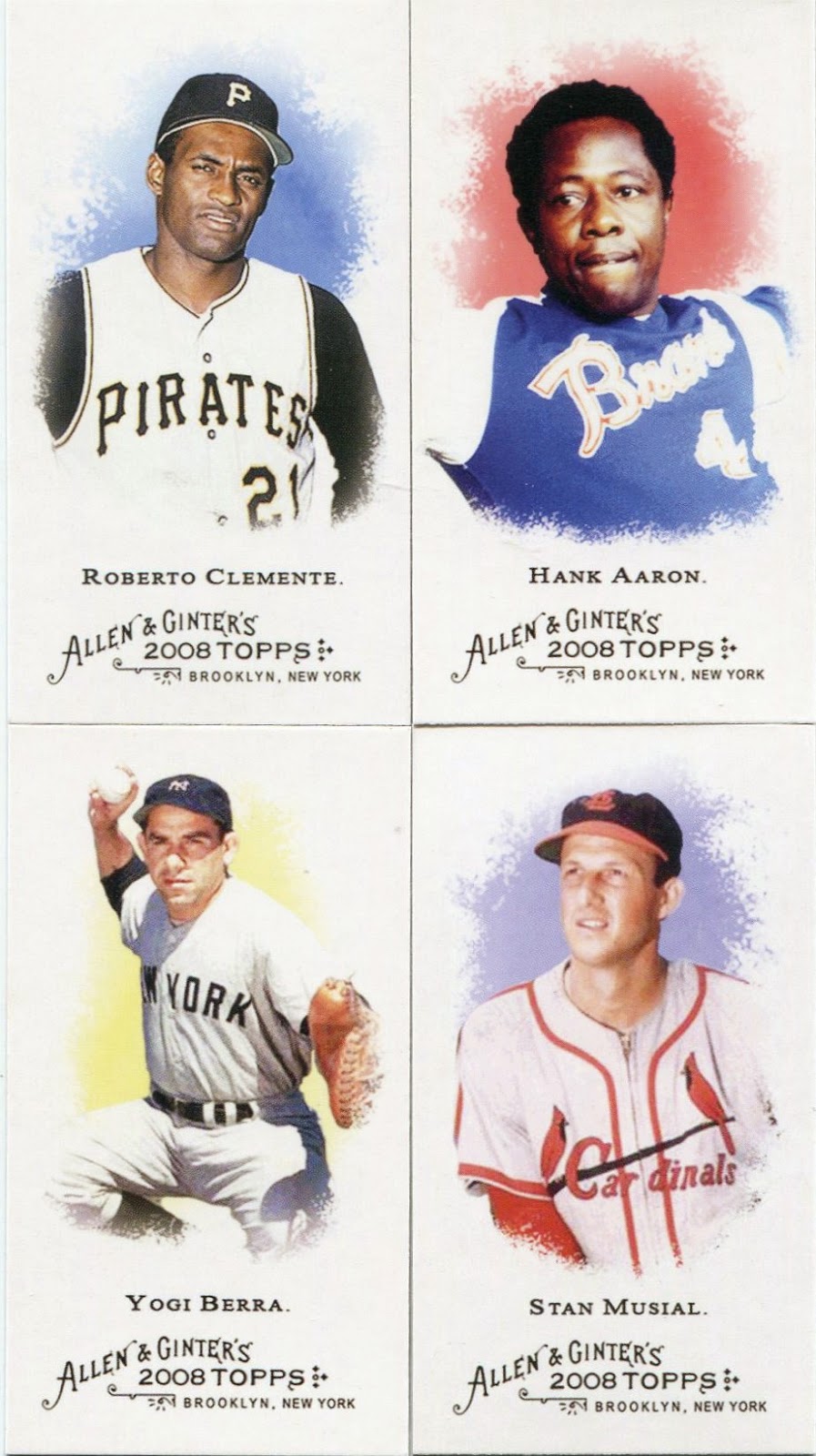 I think my personal favorites of the lot were the legends.

Ryan actually included two Clementes in this package. At first, I thought it was some sort of mistake. A custom dupe? That didn't seem possible.

Only much later did it dawn on me to check the backs. 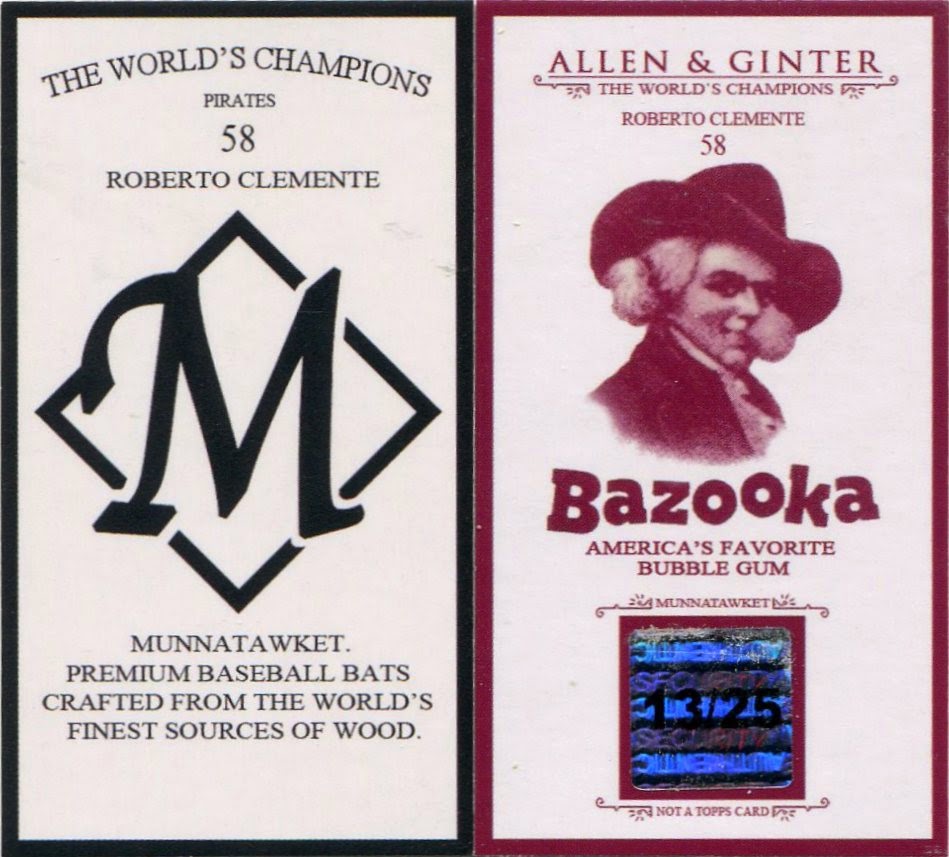 Like the standard A&G minis, Ryan's custom set apparently includes Bazooka parallels, numbered to just 25 copies a piece. I don't know if Ryan knew it or not, but Clemente is my all-time favorite player, so specifically scoring his parallel was a joy.

Custom guys like Ryan keep this hobby fresh. If I had any artistic ability whatsoever, I'd probably be trying my hand at it. Creations like these are pure works of art.

As long as people keep cranking out customs, I'll keep salivating over them.
Posted by Nick at 6:14 PM

Ryan is awesome. He has sent me some of his custom minis an they are amazing. Has a variety of people in the set. I do plan on chasing the set so if you have any dupes I'd be willing to trade or work something out

Quite a nice batch of customs indeed! No need to be ashamed to be a Potter fan, I'm almost 50yo and not ashamed to admit to enjoying Ms. Rowling's creations.

Wowwee. Nice back. These are getting out of hand in the coolest way possible.

That Sailor Jack is fantastic!

These are some of the coolest things ever. And I feel like it's a super secret treat just for us bloggers.

Agree with Matthew... that Sailor Jack is awesome!