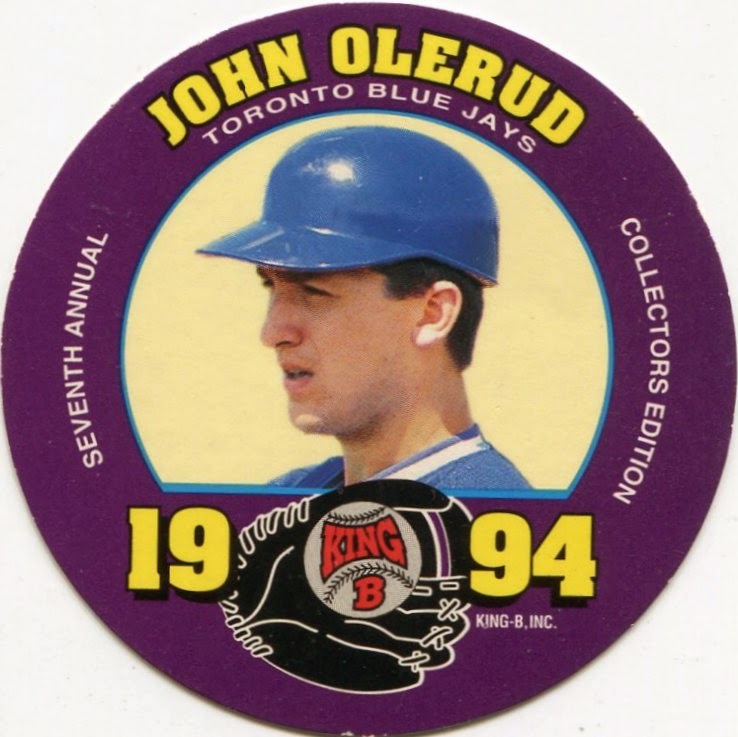 There are a lot of reasons to collect baseball cards.

The joy of finding a card you've been trying to find for years. The delight of checking off that last number of a set you're building. The giddy surprise of finding an awesome random card that you never knew existed.

Such reasons are all fine and good, but these little pieces of cardboard have the ability to go much deeper than that. One thing I've definitely learned during my years of collecting is that cards have the power to lighten some of our darkest days.

Seeing a flat-rate box in my mailbox is surefire way to make things seem a whole lot sunnier, and, thanks to John over at the terrific blog "Johnny's Trading Spot," that's exactly what I found waiting for me one afternoon a while back.

I ran up the stairs, itching to break open the seal of what was sure to be a fantastic array of cardboard. 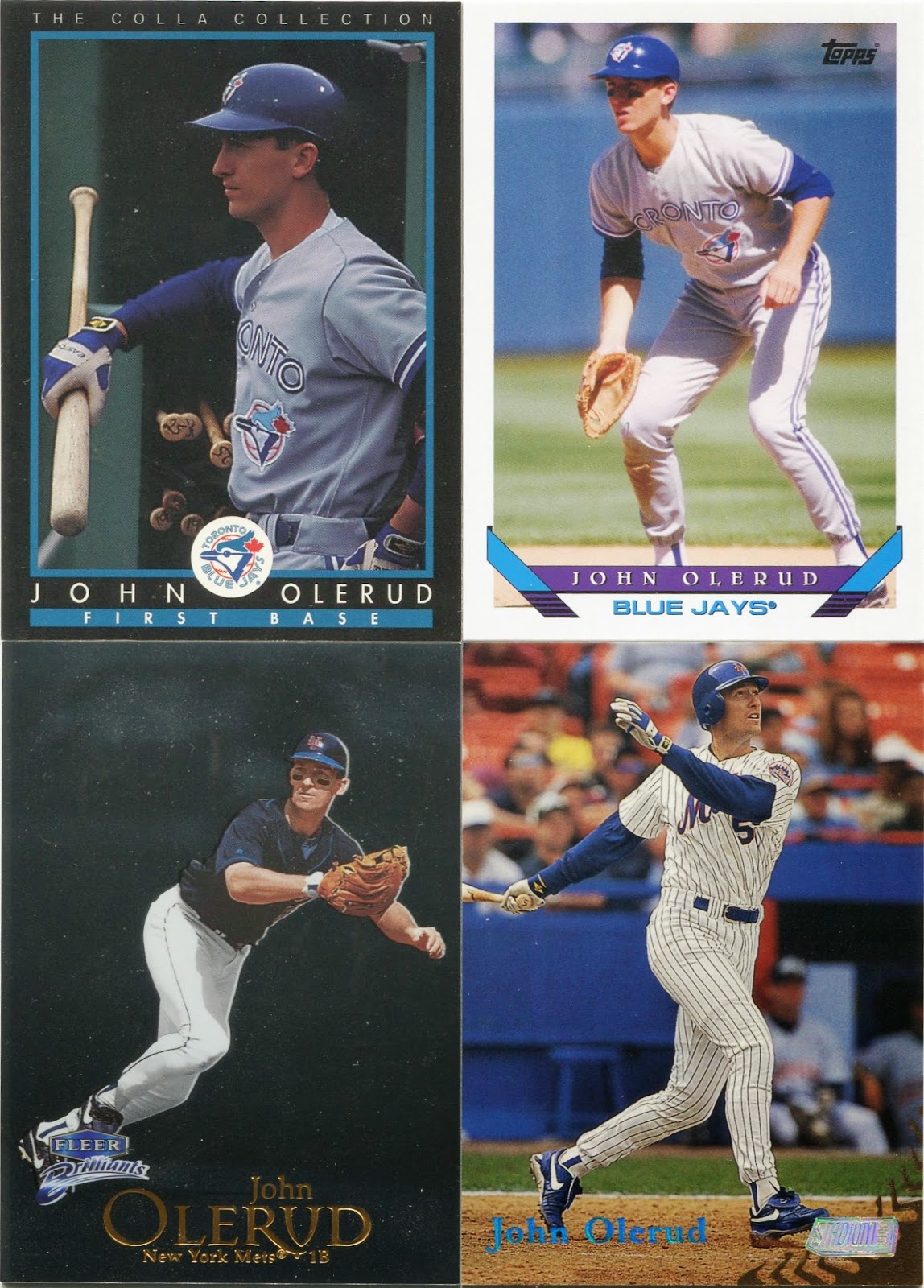 This trade in particular got me thinking about the therapeutic benefits of cardboard, because John's mother sadly passed away a couple weeks ago.

Obviously, losing a family member is way more serious than merely having an off day or two here and there. But I'm happy to see that John is starting to post on his blog again. As tough as it might be, he's doing his best to use these seemingly innocuous pieces of cardboard as a way of therapy.

Cards can be a fun distraction in our spare time when we need them to be, but they can also help us trudge through the bigger obstacles life throws at us.

That, I think, is the true beauty of this hobby. 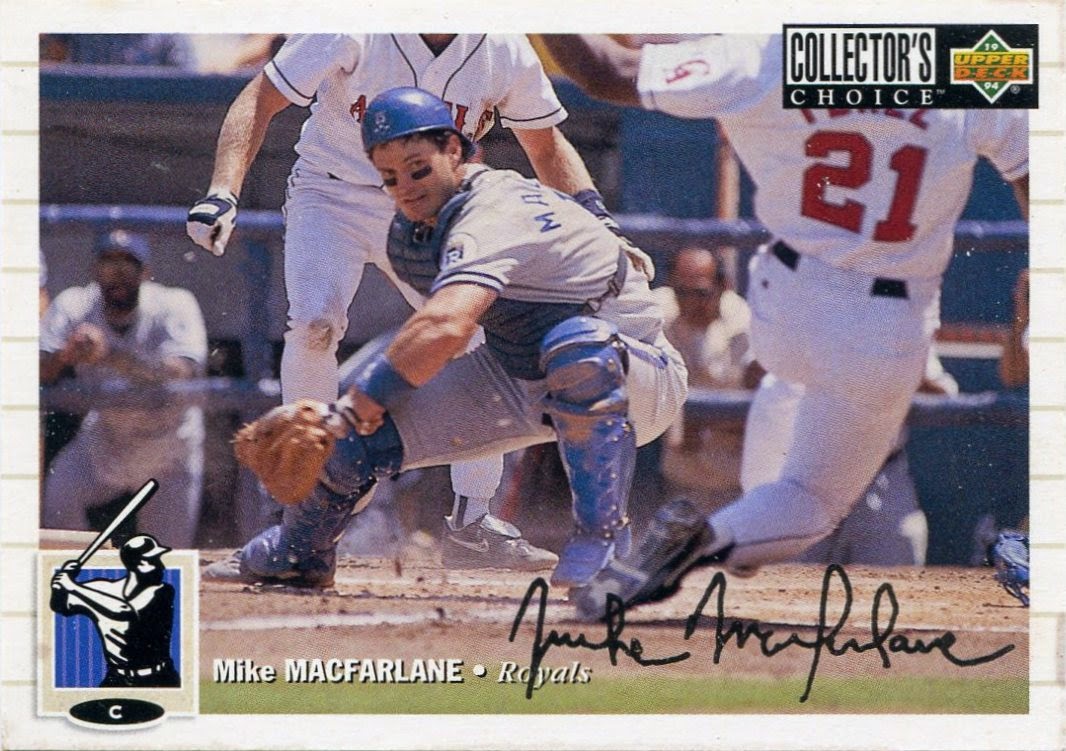 I can go on and on about this topic, but I think that's about as heavy as I'll get for now.

This is, after all, a trade post, so let's shift gears and bask in the glory of the great batch of cards that John hand-picked for me.

In addition to the budding stack of Oleruds, John also dug up quite a few new mini-collection hits.

I'm enamored with this particularly action-packed play at the plate. 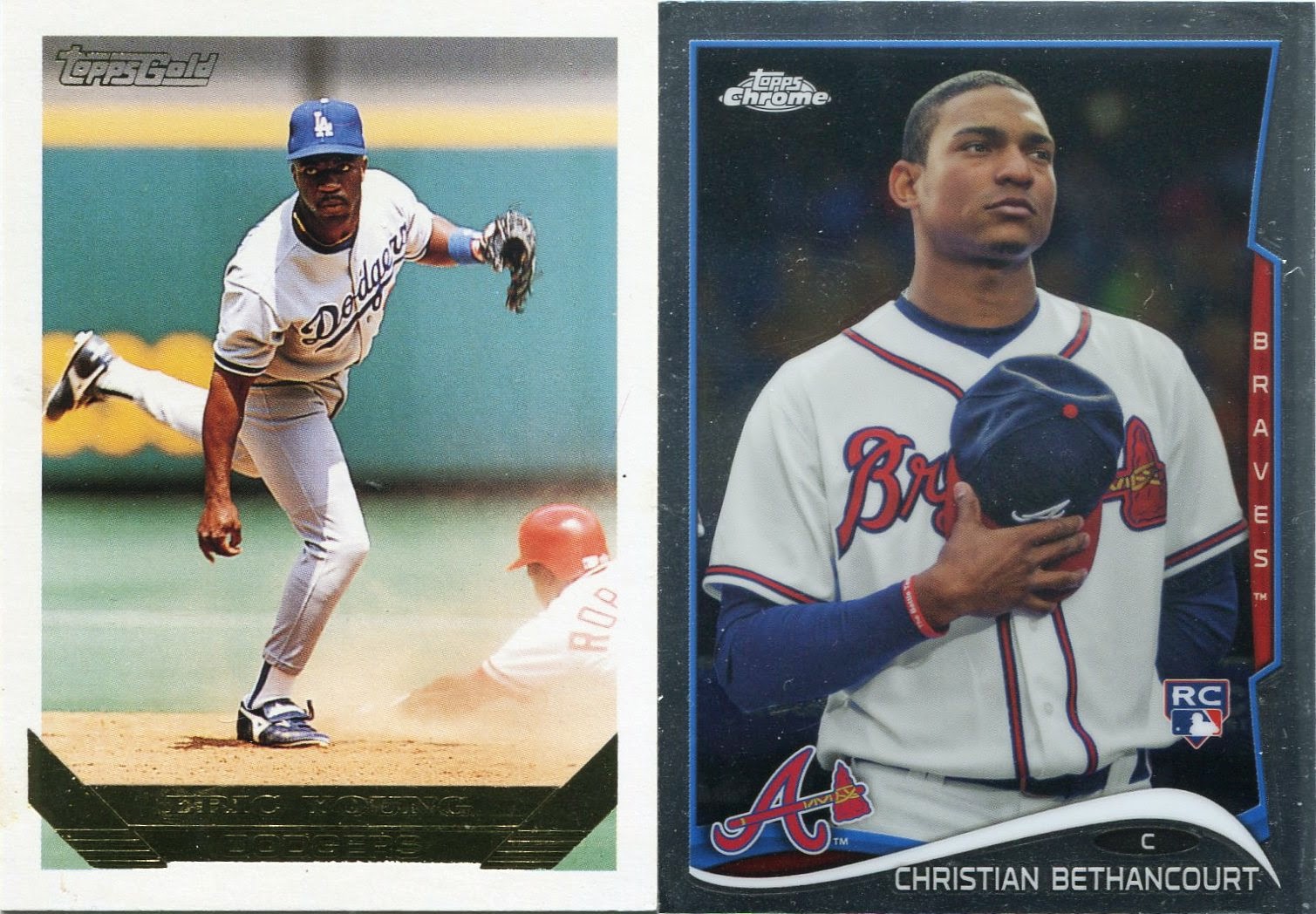 We have a couple additions for my "double dip" and "anthemic" themes here.

I can remember owning the base version of Eric Young's 1993 Topps issue as a very, very young collector. I'm not sure why that specific card stands out, but I've probably had it since I was about nine or ten years old.

And now, all of thirteen years later, I finally own the gold parallel. 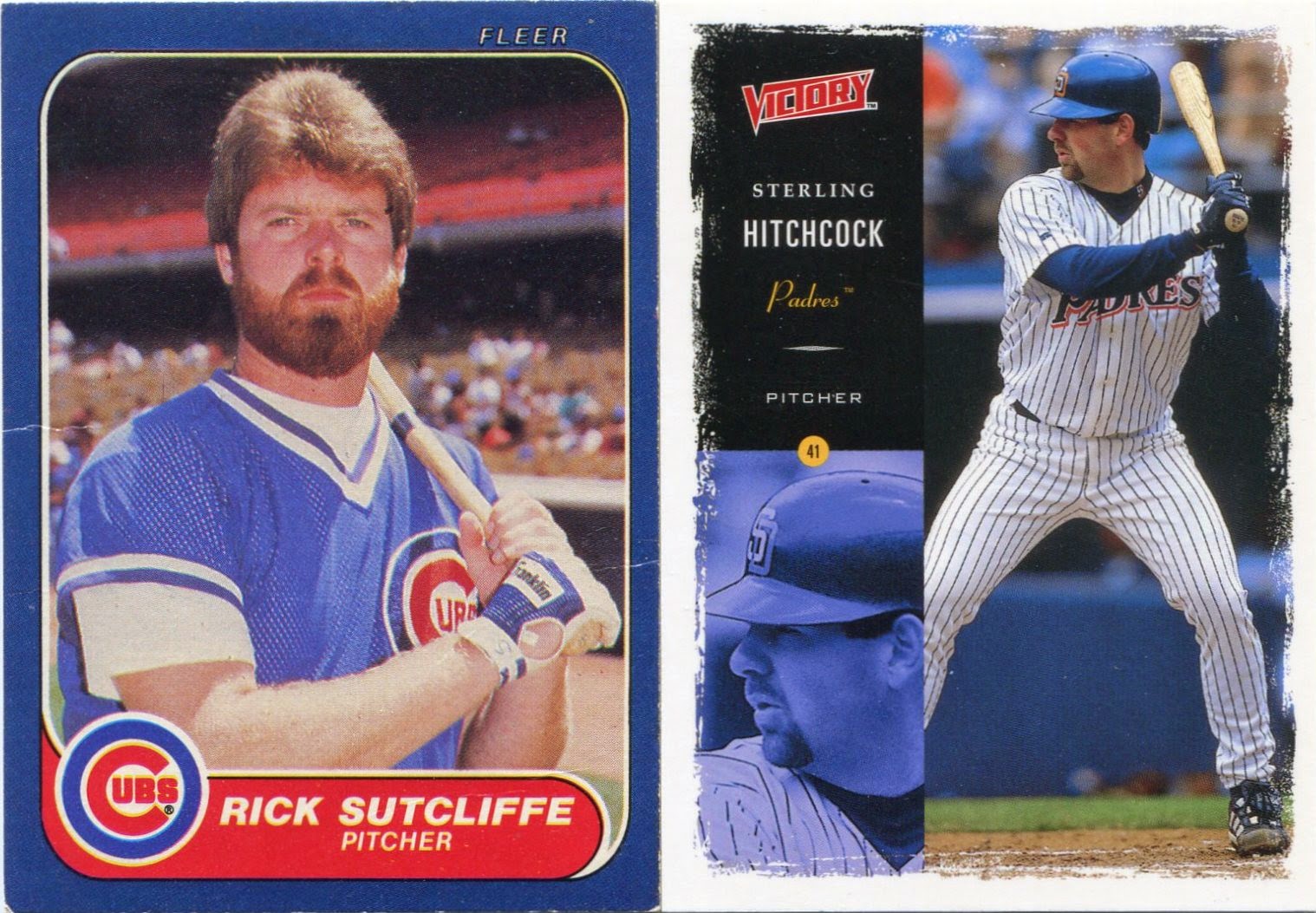 John also threw in some new hits to my "pitcher at the plate" mini-collections.

I could never understand why photographers had pitchers pose with bats. You can see the confusion on the faces of a lot of the players.

Rick Sutcliffe doesn't appear to be very happy about it. 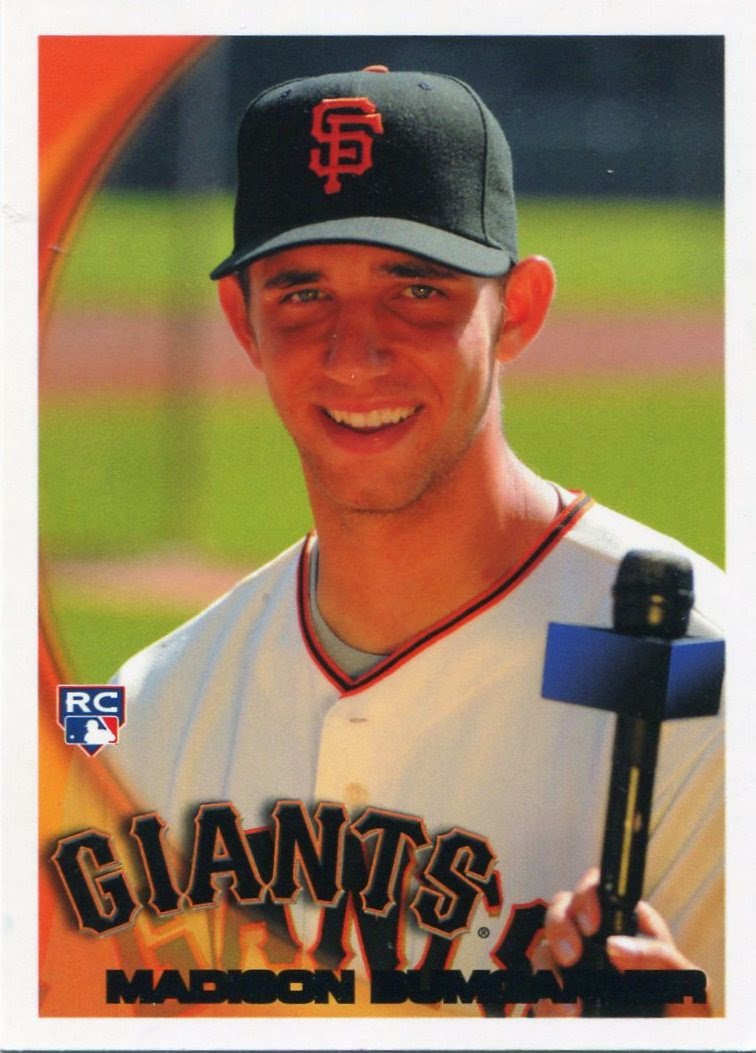 This was an interesting one.

At first, I thought it was a double. I've had this "interview" shot of Madison Bumgarner (on his rookie card, no less) for a while now. I came within a few seconds of tossing it into my dupes box. But then I noticed something.

There's no foil on this card.

No foil Topps logo, no foil around the name plate, no nothing. I did some research on the off chance that it was part of some special sans-foil release. No luck. From the looks of it, I think what we have here is a hallowed printing error.

I'm treating the error as a different card, so the foil-less Mr. Bumgarner will go into my binder right alongside his standard foily counterpart. 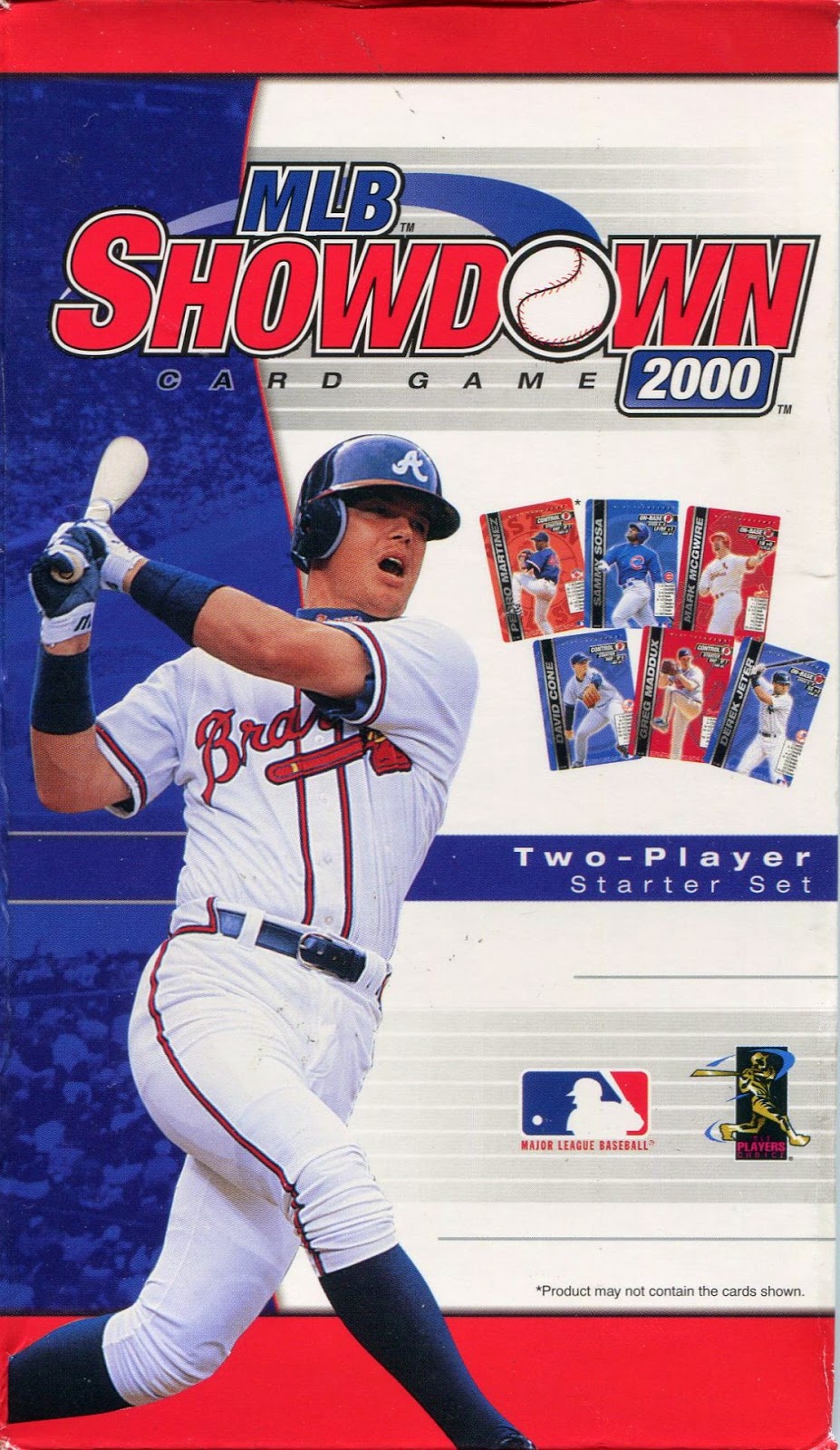 Still, as great as everything else was, this was by far the biggest surprise John had in store.

What you see here is an 2000 MLB Showdown "booster box" from 2000, the year of the card game's debut. I've mentioned this many times before, but I was an avid MLB Showdown fanatic back in the day. I played it daily with my dad and even got a handful of friends into it for a while.

I don't recall if I was in on the ground floor with MLB Showdown, but I'm almost certain I was buying them regularly by around 2001-02. 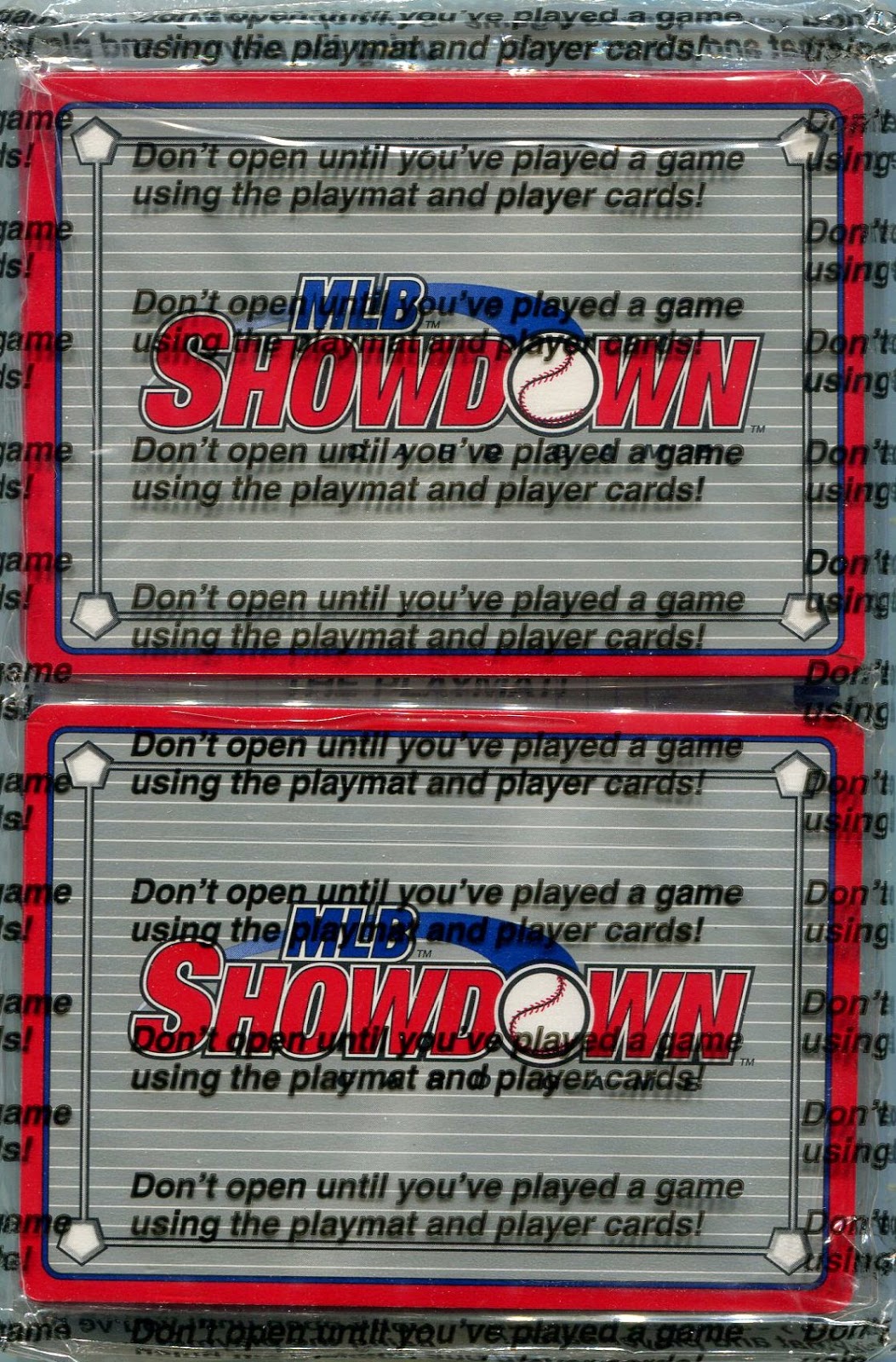 I actually bought this very booster box at some point during my peak Showdown years.

Since every booster included the same cards, that means that everything in here is a double. 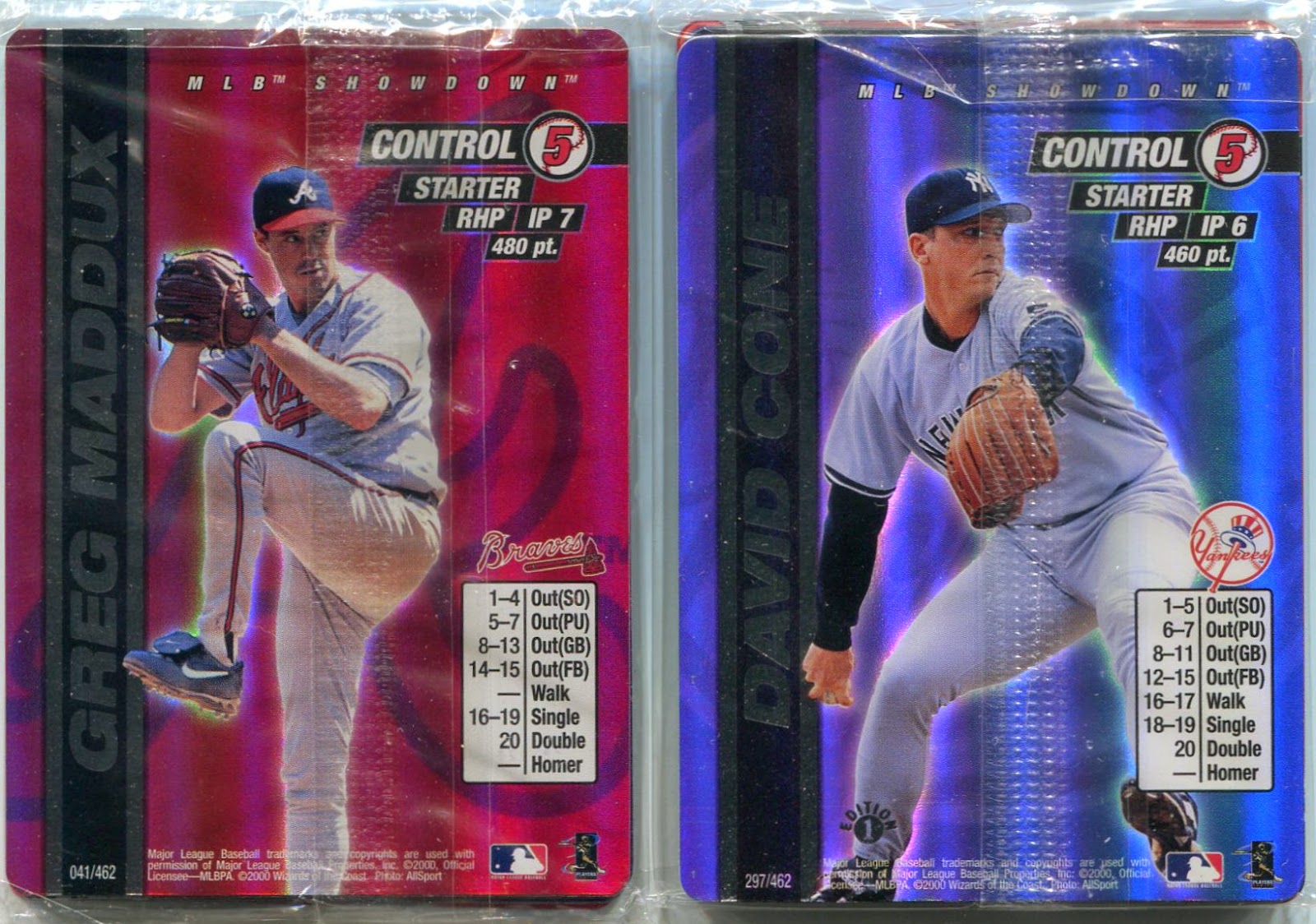 ...and player cards, I've owned everything in this box for a long time now.

I ripped open these very packs a while ago. One American League pack with pitching ace David Cone on the front, and one National League pack with rotation anchor Greg Maddux. These are all dups.

Normally, that would be a little disappointing. But not with these cards. I'm actually really glad that John sent this over, because now I can keep this box intact as a treasured artifact from my Showdown years.

It's still the best card game I've ever played. 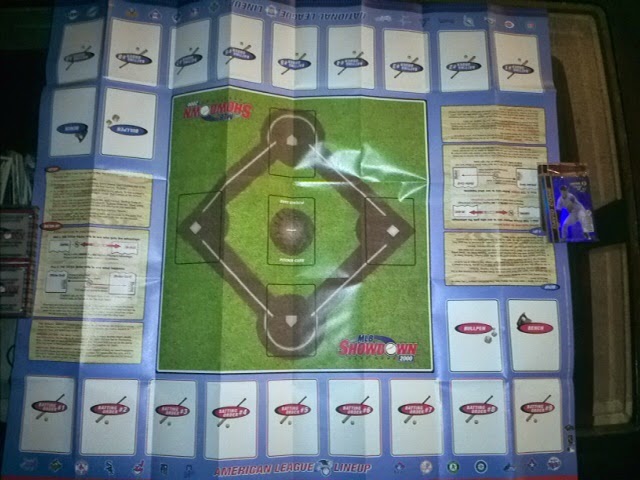 And, much like I do with my standard baseball cards, I treated myself with some MLB Showdown therapy quite often as a kid.

If things were getting a bit too much for me, I'd lay out the field on the dining room table and ask Dad if he wanted to have a game. I didn't have to say what game. We both knew.

The company that used to produce MLB Showdown cards (Wizards of the Coast) stopped making them in 2005, although there have been some rumblings of a revival lately. Here's hoping the game of my youth (or some offshoot thereof) can make a comeback.

In the meantime, all my old cards are tucked underneath my bed as we speak, rubberbanded and ready to go. After going through this package, I might just have to sit down and have a game of Showdown.

Glad to see you found some you could use. I have another stack building up too, but as tonight is the last night at my moms I had to pack them. Great catch on no foil too.

That MLB Showdown package is just awesome. That's the kind of thing I hope I find in my card adventures!

Bought that same booster box for the Chipper with high socks pic alone played the hell out of it one summer with my cousin.