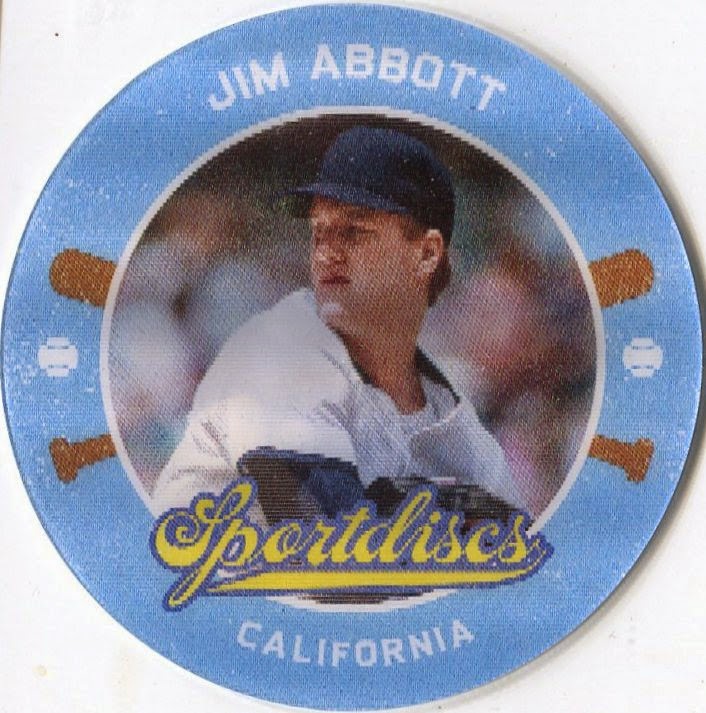 I've never been much of an artist.

I was the kid in art class who would always draw stick figures. It's been that way ever since I was about five years old. Try as I might, I just don't have it, whatever it is when it comes to art.

In a way, that makes me feel a little guilty every time I rag on a bad baseball card design, because, deep down, I know that I honestly wouldn't be able to whip up anything better. So maybe I shouldn't complain in the first place whenever something like Panini Prizm hits the shelves.

It's obvious that my buddy Mark of the great blog "Battlin' Bucs" has the artistic chops. He has both the ability to create physical cardboard art (more on that later) and the gift of crafting a truly artistic trade package.

This Jim Abbott "Sportdiscs" insert is fantastic, and, contrary to what I said in a recent post, these actually don't hail from 2014 Donruss. They were found in packs of 2013 Panini Hometown Heroes.

So, no, there still isn't anything to like about 2014 Donruss.

Again...maybe I shouldn't be complaining with my artistry, or lack of. 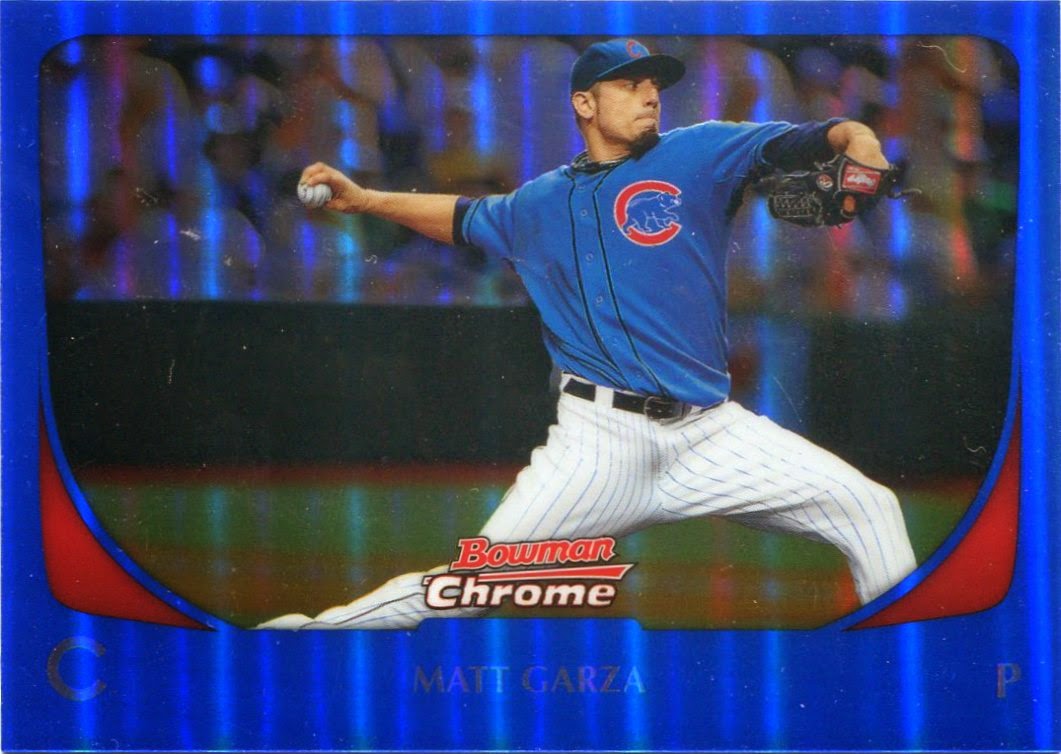 Blue refractors are about the most elegant form of cardboard artistry out there. 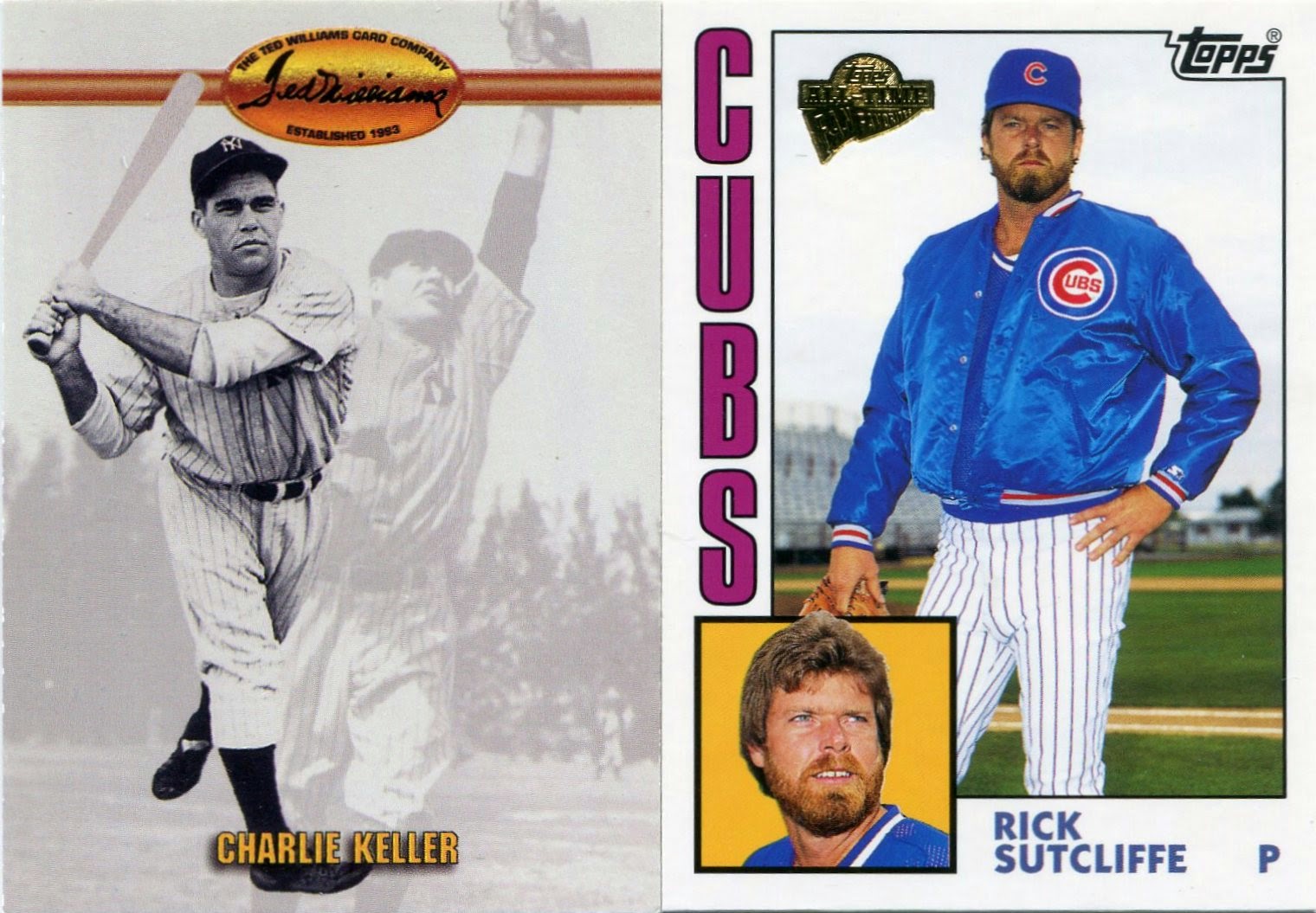 It's always fun finding cards of old-timers (is Rick Sutcliffe an old-timer?) that don't often pop up in checklists these days.

Save for Topps Total, Fan Favorites is the one brand that I'd like to see make a return in today's hobby. 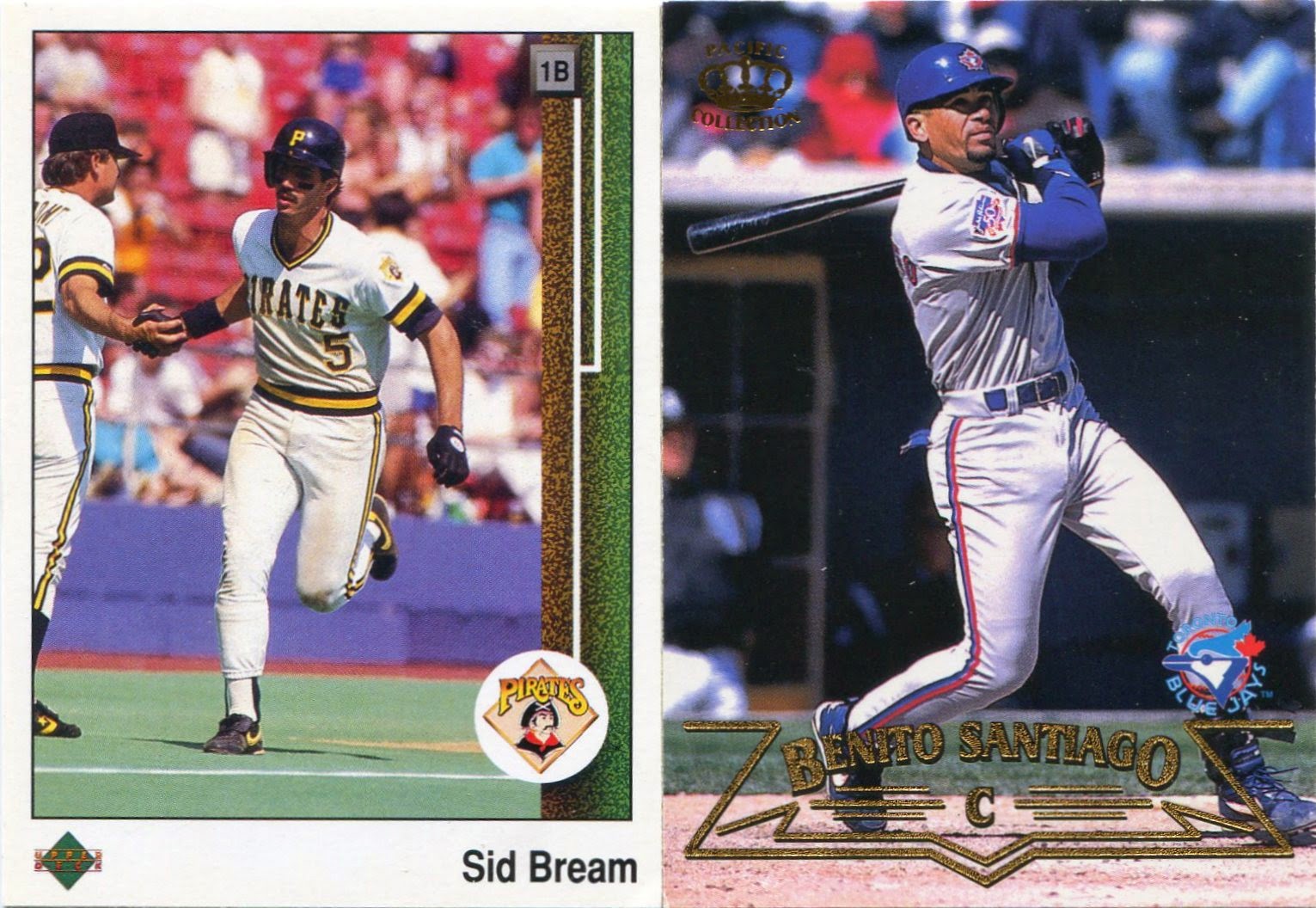 That nifty Sid Bream is further proof that UD's early checklists are the gifts that keep on giving.

I'm a fan of the Santiago for a couple reasons. One, there aren't many cards of him as a Blue Jay. Two, it comes from one of the many umbrella sets of the Pacific brand.

Because we all know Pacific rules. 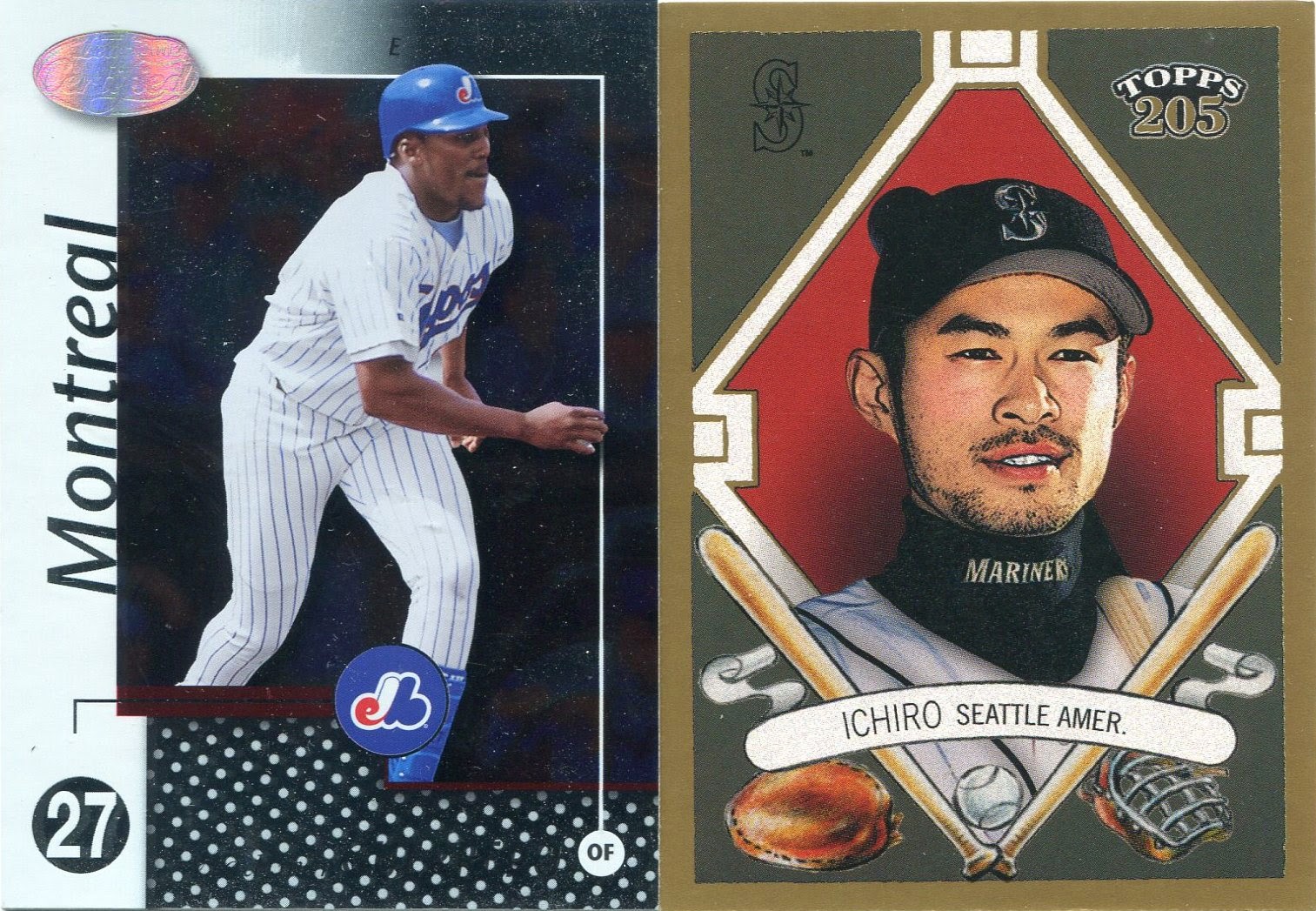 New ones for my two most expansive player collections.

Seriously, Vlad and Ichiro are going to need their own binders soon. Mark helped out a ton with my 2012 and '13 Panini Cooperstown needs.

I'm sorry to hear that this brand has gone by the wayside in favor of a higher-end release. I guess it shouldn't be much of a surprise in today's cash-crazed hobby, but I thought you were better than that, Panini.

Give me my Cooperstown back, and we'll be cool. 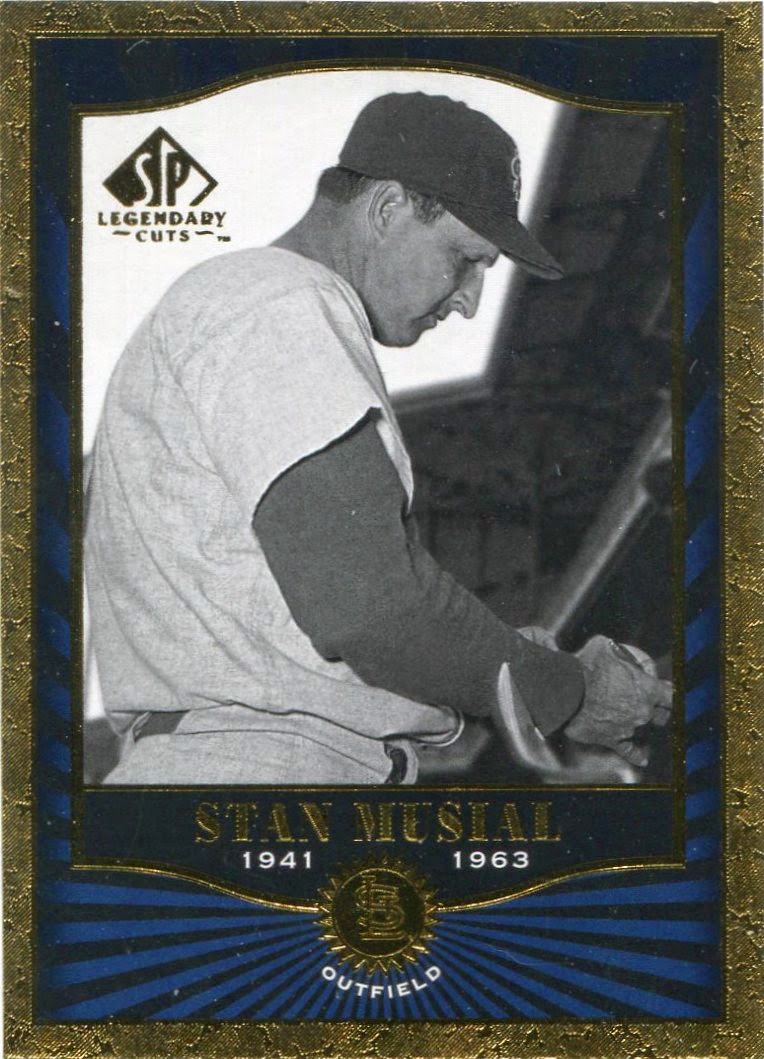 Like a lot of what I seem to get in trade packages, I'm surprised I didn't already know about or own this particular card. I mean, it's one of baseball's all-time greats signing for some extremely lucky fans.

Definitely one of the better "autograph" shots out there. 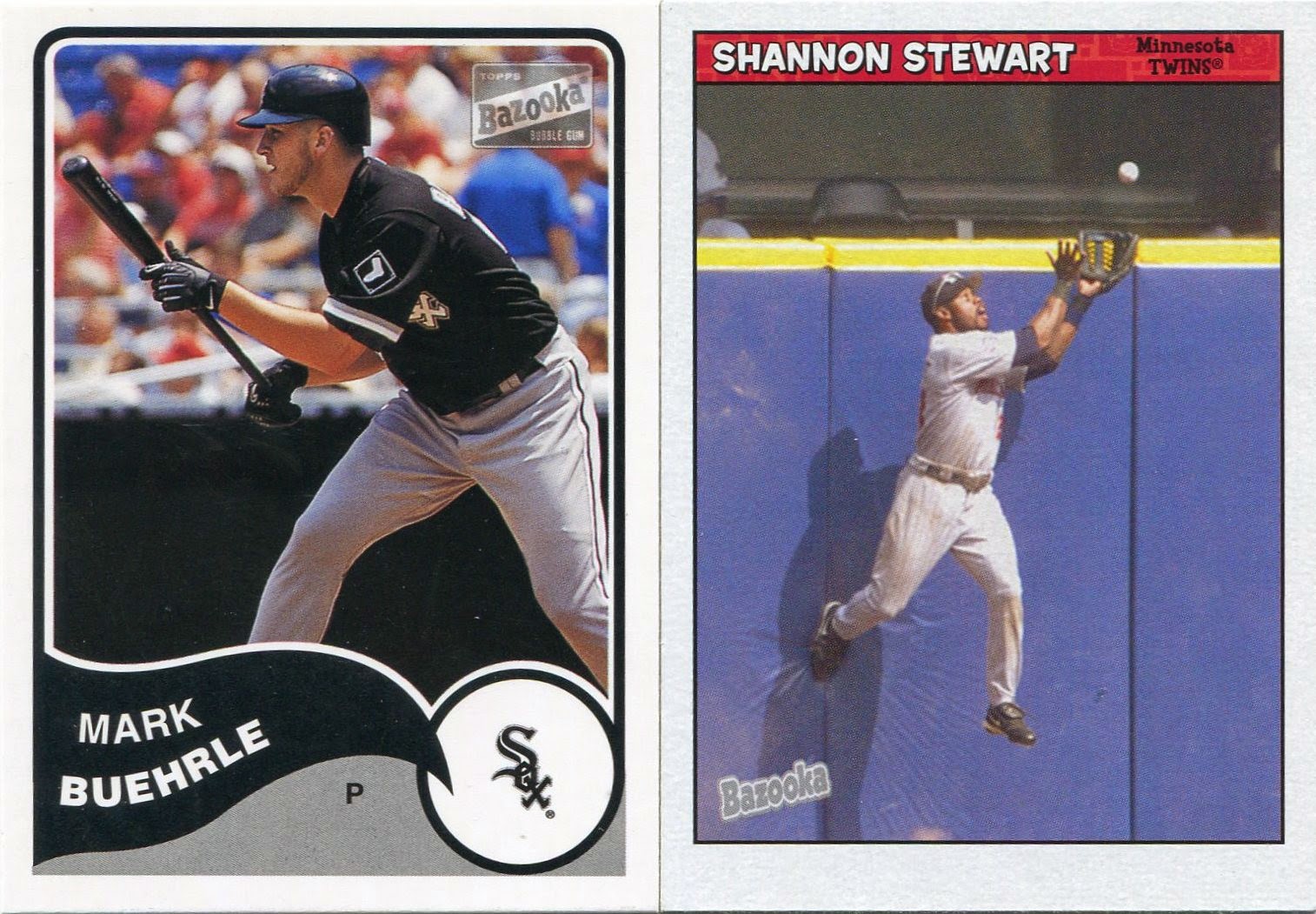 The mini-collections kept on coming with these two Bazooka singles.

I'm especially fond of Buerhle laying down the bunt, a rare example of an AL pitcher at the plate. 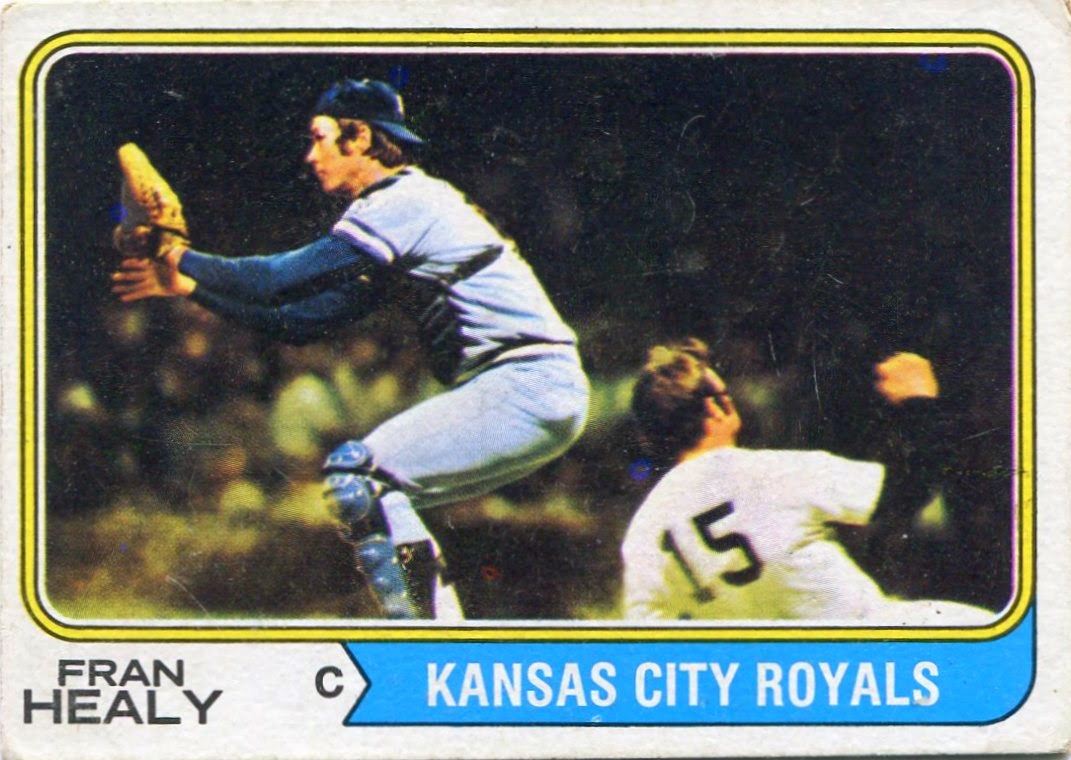 Here's a rare vintage mini-collection find, and an absolute jaw-dropper, to boot.

I've seen this card before, but never managed to snag a copy for myself. As if the nighttime play at the plate photo wasn't enough, this '74 Topps Fran Healy features a cameo from Thurman Munson himself. (Healy would eventually serve as Munson's backup with the Yankees a few years later.)

If this card is a work of art on the part of Topps... 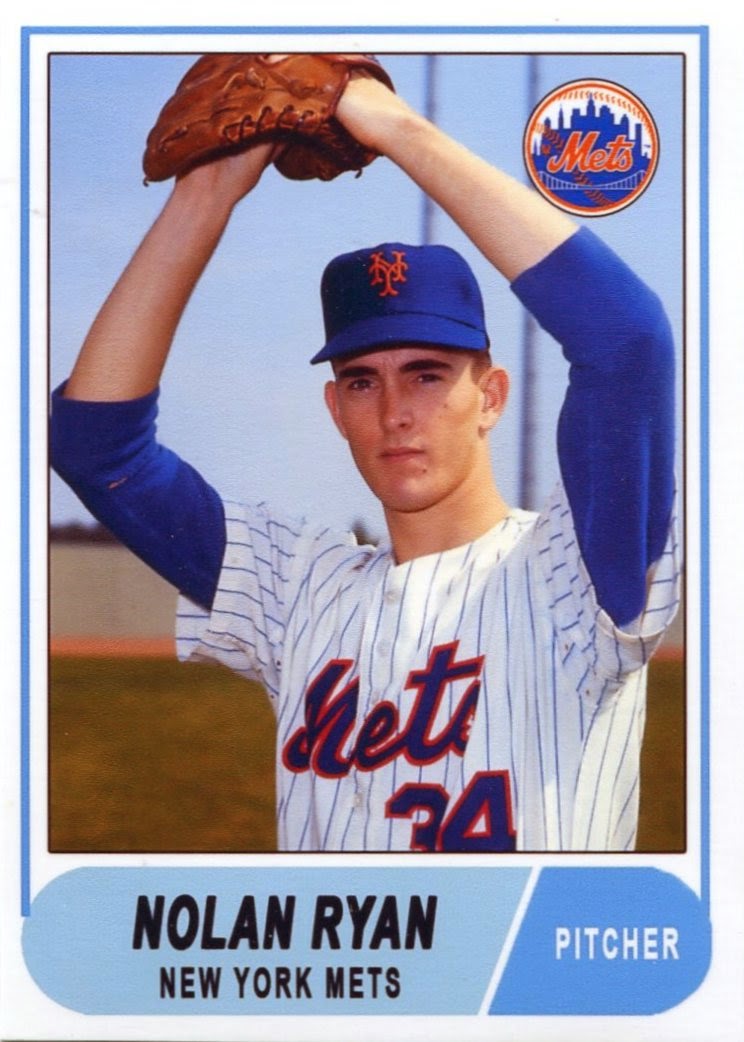 ...then this one is a work of art on the part of Mark.

Don't rack your brain trying to figure out what mainstream set this card hails from, because it's actually one of Mark's beautifully homemade customs. He's detailed the process on his blog, but never in a million years did I think he'd go through the process of printing one out and sending it to me.

The look of this custom hails from the 1968 Topps football design, which explains why it didn't ring a bell with me. It's like Mark knew that my favorite cards of Nolan Ryan are the ones of him as a Met. Something about the unfamiliarity of that uniform, I guess. 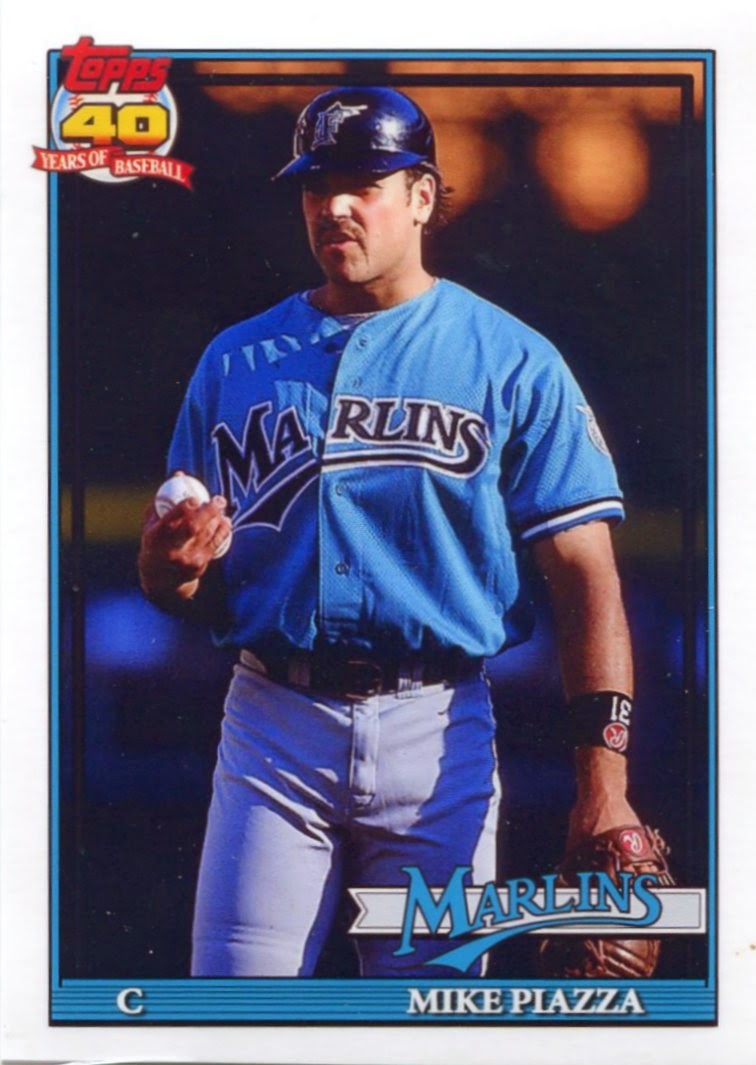 ...Mark threw in a second custom for good measure.

And, as if the sight of Nolan Ryan in a Mets uniform wasn't enough, Mark made sure to top that with a shot of Mike Piazza during his five-game stint a Florida Marlin. This design should seem a bit more familiar to baseball card collectors, as it is a perfect mirroring of the '91 Topps template.

These are the types of amazing work that constantly make me feel inferior as an artist. I don't have the patience, creativity, or talent to create something as masterful as these two customs.

And, if this doesn't seem obvious already, these will indeed take their place next to all my other "mainstream" cards in my many team binders. They're just as good (if not better) than most of what's in there already.

When it comes to art, I'll just go back to my stick figures and let people like Mark take the wheel.
Posted by Nick at 6:16 PM

Get that guy a job at Topps!

Sweet customs! I wish I had the talent to create those. I'd sit there making Tony Gwynn customs in my free time.

Side story: My friend went to Spring Training a few weeks ago for her bachelorette party and Matt Garza totally wanted to hook up with her. She (jokingly said she) was tempted... since Garza mentioned that he's made over 50 million dollars in his career. In the end, Garza and a few other Brewers bought her group several rounds of drinks.

With all your different mini collections, it can be almost as much fun finding cards for my blog buddies when I'm going through boxes at shows as finding stuff for myself.

The customs have been a blast to play around with, so I'm glad you enjoyed them.

Um, wow, that Piazza/Marlins card is a beaut!!