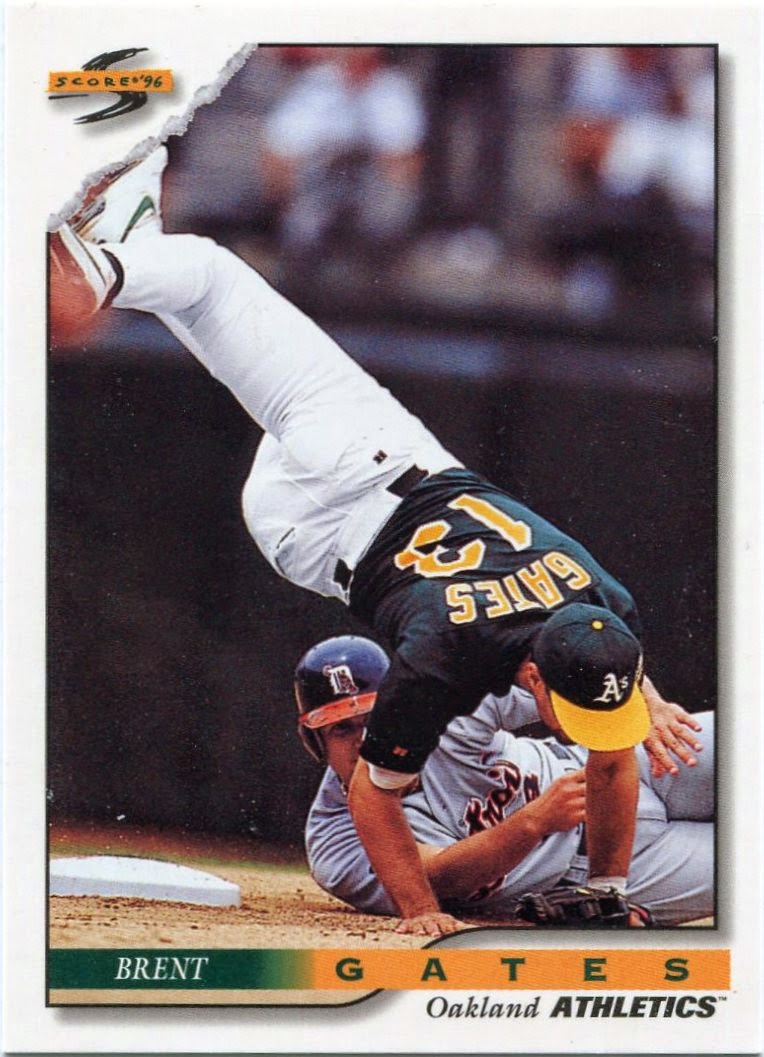 It's a very special time here in Dime Boxedonia.

As of this writing, I am officially on summer vacation. I finally finished the last of my finals this week. No matter how old I get, summer break is always a highly anticipated event for me.

I'll have a little more on my plate during these next few months than usual. I'm taking a summer class for the first time in my college career (a creative writing class, fittingly), and I have to really focus on finding a part-time job now that school is over.

Even so, summer should still be a time to celebrate. With all the schoolwork I've been doing lately, I haven't had a lot of time to sit down and absorb my collection lately. That's never good.

With a little more time on my hands in the coming months, I'll be able to give my cards all the appreciation they deserve. That extends to trade posts as well.

A fitting celebration trade package recently arrived from Michael (a.k.a. Mr. Spiegel) over at the awesome blog "Nomo's Sushi Platter". It's a shame that Mr. Spiegel hasn't blogged in a while, but it's good to know that he's still lurking around the blogosphere.

If this awesome "double dip" shot is any indication, I flipped for what he sent my way.

Hey, not all the jokes can be good around here. 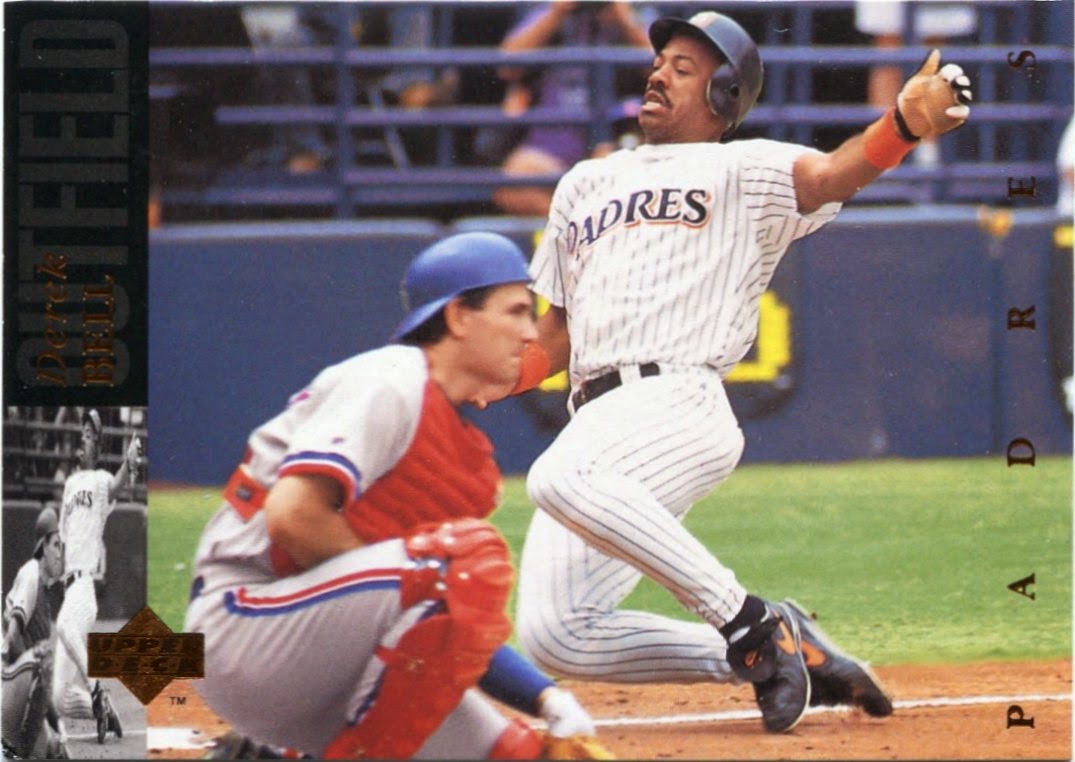 Mr. Spiegel put one heck of a batch together for me. It's become par for the course with my fellow blogger buddy, as we've traded on many occasions in the past.

He knows how much of a kick I get out of "plays at the plate" by now. 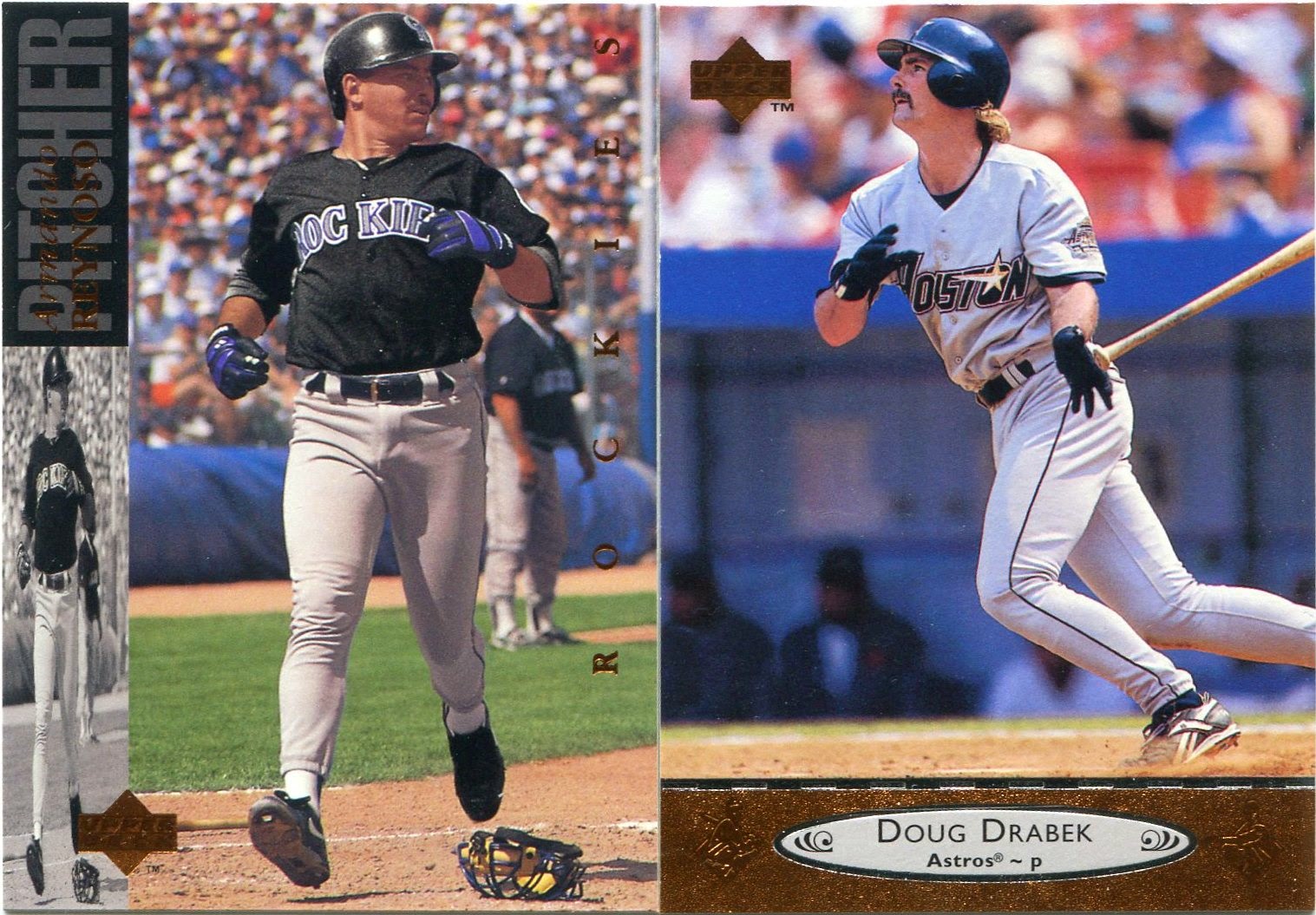 The same goes for cards like these of pitchers at the plate.

Or, um, on the basepaths.

Cards like the Reynoso have forced me to consider giving a new name to this mini-collection of mine. The "pitcher at the plate" moniker doesn't account for hurlers running the bases.

I'm still trying to come up with something better. 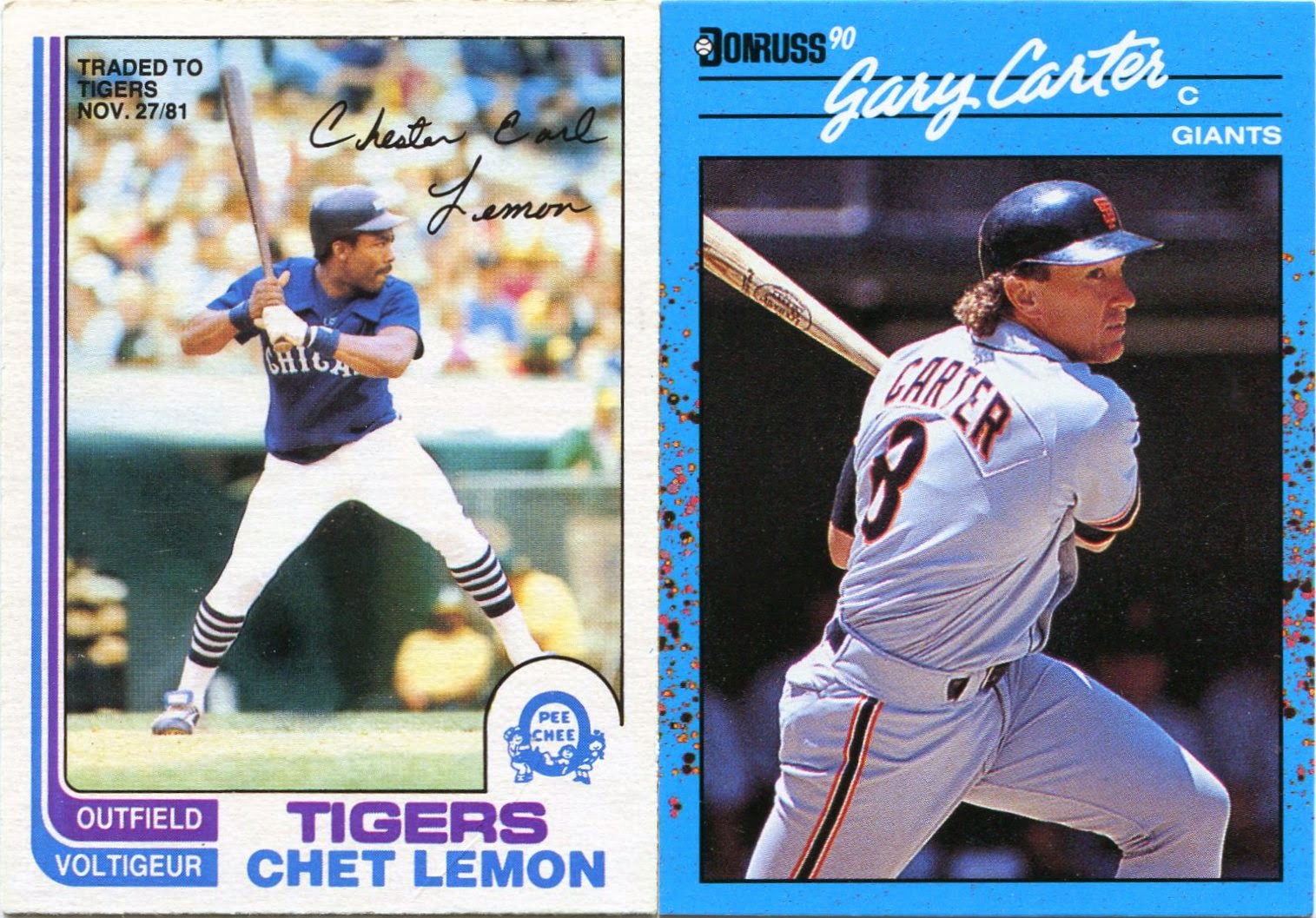 I've said this many times in the past, but you can never go wrong with these things. I will never tire of seeing the "Outfield/Voltigeur" designation on OPCs.

Heck, even oddballs from an atrocious set like 1990 Donruss are still welcome around here. 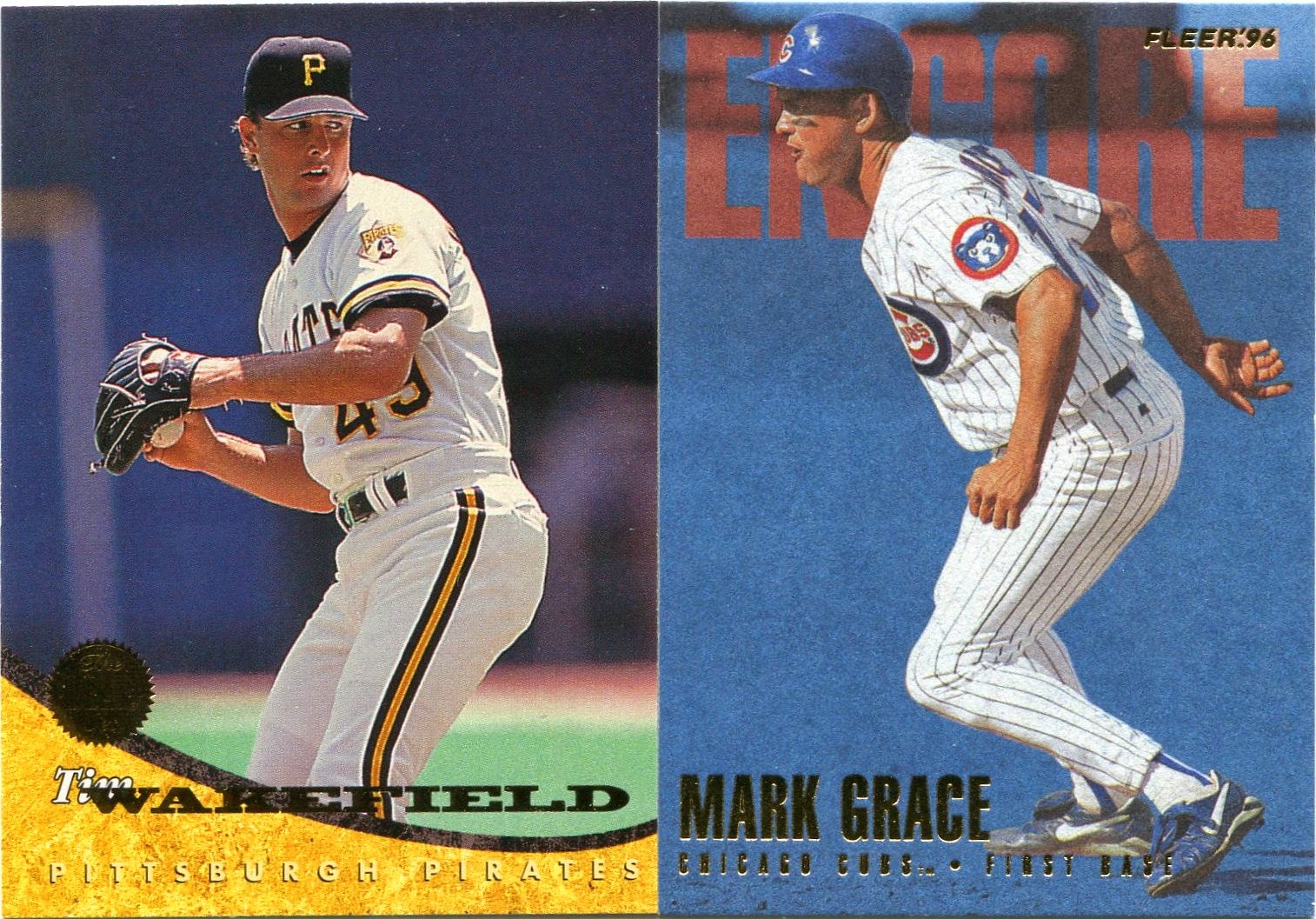 Mr. Spiegel even sent along a couple treasured player collection hits with this pair.

Though I hope I'm wrong, I think Tim Wakefield might be the last successful knuckleballer we'll ever see. 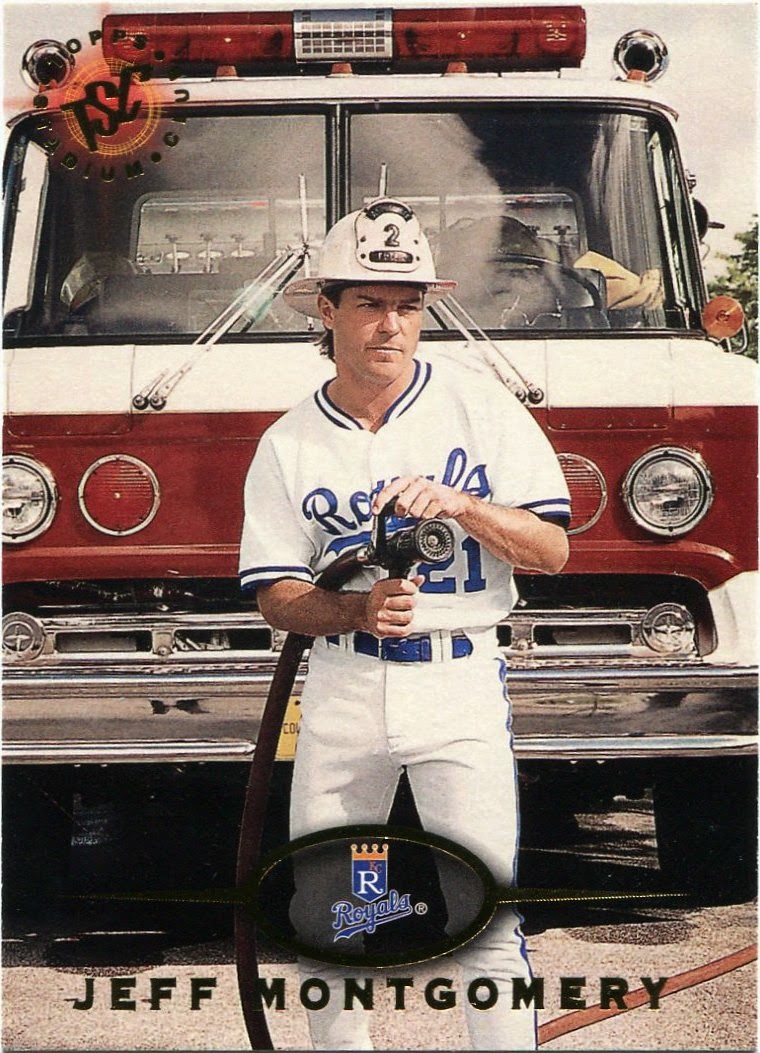 The real story of this trade package was Stadium Club.

I don't know where he found so many of them, but Mr. Spiegel stuffed a slew of mid-to-late '90s Stadium Club into this batch. If you've read any of my past writings, you should know how excited I was to see that.

There's a certain magnificence to Stadium Club that no other brand can match. Sure, Topps used the "fireman" theme for Jeff Montgomery on at least one other occasion in their history.

They really went all out with Stadium Club, though. Not only did Topps track down the obligatory fireman hat and hose, but they even recruited a real, actual fire truck for this photo shoot. 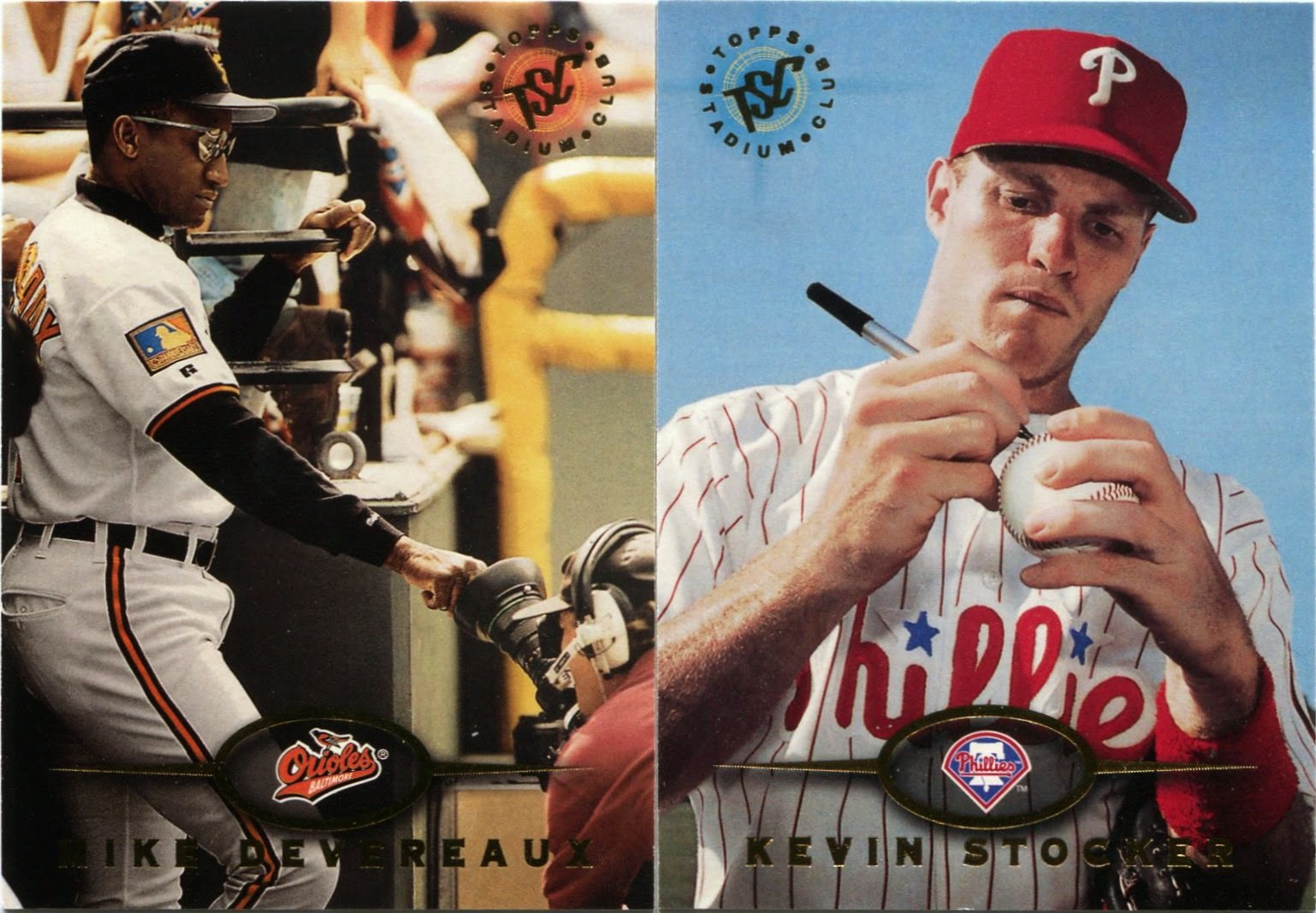 Though the Montgomery blows just about everything else out of the water, 1995 Stadium Club features a few other neat shots.

Mike Devereaux appears to be having quite a bit of fun with that photographer. 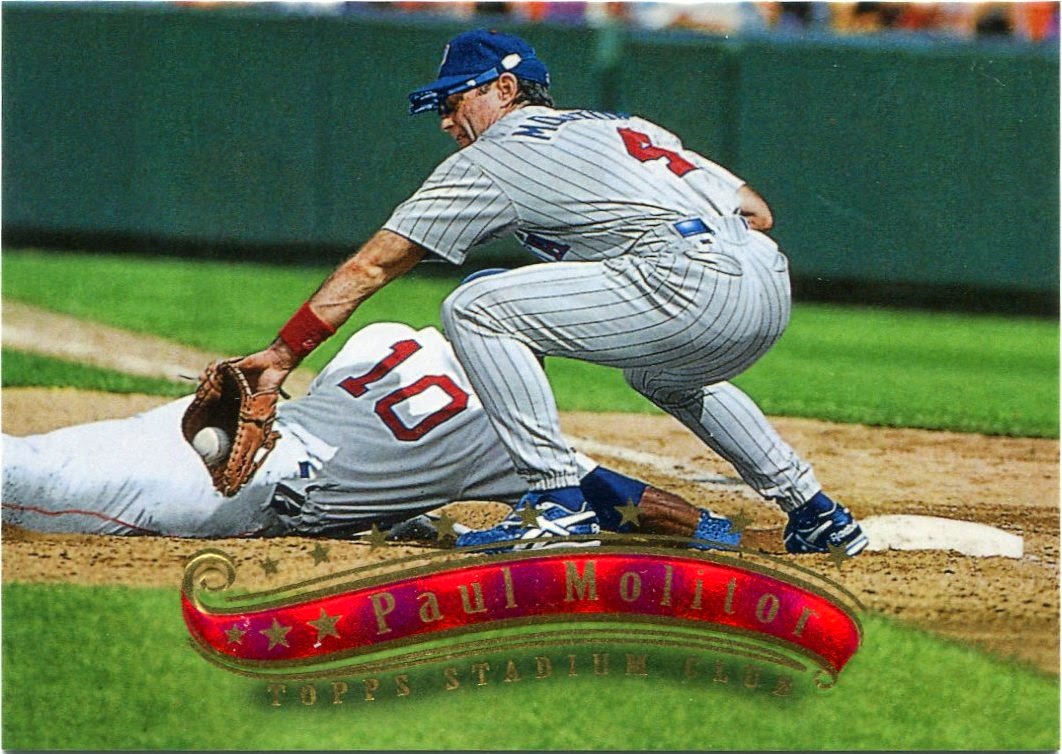 I love that elegant ribbon-esque nameplate. It's both eye-catching and unintrusive at the same time.

This shot in particular struck me as odd because Paul Molitor was almost exclusively a DH during his time with the Twins. Though he played in 161 games for Minnesota in '96, only 17 of those came at first base.

Thankfully, that didn't stop Stadium Club from granting him this fantastic pickoff shot. 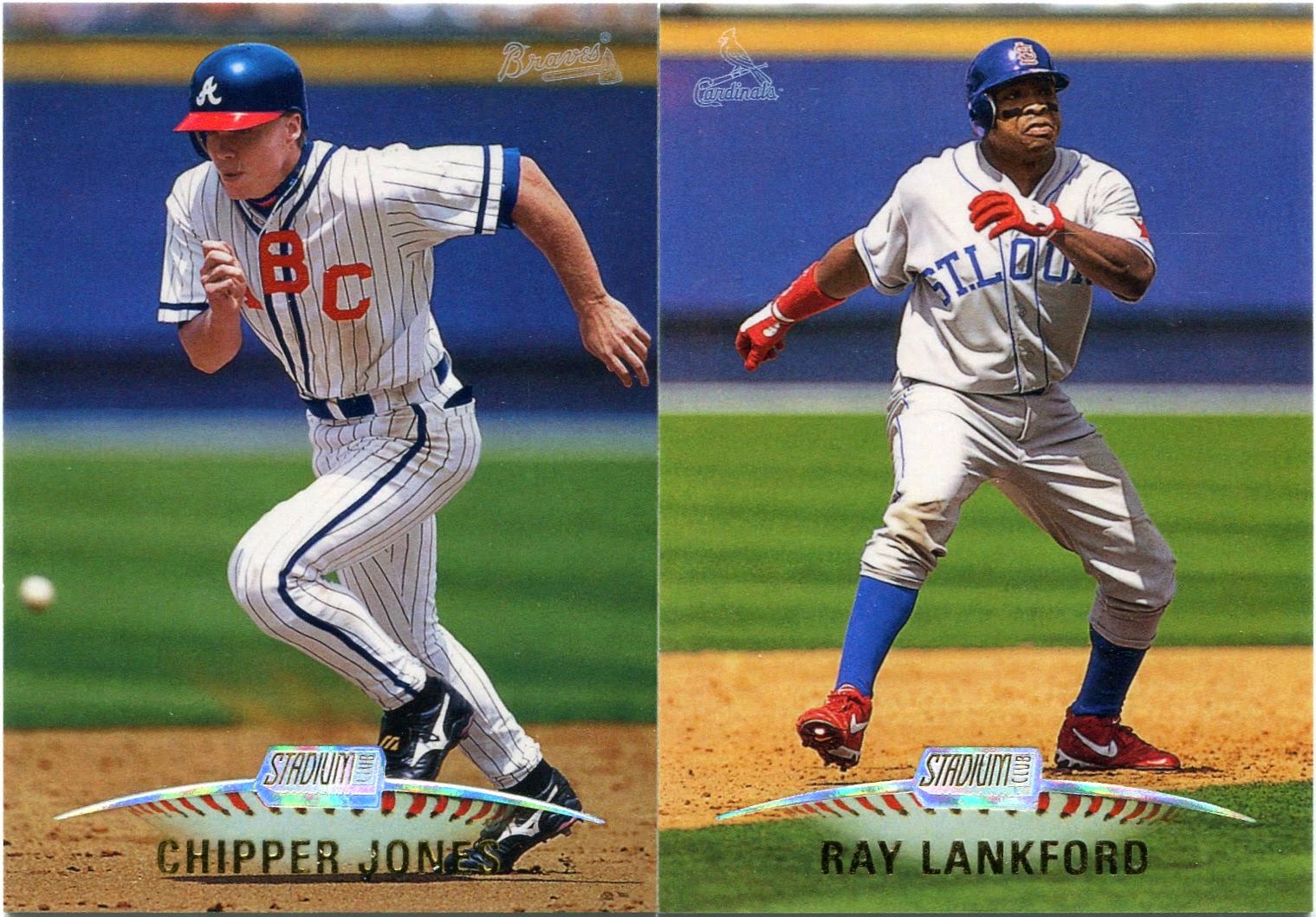 Thanks to my local flea market, I recently became much more acquainted with 1999 Stadium Club.

Neither of these two were in that glorious box, however. Both of these awesome throwbacks from Mr. Spiegel were new to me.

The uniforms seen here are Negro League jerseys worn by the Braves and Cardinals on August 1st and 2nd of 1998. The Braves honored the Atlanta Black Crackers, while the Cardinals did the same for the St. Louis Stars.

I know one thing for certain.

I will never tire of throwbacks. 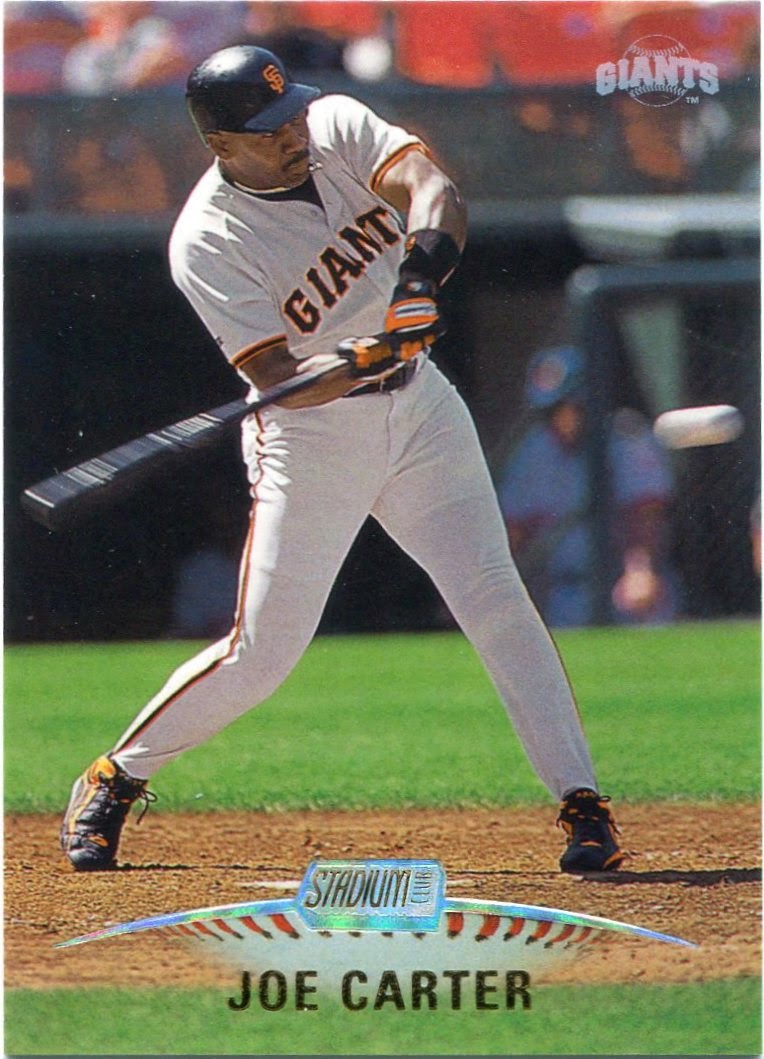 This was probably the most shocking development to come out of Mr. Spiegel's assortment.

While the photo is certainly nice, it's nothing out of the ordinary for Stadium Club.

No, what fascinated me was the fact that this is a card of Joe Carter on the Giants. I'm usually good with unfamiliar uniforms, but this one had somehow flown under my radar until this trade package came along.

Carter is forever ingrained in my memory as a Blue Jay, so seeing him as a Giant just doesn't look right to me. I've had this card in my possession for a couple weeks now, and I still can't wrap my head around it.

As I found out, Carter spent the final 41 games of his career in with the 1998 Giants, which makes this a hallowed "sunset" piece as well.

The surprises just never end for us card collectors.

I hope they keep on coming this summer.
Posted by Nick at 5:30 PM

I WANT A SUMMER VACATION!!!!

(Sorry, as you'll see from my post later tonight, you hit just the right nerve...)

Nick, I took summer classes,three at a time, and mistakenly took Statistics in mini-mester (6 weeks), NUTS. Even though I ACED it, I wouldn't do that again. Good luck, congrats, and ENJOY

I have been buying some random Stadium Club boxes from the greatest decade ever. I knew you would enjoy those that I included from the Stadium Club sets.