Into the Sunset, Pt. 25: Randy Johnson 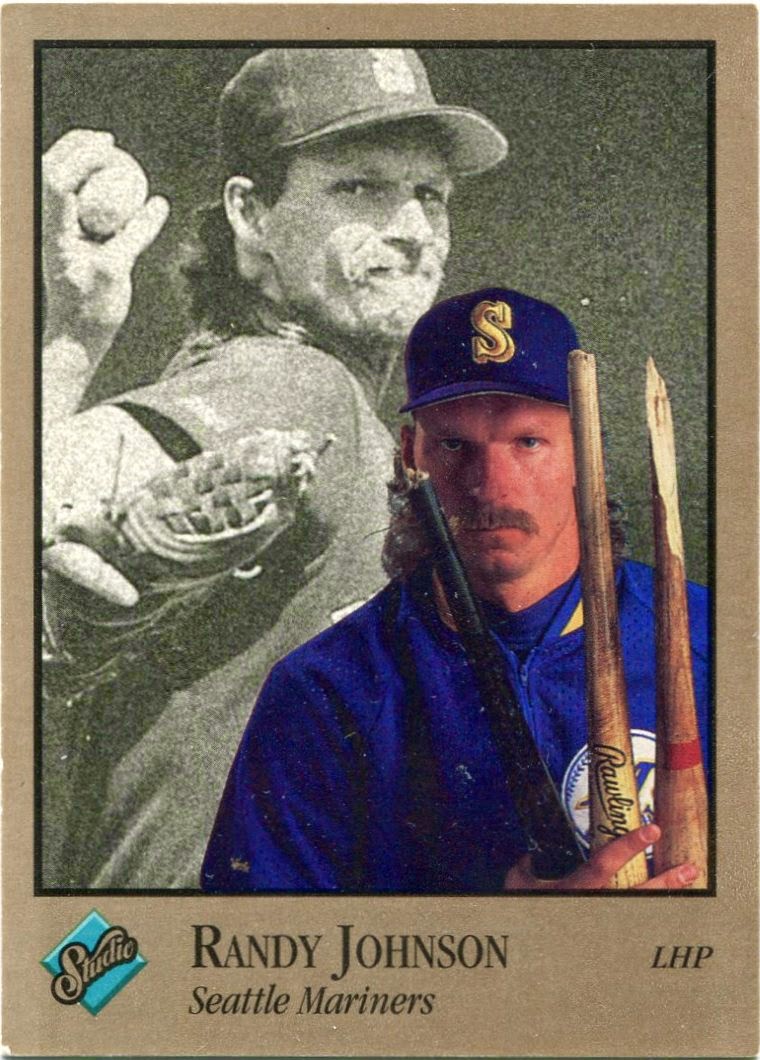 I'll admit, I was afraid to get hit by a pitch in Little League.

I could handle anything outside, but the inside fastballs would almost always get by me. Thankfully, nobody kept scouting reports in Little League.

This is why I have an insane amount of respect for any hitter who had to step in a batter's box against Randy Johnson. Taking a "Big Unit" pitch under the chin is no easy task.

Anyone who wants to argue about the toughness of baseball players should try to step in against a Randy Johnson fastball. That's all I'll say about that.

I have never in my life seen a more hulking figure on the mound than the "Big Unit". At a staggering 6'10" with long hair and a glaring stare, not many pitchers in baseball history (if any) instilled more fear into the batter.

Like a lot of other greats, though, his career went out with a whimper. He spent his final season in 2009 with the Giants, resulting in one of the better unfamiliar uniform stints in recent memory. 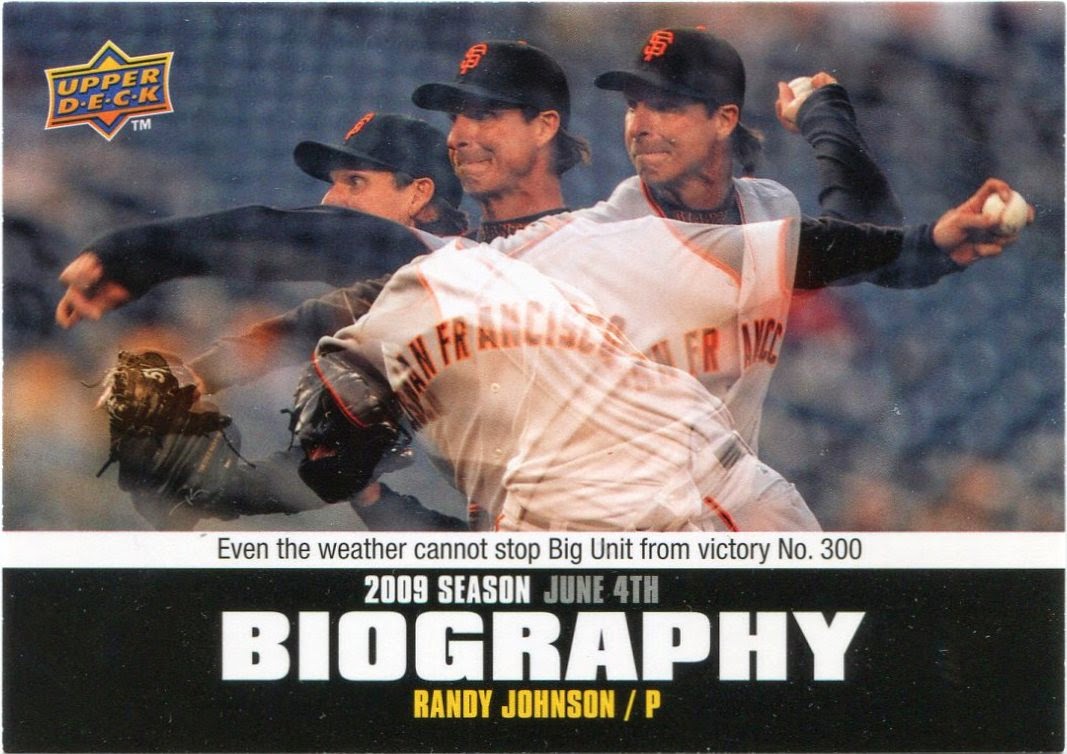 ...but he did pick up his 300th career win with the franchise.

That's really the only vivid memory I have of him as a Giant.

Such a historic milestone was worthy of the last multiple-exposure shot we've seen in the hobby, courtesy of this "Season Biography" insert from 2010 Upper Deck.

For whatever reason, UD omitted Johnson from what would turn out to be their final Flagship checklist. Thus, anything Upper Deck-related from 2009 qualifies as a "sunset" card. That's what my rules say, anyways.

Sadly, it wasn't the greatest year for Upper Deck. 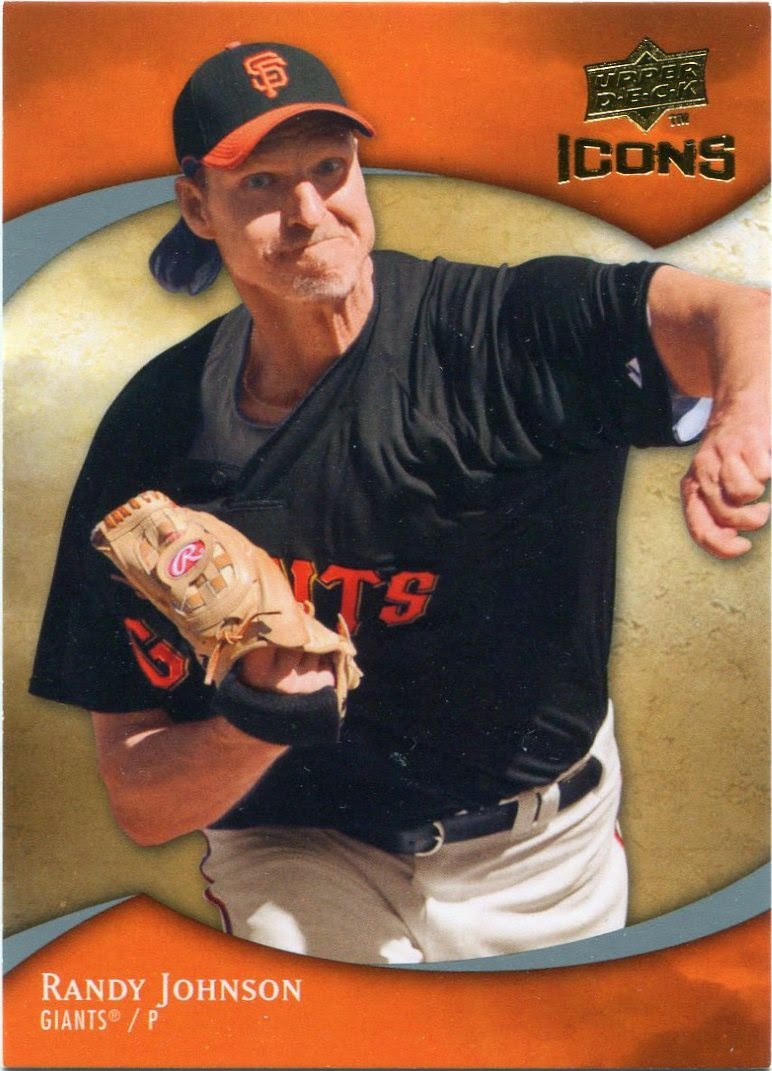 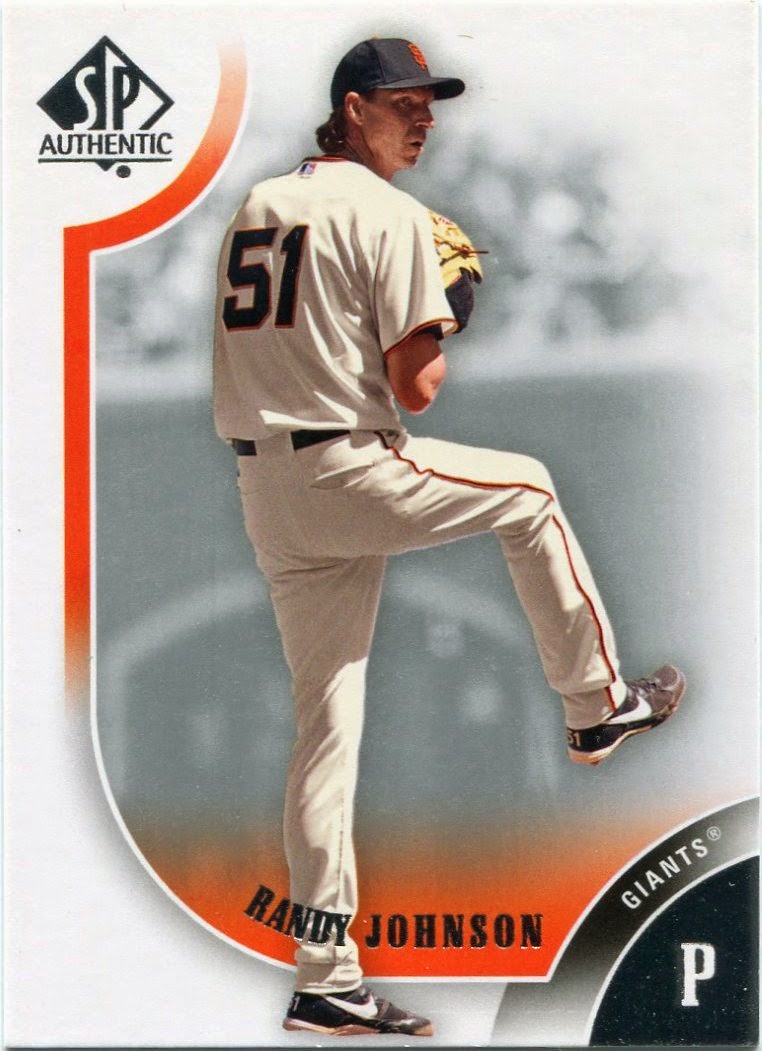 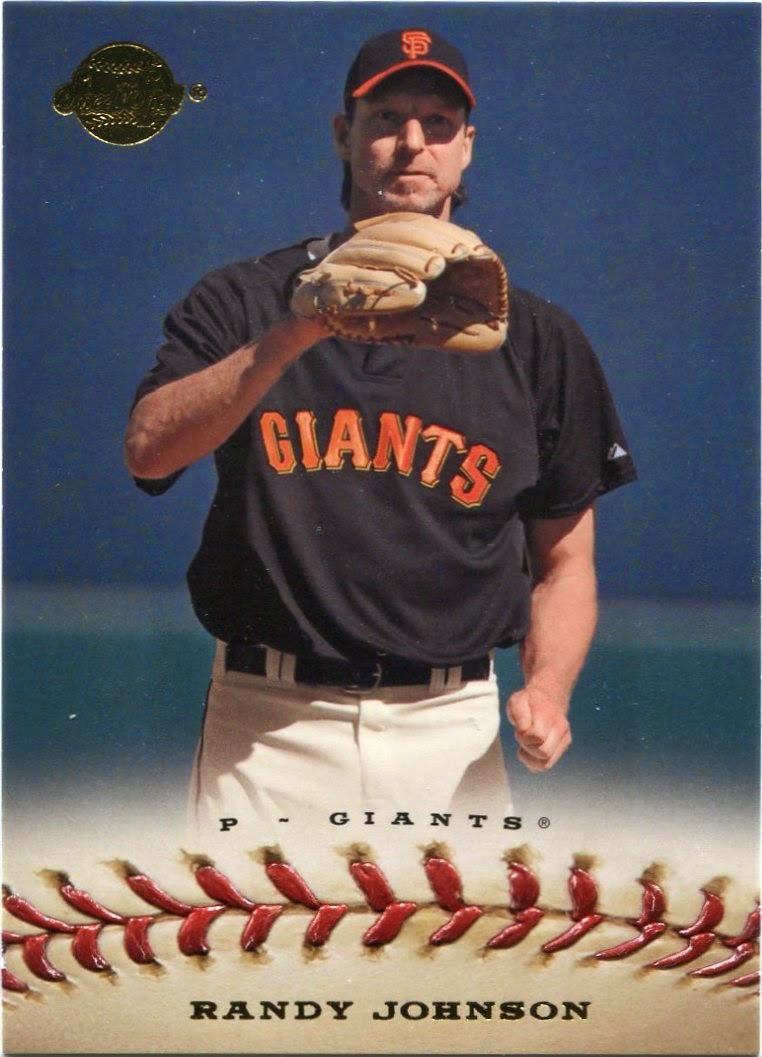 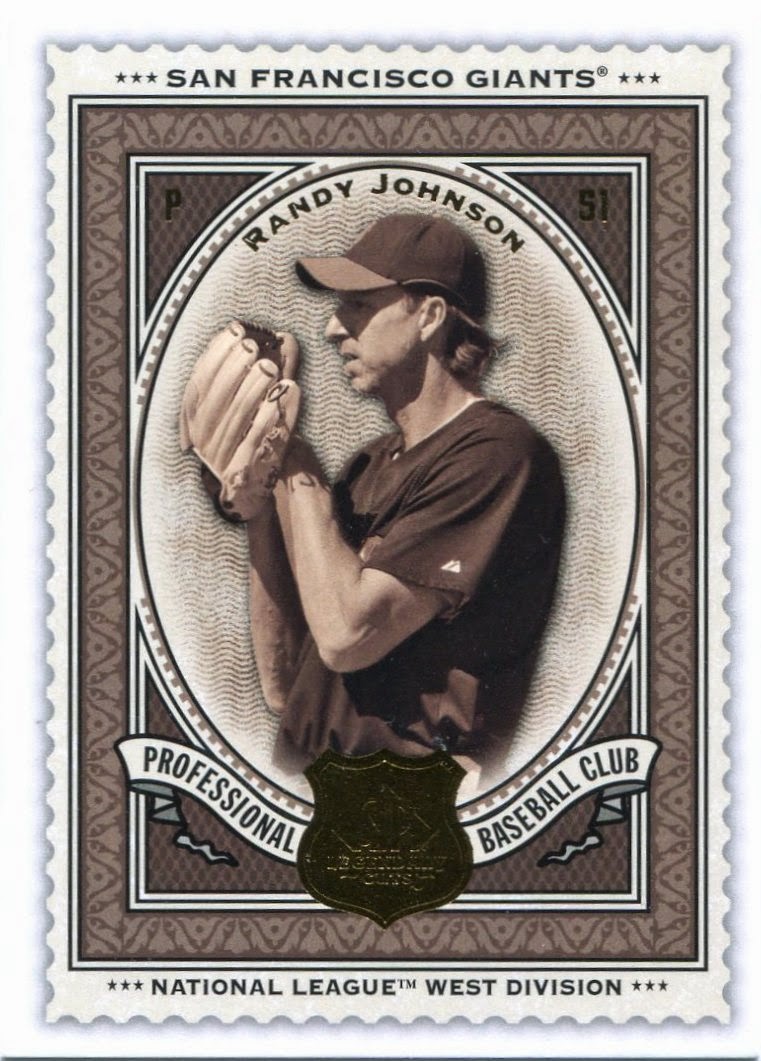 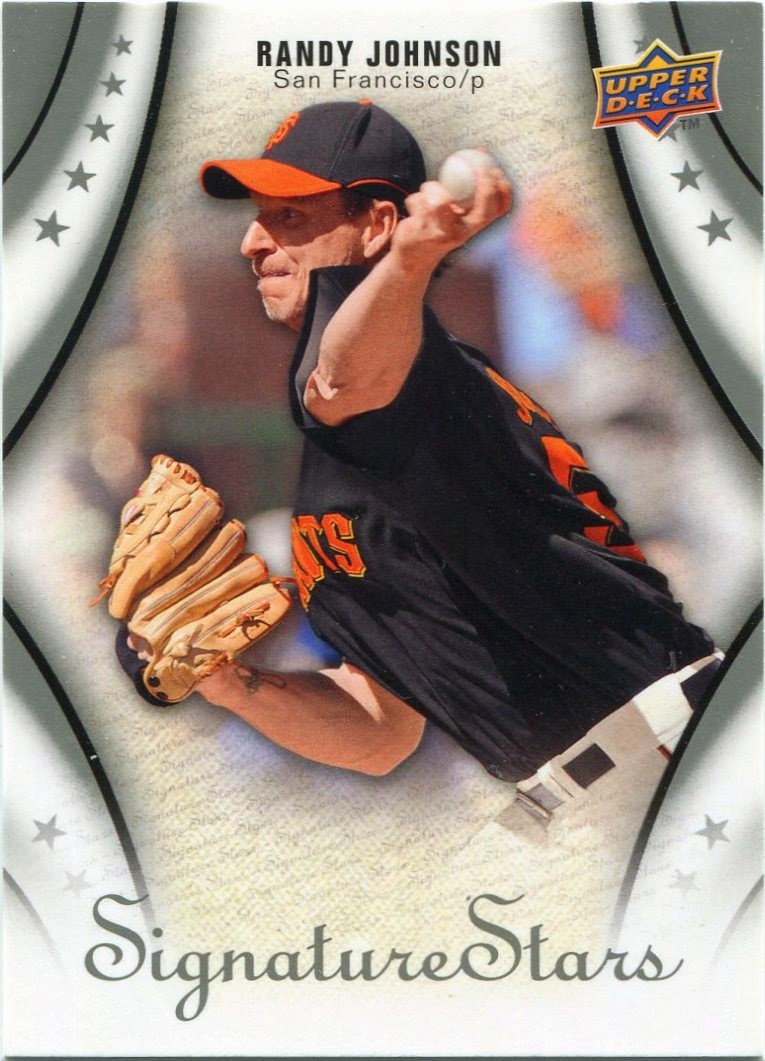 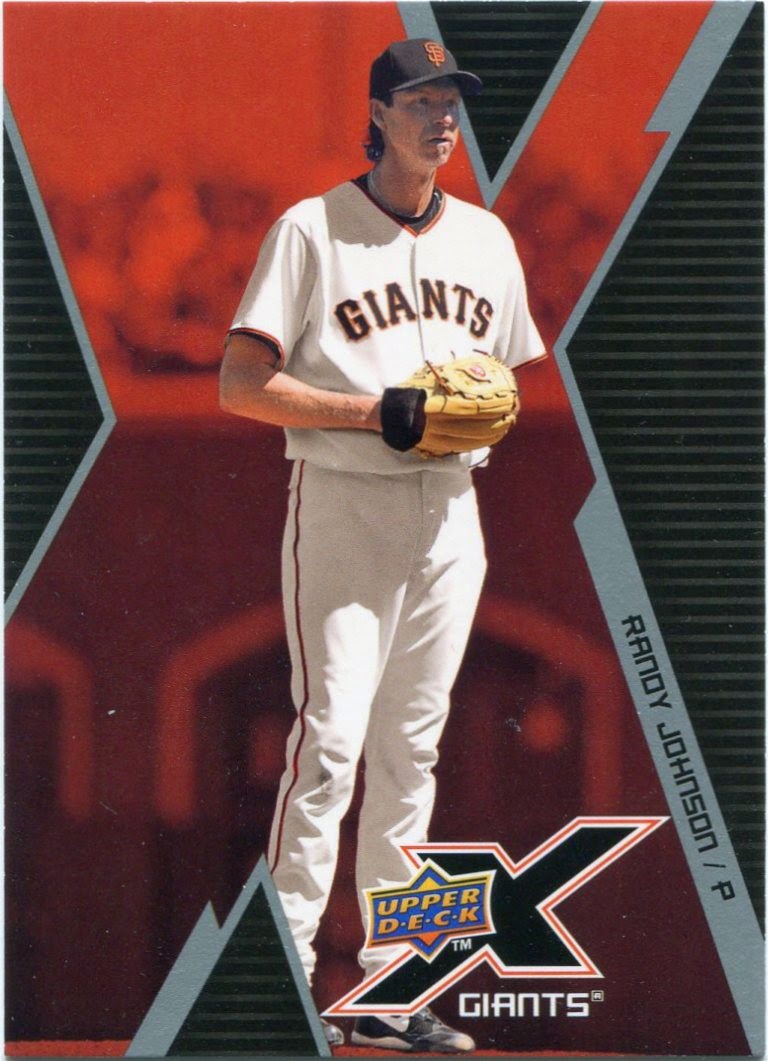 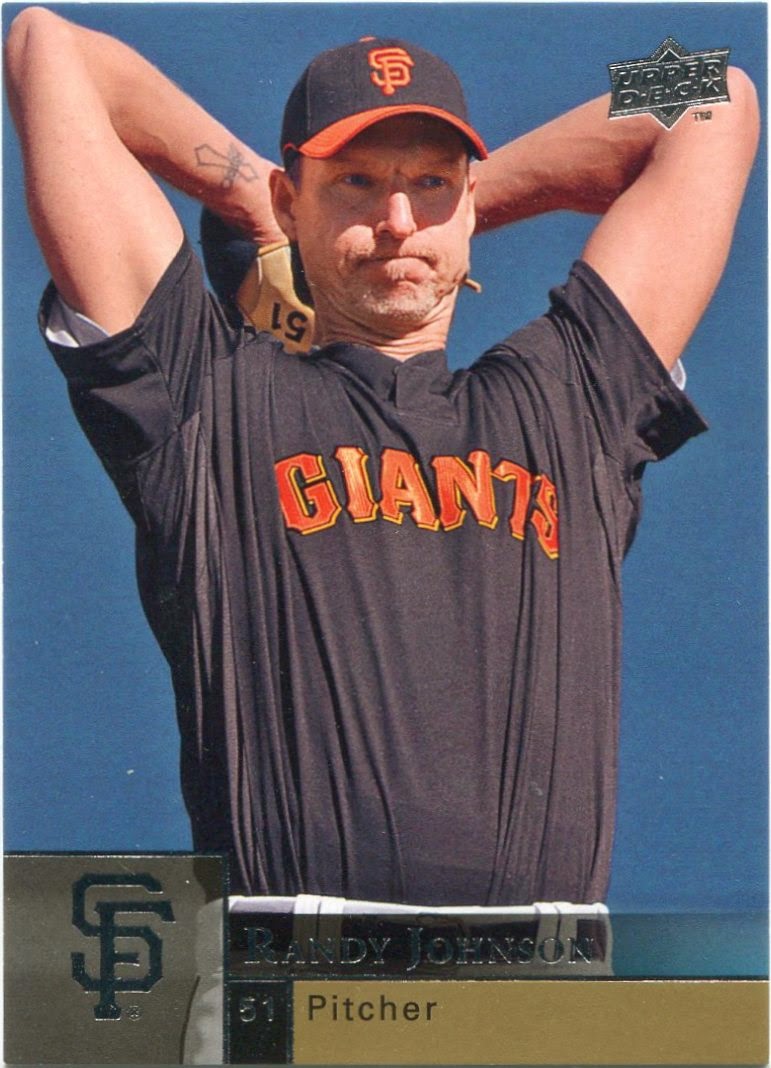 You kind of get the feeling why they were basically kicked out of the baseball card market after seeing these.

So many of their final designs were vastly uninspired. I have nothing but apathy for sets like UD Signature Stars and Upper Deck X. Even their final licensed Flagship design was unimpressive. I can't think of a single thing to write about them.

I mean, I appreciate the fact that they're all "sunset" cards, but my goodness.

What a lackluster bunch. 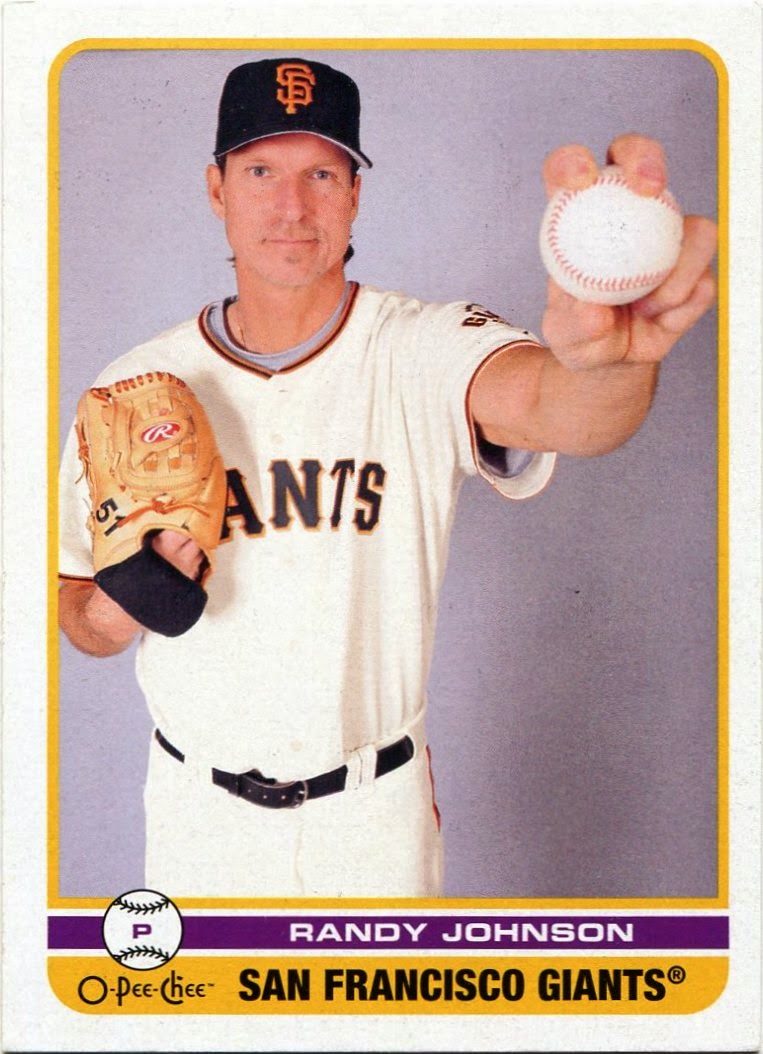 The only 2009 Upper Deck set that impressed me at all was O-Pee-Chee.

I'll go out on a limb and say this was one of the better sets we've seen in the last decade or so. It's the closest thing to Topps Total since, well...Topps Total. (Please don't make me beg for Total again.)

O-Pee-Chee has a few flaws, but it's a fine set overall. This is a perfectly acceptable "sunset" card by my account. I can't complain with that wonderful "grip" pose.

Plus, they managed to get a shot of the "Big Unit" grinning.

Few other companies can lay claim to such a feat. 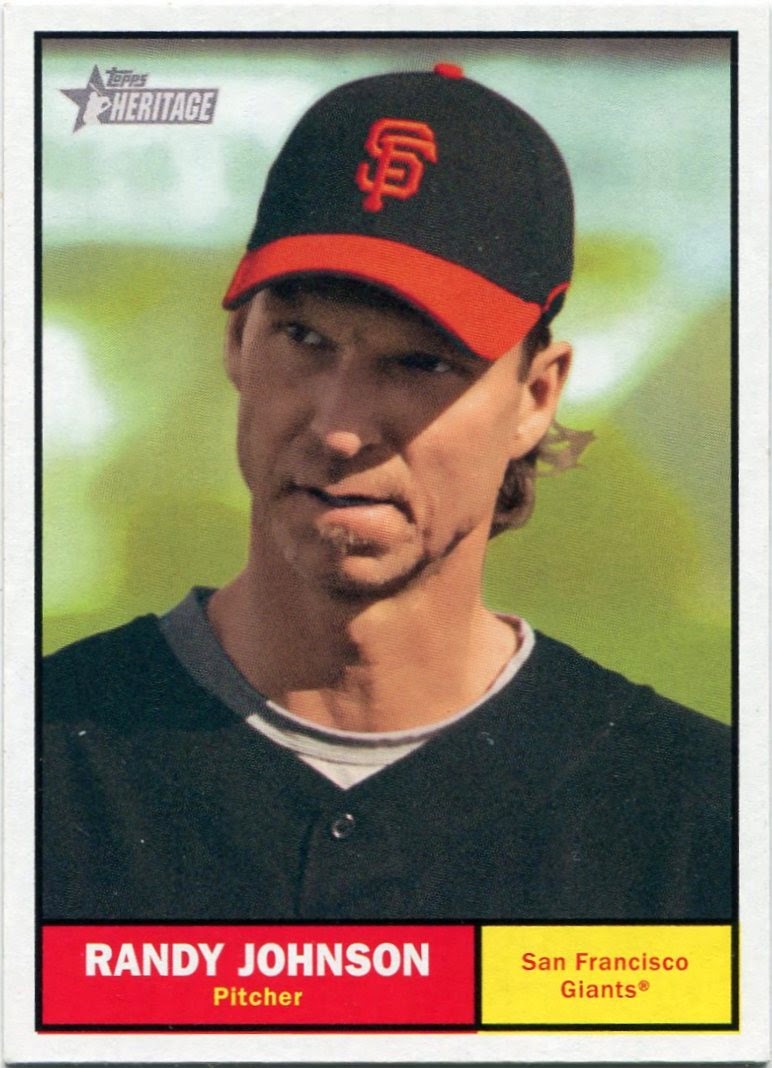 In 2010, of course, Topps began their monopoly on the hobby.

Upper Deck put out a semi-logoless Flagship set early on in the year, but lawsuits quickly put a halt on any other releases they had planned.

Topps was the only game in town.

I wasn't too up in arms about it at the time. I pretty much shrugged my shoulders and kept on chugging through the hobby. It's not the ideal situation, of course, but there's not much I can do about it. That's still basically my attitude these days.

That said, I'm not sure Topps put as much effort into their 2010 Heritage effort as they had in the past. I remember being decidedly unimpressed with it at the time.

It might be because I'm just not that big of a '61 Topps fan in the first place, but something seemed a little off about Heritage that year.

Still, I'll always commend it for producing a true Randy Johnson "sunset" issue. You know what that means.

Complete career stats on the back! 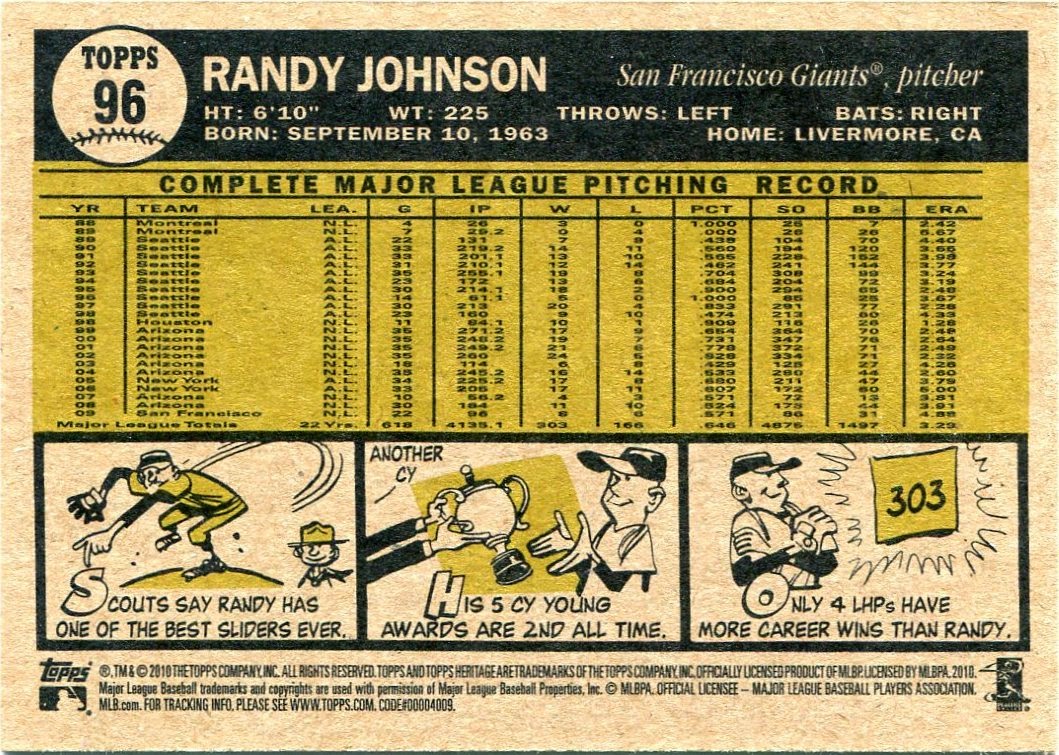 If you can read them, that is.

You need some sort of bionic vision to make head or tail out of those microscopic stat lines. I don't understand why Topps felt the need to cram those cartoons into an already overloaded 22 years of stats.

Don't try and read it.

You'll only hurt your eyes.

Had these been all of Randy Johnson's "sunset" issues, I would've been disappointed. Having such a dominant pitcher go out like that? 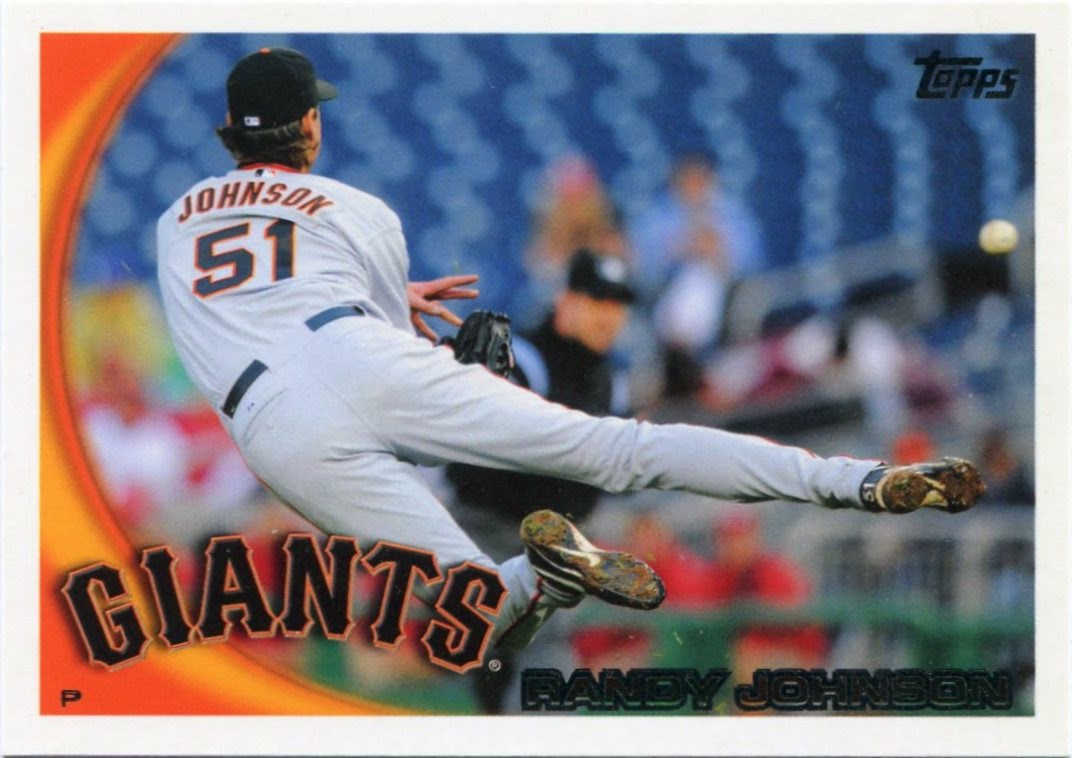 ...until this card came along.

This is, without a doubt, one of the premier "sunset" pieces in my collection. I'd argue that it's one of the best cards of the modern era. (It ranked in my Top 100 countdown.)

Plus, unlike its Heritage counterpart, it contains readable career stats on the back.

To have all 6'10" of Randy Johnson sprawled out into a beautiful horizontal frame was a work of genius by Topps. The fact that this gem of a play came from his 300th win added a bit of history to it as well.

I could stare at this card for seconds, minutes, hours...and still be mystified by it.

When it came to Randy Johnson's "sunset" collection, Topps truly saved the day.
Posted by Nick at 6:12 PM

That's a pretty sweet card. Back?

At first I thought that Studio card was something you'd custom altered. But that's not you're thing, is it? Can't believe I've never seen that one. I CAN believe that I've never seen the OPC, and you KNOW I gots to get me one...

As did this bird: