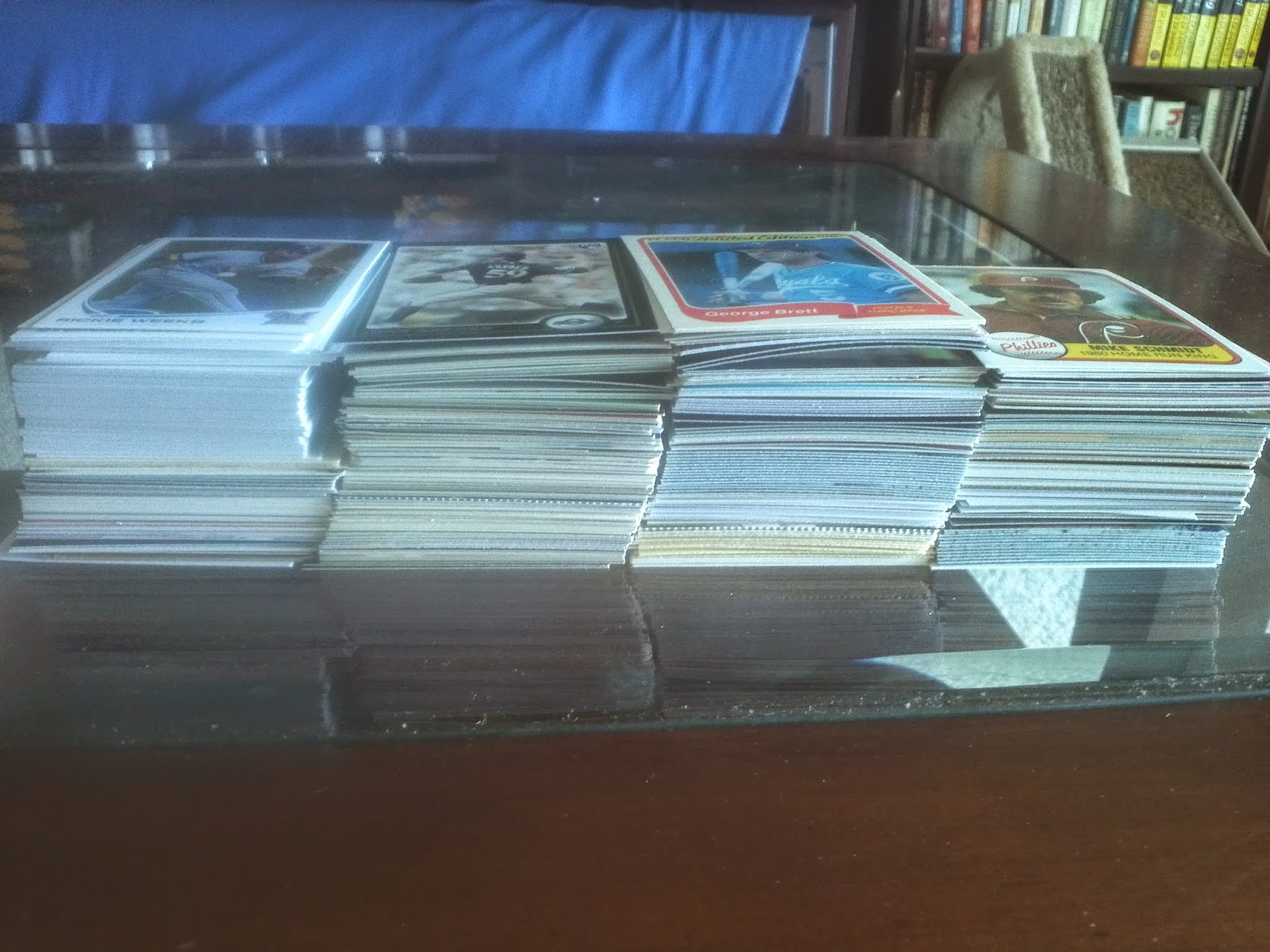 This weekend, I pondered what to do with the lone $20 bill in my wallet.

A part of me badly wanted to grab a blaster off the shelves of my local Target. I haven't ripped a ton of packs lately, and the itch to do so was starting to take hold of me.

I knew it wasn't the most fiscally responsible choice, but I found it hard to quell the urge. I very nearly made that trip to my local Target for a blaster. Thankfully, I managed to restrain myself.

Instead, I took that $20 to the local flea market yesterday.

Let's do the math. I probably would've gotten anywhere from maybe 50 to 80 cards out of a $20 blaster, only a fraction of which I'd actually need.

At the flea market, I scored the 350 hand-picked singles you see above for my collection, all for that very same twenty bucks. On top of that, I dug up an additional stack of cards for future trade packages and my fellow blogging buddies.

Did I make the right choice by choosing a trip to the flea market over a silly blaster? 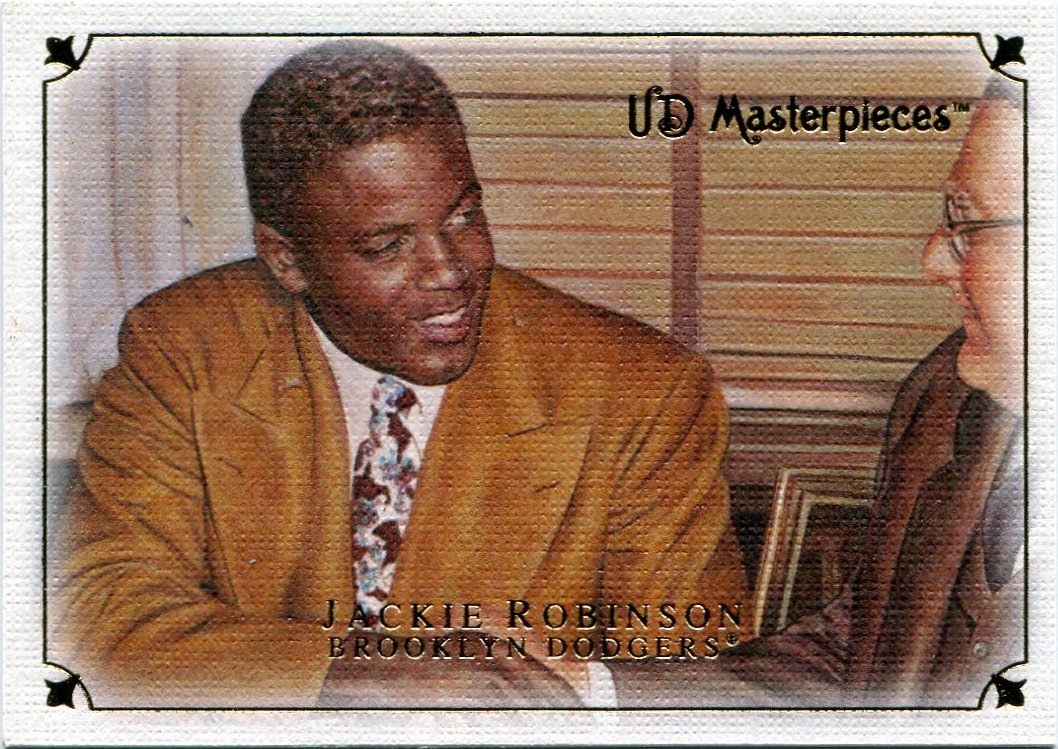 I certainly think so.

I even convinced one of my friends to come see what this flea market hubbub was all about. He bought himself something very reminiscent to one of these as a gag, and didn't mind me taking a few extended breaks to dig through some cards.

It didn't take long for me to spot the first table of cardboard gold. The vendor didn't have a whole lot, but it got my day at the flea market off to a promising start.

The guy had a glass case of dollar cards off to the side. The only one that interested me was this historic UD Masterpieces Jackie Robinson. I'd long had one of the framed parallels of this very card in my collection, yet had never managed to track down the base issue.

That definitely made it worth a buck to me. 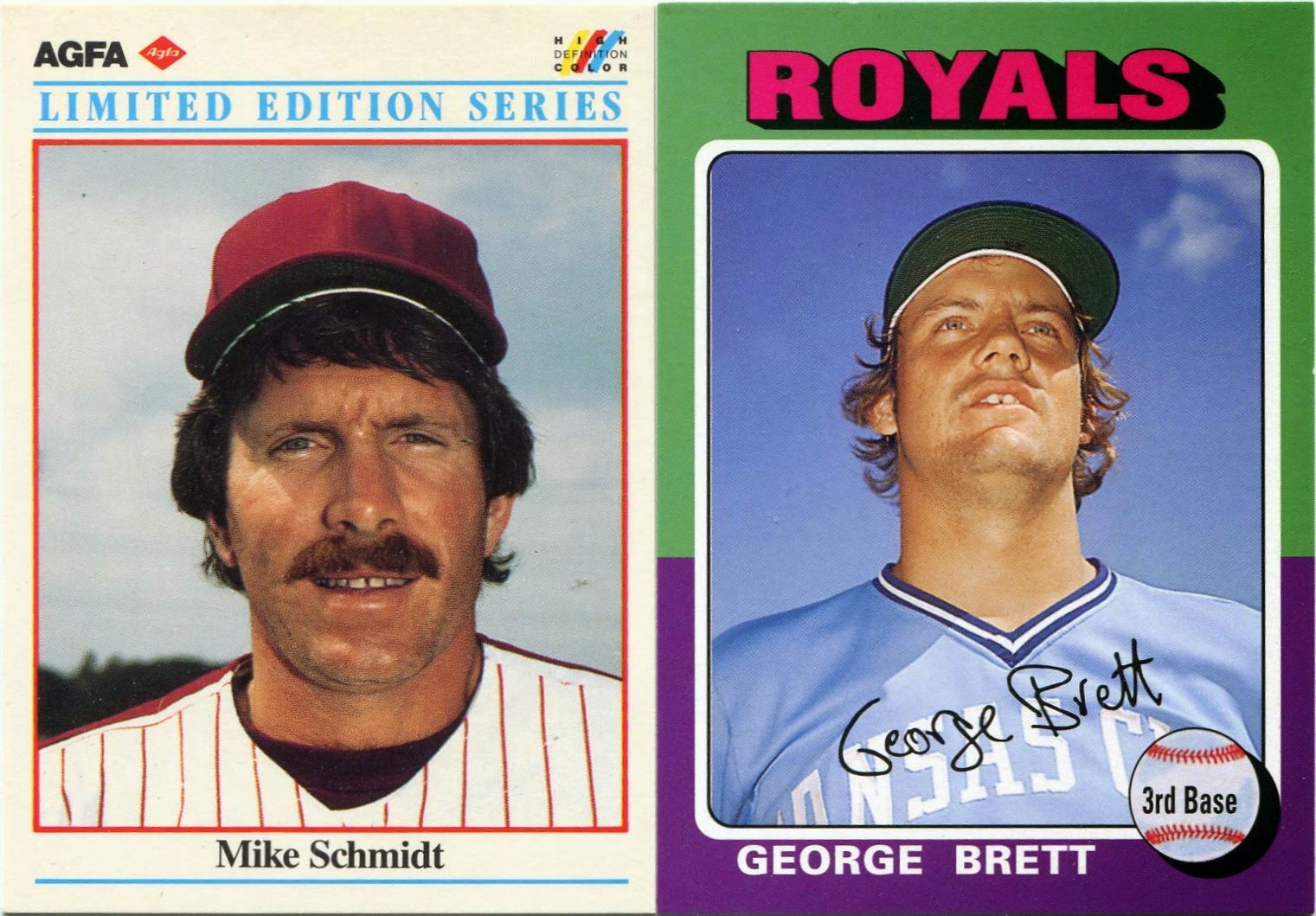 Next to the dollar case was a small sampling of quarter cards.

I only ended up picking out a bucks' worth of cardboard, but I tried to make it count.

Seeing as how these are two of the greatest third baseman in baseball history, I was more than happy to drop a quarter on each. 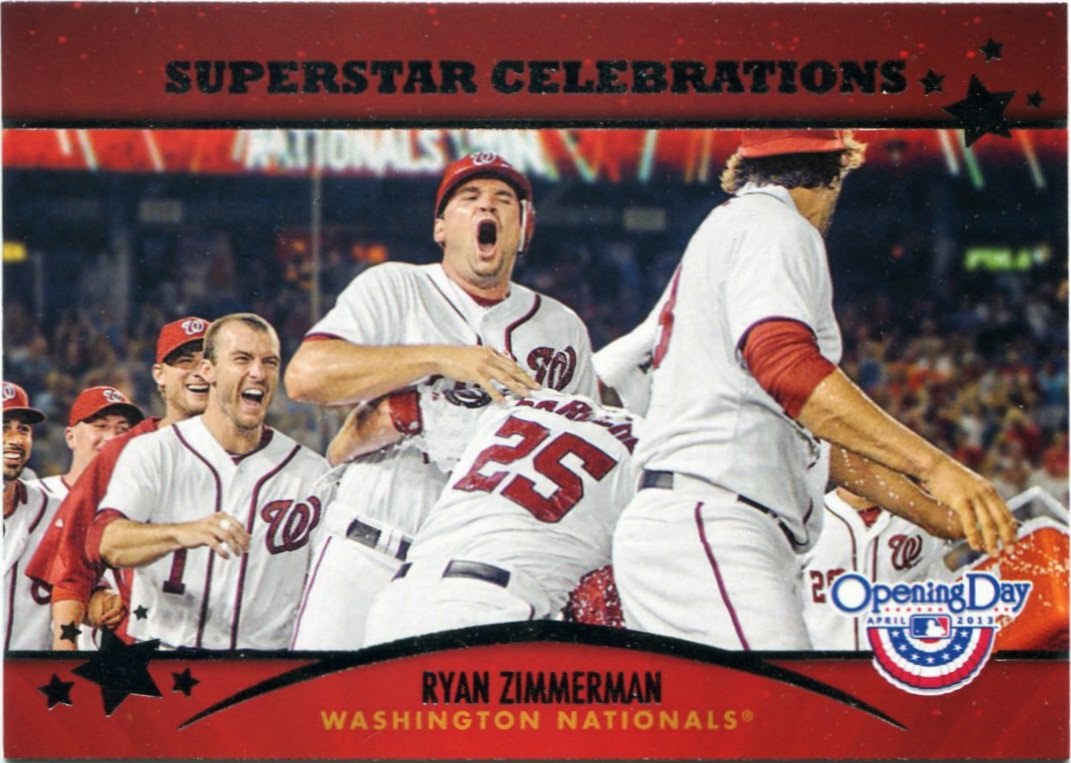 One question was on my mind all day.

Would my regular card vendors be there this week?

They hadn't been in attendance during my last trip to the flea market. Since the weather was so windy and dreary that day, I can't say I blamed them.

Yesterday, on the other hand, was a sunny and generally beautiful afternoon. I was hoping they'd be around.

Thankfully, I spotted one of my regular guys about halfway through my flea market journey. He seemed happy to see me. I've become a regular customer of his over the past three or four years.

I dug through his small sample of quarter cards while I asked him how the flea market was treating him so far. He had a few newer inserts available, so I plucked out a few to take home. Among my purchases was this strange Ryan Zimmerman card.

I didn't realize they made X-rated versions of these "Superstar Celebrations" inserts. 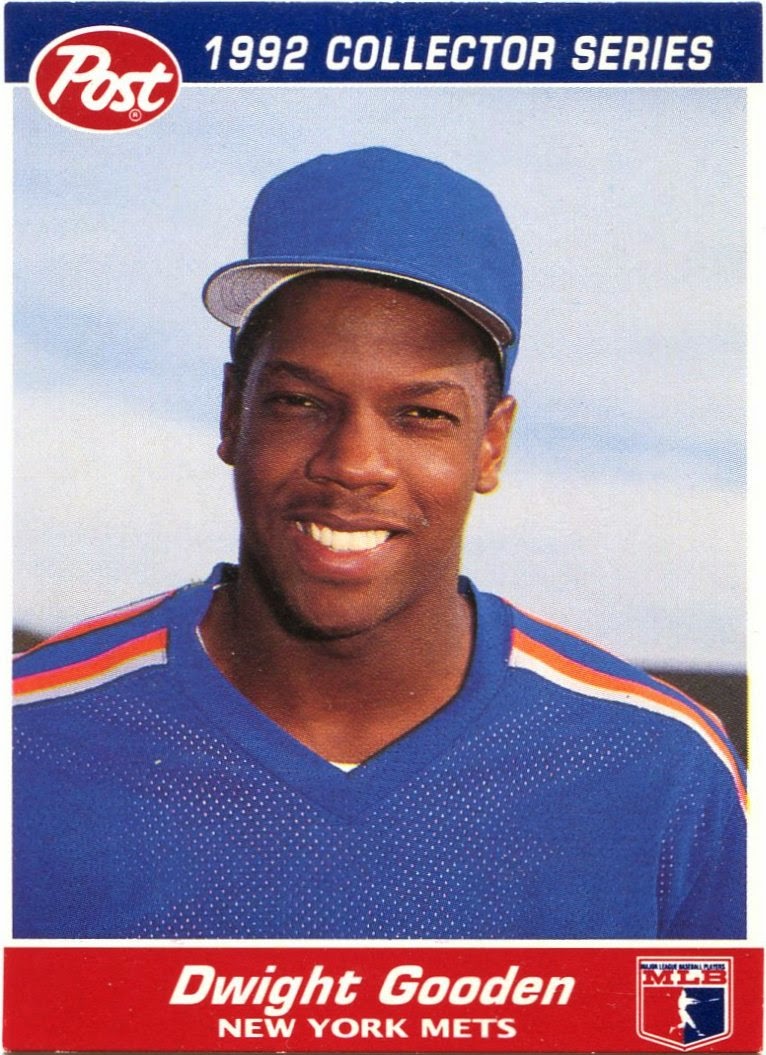 The real draws of this guy's table, however, are his dime boxes.

He doesn't get new stock in that often, but I was happy to see he had an entirely new array of dime cards on display yesterday.

I spent a good 20 minutes digging through his inventory, coming away with about four dollars' worth of dime cardboard.

I couldn't pass up the opportunity to land a new Doc Gooden oddball for a shiny FDR. 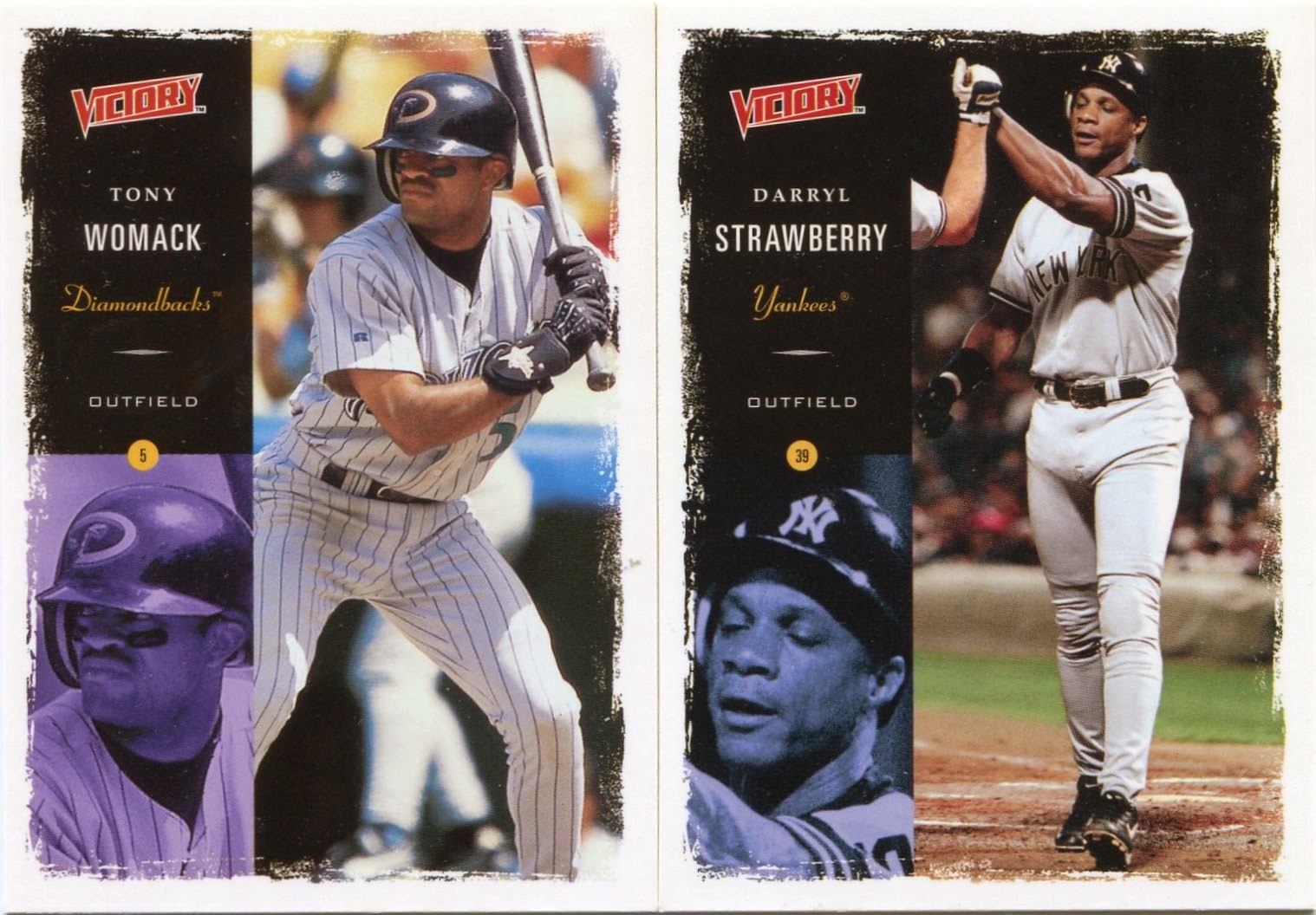 Nearly a whole row of one of his dime boxes was filled with 2000 UD Victory singles.

These things are loud, cluttered, and generally forgettable. Yet, for some reason, I've long had a weakness for them.

I can't explain it. 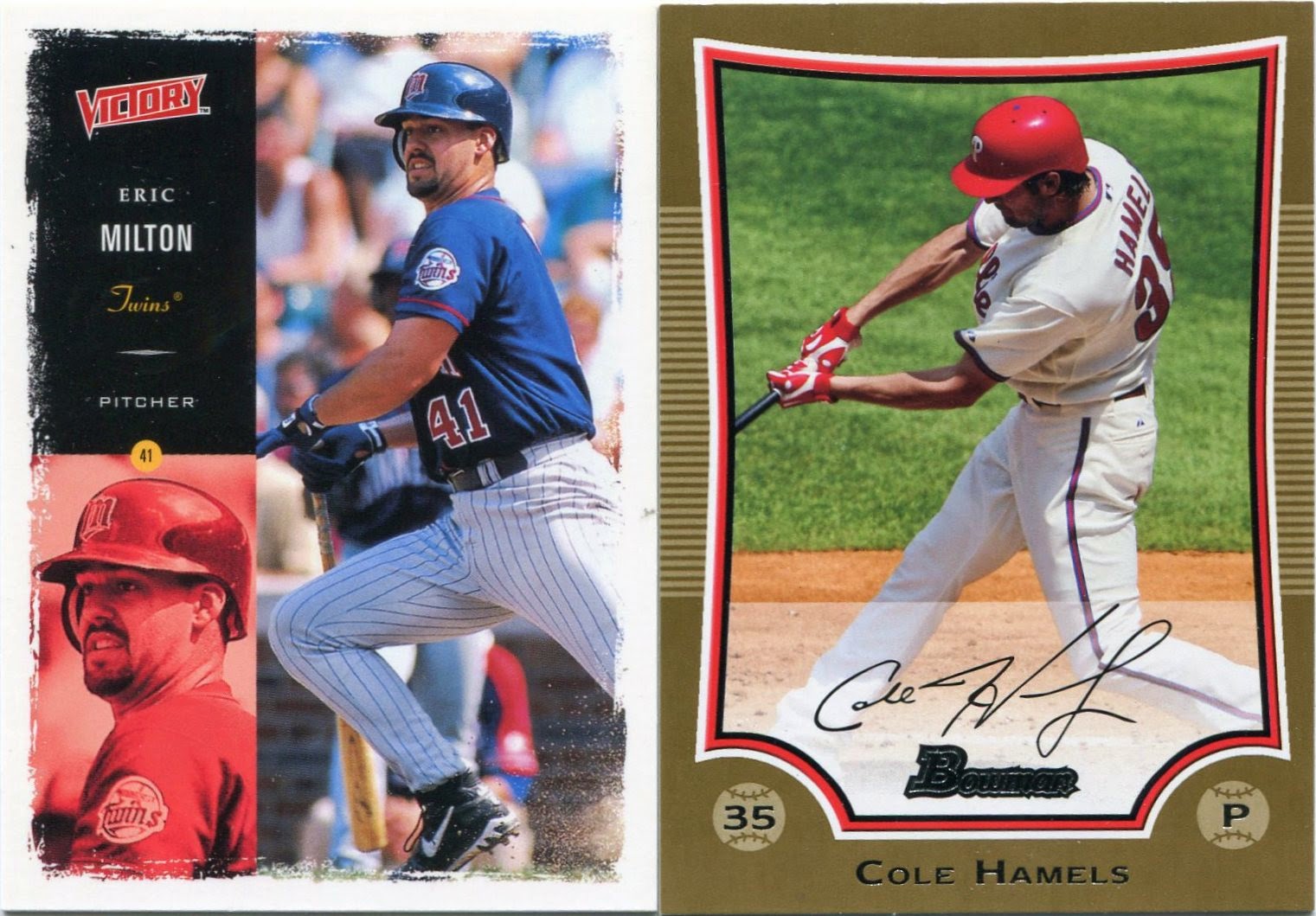 As usual, the dime gods were good for a few mini-collection hits.

You can never go wrong with pitchers at the plate. 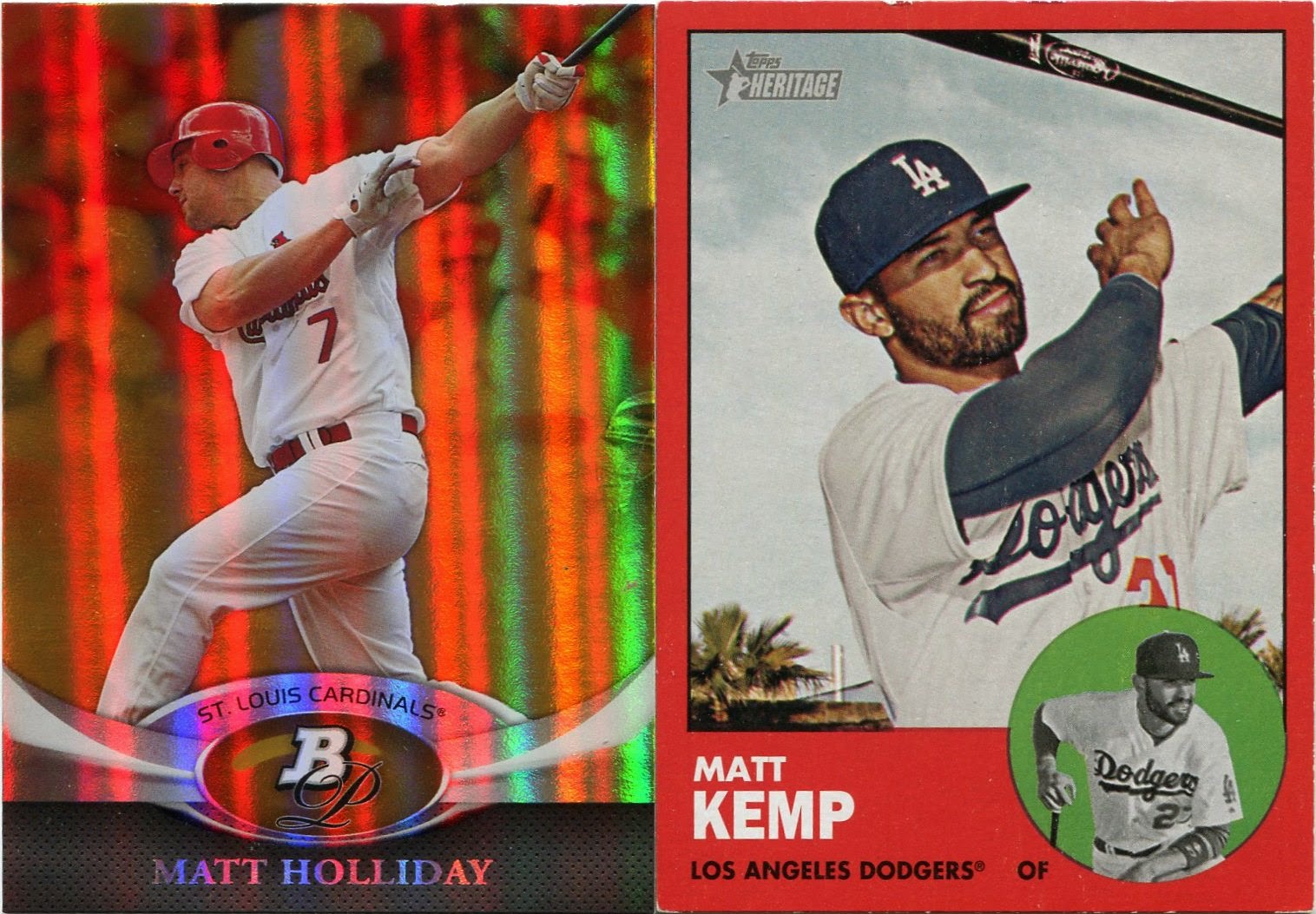 I even found a couple striking parallels for just a dime a piece as well.

My decision to start a Matt Kemp collection is beginning to pay dividends. 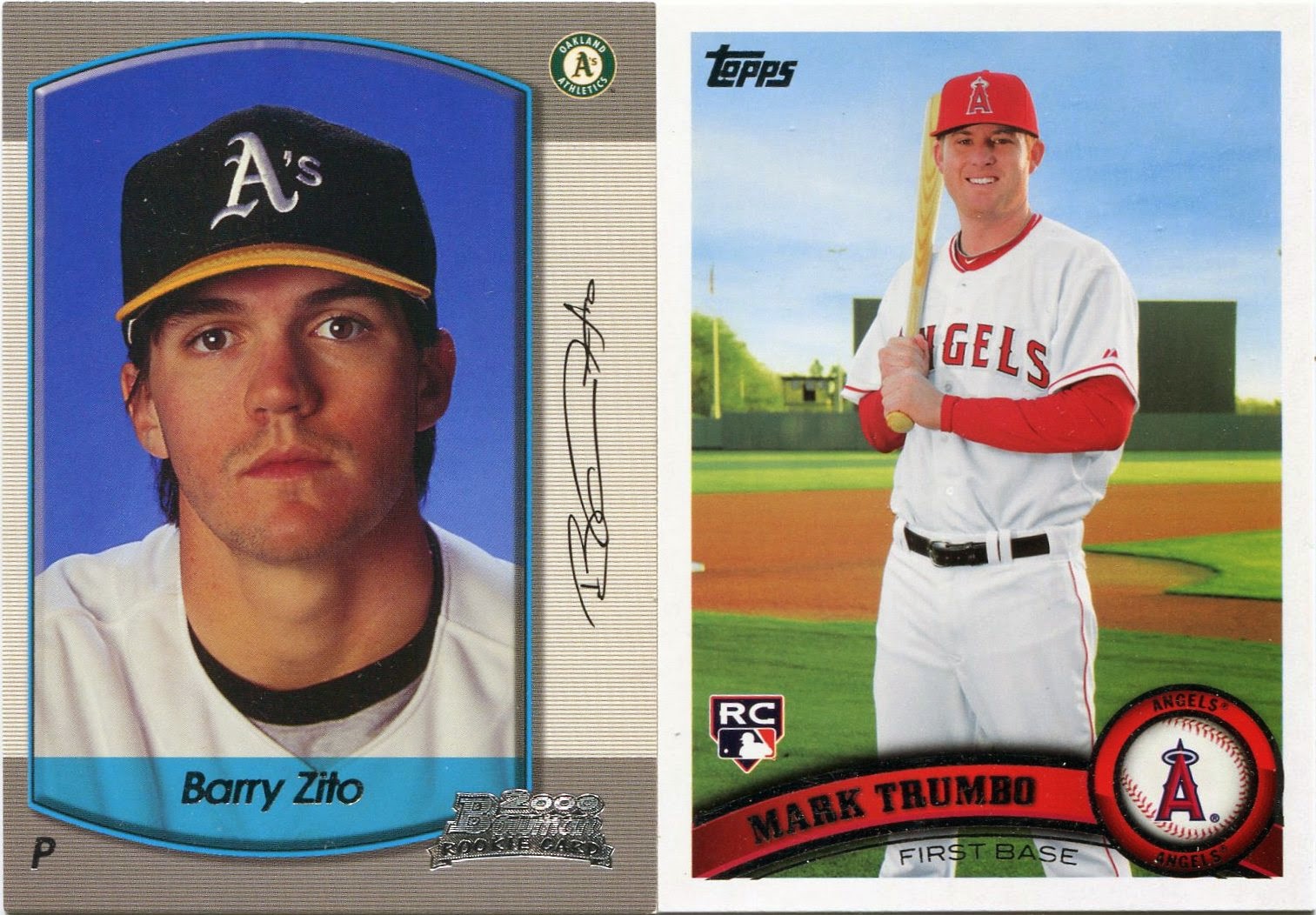 I'm still floored at the quality of rookies I continue to unearth in dime boxes.

You'd think that the majority of first-years you'd find would be no-namers who never made it to the majors.

While there are a fair amount of those, it's not all that hard to find rookies of names like Zito and Trumbo for dimes.

All the more reason to love the world of dime boxes. 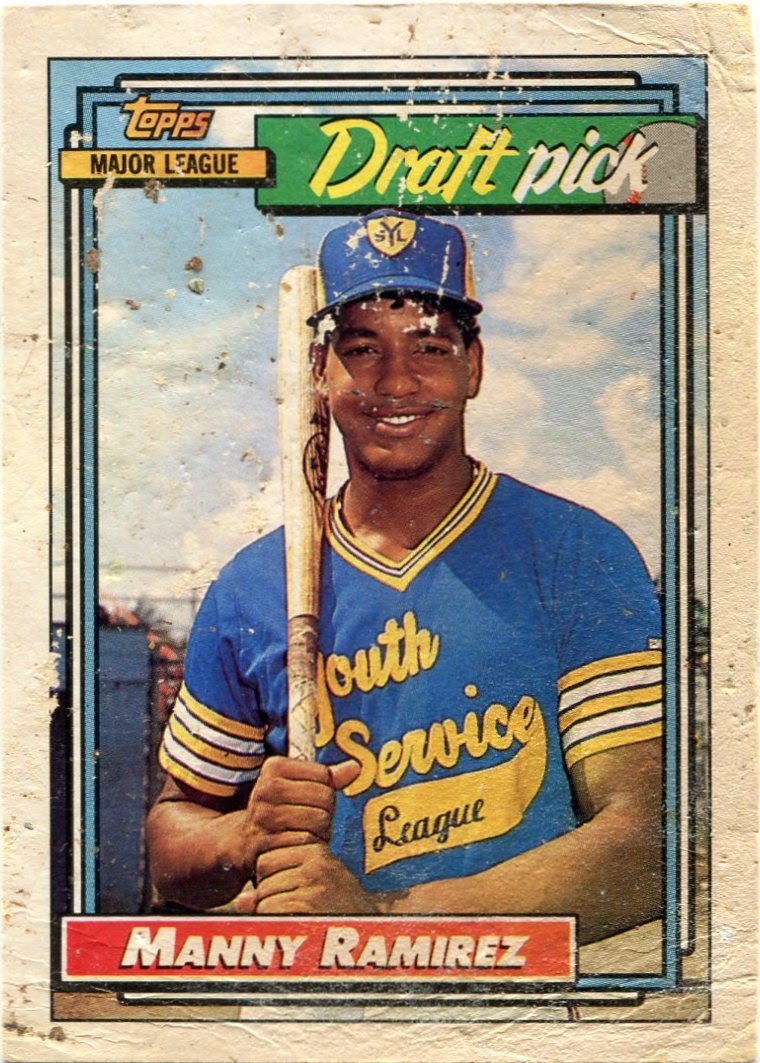 This was by far the most interesting card I pulled from this guy's dime box.

For full disclosure, I should mention that I already have a well-conditioned copy of this 1992 Topps Manny Ramirez rookie in my collection.

Still, when I saw this mangled one in a flea market dime box, something inside me just couldn't let it go. You don't find miserable cards like these all that often.

As you can tell, this Manny is horribly creased, chipped, and generally beaten. With the amount of water damage it appears to have, I wouldn't be surprised if it'd been living in a swimming pool for the last twenty years.

But, for whatever reason, someone saved it. And it somehow wound up in this guy's dime box.

Although I'm not exactly sure what I'm going to do with him, I welcomed the downtrodden Manny into my home. 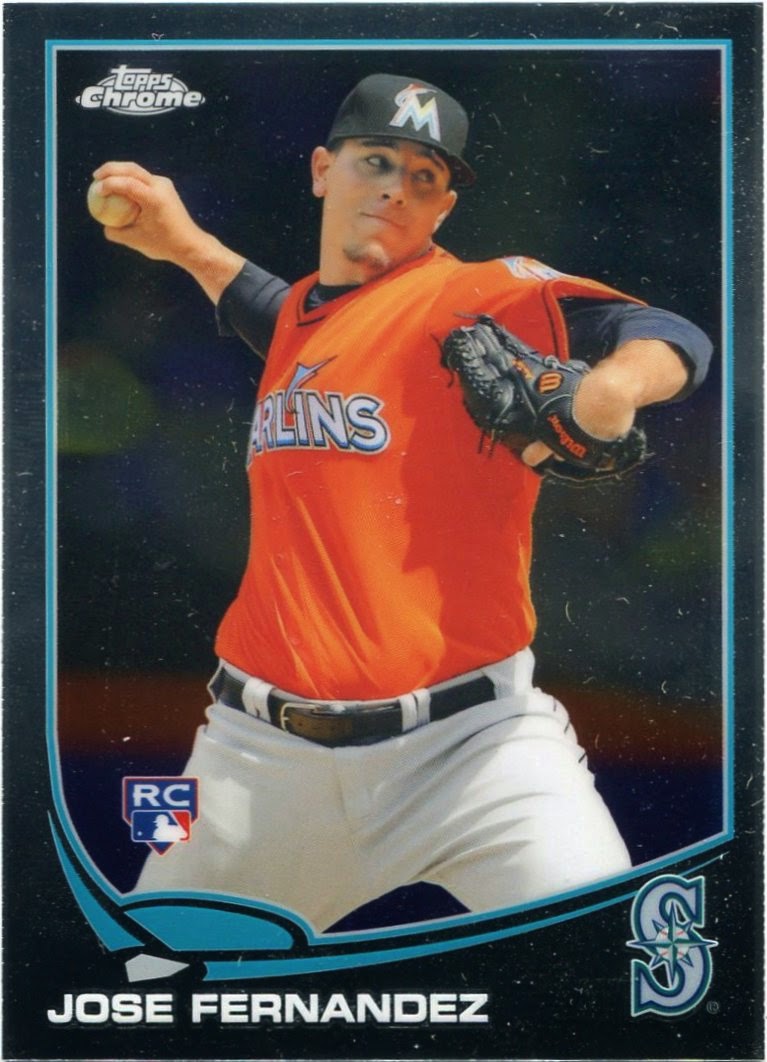 Shortly after I finished up with one of my regular vendors, I stumbled upon a guy I saw the last time I hit the local flea market.

He recognized me and seemed eager to unload some cardboard. Almost instantly, I spotted this Jose Fernandez rookie in his miscellaneous box without a price. I wanted it for a few reasons.

1) I've become a big Jose Fernandez fan over the past year. Of course, I was devastated to hear that he had to undergo Tommy John surgery last week.

2) Fernandez is actually four months younger than me, and he already has a Rookie of the Year award and a Top 3 Cy Young finish under his belt.

3) This card is a treasured new addition for my error collection. I guess the people at Topps quality control somehow didn't notice the Mariners logo in the bottom-righthand corner.

I asked the guy if he'd take a buck for it. 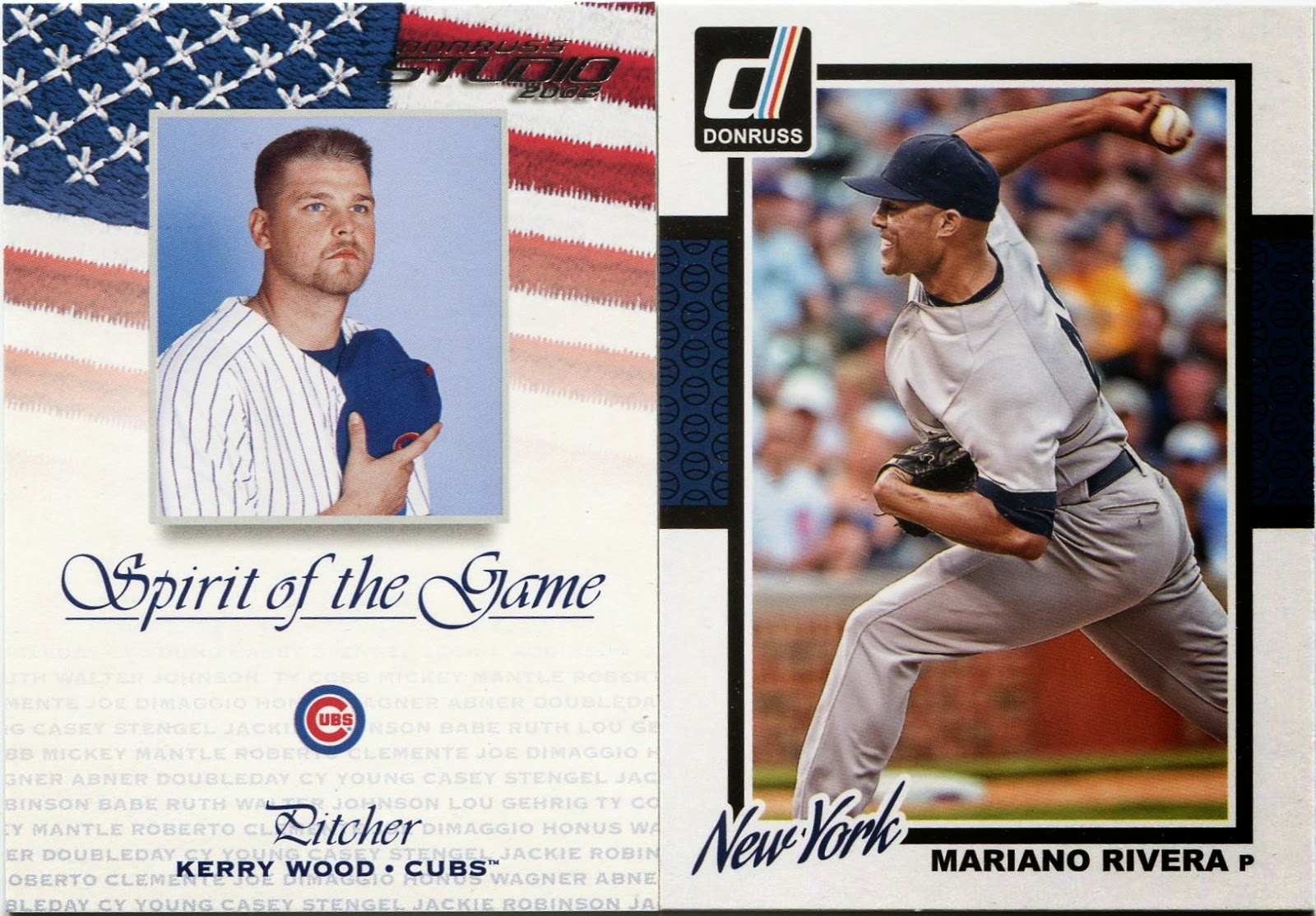 When I hit his table a few weeks ago, the guy had a quarter box on display.

This time, however, it had magically transformed into a 5/$1 box. Either he was willing to cut me a discount as a repeat customer, or he just really wanted to get rid of his cards.

Either way, I was happy to land these two at a mere 20 cents a piece.

I can't turn down a Mariano Rivera "sunset" card at that price. 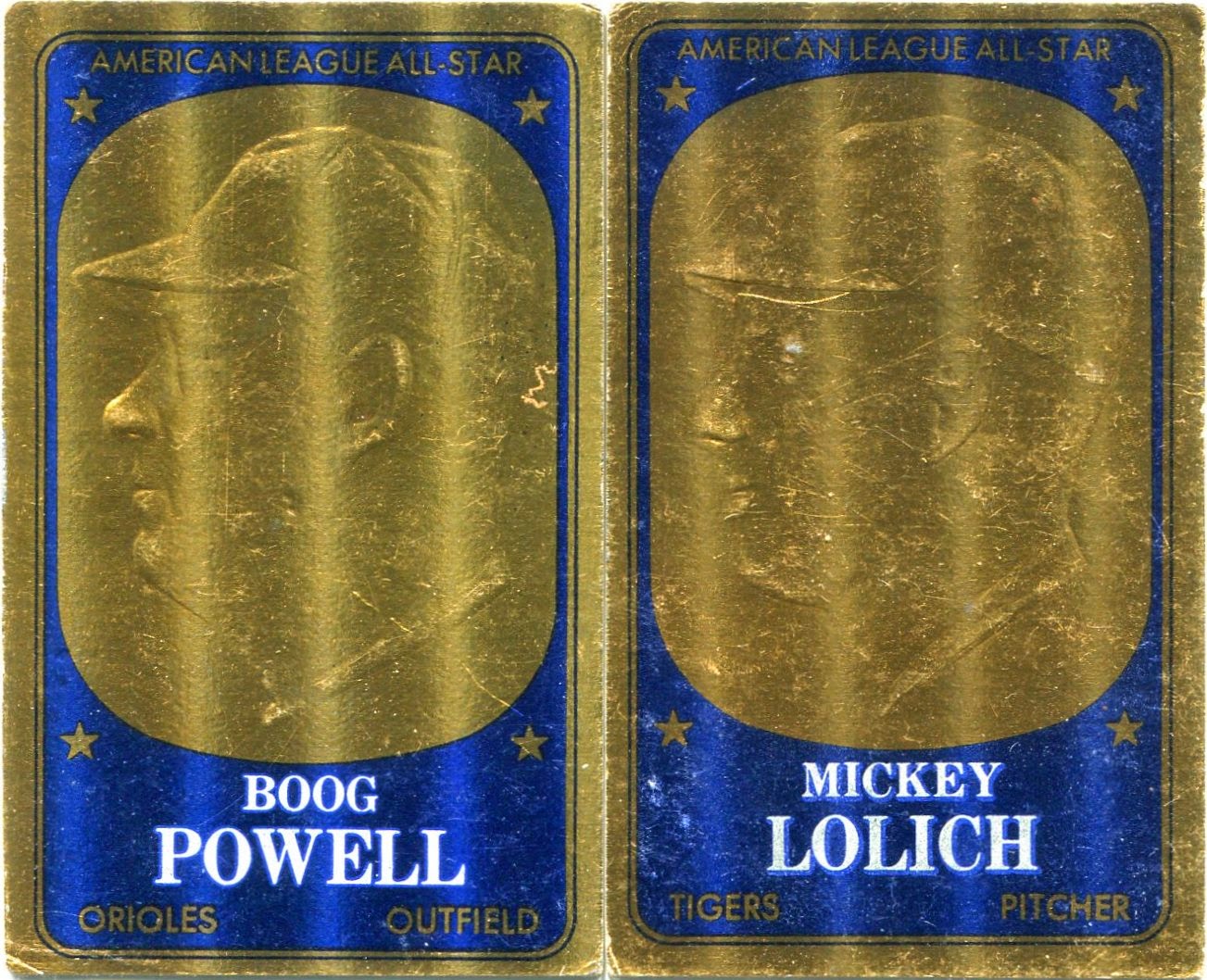 After the Fernandez rookie and the five 5/$1 cards I'd picked out, my tab was up to two bucks.

That's when my eyes wandered over to a stack of 1965 Topps Embossed singles this guy had in his glass case. Again, they were unpriced, but I took a look anyway.

I've never been a huge fan of these. But, hey, vintage is vintage. Right?

Originally, he said he'd be willing to let them go for fifty cents a piece. After I sifted through them, however, he offered me the ten or so he had available for just two bucks all together.

Although I didn't need all ten, I accepted. I figured I could distribute the ones I didn't want in future trade packages.

Besides, the ones I actually did need were easily worth two bucks. 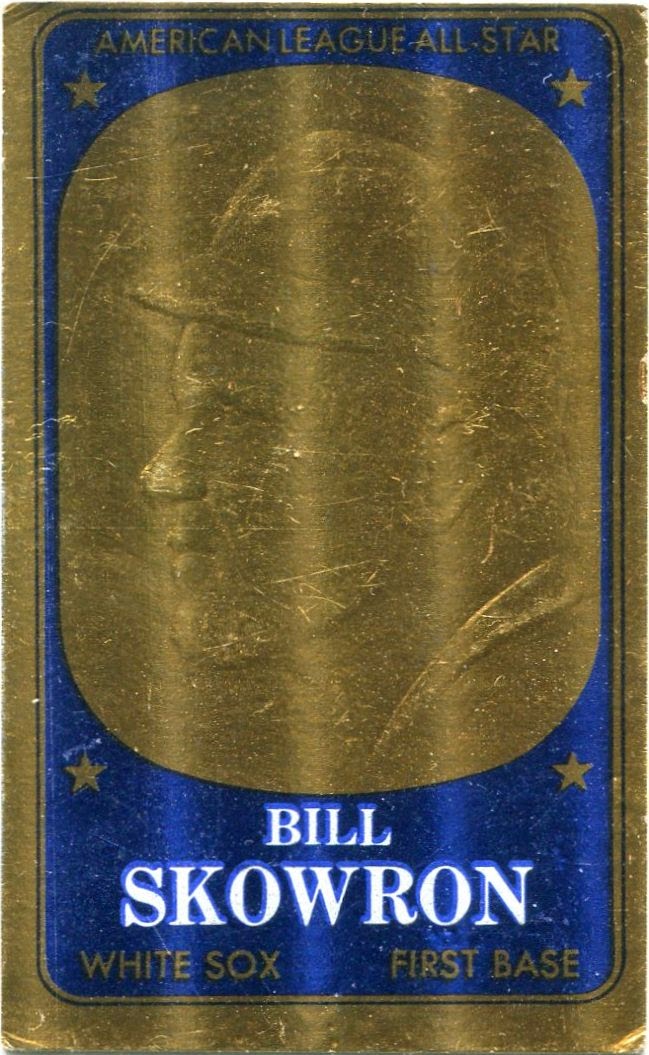 And that's how I basically doubled my collection of '65 Topps Embossed singles.

I spent a grand total of ten bucks on cards from the three vendors I discussed this evening.

Okay, I'll ruin the surprise and say that my other regular vendor was in attendance yesterday. But you'll have to tune into the next edition of "Flea Market or Blaster?" to find out what I scored from his table.

I'll just say that it beat the living crap out of anything I could ever get from a blaster.
Posted by Nick at 6:22 PM

I'd take a flea market over a blaster any day. And I'd be happy to beat up a bunch of my old cards and sell them to you at 10 cents a piece !

Flea market over a blaster any day

Glad you went to the flea market with that 20-spot...lay off the blasters!....haha!

I'm with Baseball Dad. I'm just depressed that I haven't been able to find any good flea market buying here in Atlanta...

Flea market over blaster for sure. Incidentally I just got a whole bunch of dupes of 07 and 08 UD masterpieces, including a full 07 set and multiple singles of almost every 08 card. Do you have any interest in a trade? I was actually thinking of you when I got those cards.

I'm also sure I've got a few cards in the condition of that Manny if you want them as well. ;)

I miss the old flea markets. When we lived in San Diego, they had a great one at the old Midway Drive-in on the corner of West Pt. Loma Blvd. and Midway Drive. Denver had it's iconic Mile-High Flea Market, where I used to sell cards and comics back in the day.

It's probably a good thing you mentioned that you already have that '92 Manny Ramirez card. I was poised to unload abunch of them on you if you hadn't!

You definitely made the right choice.

I never find dime boxes or quarter bins at my flea market. That Manny is epic! I'd put it right under your 65T Embossed singles.

You're right, that is a striking Matt Kemp. Same with the Fernandez. He's been such a fun pitcher to watch develop and cheer for. That he went down, and has gone down with so many others this early in the season...it's such a shame.

Great job at the flea market!

As they stated in Indiana Jones & The Last Crusade..."he chose....wisely."

You never specified which blaster you were considering, meaning that we all must assume you passed on a blaster of 1952 Topps. In which case, you made the wrong choice.

Okay just kidding, you made the right choice.

The flea market always wins over the blaster...and those 92 Post cards are everywhere now!